Tamara Pullman, born as Tamara Hurwitz, is a woman of Norwegian descent who has been married to famous actor Bill Pullman since 1987. The couple has experienced 30 years of happy marriage together. How did they make their marriage stay alive for so long? It is a question many couples would love to know the answer to. Perhaps it is the fact that both couples have a great sense of humor and creative outlet in which to thrive. Tamara Hurwitz is a modern dancer and, as everyone already knows, her husband Bill Pullman is a famous actor with movies such as Spaceballs, A League of Their Own, Casper, and Independence Day under his belt. They have also collaborated on a theatrical dance production called Healing Wars, which played for a time in Washington, D.C. Tamara Hurwitz and Bill Pullman also have three grown children together. They have experienced the joys and bonding of parenthood. However, they are now "empty nesters." Even still, they have managed to stay happy and in love, something a lot of other couples struggle with once their children leave the home.

Drawing from the land .. A reflective moment w the Mama before the hurricane of 9th Rib #9thrib

Above is a photo taken from Tamara Hurwitz's daughter Maesa's Instagram. Mother and daughter are enjoying a nice nature walk in the mountains. Maesa shares her mother and father's creativity as she is a musician herself.

The jamz are like honey butter all over my heart! Last night was a dream and tonight we rise and shine even higher at #chagall in #bergen #norway🇳🇴 COME on out it's SATURDAY !9PM #americana #jam to follow a #maesa set ... see you there beauties! ❣️ #americanamusic

This photo above, also taken from Tamara's daughter Maesa Pullman's Instagram, shows Maesa performing a song and playing guitar with her band. Tamara and Bill have created three very talented children and it is no surprise, given the amount of talent they each possess.

Tamara Hurwitz Pullman and Bill Pullman were married on January 3rd, 1987. Tamara Hurwitz Pullman welcome her first child with actor Bill Pullman a little over a year after being first married, in 1988. The child was a daughter who they named Maesa Pullman. Maesa is also very creative and is a singer and songwriter. She plays banjo and accordion as well. A year later in 1989, Tamara and Bill Pullman welcome their second child into the world, a boy named Jack Pullman. Jack is a puppet-maker. The third child of Tamara Hurwitz and Bill Pullman came in the year 1993. This was also a boy who the couple named Lewis Pullman. Lewis is an actor like this father. Tamara Hurwitz Pullman appeared in the dance drama movie entitled Parables of War, in which her husband Bill Pullman played the role of himself. Tamara's favorite thing to do on a Sunday morning is to go to the Farmer's market, according to her husband Bill. His favorite thing to do, on the other hand, is to prune the garden. Tamara's pet peeve about actor Bill Pullman is that he likes to invite guests over regularly and not tell her about it beforehand. Instead of going out on date nights, Tamara Hurwitz and Bill Pullman prefer to stay in and spend the evening gardening together. When Tamara and husband Bill do decide to go out on the town, they enjoy a night filled with culturally enriching activities, like seeing a dance show, going to a concert, seeing a theater production or going to the museum.

Above can be seen a lovely photo of the happy couple, Tamara Hurwitz and Bill Pullman. They share an embrace and smile for the camera. The two definitely look comfortable and content in each other's arms.

Tamara Hurwitz has a career as a modern dancer. She also is very heavily involved, along with husband Bill, in planning community events. Tamara and Bill appear side by side in a theatrical dance show called Healing Wars. Healing Wars js produced by Liz Lerman's Healing Wars and ran at Washington, D.C.'s Arena Stage for a few weeks in June of 2014. The work of art examines the devastating effects of war and the healing that follows. It is part of the National Civil War project and besides starring husband and wife Tamara and Bill Pullman, features a cast of many other talented individuals, including a war veteran. Besides appearing on stage together, Tamara and Bill Pullman have been known to organize square dances for charity on their large property in upstate New York. They have also founded an organization called Hollywood Orchard in 2010, which is a community initiative that aims to donate extra fruit from other people's trees to those in need. The first year of the initiative is featured in the 2013 documentary movie “The Fruit Hunters.” 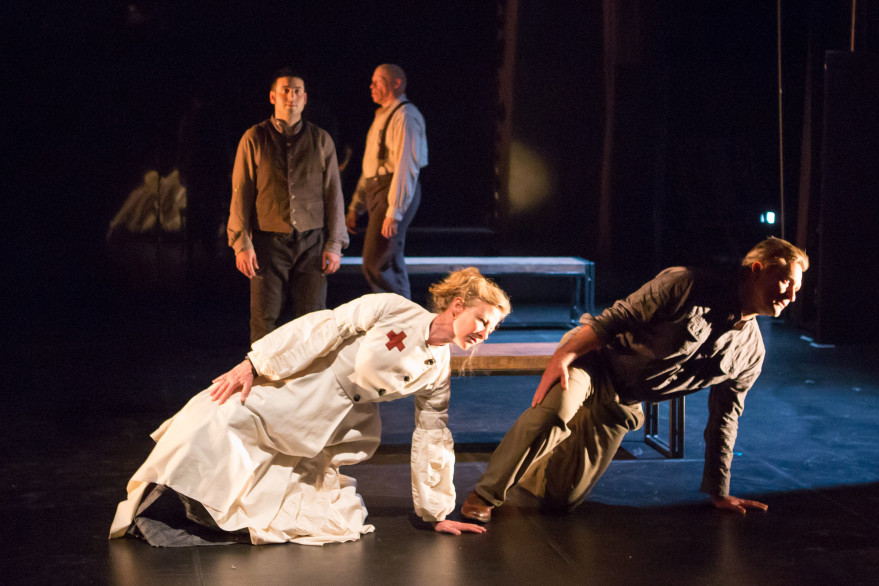 Above is a photograph of Tamara Hurwitz and Bill Pullman appearing the the theatrical dance piece called "Healing Wars" together.

Tamara Hurwitz Pullman is a woman to be admired. She has done wonderful things for her community and in her career as a dancer and has made a beautiful and talented family with husband Bill Pullman. She is an excellent role model for women and we love her for all that she does!