Known as the "Sleepless Town," the famous red-light district of Kabukichō, Tokyo is the go-to destination for the curious traveler. You could have an unusual meal with robots, please yourself at a sex parlor, "order" a Japanese girl via an iPad, relax at a shrine or learn something from a museum – it is a complete itinerary.

A red light district typically has the connotation that the activities it offers risqué, sexual and under the radar, hence something you might be ashamed about; but in Japan, it's actually more of a culture and tradition. There is a thriving underground industry right at the heart of one of Japan's busiest districts and it's completely legal.

Add These 9 Activities to Your Tokyo Red Light District Itinerary 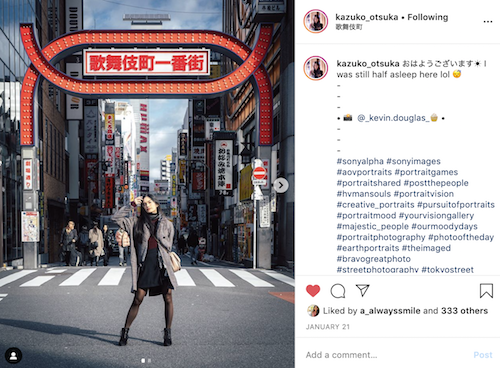 While there's many more things to do in Kabukichō, we've listed down the most popular ones below. Get ready for a journey, unlike any other.

This is the first clue that shows you've entered the red light district – good-looking young men on the streets, approaching young women and enticing them to join the club as patrons or offering them an opportunity to work in the entertainment industry. There is no sex involved in being a host or hostess. As a client, it is their job to make you feel loved and appreciated by having their undivided attention on you.

It may seem like an expensive endeavor to have someone flatter you, say he loves you and help you escape reality for a few hours but this is the industry that caters to the rich and unsatisfied. How expensive? Around $100,000 a night if you're a regular and have a solo host to yourself. Regulars could develop more intimate relationships with their host or hostess and could even shower them with material gifts.

Fortunately, the first visit is cheap, around $60 for an hour or two at the club. Hosts will rotate every 15 minutes and you could pick out one to monopolize, of course, the bill starts to pile up from there.

2. Stay at a love hotel or sex parlor 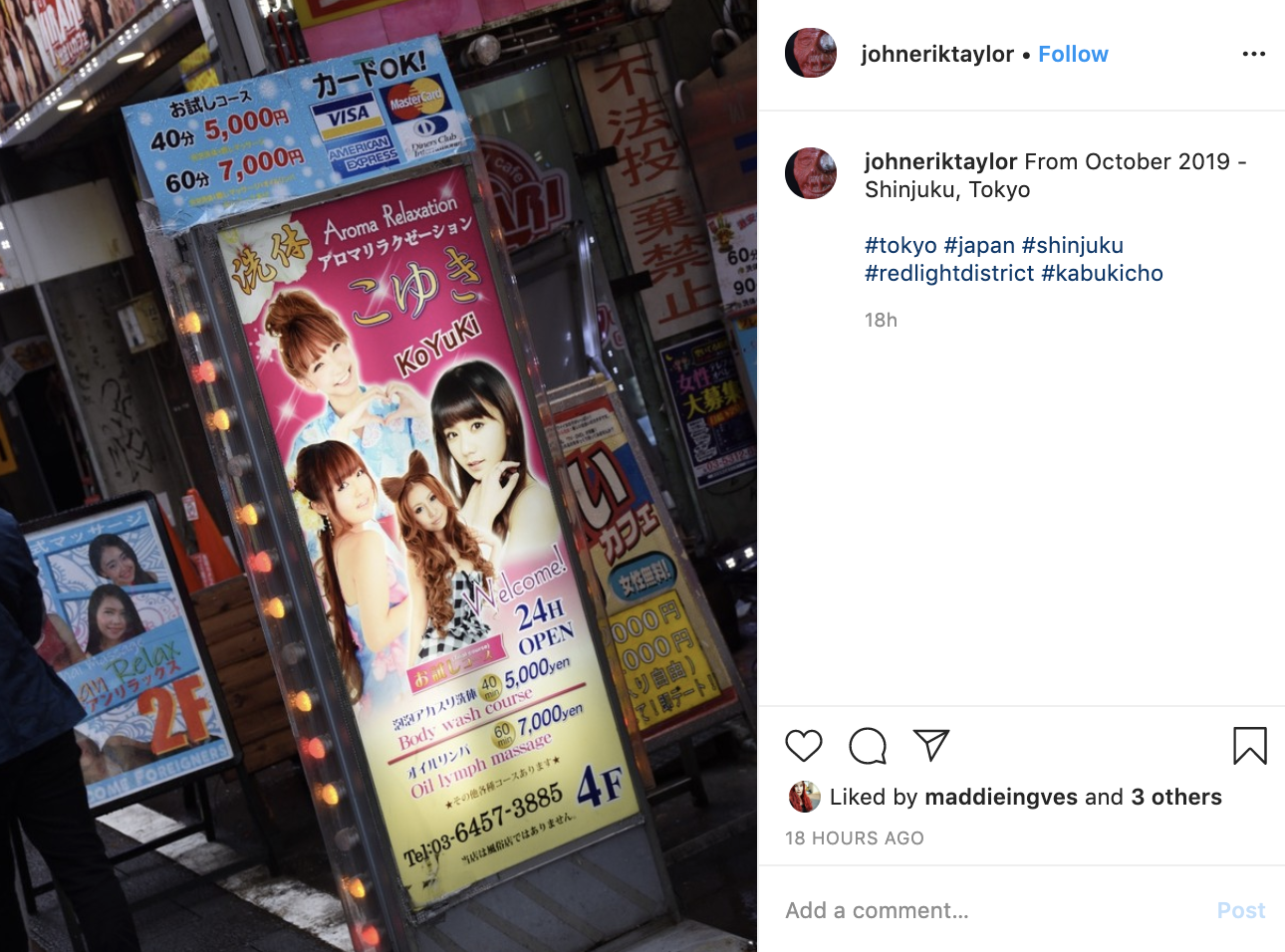 If you want to go for something more private, a love hotel (Japan's version of a motel but with so much more character) or a sex parlor are your options. A rabuho, or love hotel, is hard to miss, with its bright neon lights and gaudy décor. It's a great choice for couples who want some privacy and expect an unforgettable experience with their surroundings. Rates usually start at $30 for two to three hours "rest" or $70 for an overnight "stay."

3. Dine at the Robot Restaurant

Make a reservation at the Robot Restaurant
Source: shinjuku-robot.com

Get ready for your eyes and ears to be assaulted with the music and color at the Robot Restaurant. And because this is the Red Light District, you can also eat as you watch scantily dressed girls lap dancing and gyrating robotic creatures. The entrance fee is around $80, and a meal will cost about $15. 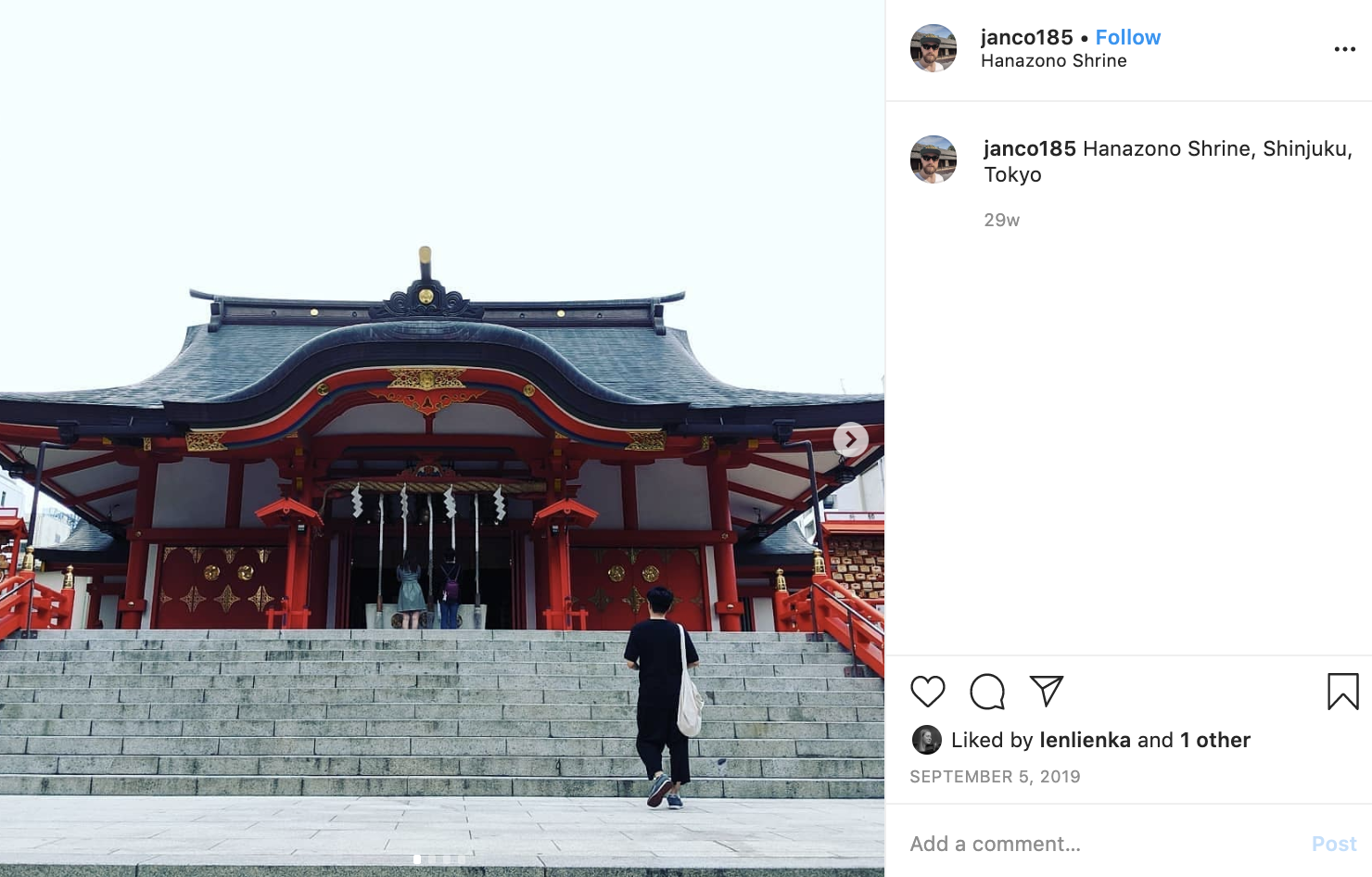 Considered as the most important shrine in Shinjuku, the Hanazono Shrine is a nice escape from the lights with its calm and serene atmosphere. It is believed that the shrine, a dedication to the god/goddess of trade and worldly success, Inari Okami, guards everyone in the area. Watch the alley leading to the shrine come to life with stalls showcasing local delicacies and souvenirs whenever a festival is held.

5. Learn something from the Samurai Museum

This is the place to go to if you're with family and are into the rich history of samurais. The museum holds guided tours which cost around $18 for adults and $8 for children, where you can discover everything about samurai armor, weapons, and traditions - all 800 years' worth of samurai history. You could even try on some costumes and harness your inner warrior. 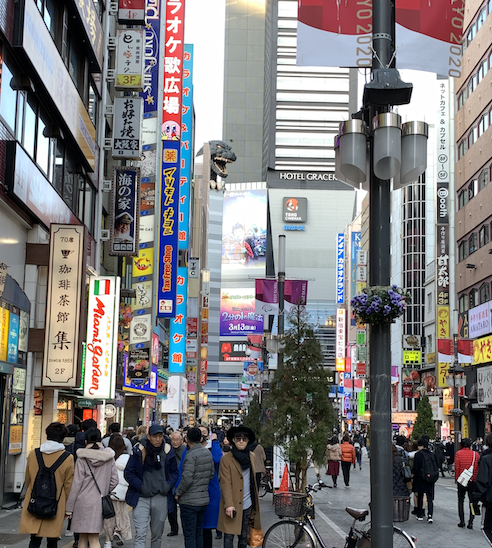 Getting to Godzilla's head
Source: Google.com

It's not every day when you gaze up a towering building and see one of Japan's most iconic characters peeping out at you. A life-sized bust of Godzilla watches over the Kabukichō area. Stay awhile and see it light up, hear its roar and watch the steam come out of its mouth, mimicking his fireballs.

7. Escape the hustle and bustle at Golden Gai 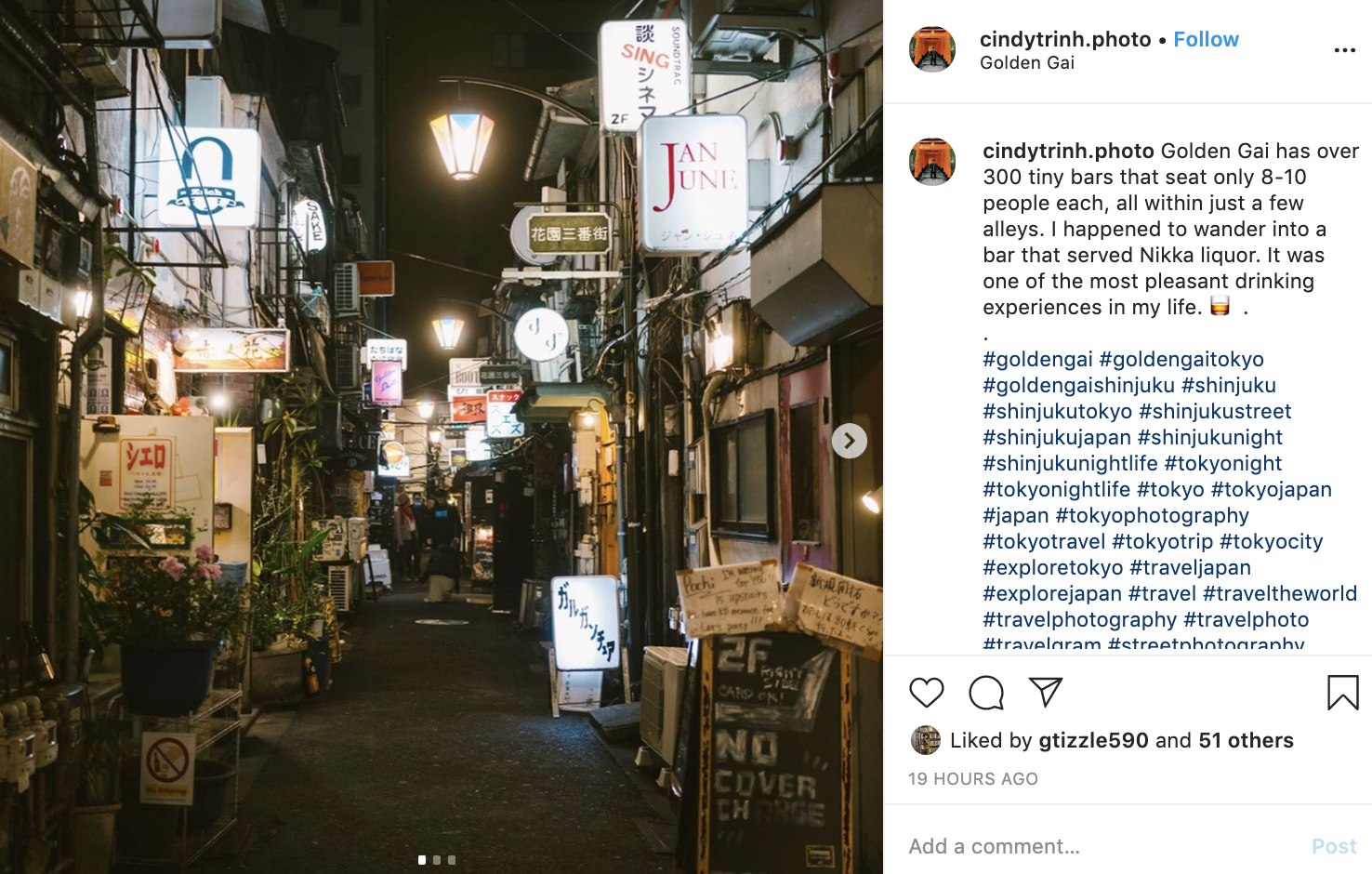 This is one of Kabukichō's most popular drinking spots where you can go bar hopping and wander around the quaint, picturesque streets. You won't have any problems choosing where to make a drinking stop because there's over 300 to choose from. The only thing to worry about is splitting up if you're a big group because most bars only have less than ten seats available and you could pay up to $10 for one. This is why the most preferred option in Golden Gai, if you're not a regular, is to go for a bar crawl and drink on the way to another bar. 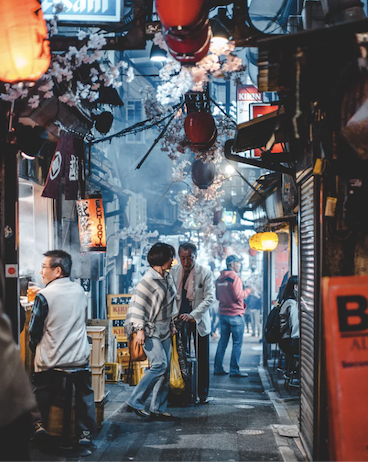 If you're up for another stroll, how about Piss Alley, also known as Memory Lane. This is the darker, dirtier and more food-oriented (expect a lot of unidentifiable skewers) version of Golden Gai. It's logically the next stop after bar hopping, and you're drunk but still have enough energy. You can't exit Piss Alley without making at least one new friend, getting into a scuffle with another intoxicated individual or barfing at a street corner.

9. Get weirded out at Lockup

Last, but not the least, some brains and eyeballs for dinner because we never said Kabukichō wasn't weird. At Lockup, another popular theme restaurant, you will get your fill of gore and horror, with zombies or monsters attending to your prison-like table, alarms and sirens going off, and food creatively being served in skulls or test tubes. A meal ranges from $30-$50 per person.

If you're super hyped up by now or totally scared of stepping foot into Tokyo's The Red Light District, below are a few tips to ensure you stay safe or become convinced that it is safe to enjoy.

Don't get ripped off 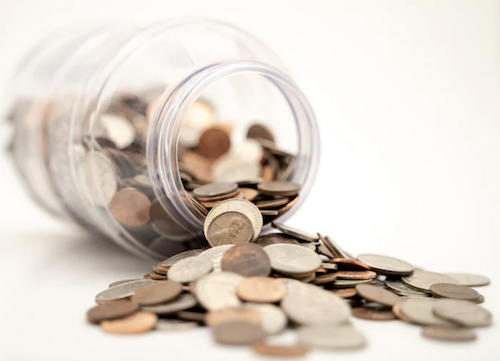 It's common to be promised cheap prices by an agent at the club entrance only to be surprised at all the extra fees leading to a staggering bill total. There have been cases where customers were promised an entrance fee of $15 but ended up paying an additional "surcharge" of $20 for first-time visitors. If hidden fees are a pet peeve of yours, it might help to ask them in advance if there would be any and do a quick computation of the expected total.

Another rip off happens with the photos of the young, gorgeous, and voluptuous girls being offered at the front but are a few decades older in person. It's a typical false advertising strategy being implemented to attract customers. 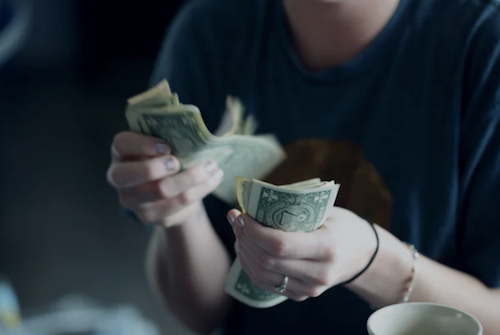 At the end of the day, don't be too shocked when you spend hundreds of dollars because you are in one of the most expensive areas in one of the world's most expensive cities. Perhaps coming in with an adjustable budget would be a better approach so you could enjoy the night instead of continually adding up prices.

Visit with a Japanese friend 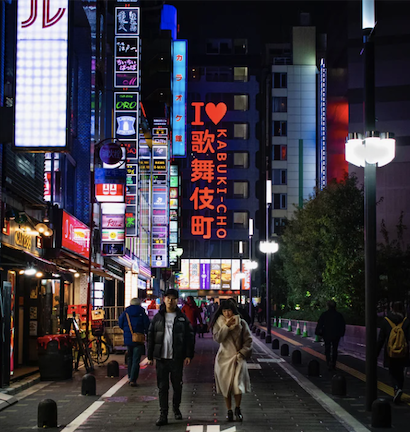 Although Japan is a foreigner-friendly country in general, Kabukichō might be considered an exception. The reason for this is that most businesses there cater to the salarymen in need of some entertainment and relaxation. You will stumble upon some bars who don't allow foreigners at all to "maintain" the atmosphere for their regulars.

With that said, it's highly advised to go with a local or Japanese-speaking friend so that language won't stop you from having fun or getting ripped off. If this is not an option, not to worry, there are still spots that welcome foreigners, although it might be a bit more challenging to find.

Related Article: Bangkok Nightlife Wiki: Read This Before You Go Head In! 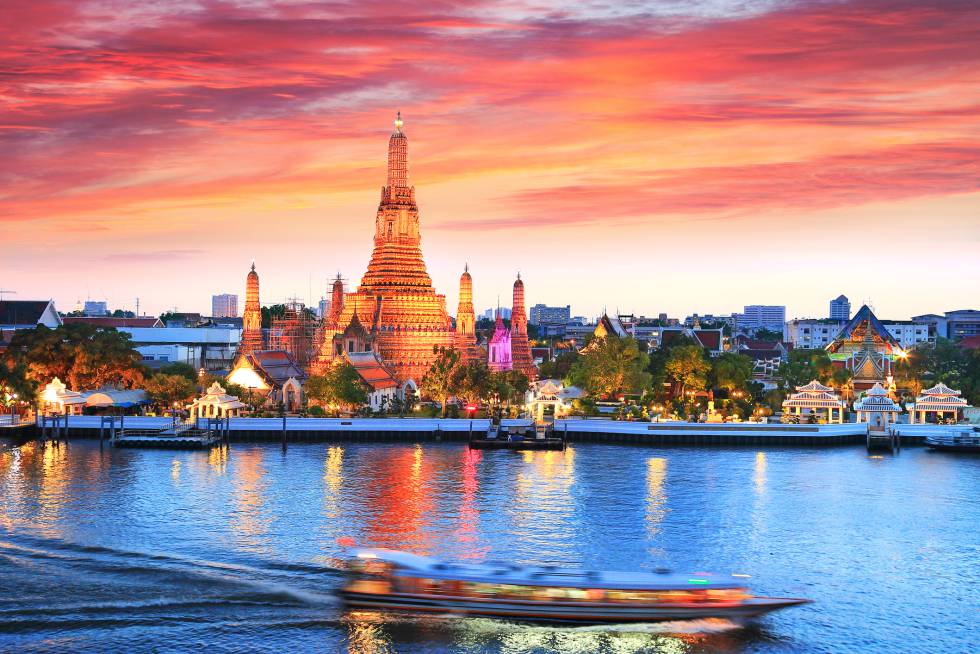 Get to know what's around, dos and don't to enjoy your time! 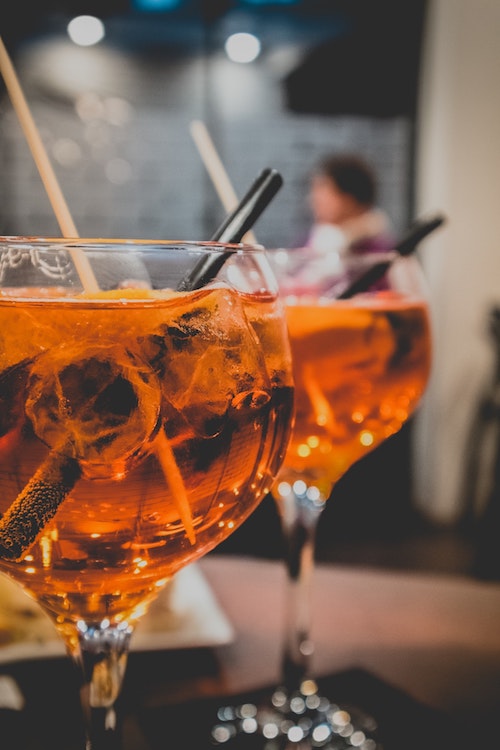 The Red Light District may seem daunting at first, but it holds a lot of potential in providing you with unforgettable memories. Regardless if you go with your special someone, friends or alone, you're bound to have fun and get your appetites, both physical and sexual, fulfilled.