Getting to know the Infamous Red Light District 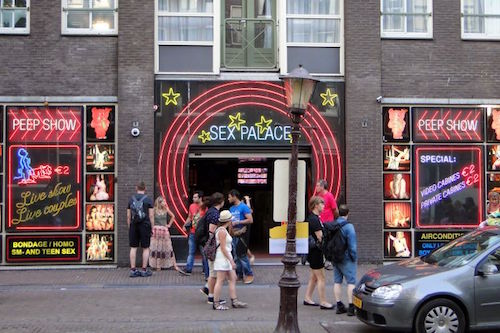 What is the first thing that comes to your mind when you think of Amsterdam? Is it the Red Light District? Have you been there? Would you like to go and find out if all the things said about it are true? Well, they probably are, but Amsterdam Red Light District is so much more than brothels and sex shops. It could be a fascinating experience because there you'll find a little bit of everything.

What exactly is the Red Light District? This infamous and very popular, among tourists, part of Amsterdam is also known as De Wallen (by the locals). It is the oldest neighborhood in the city and is located in the center of the Dutch capital, just a short walk from the Central Train Station. The Red Light District consists of a labyrinth of medieval alleyways on and around the neon-lit canals.

A little bit of history

Since it's one of Amsterdam's oldest neighborhoods, there is some interesting background to the Red Light District. It dates back to the 16th century. Amsterdam was a major trading harbor since the Middle Ages and by that time the Catholic government was being thrown over by Protestants. They decided to transform the district and so it became a place for nightlife and entertainment for the many sailors passing through Amsterdam.

The city of Amsterdam became a magnet for prostitution. Women carrying red lanterns (that kind of light was very flattering), walk the harbor and met the sailors there. The district then was flooded with bars, clubs and slightly indecent entertainment venues. Prostitution wasn't legal by that time, it only became legal in 1810 and the brothels were legalized until 2000. 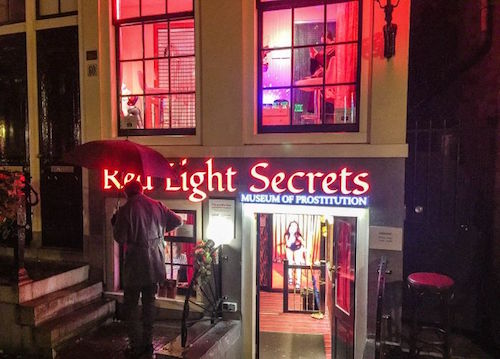 To keep the neighborhood safe, the city council has made some changes over the years. Since 2007, they have taken measures to reduce the number of red-light windows, This was an effort to clean the district of pimps, human traffickers and money launderers (all this is not legal). They also had a project to encourage art galleries, fashion studios, and coffee shops and any other creative enterprises to set their business in the district. This was called Project 1012 (the area's postal code).

Also in 2013, the minimum age for sex workers was raised from 18 to 21 and it was mandatory that the red-light windows closed between 6 am to 8 am.

This peculiar neighborhood of Amsterdam is much more than the red windows, it has a lot to offer. You may be surprised by all the things you can find in the Red Light District. It is famous because of the red-light windows and sex shops but you can also find museums, coffee shops. and even a church.

If you haven't been there and want to visit, then keep reading because here are 7 things you'll find in Amsterdam Red Light District that can make your visit quite memorable.

1. The Oldest Church in Amsterdam 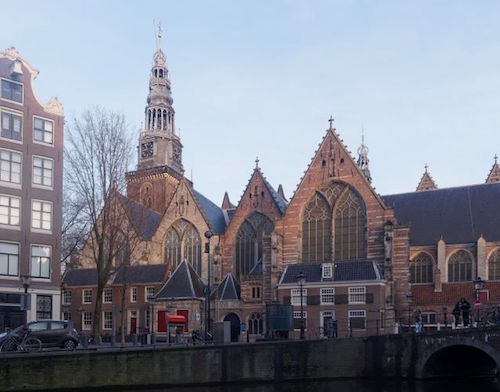 What do you know? There is a church in Amsterdam Red Light District. Actually it's the oldest building in the Dutch capital. You don't want to miss and won't be able to because it's an architectural masterpiece. Oude Kerk was built in the early 1300s and was originally owned by the Catholic church, it was seized by the Calvinist in 1578 and was converted into a Protestant cathedral. Nowadays, this church welcomes all faiths and religious ceremonies are organized there with regularity.

It's also the home of some impressive art collections that you wouldn't want to miss. You can also take a guided and paid tour up into the tower bell of the church. The climb to the top is steep but once there, the view of the city is something else.

2. All kinds of Museums 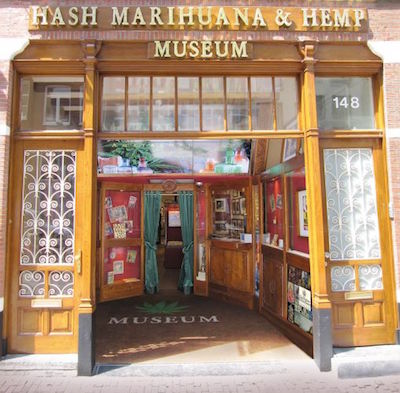 If you're into Museums, you'll find quite a few in the Red Light District. For example, if you're into archeology, you should go and visit the Allard Pearson Museum. This museum, run by Amsterdam University, holds Greek, Etrian and Egyptian artifacts. You should check the museum's website to check the exhibits currently on.

Cannabis is legal in the Netherlands, so if you're interested in knowing more about the use of cannabis and hemp you should definitely visit the Hash Museum. You'll find it fascinating.

If you're curious about the history of Prostitution in Amsterdam, you have to make a stop at the Red Light Secrets, the only museum of prostitution in the world. Here you'll be able to learn about Amsterdam's history with prostitution and you'll be granted a look at what's it like to be a window worker. 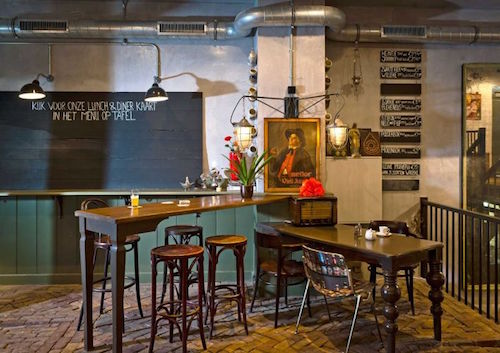 Right in the middle of the Red Light District, you'll find a very down-to-earth brewery and taproom called Brouwerij de Pael. Apart from offering great beer, the brewery makes very specialty ales and pilsners that you'll enjoy in a very relaxed atmosphere. You will not regret making a stop there to savor a beer and have a good time. 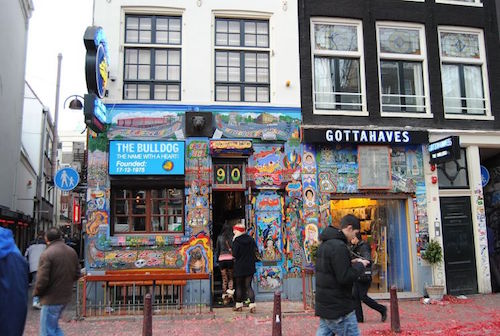 You can't go to the Red Lights District and not enjoy a coffee shop. Now before visiting one, you need to know that you'll not only find coffee and pastries there. Coffee shops are an integral part of the Amsterdam Red Light District. They started popping in 1970 and now they are immediately paired with Cannabis dispensers.

The Bull Dog is one of the first coffee shops opened in Amsterdam, and the first one in the Red Light District so, if you're into experiencing smoking, you should definitely go there but be sure to ask the staff for recommendations and don't overdo it.

If what you really want is a cup of joe, then you should visit a koffiehuis. there you could enjoy a cup of coffee and some desserts. 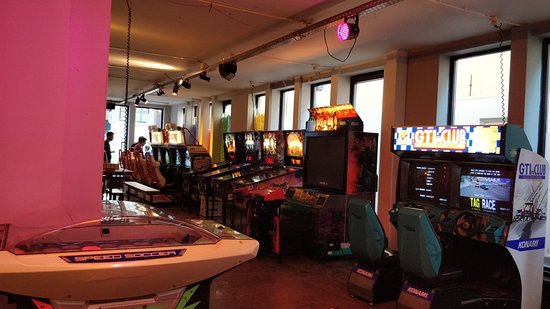 In the mood to play some classic arcade games while on the Red Light District? Then you should head over to The Ton Ton Centrum, and eccentric "barcade" where you can relive the glory days of coin-op video games. They offer around 20 of these vintage machines from the golden ear of joysticks, light guns, and super pixilated graphics. It's perfect for all the nostalgic gamers of the 16-bit era. Apart from being able to play "Virtual Fighter" and "Time Crisis II" you can enjoy their craft beer and some delicious snacks. 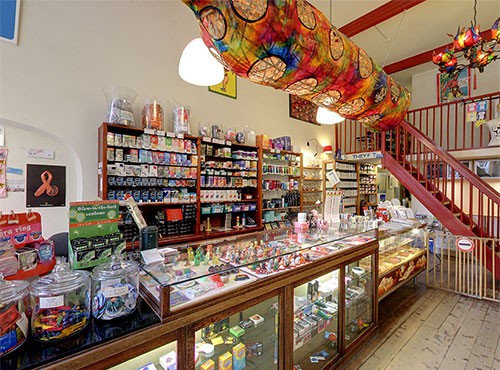 You should visit The Condomerie, a novelty shop founded in the 1980s to promote safe sex during the AIDS crisis. If you spot a crowd of onlookers outside its doors is because they are taking pictures of the displays inside the store (you're not allowed to take pictures inside). The Condomerie was the first condom specialist store in the world and they sell them in all shapes and sizes, they also have an information center offering advice for safe sex.

7. A coffee bar inside a church 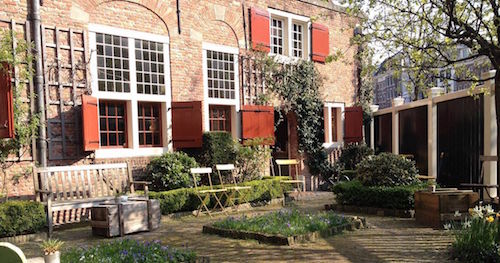 Here you actually can enjoy a cup of coffee. De Koffieschenkerij is a coffee bar located inside Oude Kerk, inside you'll feel like worlds apart from the hubbub of the Red Light District while being in the middle of it. They established this coffee bar in the former church's sacristy. In De Koffieschenkerij, apart from serving a delicious specialty coffee, they offer breakfast every day and light lunches and an apple pie that's to die for.

If you're visiting the Red Light District for the first time, here are some recommendations of dos and don'ts. Follow these guidelines and you'll enjoy this experience more.


Related Article: Learn the Essential 10 DO’s and DON'Ts with a Sex Worker 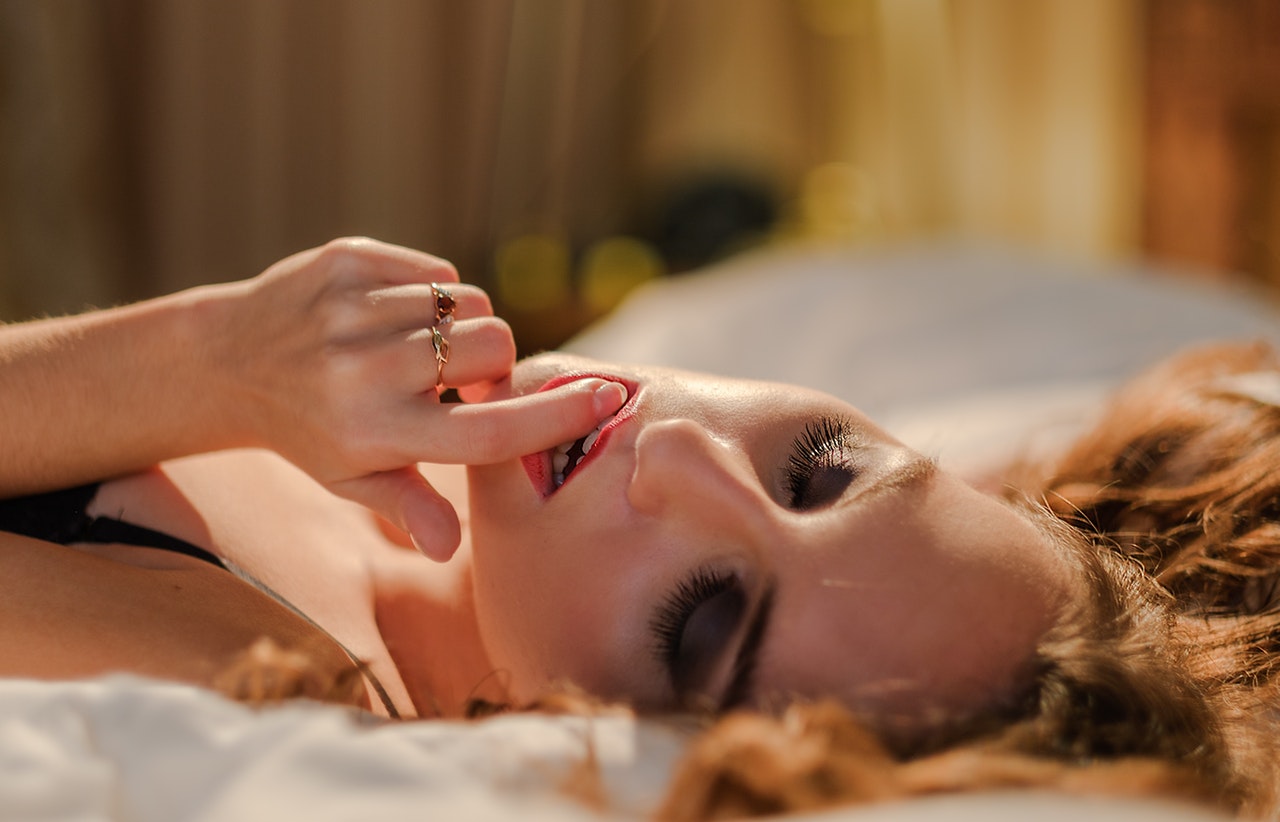 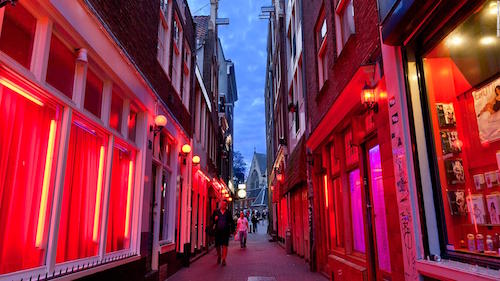 Amsterdam Red Light District is definitely a must to experience while you're in the Dutch capital. There are tons to do and find there. Be sure to check all the recommendations above. We hope you have a great time.