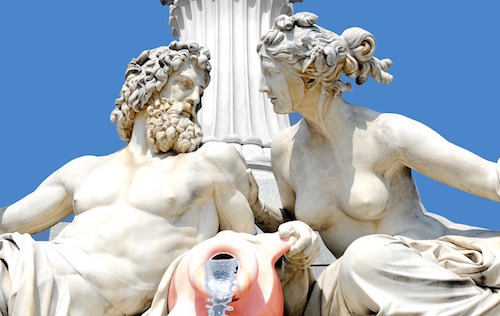 Human societies incubating ideals of beauty and feeling an affinity towards this social construct is a tale as old as time itself. These ideals are often founded in the mythologies created by these societies and one can find many such examples in Greek, Roman, Mesopotamian and other myths and legends. Just like the Olympian gods, but with a few exceptions, the ancient Greek goddesses resided in Mount Olympus as well. These goddesses with their own fascinating stories are truly forces to be reckoned with in Greek mythology but the Greeks are not the only ones to have constructed goddesses of beauty and the following list includes goddesses from a variety of different ancient societies.

Why Do People Worship Beauty Goddesses? 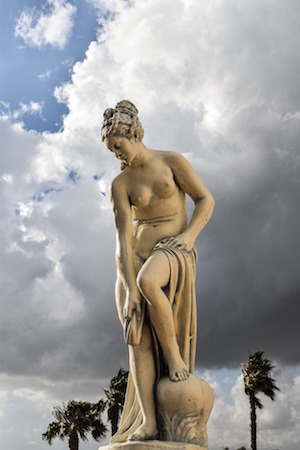 Since the beginning of time, people have worshiped either what they have deeply valued or what they have deeply feared – in both instances; it is the power that is worshipped. Deities constructed by people often represent discourses that are meaningful to societies and beauty is a discourse that most societies actively involve themselves with and place great value. It makes sense then, that the ancient Greeks constructed a mythology of the feminine in all its colors and wonders embodying ideals of feminine beauty and power in the capacity of motherhood and sensuality among others. We see many goddesses feature heavily in varied mythologies each with a fascinating story of their own.

The List of Names of 10 Beauty Goddesses and Their Stories 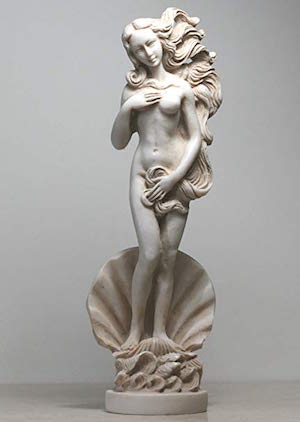 Aphrodite, perhaps the best-known Greek goddess of beauty, is thought to be the epitome of physical beauty, love, fertility, and pleasure. There are many legends surrounding her birth but the most popular one suggests that she was born out of sea foam in a sea shell like a pearl in an oyster shell. This iconic scene is illustrated in Sandro Botticelli’s, The Birth of Venus. The mother of Eros (Cupid), Aphrodite, is associated with symbols that include doves, roses, sparrows, myrtles and swans. The term "aphrodisiac" has also been directly derived from her name.

Despite the legend of her stunning beauty, however, nothing good came out of stories surrounding the myth of Aphrodite. She is known to have started the Trojan War by promising, Helen of Troy, the most beautiful mortal in the world, to Paris in exchange for the title of the “Fairest Goddess of the Land.” She was also involved in ill-treating her son Eros’s mortal lover Psyche and many other scandals up on Mount Olympus. 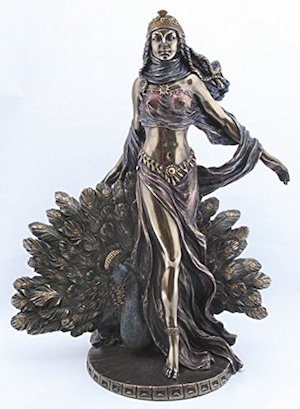 No list of goddesses is ever complete without mention of Hera, the Queen of the Gods, and wife to Zeus. Hera was the Goddess of Women and Marriage and was considered a true Olympian Goddess of unparalleled beauty. So much so that she went toe to toe with Aphrodite in attractiveness. She took the side of the Greeks over the Trojans in the War because Prince Paris selected Aphrodite over her as the Fairest Greek Goddess. A claim we know Aphrodite maneuvered through the promise of Helen of Troy.

She, too, much like Aphrodite, played a negative role upon the Mount Olympus in castigated Zeus’ many mistresses and inflicting misery upon her many stepsons and stepdaughters. Hephaestus, her own son, was exiled from Mount Olympus for the unforgivable sin of being unattractive and deformed. She is also alleged to have sent snakes to the crib of Heracles, Zeus’ son with a mortal woman. 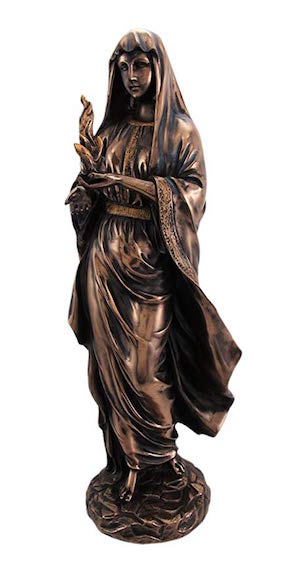 One of the first and oldest Greek goddesses, Hestia was the goddess of the hearth and the sibling of Zeus, Poseidon, and Hades. Hestia was one of three virgin goddesses – the other two being Athena and Artemis. Despite being pursued by Apollo and Poseidon relentlessly, she kept her oath to Zeus to remain pure and undefiled and represents chastity, the highest virtue of womanhood known to ancient society. She symbolized the beauty of the warmth radiating from the burning fire of the hearth and the divine trace of tranquility in domestic life. 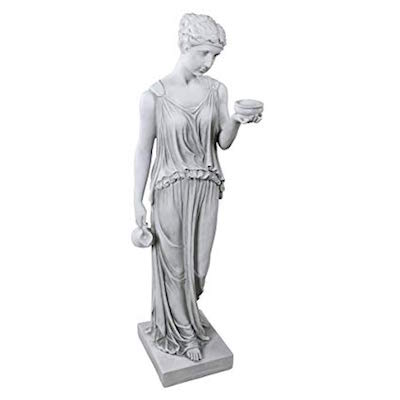 Zeus’s youngest daughter, Hebe, was considered the divine personification of everlasting grace and beauty. Her name itself means “youth” in the Greek language and she represents feminine grace and charm to ancient Greeks. It was believed that she could restore youthfulness to the old. She was also tasked with keeping the Olympian gods immortal by serving them nectar of immortality – one of many domestic chores she was involved with upon Mount Olympus. She was also a handmaiden to Hera and involved in the building of the royal chariot. Later on, she married Hercules and bore him two children. 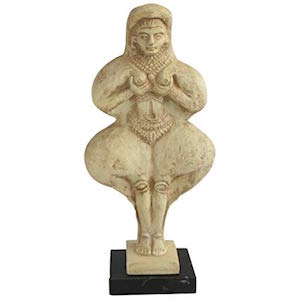 Inanna, the “Queen of Heaven,” is a Mesopotamian goddess representing love, beauty, sex, justice, war, and political power. She is the Mesopotamian equivalent of Aphrodite and is associated with the planet Venus, just as most goddesses of beauty. Her most prominent symbols include the eight-pointed star and the lion.

Despite being regarded as a virgin goddess, Inanna was responsible for love, lust, and procreation. She was also believed to have stolen themes, representing all positive and negative aspects of civilization, from the god of wisdom and many legends about her are associated with the usurping of domains of other gods and goddesses.

Hedone was the goddess of love, pleasure, enjoyment, and delight. She was born as a result of the union between Eros (Cupid), son of Aphrodite, and Psyche, his mortal lover. The term “hedonism” is derived from the Goddess Hedone and underscores the lust, sexuality and feminine beauty that Hedone encompassed. The corresponding goddess in Roman Mythology is Voluptas. Hedone would reside in the Tempel of Himeros but would seldom be found there. Instead, she was always wandering in human towns, armed with a perfumed torch of Love and myrtle that she would use to induce delight, profundity, and ecstasy on people. She also had many mortal lovers. 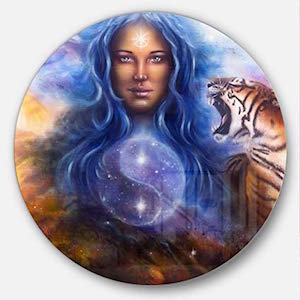 In Slavic and Baltic mythology, Lada is a goddess associated with beauty and fertility. She also has a masculine counterpart, Lado. They are frequently mentioned together in songs related to planting, weddings and harvest time. The name Lada is derived from the Russian word lad, which means harmony, union, and peace. Lada is closely related to other deities whose aspects relate to the Sun, grain, and water.

In Russia, between the fifteenth and eighteenth centuries, Lada and Lado were worshiped during springtime fertility rites. 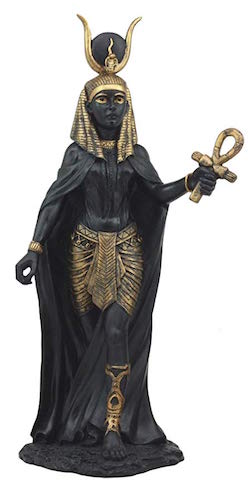 In ancient Egyptian religion, Hathor was a very important deity who had many different roles. She was the wife of Ra, the Sun-god, and, consequently, the symbolic mother of the pharaohs. Her soft side represented dance, music, joy, sexuality, love and maternal care. However, she also served as the Eye of Ra, which gave her a vengeful side, as well, as a protector of the Sun god.
In this duality, of softness and strength, she embodied the Egyptian conception of femininity. Hathor is associated with the symbol of the cow, as a reference to her maternal side, but her most common form is a woman wearing cow horns. She was also represented as a cobra, a lioness or a sycamore tree. 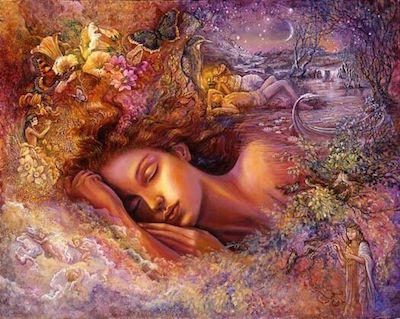 Voluptas, in Roman mythology, is the daughter born from the union of Cupid/Eros, son of Venus with his mortal lover, Psyche. Voluptas was conceived before their union and was a force of beauty and love to be reckoned with despite extreme disapproval of her paternal grandmother. She is often found in the company of the Three Graces, and she is known as the goddess of sensual pleasures, the name Voluptas literally meaning pleasure or delight. The equivalent goddess in Greek Mythology is Hedone. 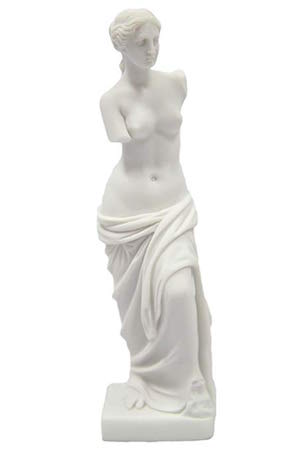 Venus is a Roman goddess, encompassing love, sex, desire, beauty, fertility, and prosperity. She is the Roman equivalent to the Greek Goddess, Aphrodite, and the Mesopotamian, Innana. In Roman mythology, Venus was the goddess of chastity despite ironically having quite aa few illicit love affairs. She had two main divine lovers: her husband Vulcan/Hephaistos and the God of War, Mars/Ares. Venus and Mars are alleged to have been cunningly trapped in a bed with a net by Vulcan; which is why Vulcan and Venus’ marriage was loveless and they had no children. The goddess of fertility, however, was in no way childless; Venus had many children from different gods. With Mars, she gave birth to Timor, the personification of fear, his twin Metus, the personification of terror, Concordia, the goddess of harmony, and the Cupids who were a collection of winged deities representing love.
Related Article: 12 Tips To Bring Out Your Inner Warrior Goddess