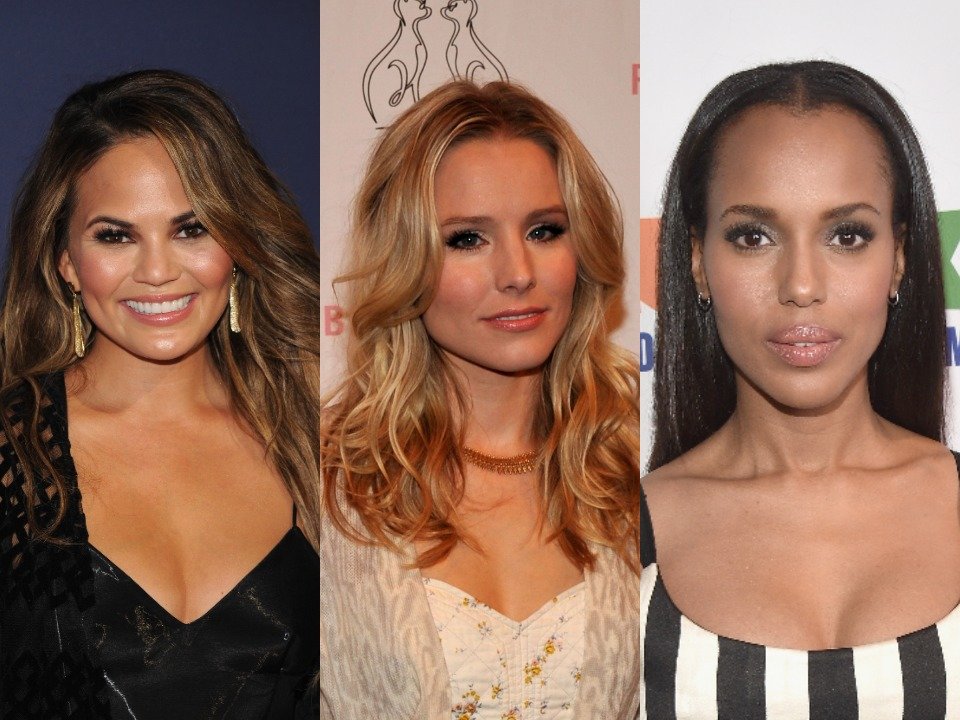 Celebrities have a huge power in their hands, they are in a position to express their points of view about a lot of issues and be heard by a lot of people. One of those issues is a body-positive image.

Celebrity Moms get a lot of critique about their body image especially during or after a pregnancy. So recently a lot of them have been using their platforms to speak out about this issue. They are fighting back against unrealistic expectations placed on women about the body image.

If you want inspiration about feeling great and empowered with your body image, keep reading because we compiled some quotes of celebrity Moms that we like to share with you.

Kate Winslet is an Oscar-winning actress who is proud to be imperfect (to me she looks great). She is 43 years old, has had three kids and has a no-nonsense attitude about body image.

She said in an interview with the Daily Mail in 2008: "I've had two kids. I'm 33. I don't look in the mirror and go: 'Oh, I look fantastic!' Of course, I don't. Nobody is perfect. I just don't believe in perfection. But I do believe in saying: 'This is who I am and look at me not being perfect.' I'm proud of that."

She is one of the celebrity moms that has spoken about positive body image and has stated that is important to love your shape.

'As a child, I never heard a woman say to me "I love my body". Not my mother, my elder sister, my best friend. No one woman has ever said, "I am so proud of my body". So I make sure to say it to Mia because a positive physical outlook has to start at an early age.'

We can get on board with this quote right? Embrace a positive body image and share it with your kids.

Kelly Clarkson is an amazing singer and she always keeps it real. She has two kids and is a constant target for body-shamers, but you know what? She has chosen not to be obsessed with it.

She accepts that body shamming celebrity moms, especially after pregnancy, is part of the industry she is in, but she hasn't let it define her. She likes who she is right now and has a lot to be happy about, especially her family.

This is what she said in Cosmopolitan: "I'm the happiest I've ever been and I can't even believe my life sometimes. I'm so fortunate, and that's what I focus on."

After she gave birth to her second child, she addressed the issue again, she got very real and this is part of what she said

"This is real, and this is what's happening right now, this is what I'm rocking. I'm just gonna do me and I'm gonna go at my own pace and I'm gonna do my thing and if I'm skinny one day or bigger one day, that ain't gonna change how I sound. I still sound pretty dang good."

thank you to everyone who came to our amazing #BECCAXCHRISSY booth at #sephoria!! Loved meeting you guys and showing you my new cravings-inspired holiday kits!! @beccacosmetics love you guys!

The model Chrissy Teigen is one of the celebrity moms who has embraced the #nofilter lifestyle. There was a photo who made the rounds on social media where she highlighted her stretch marks. While a lot of women would make anything to hide those imperfections, she embraces them.

When asked about the famous photo, this is what she said in Refinary29: "I was actually just taking a picture of the bruises and then I saw the stretch marks in there. I have those apps The Facetune and Photoshopping ones, and I just didn't feel like doing it anymore -- and I'm never doing it again because I think we forgot what normal people look like now."

Chrissy, we totally agree with you, well said!

This is what she had to say about it: "Bodies change. Bodies grow. Bodies shrink. It's all love (don't let anyone tell you otherwise)." Don't be ashamed of all the changes in your body, they're all natural, embrace them, and get on board with this hashtag by Anne #lovewhatyoubeengiven

Straight from the garden- for my baby girl. #byebyefirstgrade✌🏽 #proudmama

You have to love Pink, she is a force to be reckoned, always defending women and not being afraid to speak her mind. She is confident and strong, has a great voice, she's the mother of two and, as she has stated, very happy with her life.

So when she was criticized about the way she looked in some red carpet, after she had her first child, she responded saying this: "I can see that some of you are concerned about me from your comments about my weight. While I admit that that dress didn't photograph as well as it did in my kitchen. I will also admit that I felt very pretty. In fact, I feel beautiful."

Who doesn't love JLo?! She can do anything! She sings she acts, she dances, she's an entrepreneur and a mom of twins! She's one of those persons that like wine, gets better with age. But that doesn't mean that she's perfect, as she has stated, she also deals with body image issues.

Jennifer has spoken about a positive body image. When asked about it in an interview, she said this: "I remember thinking I wasn't thin enough because I have curves. But I've learned that being healthy and feeling great aren't about one specific body type; it's a completely individual thing."

So ladies don't compare yourselves with anyone, and if you feel your "confidence is lagging" do what JLo does and DANCE! You'll love it!

Beyoncé or better know as Queen Bey feels strongly about female empowerment. This curvy celebrity mom is a great performer with a spectacular voice and killer moves. She's the mother of three and as perfect as she may seem on photos and on stage, she has struggled with body image too.

In her short film Your and Mine, she preached about it: "We do not valued ourselves enough. Especially young people, (who) don't really appreciate, how brilliant our bodies are."

What do you think about that? Brilliant right?

Blake Lively is a very beautiful and talented actress, mother of two girls. She had to film a movie (The Shadow) just 8 months after having her first child! How did she manage to look amazing in such a short time after delivering?

Well, as she told The Sun in an interview "It's not normal to look like that eight months after having a baby". She did it with a lot of help, two personal trainers and a nutritionist. Still, she thinks is "absurd" the pressure women put themselves in trying to look like a model after giving birth.

"I think a woman's body after having a baby is pretty amazing. You don't need to be Victoria's Secret ready right away, because you just did the most incredible miracle that life has to offer. You gave birth to a human being. So I would really like to see that celebrated".

Ladies celebrate your body and if you like to get in shape, stop reading and start working out.

my mission to surprise everyone 🤗

"There's nothing natural about losing baby weight quickly." That's what actress and mother of two, Mila Kunis has to say about it.

This talented actress has spoken about the changes that her body has had since her two pregnancies. After she had her daughter the big change was her breasts. "I don't know how to deal with them because I've never had them, and so I always dress for a flat-chested girl and now all of a sudden I'm busty, and I'm like, 'Wow, check it out!'"

Kristen Bell has her priorities straight: As long as her family is happy, healthy, and together she is happy. She said it brilliantly "It right-sized all of my problems."

The actress is a mother of two, and since her first son was born she refuses to be obsessed with her post-baby body because there's nothing she could, it was "just part of the journey of having a baby."

Ladies take notice of how she feels about it, you did something spectacular, you're superheroes, so be proud of your post-baby bodies.

The list of celebrity moms embracing body positivity nowadays is a long one. Which is great because they can inspire a lot of women that are struggling with body weight due to pregnancy or not.

What you have to remember when getting frustrated because that extra body weight is not going away as fast as you can, is that it is not natural to lose it quickly. For some celebrity moms is part of her job to do that, but otherwise, they take their time and they enjoy that period of their lives.

Let's finished with this beautiful quote by Jennifer Garner: "From now on, ladies, I will have a bump, and it will be my baby bump. It's not going anywhere. Its name is Violet, Sam, and Sera."