Story of Hecate, the Greek Goddess of Witchcraft 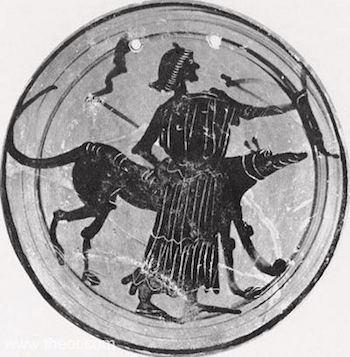 Greek mythology is so interesting, it's filled with lots of god and goddesses and heroes and mythical creatures all with their own unique stories. This time we are going to tell the story of one of the most unique goddesses of Greek mythology: Hecate, goddess of Magic and Witchcraft. Hecate's story is an interesting one, have you heard about her? Do you know what powers she had? Where did she come from? Keep reading, we'll tell you all about it.

So, who was Hecate? She had a lot of titles, Hecate was the Greek Goddess of magic, witchcraft, crossroads, ghost, and necromancy. She was also known as the goddess of moon and light, Hecate had knowledge of herbs and poisonous plants. She was considered a powerful goddess but, compared to the twelve Olympiads, she was not considered a great deity.

There is no exact knowledge about who were her parents. The thing is that ancient stories have changed a lot through time so there's no certainty about Hecate's parents. Greek mythology scriptures are not really helpful because they don't give an accurate description of her parentage. However different sources have mentioned these four pairs as her possible parents: Perses and Asteria, Zeus and Demeter, Zeus and Hera, Leto and Tartarus. 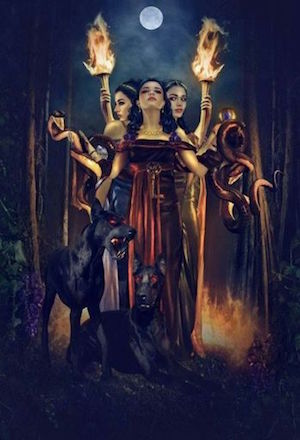 Hecate was a titan. which was a big deal because the Titans ruled the heavens, the earth, and the sea. She was also considered an ancient Thracian divinity. The Titans were pretty important in Greek mythology because they gave mortals some very coveted blessings: wealth, victory, wisdom and luck. Well, since Hecate was a titan, her story says that sometimes she withheld these blessings if she deemed that a particular mortal was not deserving.

The story says that when the Olympiads defeated the Titans, Hecate was the only one permitted to retain her powers, as bestowed by Zeus. She was also honored by all the immortal gods.

Hecate loved solitude and like her cousin Artemis who was a virgin goddess, she loved her independence so she was unwilling to give it up for marriage. At night she'd like to walk the roads and visit cemeteries during the black phases of the moon, that's how she was described as shinning and luminous.

The Powers of Hecate 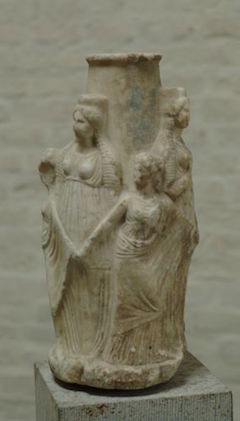 The powers of Hecate were the result of a combination of her farsightedness and her eye for detail and her intense interest in what others deem irrelevant or arcane. As we stated before, she is considered the goddess of magic, witchcraft, crossroads, doorways/gates, ghost, and necromancy; these titles were gained mainly because of her tremendous powers.

1. Hecate had the power to bestow and/or withhold favors

Hecate, as we stated before, was a Titan and thanks to that heritage she had the power to not only bestow favors to those mortals but also to withhold them if she didn't think they deserved them. She bestowed blessings like wealth, good fortune and wisdom to those who she favored or thought were worthy. Her powers grew when, during the Titanomachy, she sided with the Olympiads and granted her being honored by all the gods including the powerful Zeus. She was able or allowed to maintain her powers, making her the only one of the old regime that was able to retain them after the Titans were defeated.

2. She ruled over the underground 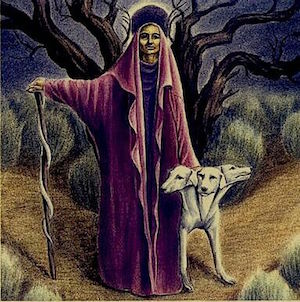 Called the queen and goddess of the night, Hecate was known to take trips to the underworld usually at night. She had an entourage when she took these trips as she was seen accompanied by her hounds and by ghosts and by people that were considered outcasts. The myths say that these night trips were to help other gods.

Hecate felt comfortable in the underworld, which was unusual to a goddess that was born in the Greek heavens, but since she was unique and different from other gods, she enjoyed the company of the people who resided there. This choice for the underworld is part of why she is featured in the myth of Persephone's abduction by Hades. In Homer's version of the myth, the poet writes that Hecate witnessed the abduction of Persephone so when her mother, Demeter started looking for her, she was able to tell her where she was.

The myth says that Hecate armed with a flaming torch in each hand went looking for Persephone in the underworld, where Hades had taken her to make her his bride. Zeus had asked Hecate to bring Persephone back, but she didn't do that, instead, she became her companion and helped her adjust to her new life. This was much appreciated by Hades, so Hecate was granted a permanent stay in the underworld and she could come and go as she pleased.

3. She had the power to see in all directions 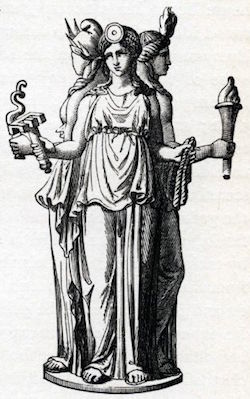 The reason she's called the goddess of crossroads comes from her depiction as a beautiful woman with three human heads and that gave her the ability or the power to see in all directions at once. This included being able to see all parts of the timeline: the past, the present, and the future. For Hecate, these three directions were roads that converged and they were sacred to her.

Hecate's ability to see in all directions gave her wisdom and many sought her because of this. It gave her the power to see beyond to know if the mortals seeking her help were really worth it of the blessings they were asking of her.

4. She has divine authority and absolute control over magic 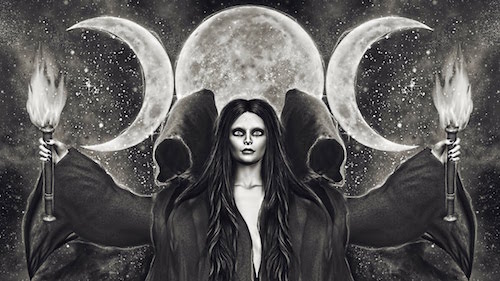 Hecate is the goddess of witchcraft, magic, and sorcery. One of her powers is Mystiokinesis or reality-warping, which is the ability to cast and manipulate magic. For example, Hecate could create snow, or change the weather or change a human into an animal. Her power over magic though absolute is stronger during the night. She was able to create some winged bloodsucking monsters using dark magic, bronze, animals, and ghosts.

5. Hecate had control over dead and over darkness and shadows 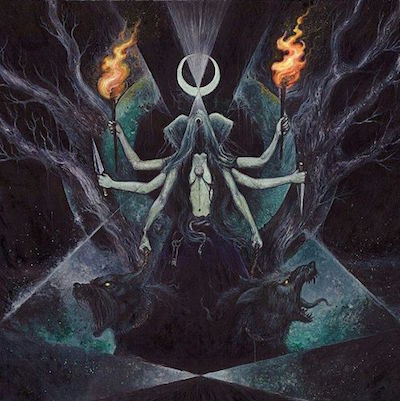 Hecate could forth call endless forces of death to help fight for her; she could also destroy the skeleton warriors (in Greek mythology, the skeleton warriors aka Spartoi were creatures created by planting the teeth of a dragon sacred to Ares, killed by Cadmus); she was known to put the dead to sleep and also silenced them with a gesture. And last but not least, she could grab a ghost. How about that?

As goddess of the night, she totally controlled darkness and shadows, she had powers over them. When faced with enemies she could cast bolts of darkness and surround them in pitch-black clouds of blackness. She could turn shadows into impenetrable shields and could use them (the shadows) to totally concealed herself becoming invisible, She was able to travel at very high speeds because she used the shadows to do it. She saw very clearly at night. 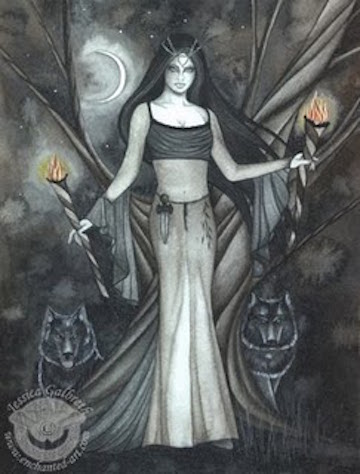 Hecate had many tools or symbols associated with her: In her human representation one of the symbols she is depicted with is a pair of torches, which she uses to illuminate the darkness, These torches are one of the most well-known symbols of Hecate because, according to the Greek mythology, Hecate used them when she descended to the underworld searching for Persephone.

Another symbol is a key or a chain of keys because Hecate is the goddess of crossroads and doors, passageways and walls. Another famous symbol of Hecate is the moon, that's because in some depictions she was associated with Selene or Artemis and they both counted the moon among their symbols. Actually, in one tradition, the three forms of the goddess Hecate were the new moon, the half-moon and the full moon.

Hecate, as stated before, spent a lot of time in the underworld so all the animals that were sacred to her had to be black. The symbol of Hecate among the animals was a black she-wolf (which as of today is associated with witchcraft). Hecate lived in two worlds and she could cross between them as she pleased, that is why another symbol associated with her is the frog. This creature also lives in two worlds (water and earth) and crosses them at her will too.

Draw Inspiration for the Goddess Hecate for 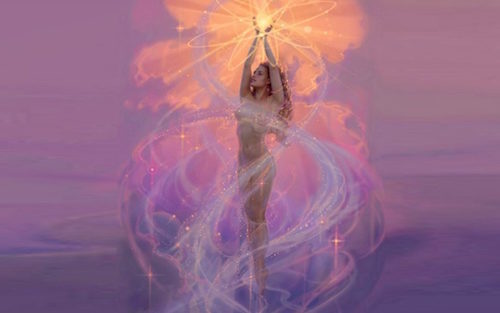 What inspiration can you draw from this unique Greek goddess? She was granted many powers by the gods and one of them was wisdom and she used that wisdom not to harm but to make the lives of the one she deemed worthy better. As the goddess of crossroads, she could look beyond, Hecate could look at past, present, and future. You can draw inspiration from that by acknowledging the past, living the present and embracing the future. 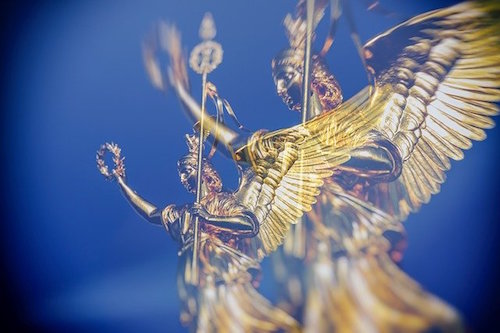 Not your average Greek goddess, Hecate was a very powerful goddess without being considered a major deity. Her influence included many things like the moon, the crossroads, the underworld, the ghosts and that secured her a place in some very famous Greek myths that as of today people keep talking about.