A brief about Vin Diesel 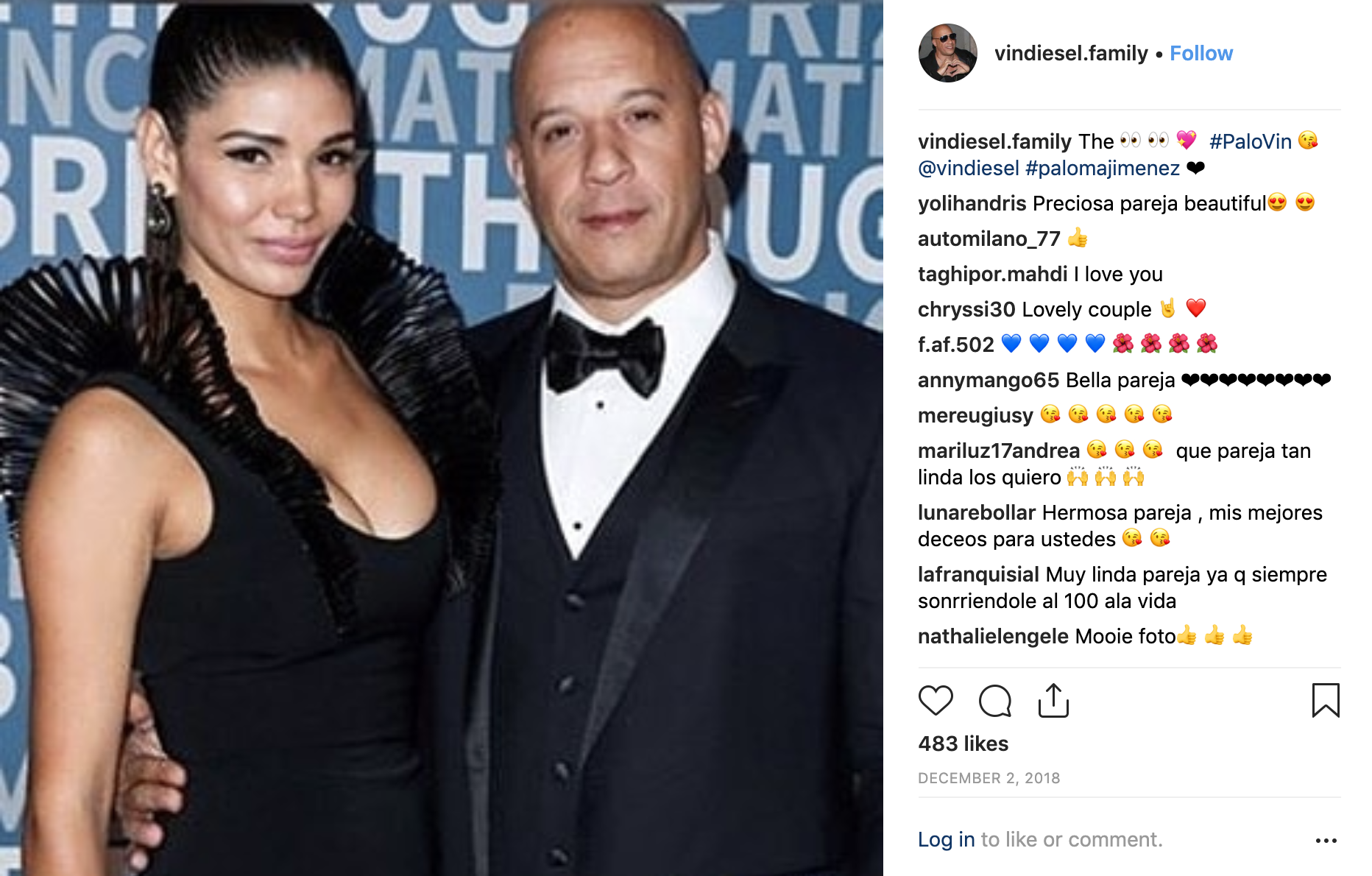 His production company is 'One Race Films'. Diesel has also starred in films like 'The Pacifier' (2005) and 'Find Me Guilty' (2006). He is known for his voice-acting work in movies like, 'The Iron Giant' (1999), the video game spin-offs from the 'Chronicles of Riddick' franchise, as well as 'Guardians of the Galaxy' (2014) and its 2017 sequel. He wrote, directed, produced and starred in a short film titled 'Multi-Facial' and a drama film, 'Strays.' 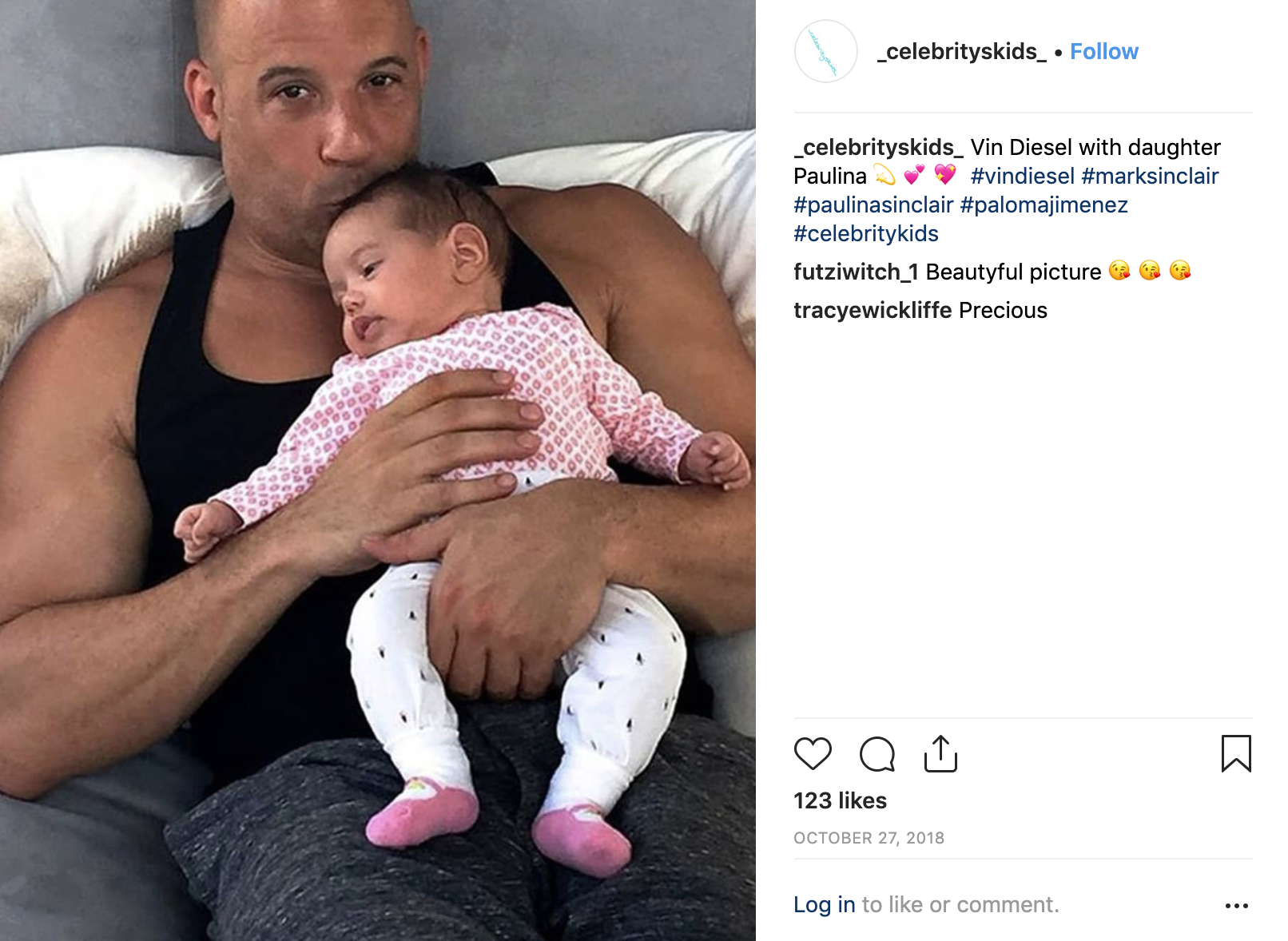 Along with his company, One Race Films, he has also founded companies Racetrack Records and Tigon Studios. Diesel is noted for his recognizably deep voice which got very deep when he matured at the young age of 15. In 2001, he dated his 'Fast and the Furious' co-star, Michelle Rodriguez. Diesel is married to Mexican model Paloma Jimenez and they have three children together. He has a daughter Hania Riley born in 2008, son Vincent Sinclair born in 2010 and a second daughter Pauline born in 2015. 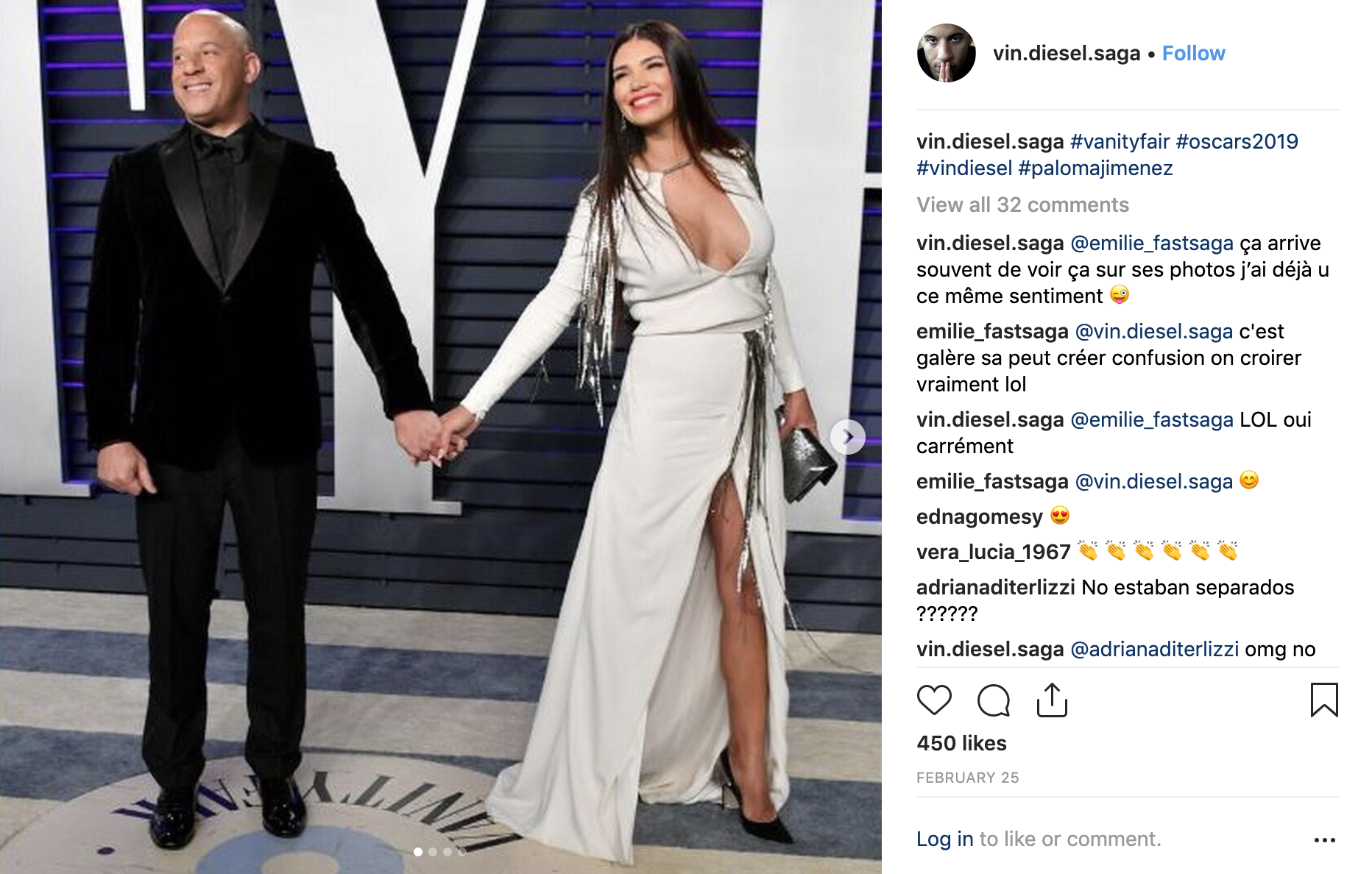 Karla Paloma Jiménez Denagustin is a Mexican model and actress who was born in 1983. Jimenez has participated in various commercials for brands such as Coca Cola , Pantene and Honda. She has also appeared on various magazine covers, including that of the January 2015 Mexican edition of Maxim Magazine. She is the wife of the actor Vin Diesel , with whom she has three children: Hania Riley (2008); Vincent (2010) and Pauline (2015). Her youngest daughter was named Pauline in honor and memory of the late actor and friend Paul Walker, who died in a car accident in 2013.

Vin Diesel has always managed to steal the limelight at any event that he attends. His partner, Paloma Jimenez equally deserves attention and has managed to carve a niche for herself in the entertainment industry. The stunning lady has managed to capture the heart of the 'Fast and Furious' star all to herself. Her husband is currently filming the much-anticipated 'Bloodshot' and reports now say 'Fast and Furious 9' will be delayed until 2020.

Here is all that you need to know about this gorgeous model:

There's was a longtime romance: Paloma Jimenez and Vin Diesel have been together for nearly a decade. Before Jimenez, Diesel was in a relationship with his Fast and Furious co-star, Michelle Rodriguez. Soon Diesel was seen with Jimenez about town despite the fact that they have an age difference of 16 years but a very strong marriage.

Paloma Jimenez is an accomplished Mexican model: Jimenez took the modeling world by storm with her sizzling good looks and fabulous body. Born as Karla Paloma Jiménez Denagustin on August 22, 1983, in Acapulco, Mexico, she began modeling in her home country, Mexico very early in her life. Jimenez can speak Spanish fluently: She’s fluent in Spanish and has been active in the modeling world in both, Mexico and the U.S. 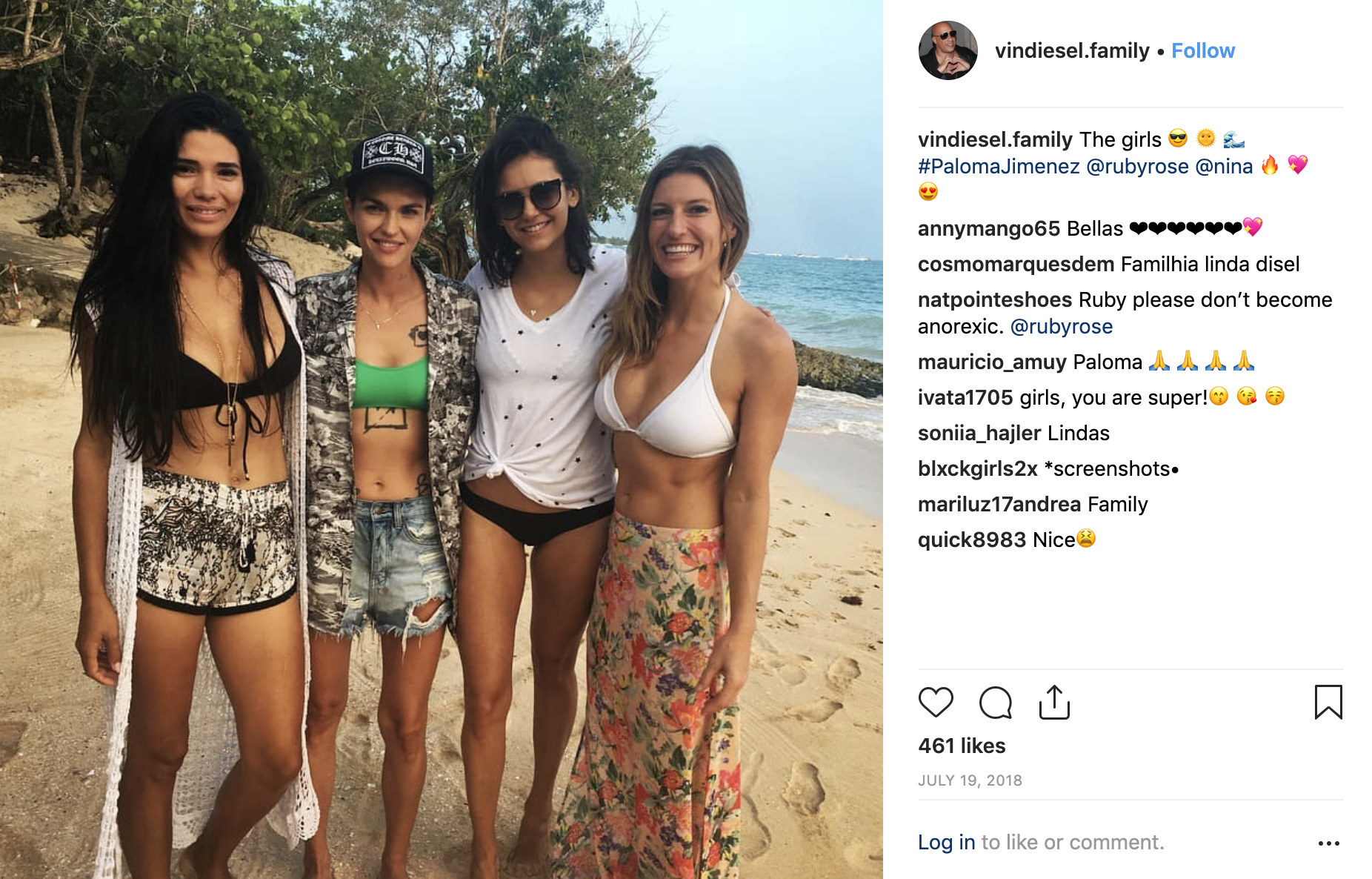 She’s represented by ID Model Management in the United States and by Look Models in Mexico. Her modeling resumé boasts of some major ad campaigns. Jimenez has as been in print ads for massive brands like Coca-Cola, Honda, and Pantene, and she’s even appeared on the cover of the Mexican edition of Maxim.

She’s a mother of three: The model and her actor beau are doting parents to their three kids. She gave birth to their first child, Hania Riley, in 2008 when she was 24 years old. The pair’s second child, a boy they named Vincent Sinclair, was born in 2010. In 2015, Diesel and Jiminez welcomed their third child, Pauline, who is named in honor of the actor’s late friend and beloved Fast and the Furious co-star, Paul Walker, who passed away in 2013 in a tragic car accident.

Diesel is also godfather to Paul Walker’s daughter, Meadow. * She was on TV: Jimenez portrayed a part in the popular Mexican variety show, 'Otro Rollo.' The show was aired from 1995 until 2007 and featured sketches, interviews, live music and other forms of entertainment. 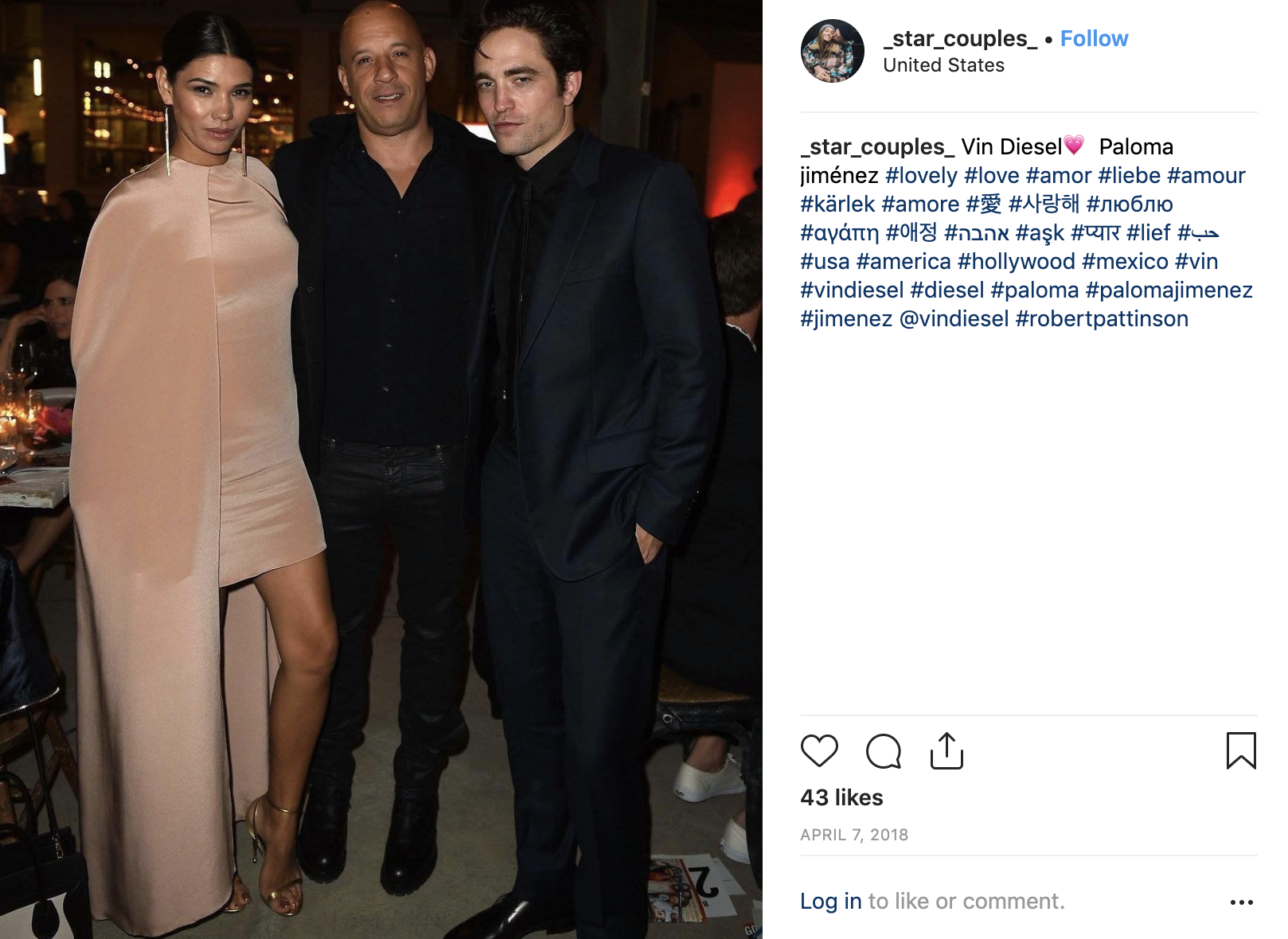 Jimenez has always been by his side every step of the way: In August 2013, Vin Diesel received a star on the Hollywood Walk of Fame. When he went down to accept the honor, Jimenez was right there by his side, along with their two kids, Hania and Vincent. Also present were Diesel’s mother and father, Delora and Irving. This lady has always been by his side supporting him through thick and thin and the duo are always seen together whether they appear at promotions, premieres or red carpet events. Their social media accounts are full of photos of the two of them together.

Net worth of the model 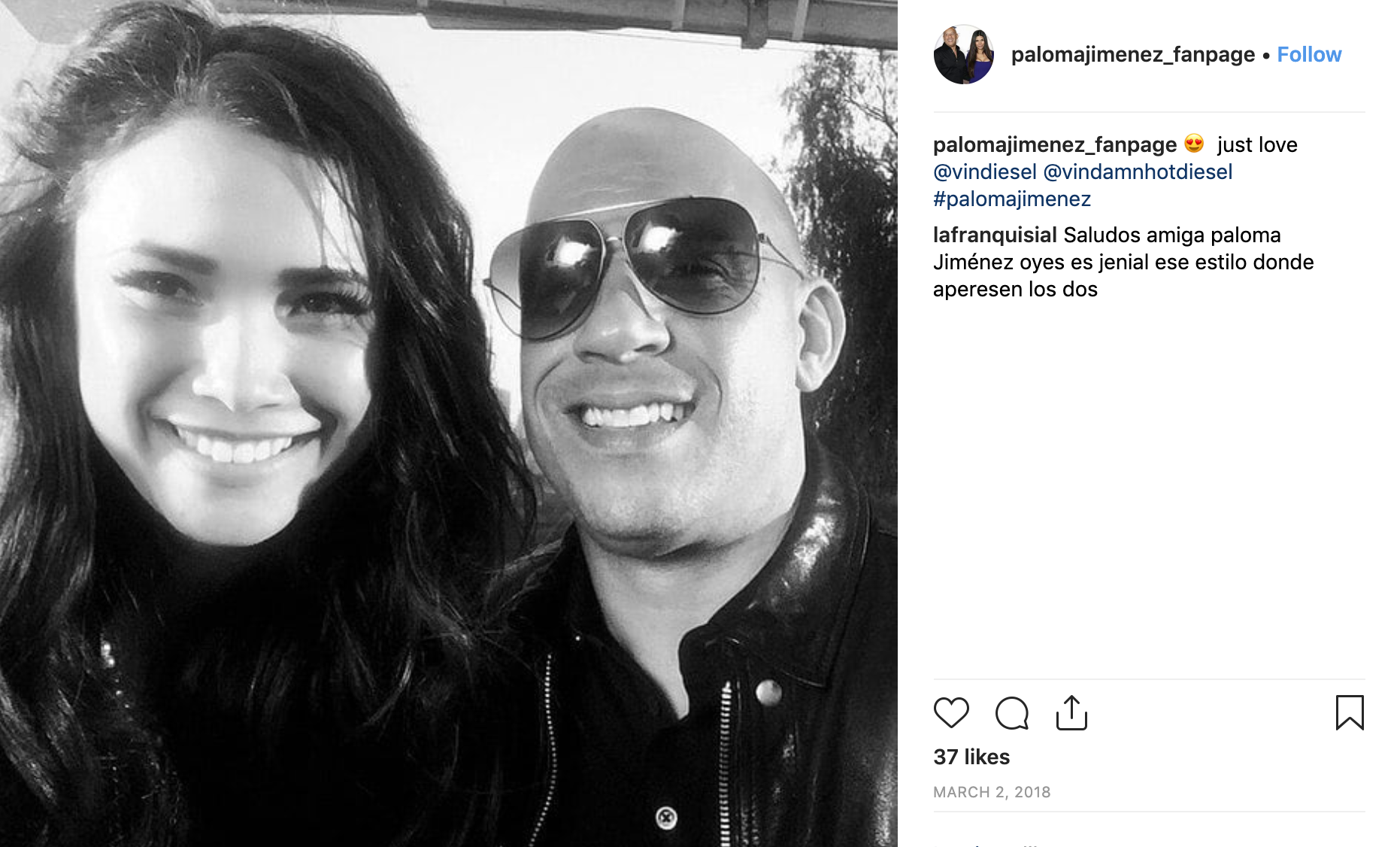 The net worth of Paloma Jimenez is estimated to be around $5 million dollars and her beau, Vin Diesel, has a whopping net worth of $200 million and this astonishing figure was buildup from 'Fast and Furious' where he was against making the sequels in the first place. One can see a lot of photos of Paloma Jimenez with her beau Vin Diesel on Instagram @palomajimenez.