Burn Gorman in a nutshell

Burn Hugh Gorman was born on 1st September 1974. He is an American-born English actor and musician who is best known for his roles as Dr. Owen Harper in the BBC series, Torchwood aired from 2006 to 2008, Karl Tanner in the HBO series, Game of Thrones aired between 2013 to 2014, Dr. Hermann Gottlieb in Pacific Rim (2013) and its sequel, Pacific Rim Uprising (2018), and Major Edmund Hewlett in the AMC series Turn: Washington's Spies (2014). Since 2015, Gorman has played the part of The Marshal in the Amazon drama, 'The Man in the High Castle'. Gorman was born in Hollywood, California, to English parents. His father was a professor of linguistics at the University of California, Los Angeles. At the age of seven, Gorman relocated to London with his family. He has three elder sisters. Gorman got his training at Manchester Metropolitan University's School of Theater. Gorman has acted in clubs and on stages all over the world, acting alongside Neneh Cherry, Rodney P, and Groove Armada. He has also worked on music videos and visuals with, 'The Streets'. Gorman was crowned the BBC 1Xtra Human Beatbox Champion in 2003. Gorman has been married to Sarah Beard who is a schoolteacher, since 17 July 2004. Beard gave birth to their first baby, son Max Hugh Gorman, in Cardiff in 2006, whilst her husband was busy in the production of the first series of Torchwood. The couple's second child, daughter Nell Gorman, was born on 25 January 2009. A second daughter, Rosa Gorman the couple's third child was born in September 2014.

On 17 July, 2004, Gorman and his wife Beard had a simple wedding ceremony. She works as a school teacher. Not much details of their wedding is currently known. Two years later in 2006, when Gorman had just shot up his career with his Torchwood role, the couple welcomed their first issue, a son named Max Hugh Gorman. He was born in Cardiff. The second, a daughter named Nell Gorman, was born on 25 January 2009. Their third child, a daughter, Rosa Gorman, was born in September 2014. Although Mrs Gorman has a private life, she does occasionally accompany her husband to his film premieres and other events. She accompanied him to the European premier of Pacific Rim at BFI IMAX, Southbank, London. 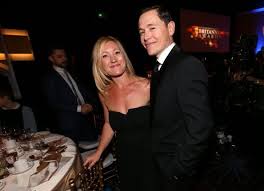 Sarah Beard might be accessing Facebook and Instagram via a private account. She keeps a low profile. Her husband, Burn Gorman is quite active on his Instagram page @burngorman1 and on his Facebook page @Burn Gorman. He uploads a lot of his random photos and photos from his movies on his social media accounts.