Who is Sophia Bush?

She had her big break on One Tree Hill, which captured the hearts of millennials old enough to appreciate TV dramas. She segued into the movie industry with John Tucker Must Die and Stay Alive. After all these projects were completed, she then began her journey as Erin Lindsay in the Chicago series: Law and Order: Special Victims Unit, Chicago Fire, Chicago Med, Chicago Justice, and finally Chicago P.D. Although Sophia Bush has retired her Chicagoan character that piqued the interest of millions, her activism and dimples still make her America’s sweetheart. Picking out 10 of Bush's hottest pics of all time was no easy feat; Sophia Bush looks amazing in every pic. Thankfully, she has a surplus amount of them on her Instagram (@sophiabush). Ms. Bush uses this popular social media outlet to not just showcase her glory as some celebrities, but she also uses it for her activism and responses to current social issues.

Ms. Bush Being Comfy and Casual

The best thing about Sophia Bush is that she can wear the comfiest sweater and still look hot! Ms. Bush looks irresistible in this over-sized sweater from a photo shoot.

Thanks for the snowstorm, Chicago. We've certainly got ourselves a winter wonderland ❄️

Ms. Bush looks like a princess in this picture. She may be bundled up, but her flawless complexion puts this picture in the top hottest pics!

#tbt to flying high and getting zen at my #SunSalutation yoga brunch with @LifewayKefir. It was such an inspirational morning surrounded by women I adore. I wish we could do this every Saturday! How are all of you guys managing to find the time to take moments to be mindful and reflect on your health, both mental and physical? Gimme tips, recipes, all of it! 💋👭🕉💪🏼 #LocustPose #BendAndZen #LetsGetPhysical #KefirKweens @juliesmolyansky @dawnbyoga

It should come as no surprise that Sophia Bush works out. In this pic she posted on Instagram, she flaunts her curvy athletic body as she holds the locust pose in a yoga class.

Did somebody say mezcal?! 🌵 #TakeMeBack #SíAquí

Sophia Bush soaks up the sun in this retro bathing suit. She makes lounging by a pool glamorous!

Summer, don't go. I'm not ready to kiss you goodbye yet. #fbf @photobyhudson

Sophia Bush is a summer paradise!

She makes summer look even hotter (if that's even possible!). Sophia Bush had a photo shoot by the ocean and looked like she was having a blast doing it!

My photoshoot got tons more fun when this big guy literally ran through it. He came bounding up to me, ready for pets and kisses, and licked the sand off my knees. Malibu has long stretches of beaches, and I'm pretty sure they all belong to him. @bellomag #MarchCover #ChicagoPD

Anyone that has visited Sophia Bush’s Instagram knows she loves dogs. This lucky dog ran up to her during a photo shoot, and she said it made the shoot a whole lot more fun. She sure looks like she's having the time of her life!

No one else's heart beats for the reason and the purpose that mine does. My soul is mine alone.

Sophia Bush proves time and time again she is more than just a pretty face!

Dressed up for photo shoots and photo ops

As much as we love to see Sophia Bush in comfy sweaters and yoga pants, it cannot be denied that when she gets dressed up for the red carpet, our jaws drop! Ms. Bush rocks this see-through LBD!

Sophia Bush does not, by all means, need to show skin in order to be considered hot. However, when she does? I don't think anyone minds!

One of us is eating for two and one of us is just ... enthusiastic about ice cream 🍦😜 #WhatsMyExcuse #BurgessBabyOnBoard #SnackingSisters

Like I said before, Sophia Bush does not need to strip down for a pic to be one of the hottest stars on television. Ms. Bush still makes ice cream melt in her Chicago P.D. garb. 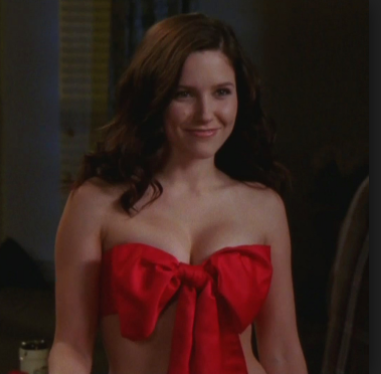 She's a gift to the world!

If you thought for a second I wasn’t going to put this screenshot from One Tree Hill on this list, you seriously underestimated my list. We all remember this scene — Brooke Davis unveiling a ribbon bow top for her boyfriend, Julian Baker, leaving MUCH to the imagination of the viewer. Although her Instagram has some #tbt from her days as Brooke Davis, Sophia Bush seemed to leave out this hot number. She does have quite the number of fans looking up to her as a role model, so I can see why!

Sophia Bush fights for other's rights and looks hot while doing so! She is the epitome of a role model, and this generation is lucky to have someone like Sophia Bush. She's hot, but she uses her brains and voice more to get her message across. Ms. Bush will be missed from the hit drama series, but I am sure she will shine in whatever project she takes up next! Follow Sophia Bush on Instagram and Twitter (@sophiabush) to stay updated on her latest news and photo shoots!