1. Stranger Things: Steve Harrington Is NOT A Dick?

Ok, so let me get this straight. Steve Harrington who slut-shamed Nancy in Season 1 of Stranger Things is not a jerk? Writers in Hollywood typically stay on task when it comes to character archetypes. Steve Harrington, as played by Joe Keery, for all intents and purposes has been pretty stereotypical: the pretty jock who wants sex from Nancy and is at first complicit in gossiping about her and bragging about having sex with her. Season 1 held all the clues to Steve Harrington's maturity. The easter eggs were there folks, if you're paying attention. Through the course of Season 1, we see him pressure Nancy into losing her virginity and bad mouthing her to his friends. But, when his friends go too far, he confronts his friends and removes the graffiti from the town theater, by himself. He owned up to his mistake. In the scenes with the kids, Joe Keery towers over his co-stars at a height of 5ft 11" and it makes his scenes with diminutive cutie-pie Gaten Matarazzo all the more adorable for it. It was only a kernel of things to come in the growth of this unlikely sweet character, who goes from bully in Season 1, to the ultimate teenage demogorgan vigilante, in Season 2. Season 2 was all about transformation of Eleven and Steve. SPOILERS: In fact, in the hands of Joe Keery, Steve Harrington puts his demons to rest and actually becomes a big brother to Dustin and his crew. Steve Harrington, sports a baseball bat of nails while babysitting the kids to the finish line, in a topsy turvy homage to Goonies, The Lost Boys and a skoche of Adventures in Babysitting thrown in for flavor texturing. It's pure story genius and the writers make the transition of his character BELIEVABLE. 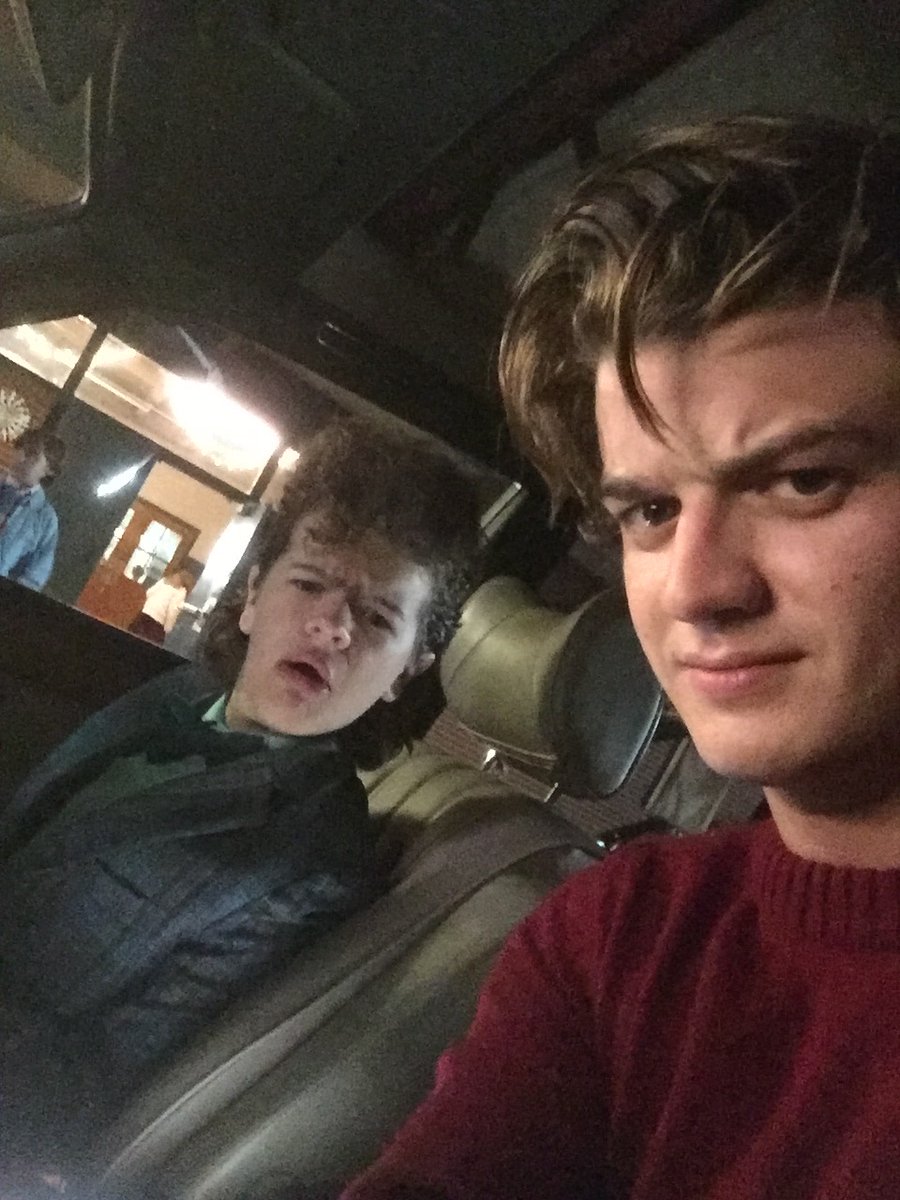 One of the sweetest story elements of Stranger Things Season 2 is the genuine friendship that develops between Steve Harrington and Dustin Henderson. You really believe that he takes the role of being big brother seriously. So much happens to them; by the time Steve gives Dustin a ride to his prom, we can't help but go all gooey inside at how truly precious they are. Kudos again to the Duffer Brothers; the showrunners are bomb.

'You can tell that these two characters, although they’ve been shoved together because they’ve been ditched by their friends, end up caring about each other and looking out for each other. It turns into this big-brother relationship, even though they’re both a little stubborn and think they’re the boss and they’ve got it all figured out. Underneath, there’s this genuine care for each other. And that’s what makes this relationship cool, that these two characters you wouldn’t necessarily think would ever even interact, the fact that they bond over not having anyone else is what makes it special."

Joe Keery on his character forming a friendship with Dustin in Season 2 of Stranger Things. 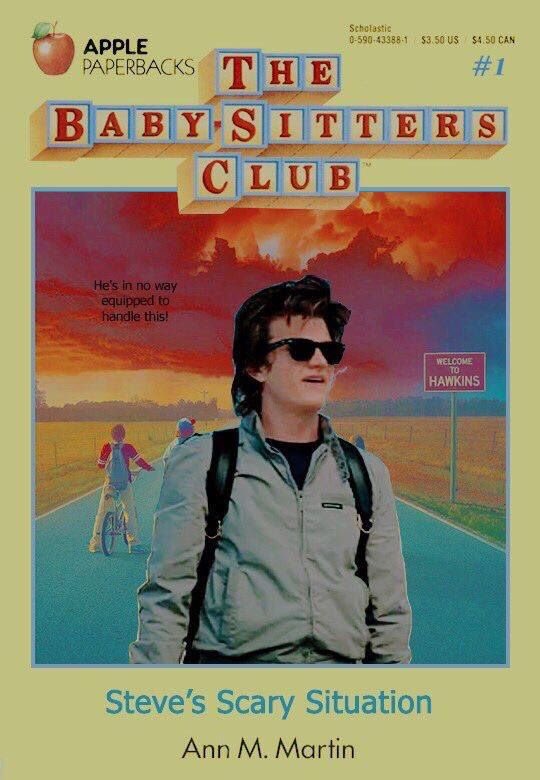 In Season 2 of Stranger Things, Steve Harrington went from serious douche, to a deftly played homage by series creators the Duffer brothers; transforming him into Elisabeth Shue, like the 1987 hit Adventures In Babysitting. The fans went crazy for his successful character makeover of a d-bag. Unfortunately, this about-face in conscience doesn't save his relationship with Nancy. The twittersphere was bursting with hilarious memes about Steve Harrington on Stranger Things 2 and we couldn't resist posting this one. Hilarious.

You really get the sense that Steve Harrington is on a mission to save Hawkins and its sleepy town way of life. He's growing into the man he wants to be and he's also fighting for his town and the people in it. The hero's call to adventure has Steve Harrington as a surrogate parent to all of the younger kids and desperately trying to be the voice of reason. When you think about how Steve Harrington AKA Joe Keery, responded to Nancy's saying their relationship is B.S., after she gets drunk; it's astounding. He takes it in and internalizes it. He doesn't even get nasty with her. He's learned from last season. Steve Harrington doesn't turn his back on Dustin when he asks him for help, either. He makes unselfish choices. He's learning to be a better person. At the age of 25, Joe Keery is a very believable teenager. At a height of 5ft 11," he makes a good choice for a romantic jock and jerk turned hero, as well. Joe Keery brings such sweetness and warmth to match the always adorable Gaten Matarazzo. You believe their friendship has truly grown, first out of necessity since they both found themselves without their friends and then out of sheer survival, as they traipse through the cave swarming with demogorgans. The reason why audiences have responded to Stranger Things 1 and 2 the way they have is because it's genuinely good storytelling. It's not bogged down by Hollywood branding and just a retro re-tread. For writers out there, THIS is how you do it. The Duffer Brothers know their material enough to repurpose and deconstruct 80s gems and character archetypes and how to make them more fluid. Bring on Stranger Things 3. 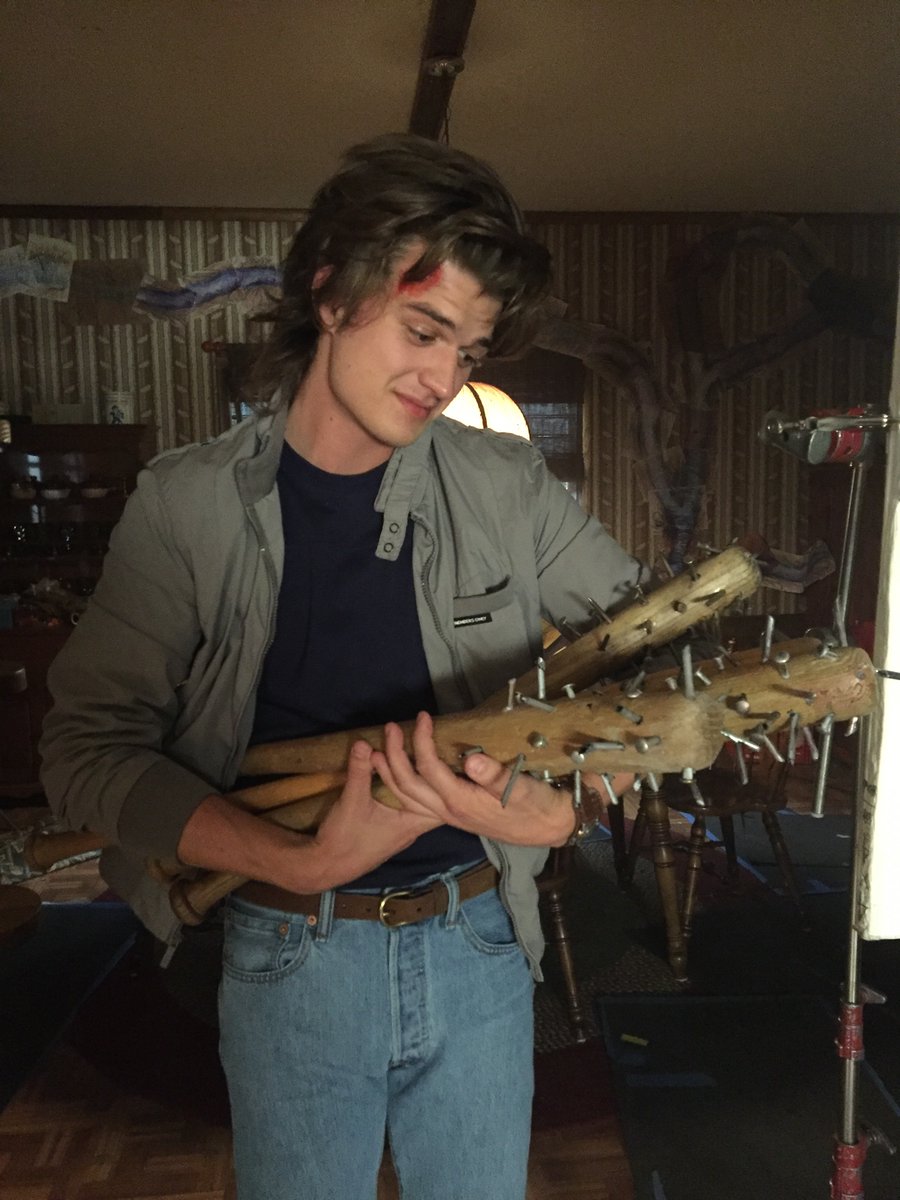 Joe Keery does go a bit batshit crazy in Stranger Things 2. As nice as Steve Harrington has become, he gets to let his anger out with spiky baseball bats and whup some demogorgon ass. At a height of 5ft 11" - he's more than capable.

Actor Joe Keery has had quite a heady 2016-17. He went from relative obscurity, save for a pizza commercial, to starring in Stranger Things and finding love in the process. Joe Keery has officially got a girlfriend: Maika Monroe. Actors have few options to date, as they become more famous, so it's understandable they fall for co-stars. Although they haven't worked together yet, they will be navigating those sometimes rough waters soon. Joe Keery and Maika Monroe are co-starring in "Shotgun" in 2018. It's a comedy with Oscar-winner Marisa Tomei. The couple met only recently and have been low-key about their relationship that has been going since July 4th, 2017. If you don't recognize Joe Keery's girlfriend Maika Monroe, she was the lead in the breakout low-budget hit It Follows, in 2014. Maika Monroe also had significant roles in The Bling Ring and Independence Day 2. Both Joe Keery and Maika Monroe are just starting their careers in Hollywood and at age 25 and 24, they are well-matched. Congratulations on the new girlfriend and success, Joe. 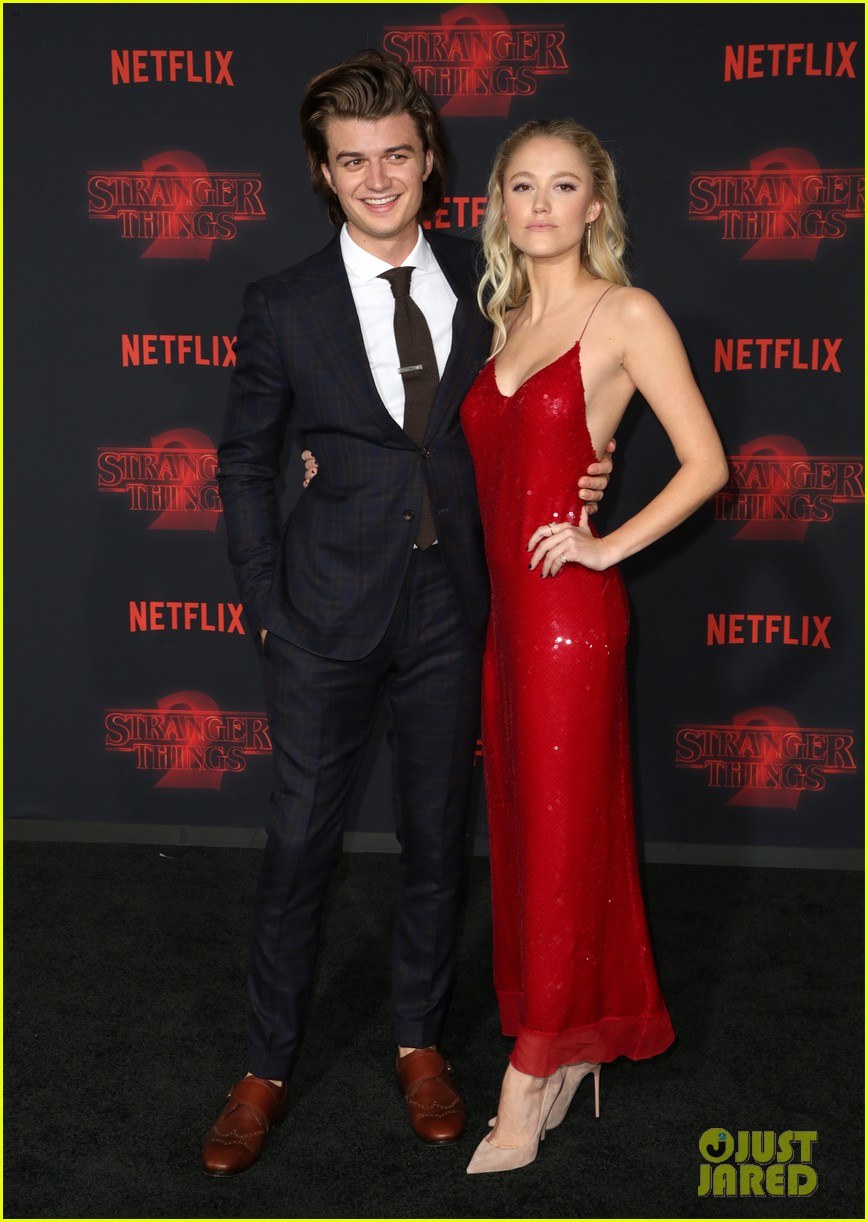 Joe Keery shows his dapper suit off and at a height of 5ft 11," it fits his frame perfectly and girlfriend Maika Monroe was on hand looking gorgeous at the premiere of Stranger Things 2, in Westwood, October 26th, 2017.

Yes, the rumors are true. Joe Keery and girlfriend Maika Monroe have been dating since July 4th, 2017 and are due to shoot the feature film Shotgun, in 2018. Girlfriend Maika Monroe was at his premier ladies - that's a huge step, since neither of them have put any PDA on their instagram accounts. If you look at either Joe Keery or Maika Monroe's instagram accounts; it's all business and no relationship status. Their instagram brands are about who they are with in the biz, on set, friends etc and are similar in that they have an instagram goofy charm and sensibility. Anyway, the bottom line: she's been on his arm at any event and it looks like for some time to come. Here's hoping he treats girlfriend Maika Monroe better than his alter ego Steve Harrington, but at age 25, I'm sure he has more maturity than his teenage self. LOLs. Sorry ladies, in all seriousness, Joe Keery is off the market.

SPOILERS: Season 2 of Stranger Things sees Steve Harrington AKA Joe Keery take it for the team, on several levels. The first blow comes in a drunken confession from his onscreen girlfriend Nancy, saying their relationship is BS. Then, Joe Keery AKA Steve sees her relationship burgeoning with Jonathan and tells her "it's okay." What a gentleman. He literally just lets her go and you get the feeling it's killing him inside. Without his jock identity from last season, having claimed Nancy's virginity, slammed and then protected her honor and dumping his friends for her; he's at loss in Season 2. In a way, he has switched roles with outsider Jonathan and it softens him in all the right ways. Instead of being a victim, he joins ranks with the outsider Dustin Henderson and then the rest of the kids to do battle with the rampant demogorgon population starting to take over Hawkins. He also gets his ass seriously kicked by new town jerk Billy, played by Dacre Montgomery who's looking for his sister Max, the red-headed new member of the D&D squad. All told, Steve Harrington is the breakout character in Season 2 of Stranger Things. He represents what we all wished our high school first crushes would do if we dumped them and if they set aside all the posturing and hormones. 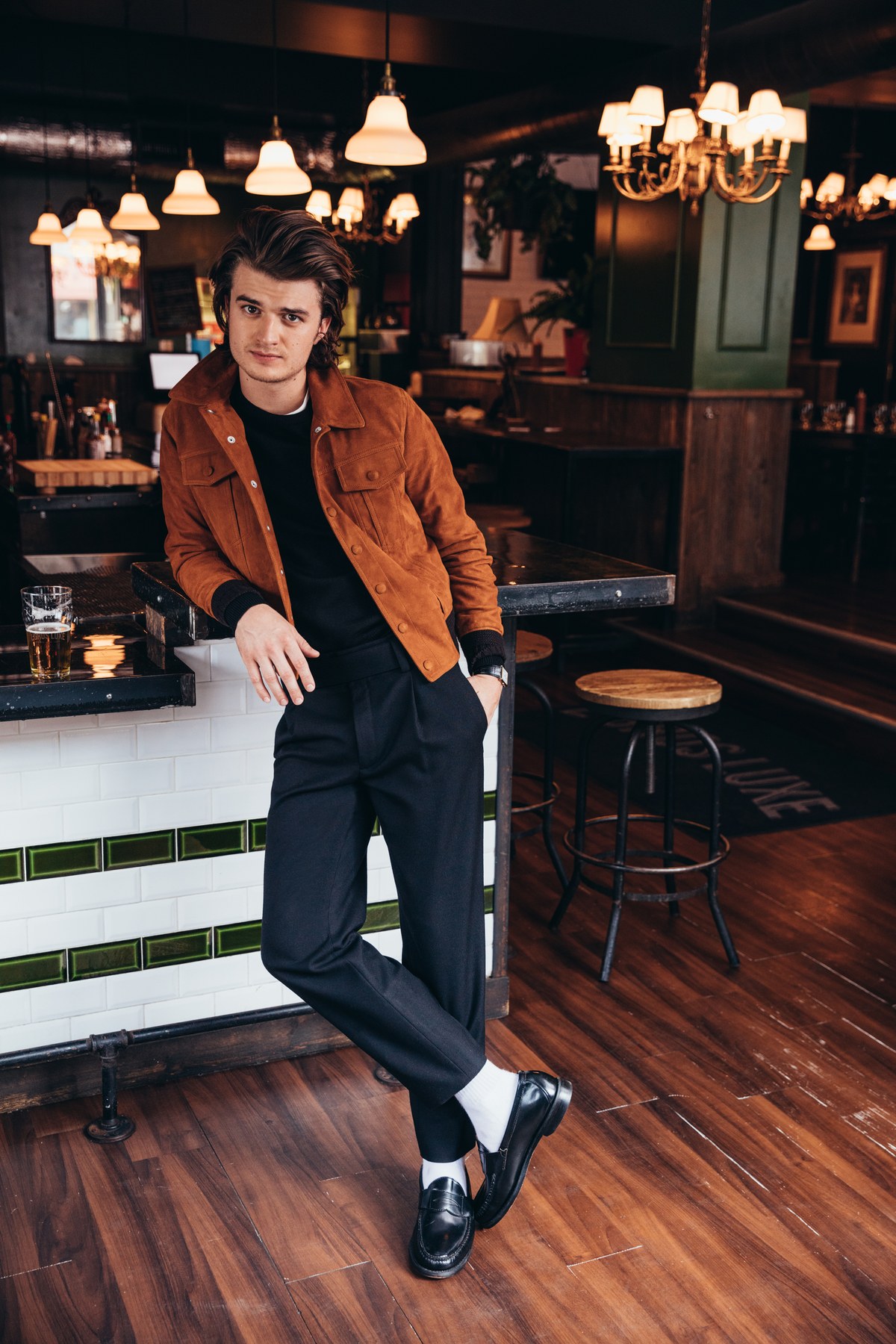 4. Joe Keery Net Worth Is Bigger Than Harrington's Hair

Rolling into 2017, Joe Keery's net worth is a whopping $2.3 million. When you think of the fact that he was struggling to get work as an actor 2 years ago, I'm sure his net worth then was less than stellar, but normal for an out-of-work 25 year old actor. Joe Keery's net worth since booking the role of Steve Harrington, has certainly allowed him to stop struggling, as actors do until their big break. Also, going from recurring guest star in Season 1 of Stranger Things to series regular (an actor's dream, by the way) in Season 2, his net worth took another spike upwards. He went from regular Joe to Hollywood Joe, in less than a year. Props, Joe.

You know you've made it as an actor when you have what's known in the industry as a quote. You can ask for a price larger than scale usually. Same thing applies for auditioning - an actor that is an "offer only" doesn't prepare for any role without a firm offer. Now that Joe Keery has made it; his asking price will increase his net worth immensely, as of 2018.

5. Joe Keery Got His Big Break On A Dominos Commercial

Joe Keery has had hundreds of auditions. He's appeared on KFC and a pretty epic Dominos commercial, before success with Stranger Things in 2016. This particular Dominos commercial is pretty rad because it recreates the end of Ferris Bueller's Day Off. In the Dominos commercial, Joe can be seen leaving his girl and running home to meet the Dominos driver. Oh, and if you're a geek like me, look for the actor who played the part of Cameron in the original movie, in a cameo in the car near the end. Rad AF. Well played Dominos, well played.

Net One For The Good Guy: Joe Keery's Future

Joe Keery comes from a regular working class family, born April 24, 1992 in Newburyport Massachusetts. He has 4 sisters, which means Joe Keery will respect the sacred feminine, for sure with those stats; sisters don't play around, regarding respect. Another thing to put into perspective, Joe Keery just graduated college (Theater major at DePaul University, to be exact) in 2014! And here we are 2 years later and he's on one of the most talked about series in recent TV history. Like the song says, the "future's so bright, I gotta wear shades." 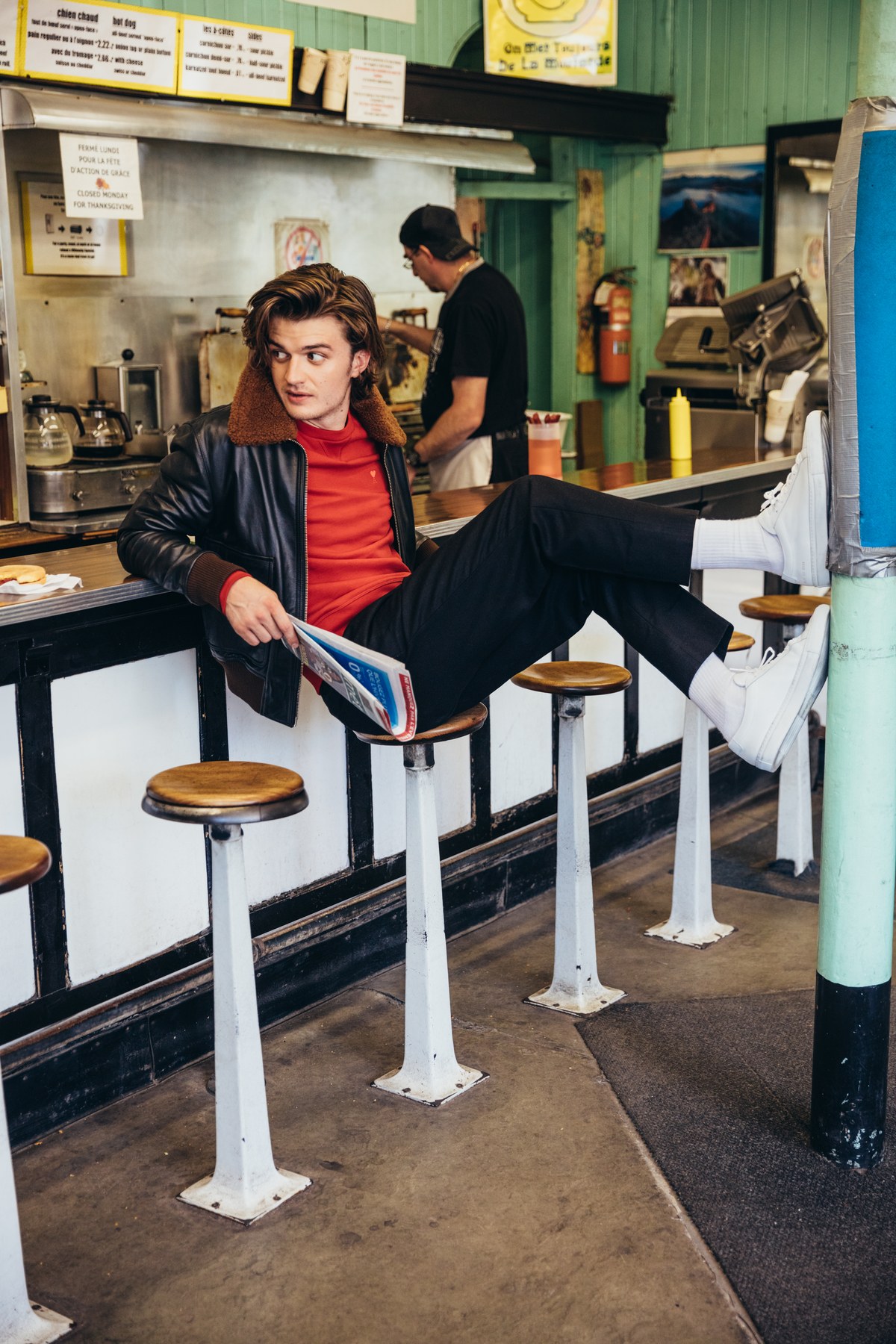