Who is Valeria Lukyanova 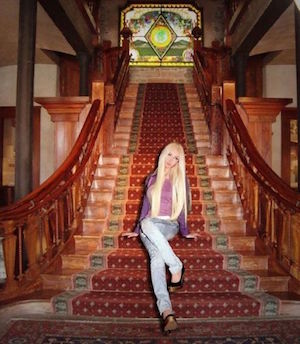 When Barbie was introduced to the world in NYC it left its mark. She was perfect, with her pencil-thin legs, chiseled figure, flawless skin, with the perfect proportion between waist and hips, and that twinkle in her eyes. Plus her wardrobe, which was perfected through time; she had it all and little girls all over the world enjoyed creating a world of fantasy around her. But there were some other girls that took their obsession with Barbie to new lengths.

One of those girls is Valeria Lukyanova, she didn't just enjoy all that fantasy world and perfection, she wanted to be Barbie and from a very young age worked on doing anything to transform herself into a human Barbie doll. Want to know more about her? Stay with us and keep reading.

Valeria Lukyanova was born on August 23, 1985, in Tiraspol, Moldovia (at that time it still was part of the Soviet Union). Her parent's names are Valery (father) and Irina Lukyanova. Her mother Irina worked for the military and her father Valery was a builder and he also worked part-time as a DJ. They did all there was in their power to provide Valeria with an ordinary upbringing. As a child, everyone doted on her. She was a very beautiful child with long blonde locks and big doll-like eyes. Well, she took that heart and uphold it as an adult going to extremes to achieve it. 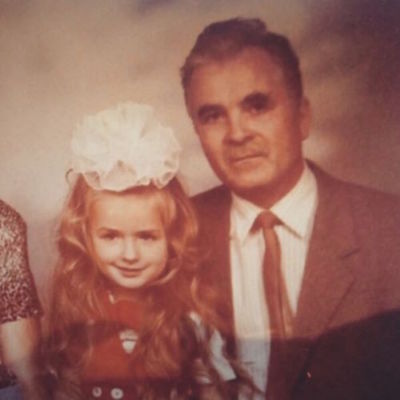 Like most little girls around the world, Valeria loved to play house with her dolls. She had an extensive collection of Barbie dolls and like to dress them up with the lastest doll fashion available. As we said before, that's what most little girls do at that age. But what set Valeria apart from the other girls is that she took a particular interest with her Barbie dolls, she seemed fascinated by their perfect plastic looks, the symmetrical dimensions... it became like an obsession. One that played a major part in what she did later in life to try to be a human doll.

Living in the former Soviet Union was no party, she faced some hardships when she was growing up. Her parents worked hard to survive and raised the family. She dreamed about fortune and success and was determined to do whatever it took to obtain them.

Before Being known as the Real Life Barbie 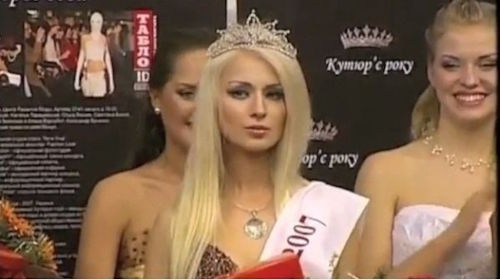 Keeping her goal in mind, she moved to Odesa, Ukraine when she was 16. There she enrolled in Odessa State Academy of Constructions and Architecture and earned her degree in Architecture. Unfortunately while living there, in 2014, the war in Donbas broke out so she had to relocate. She flew to Moscow.

While still living in Ukraine, she decided to enter a beauty pageant (her childhood beauty followed her through her teens and young adult life). In 2007 participated in the "Miss Diamond Crown of the World", a beauty contest with no rules about forbidding plastic surgery or body modification, it was opened to any women, and more than 300 women participated. Valeria claimed first place, wowing the judges with her beauty. Thank to her winning the contest, a lot of media attention turned her way. She was required to do a lot of photo sessions (some erotic ones too), and interviews, all published mainly in Russia. 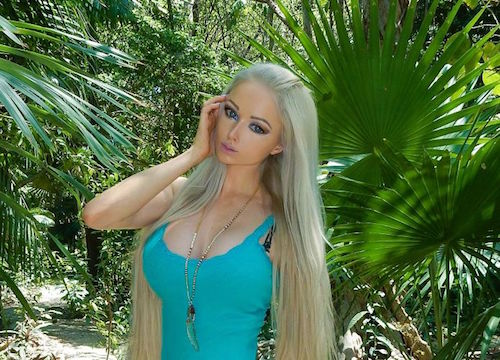 Valeria was a beautiful woman before the beginning of the transformation, but she was not satisfied with that, she wanted more, she wanted to be as perfect as all her Barbie dolls. To emulate that kind of perfection and unnatural proportions, she needed to take some extreme measures. Becoming a real-life Barbie came with a prize but she was willing to pay it.

She started her transformation by first, getting a boob job. At first, she didn't want to admit that she had breast implants, but the change was so obvious that she couldn't deny it. besides this was just the first step of all the unnatural procedures she had done to her body. She has denied that she has done any more surgeries, but that is kind of hard to believe just by looking at her images.

Even though her transformation into a flawless and perfect Barbie was done progressively, once she achieved the look, those savvy in the plastic surgery world honed in on the possible jobs done to her body and face. They assumed she had a nose job, a cheek and neck reduction, a brow lift, also that she did some shaving of her jawline, liposuction of her limbs, and a sculpted tummy tuck. She still denies having any more work done other than her breast augmentation, she claims her body proportions are the result of a very strict diet (we'll tell you about that later on) and many hours at the gym. What do you think?

Her fame as a Real Life Barbie 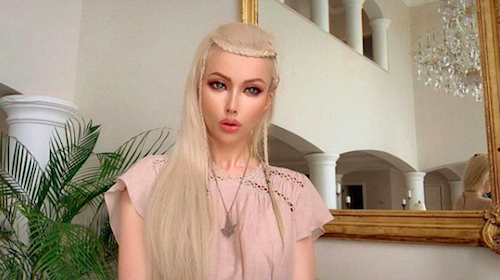 Her worldwide notoriety as a real-life Barbie started when she posted some home self-made videos and photos of her appearance on the Internet. Once those were out there it wasn't long until people started labeling her as an "almost inhuman beauty". They accused her of using some kind of image editing software to achieve that kind of look and of encouraging the objectification of women. She took the abuse but that didn't stop her, she embraced all the critics and decided to prove them wrong.

Valeria's international coverage was aided by the Jezebel blog and Huffington Post when in April of 2012 they posted photos of her, these photos immediately went viral and the commenters all talked about her improbable look and how she must have achieved them. She also appeared on V Magazine, they did a photoshoot with Sebastian Faena and an interview where she addresses the comments about her looks. She told the magazine that some people, to hurt her, spread rumors about her and retouched her photos, but that she didn't take them seriously, she was even flattered. "It's what success is like. I'm happy I seem unreal to them, it means I'm doing a good job.", she said.

In an interview on GQ Magazine, Valeria said that she wasn't all on board with the Barbie comparison, she preferred to be called Amatue, a name that came to her on a dream, and that is the name she uses on her Youtube videos. Most of these Amatue videos were some kind of transcendental self-help lectures. Valeria deeply believes in the metaphysical and spiritual worlds, she even got herself a job in the School of Out-of-World Travel, as a teacher. This international school shows students how to leave their physical bodies and visit any place they want with just their spiritual bodies.

Valeria is also a composer and an opera singer, she actually recorded two albums of New Age music, she even wrote a book about her astral trips that's called Astral Travel Amatue. In 2013 participated in a documentary produced by Vice called "Space Barbie" where she reveals that she uses her appearance to promote her spiritual ideas and that even though people called her Barbie her intention was not to look like a doll that she just liked everything beautiful, feminine and refined.

She started in her own horror movie. She made her debut on the big screen in 2016 in a movie called The Doll, a sci-fi horror movie written and directed by Susanah O'Brien.

Have you heard about Breatharianism and the "cosmic micro-food"? Turns out that Valeria Lukyanova confessed in an interview with International Business Times in 2014 that she practiced that kind of cosmic diet. An interesting choice of life to say the least, right? Maybe that's why she has such a tiny waist?! She admitted in that interview that she hasn't eaten in weeks and that she was almost subsisting on air and light.

Valeria's cosmic diet of no food and no water is part of the Breatharianism philosophy (a cult-like sect of which she was a member). They advocate in living without food or water, they say they can subsist solely on what they called cosmic micro-food.

This diet was (as you would imagine ) a total failure, but still, she follows a very strict diet and works out every day for several hours. She's still depriving herself of food as she prefers a liquid and raw vegetarian diet. She eats many hours after she finishes her gym workouts and doesn't drink water while eating. Extreme but better than just light and air. 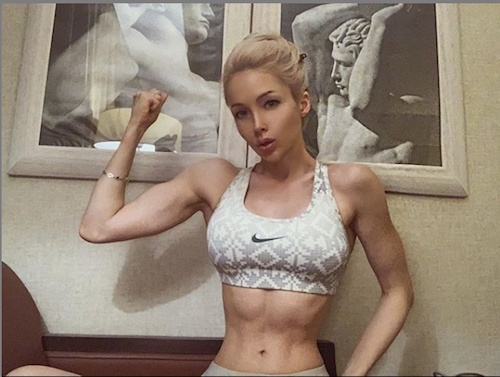 What is she currently doing

Apparently, Valeria is never satisfied with her looks and is always searching for something else. Most recently she seems to have grown tired of her human Barbie doll look. After all the time, money and effort spent on achieving her perfect doll figure, she has had a change of heart. She now aims to be some kind of bodybuilder Barbie. She wants to be more buff and enhance her biceps and abs.

She was able to capitalize on all the fame she got from being dubbed the human Barbie, so besides being a Metaphysician, medium, lecturer, mason and opera singer, she has her own online store. amatue.store, where she sells a line of all-natural cosmetics, called Samadhi. 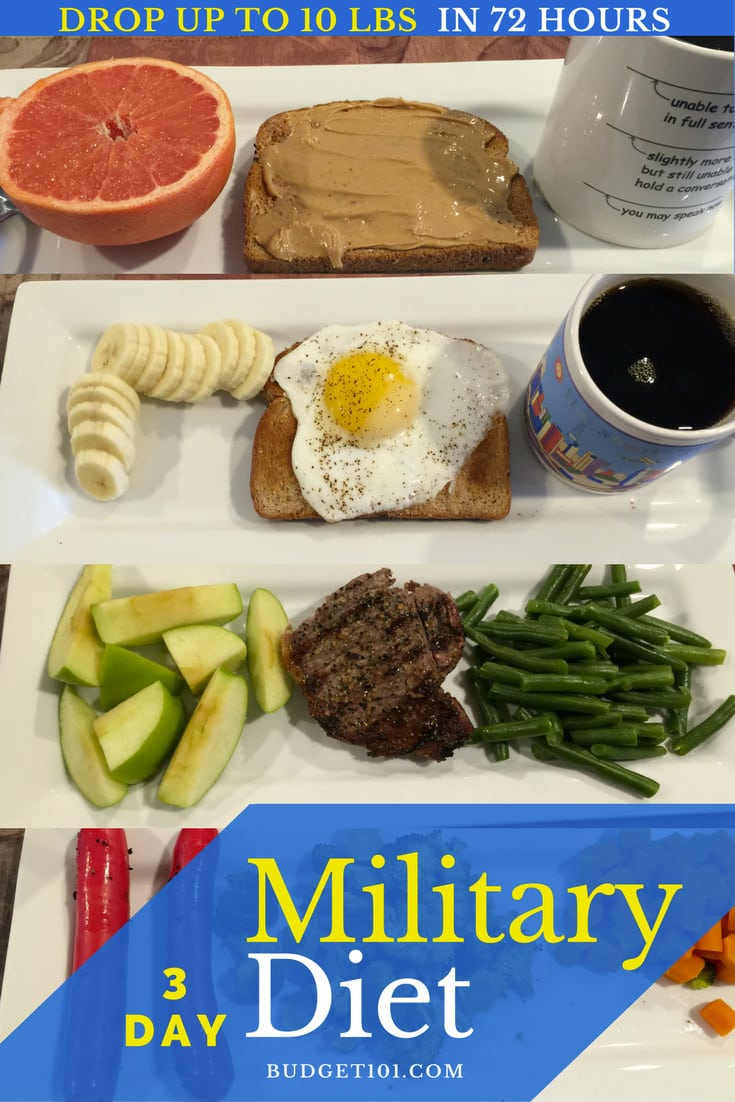 You have to try it to believe it! Lose an unbelievable 10 Pounds in 3 days with this easy military diet. Get guaranteed results. 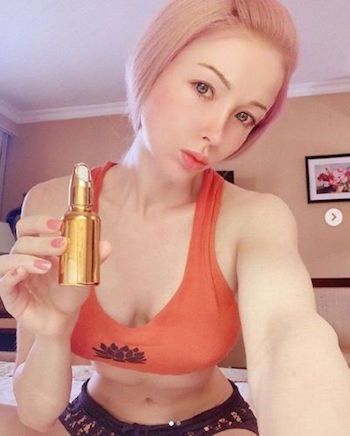 Valeria Lukyanova, the human Barbie doll is a woman of many contradictions. She is always searching more when it comes to achieving the perfect look and it doesn't seem she's stopping.