Justice League Of Her Own

Actress Gal Gadot again to the rescue for Warner Brothers and the DC universe. With Wonder Woman earning a record box office, Warner Brothers knew spending $300 million to produce Justice League was a sure thing. Actress Gal Gadot has star power now, after the roaring success of Wonder Woman. But the Justice League shoot was beleaguered from the get-go and was originally slated to shoot in 2014 under the title, "Justice League, Part 1." But "Justice League, Part 2," due for production in 2019, was put on the backburner to allow for the production of the Ben Affleck-helmed, "Batman v Superman: Dawn of Justice." Justice League: on the whole, not a bad movie. It works. DC and Warner Bros have successfully pulled off a movie that is top heavy with action heroes. The plot, though, is so BASIC. The main issue is that it's like Warner Bros threw action heroes at the wall to see which one struck a chord with the ravenous fan base, with less attention on plot and more on excessive CGI. At least Justice League has grossed $332 million in global receipts and was universally praised for using Wonder Woman and the Flash as flotation devices to rescue the somewhat basic script. C-minus, but an A PLUS for actress, Gal Gadot. It only serves to strengthen her star power, to be blunt.

Thank you, thank you for your support! I’ve been reading your posts and seeing the photos in the theaters, and ticket stubs! You are the best fans! @justiceleaguewb pic.twitter.com/4YpykvQPOg 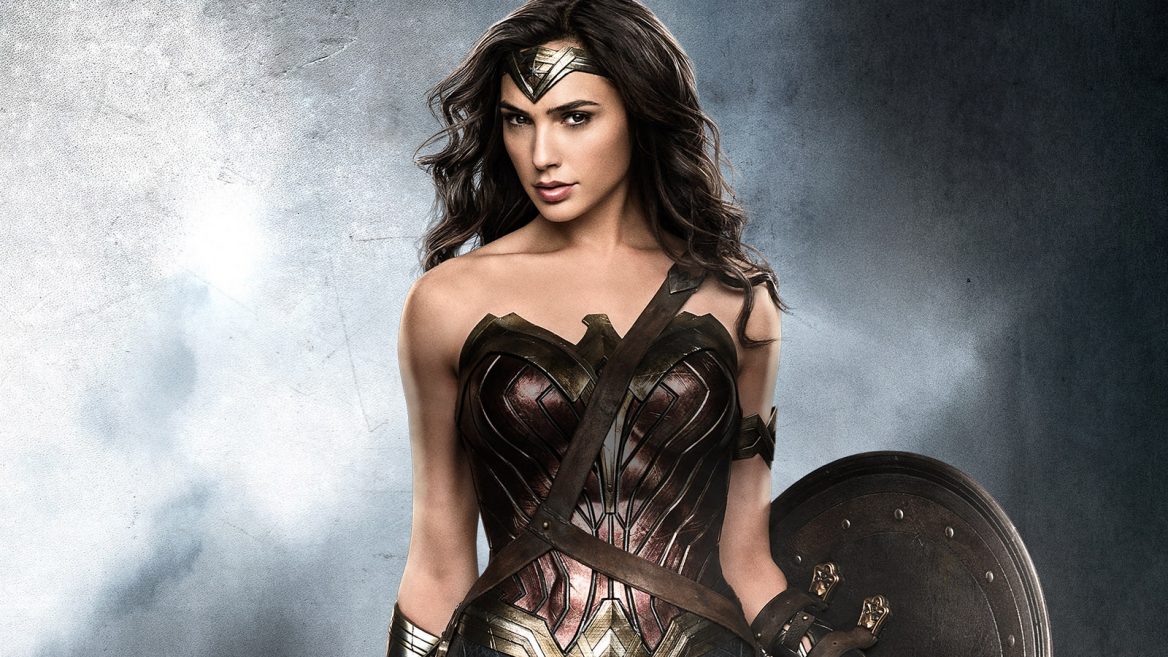 Justice League And Wonder Woman: A Match Made In Heaven

Gal Gadot is the best thing about Justice League. In a film top-heavy in male characters, she more than holds her own. Bravo, Gadot!

From Miss Israel to Wonder Woman and serious box-office clout. Talk about kicking in doors. Gal Gadot entered Miss Israel at the behest of her mother in 2004, at just a mere 18 years old. She won, much to her amazement. She found a spark within herself that catered to her inner extrovert and after completing her mandatory 2 year military service in 2008, she set her sights on modelling and then, later, Hollywood. After her debut in Fast & Furious in 2009, Gal Gadot hasn't looked back, and she was primed and ready to go when the Wonder Woman project came calling. Wonder Woman broke all box office records and features a leading actress of foreign descent, in an iconic role AND directed by a female, Patty Jenkins. Just how much has Wonder Woman made, in 2017? Well, the budget was $149 million and to-date, the movie has raked in over $821 million worldwide. Actress Gal Gadot has successfully transitioned from model to actress, in a big way. 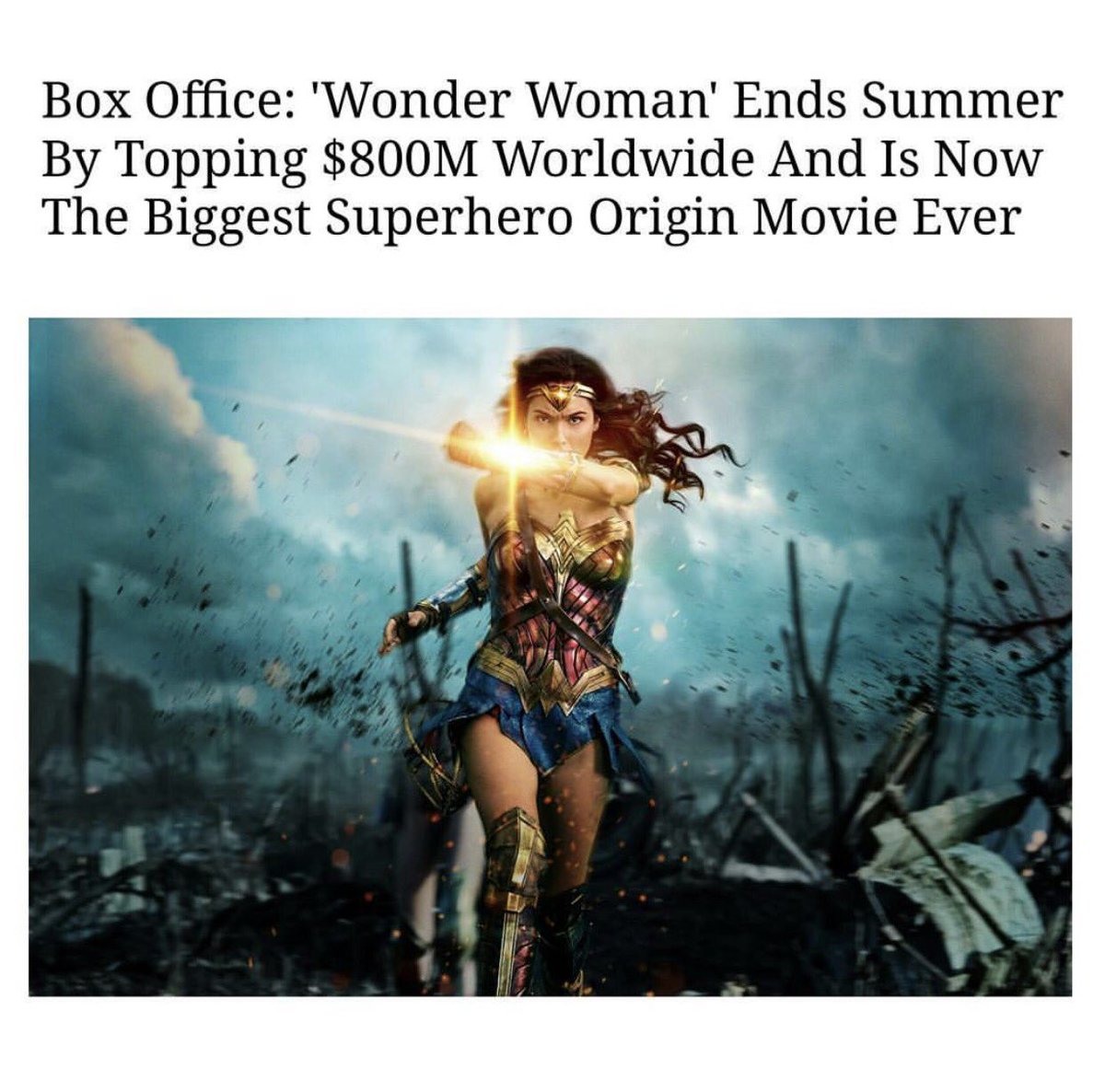 Gal Gadot's Wonder Woman is THE most successful superhero origin movie of all time. Incredible. Over $800M!

One of my favorite workout routines! #boxing #workhard #workoutwednesday

Wonder Woman's Gal Gadot finally acknowledged the clunky backstory for her character was a mistake, at the Justice League press conference in China in 2017. Let's just say it was an admission with a SMALL "a." Gal Gadot is certainly not in the process of upending the apple cart by any stretch of the imagination, but she is unafraid to voice her opinion on Wonder Woman's line, that had her uncharacteristically say that she'd been absent for helping mankind "for over 100 years." Warner Bros should have done a little more fact-checking on the iconic Wonder Woman, so that a storyline, or rather, a plot drop via ONE LINE of exposition, should be on par with the core values of the hero. Fast forwarding to the future, which is what Justice League IS and out of the war torn Wonder Woman of the 1940's, the writers should have reflected what the storyline had set up and not just hung its hat on dramatic prosaic like "100 years ago, I walked away from mankind." It's all about the big box office, baby. Wonder Woman is clearly the front-runner and break out hit of 2017 and in order to maximize the box office draw, her franchise is now the IT project. Wonder Woman 2 is scheduled for release on December 19th, 2019.

“Sometimes in a creative process you establish something that is not necessarily the right decision, but then you can always correct it and change it. Wonder Woman will always be there, as far as she’s concerned, for mankind.” 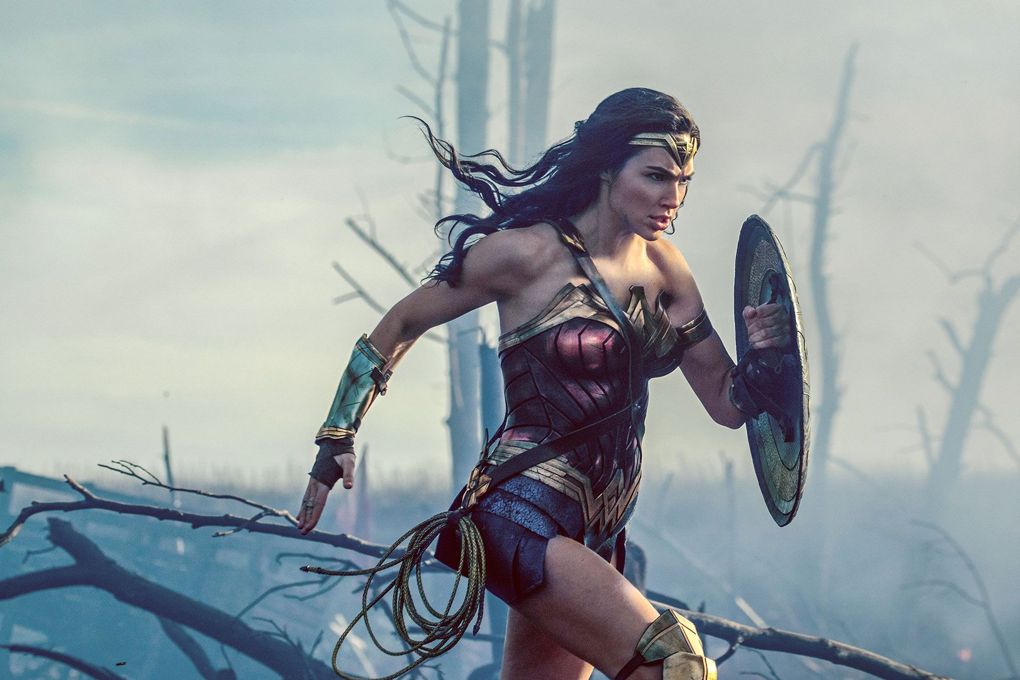 Breaking down stereotypes and crushing the idea that a woman cannot be a box office success as a superhero, Gal Gadot cleans up and ups the ante for actresses in Hollywood to demand respect and equal pay.

“100 years ago I walked away from mankind. From a century of horrors. Man made a world where standing together is impossible.”

You can't do an article on Miss Israel turned actress, Gal Gadot, without talking about Batman v Superman: Dawn of Justice. Ever since Wonder Woman saved Batman's ass, audiences worldwide have never been the same. As a fan girl and comic reader, Wonder Woman has been through many iterations and costume changes over the years and she seemed to have completely lost her way in the 90s - she didn't even have her trademark outfit - she had PANTS. So it was a happy day when viewing Batman v Superman: Dawn of Justice to see the genre re-introducing audiences to Wonder Woman in all her glory. The movie is also responsible for giving us Gal Gadot, who at only age 32, has a long career ahead of her. Gal Gadot not only saves this movie, as a new kind of empowered Wonder Woman, but she has has jump-started new life into the DC brand, in one fell swoop. Batman v Superman: Dawn of Justice may be the usual CGI heavy tentpole fare, but it is Gal Gadot, Wonder Woman, who steals the show. Way to go, Gadot.

Actress Gal Gadot got her career start with Fast & Furious. You could say that Gal Gadot owes her career to the late Paul Walker and Vin Diesel. Gal Gadot has little to no screen credits at the time and the actors fought for her to join the franchise. When you realize this, it makes sense that she showed up to present the MTV "Generation Award," to the cast and crew of Fast & Furious. Fast & Furious has been one of the more enduring action franchises and the first movie opened 16 years ago! Wow, what a history. SPOILER ALERT: Gal Gadot was a supporting cast member of Fast & Furious, playing Gisele Yashar. The character sacrificed her life to save her on-screen lover Han Seoul-Oh in Fast & Furious 5, but the role definitely put Gal Gadot on the short list for leading ladies in Hollywood, as a result of her charismatic turn as Gisele Yashar. 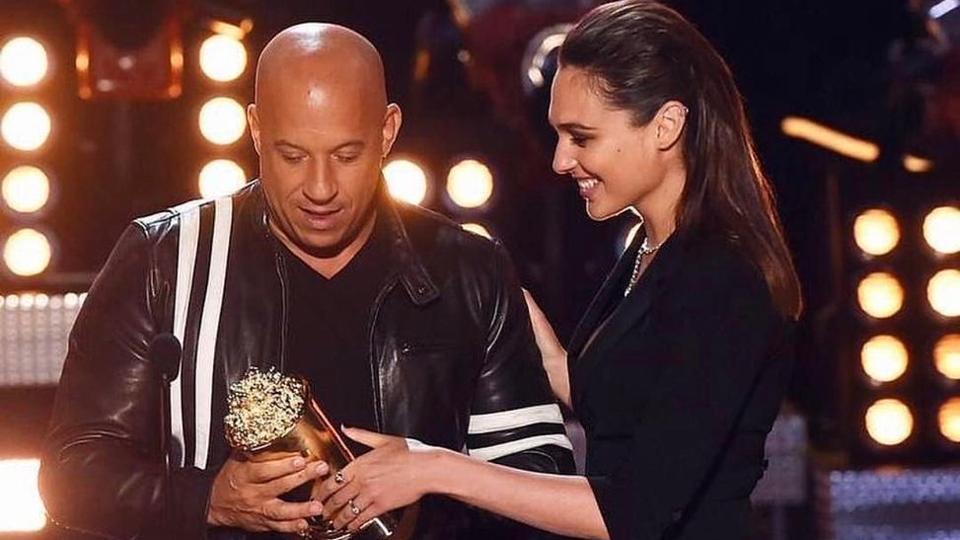 Gal Gadot credits Vin Diesel with her start in acting and she was on hand to give the Fast & Furious franchise the MTV Generation Award this year. Paul Walker would have been proud. 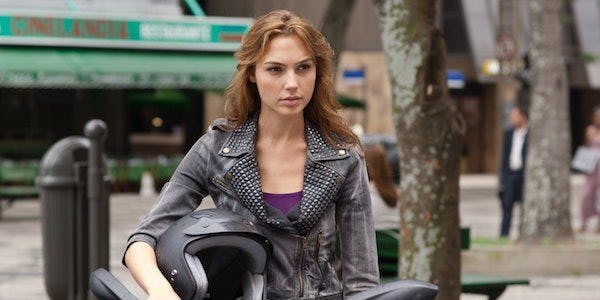 "Before I was Wonder Woman, I got a call that would change my life. I was asked to be a part of the Fast And Furious franchise. The stunts may get bigger and crazier, but the heartbeat of the franchise, the reason people keep packing theaters over and over again is family. A diverse group of people who stick together, no matter what, through onscreen adventure and real-life tragedy."

Gal Gadot's tribute to Paul Walker and the Fast And The Furious franchise.

Gal Gadot recently pulled out of an awards ceremony honoring Brett Ratner and has since gone on the clarify her stance on sexual harassment within the entertainment business. With her net worth in the stratosphere and the current power of her box office draw, Gadot really is serving as Wonder Woman in real life by standing in solidarity with the hundreds of actresses crying out to be heard.

“I think that this behaviour should be condemned. It’s unacceptable and no one should tolerate this and when people who have power use their power in order to gain something and get something in a very unethical way; I’m hoping that the trend of this power usage will stop.”

Born in Petah Tikva, Israel and growing up in Rosh HaAyin, Gal Gadot got her first taste of being a warrior. Part of the Israeli culture means serving 2 years in the military. It is mandatory. And Gal Gadot excelled, becoming a weapons instructor. In the grand dreamscape of the divine, Gal Gadot's name means "wave riverbanks," in Hebrew. Actress Gadot is of Polish, Austrian, German and Czech-Jewish heritage. She has a younger sister, Dana and majored in biology in high school. After a fitful start in modelling, Gal Gadot went on to study law at Herzliya College in 2006. Gal Gadot married Yaron Versano in 2008 and together, she and the real-estate wunderkind bought and sold a luxury hotel in Tel Aviv for $26 million in 2015. The happily married young couple have two daughters together, named Maya and Alma. 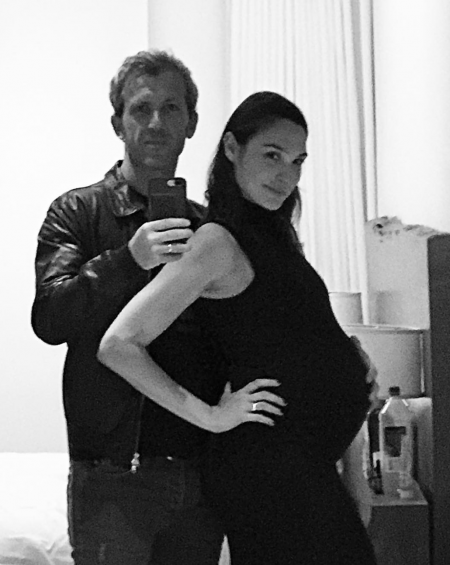 “I feel that I’ve got the opportunity to set a great role model for girls to look up to a strong, active, compassionate, loving, positive woman and I think it’s so important. It’s about time that somebody will do that and I’m very privileged and honored to be the one.”

Gal Gadot on being an icon.

Gal Gadot is one of the most down-to-earth celebrities around. She is quite happy to play the role of mom, when she is not acting and gets the humor in the fact that her children don't care if she is Wonder Woman - as long as she puts food on the table; that's all that matters to them. And all that matters to Gal Gadot is being the best mom she can be.

And then we were four... She is here, Maya. I feel so complete blessed and thankful for all the Wonders in my life #family #newborn #grateful

According to "Celebrity Net Worth," Gal Gadot is indeed a force to be reckoned with. Her net worth to-date is a decent $8 million and likely to rise by Wonder Woman 2 in 2019. There was a social media wildfire that was ignited recently around the net worth of Gadot, or rather her paltry $300,000 paycheck for the over $823 million dollar payday to the studio, that was Wonder Woman. The rumors continued, with fan outrage at the disparity that Henry Cavill reportedly made $14 million for "Man Of Steel," in comparison to Gal Gadot's wage of $300k. Whether the rumors are true, or not, Wonder Woman was the blockbuster of 2017 and it's a shoe-in that Gadot's net worth and movie asking price is in the millions now. For a woman who seemingly single-handedly helped Warner Brothers mop up the moulah of the gravy train that is Wonder Woman, whilst taking a strong stand against sexism; Gal Gadot's personal net worth can only reflect that integrity, rolling into 2018.

Get ready to experience the ✨WONDER!✨ #WonderWoman

What's Next For Wonder Woman Gadot

As the sun sets on Themyscira, Wonder Woman's fictional homeland, actress Gal Gadot is rumored, according to Variety, to be in serious talks to star in the drama "Ruin," as well as being confirmed to star opposite Bradley Cooper in "Deeper," a heavy think-piece, by Max Landis. One thing is for certain, Gal Gadot is only just beginning her reign in Hollywood and is in the front seat to pick projects by hand, instead of struggling for the opportunity to read for a role, and THAT makes all the difference. By her actions, actress Gal Gadot is showing her children that being a woman in the business of Hollywood is something to be proud of and a safer place, because of her. Mazel Tov.