Gossip surrounding celebrities and their personal lives is not a new phenomenon and has been around for a long time. People love to chat about what the hot and pop stars of the current age are up to. Their relationships and romantic lives are under scrutiny all the time. While there are reasons, this attitude towards celebs invades their privacy and can be harmful in some ways, this new bit of information regarding Elon Musk's family life is worth the discussion.

Musk is the CEO and founder of SpaceX, a space transport manufacturing company based in the US. He first became a popular figure with the Tesla sports cars.  Among other things, Elon Musk has also made a cameo on the hit comedy television series that is titled the "Big Bang Theory." The episode was included in the ninth season and given the title of "The Platonic Permutation." This 49 years old celeb has had two marriages and so far, a total of six children with X Æ A-Xii being the seventh. The rest of his children have been given what you would categorize as "normal" names; for example, Griffin, Xavier, and Damian. Yet, for his most recent offspring, he has chosen a most unusual name.

The mother of this child is a Canadian musician, Claire Boucher, who goes by the stage name of Grimes. With millions of worldwide streams, she has made her place in the Canadian music industry clear. When asked the meaning behind their newborn child's name, Musk explained that Grimes was responsible for the first half while Elon contributed "A-Xii." Initially, they had called their son X Æ A-12, but later on, decided to replace the number with its Roman numeral alternative. Elon came on Joe Rogan to say in explanation of his child's name:

"A-12 is my contribution. Archangel 12 the precursor to SR 71, the coolest plane ever."

Whereas Grimes mentioned in a tweet that the name as a whole meant "metal rat." Although it may seem strange to name your baby after a not so loved creature, we suspect it points to the Chinese year. 2020 according to Chinese culture and calendar is the year of the rat. Her tweet stated:

"X, the unknown variable ... Æ, my elven spelling of Ai (love &/or Artificial intelligence) ... A-12 = precursor to SR-17 (our favorite aircraft. No weapons, no defenses, just speed. Great in battle, but non-violent + (A=Archangel, my favorite song)."

Yet there is a bit of a discrepancy when it comes to the pronunciation of this unique baby name. Musk explained that the Æ is pronounced ash, while Grimes claimed Ai was the right way to say it. It is not clear yet whether they will be using Elon's or Grimes' version. But it seems as if they will be forced to give the child a more natural alternative nickname. Otherwise, it's going to be a bit troublesome for the young baby to introduce himself when the time comes for kindergarten and other activities.

Who is Gowon from Loona?

Gowon is a member of the K-pop band called Loona. This South Korean band has a total of twelve members, all of whom are female musicians. Their genre revolves around electronic pop and dance music. Loona has many awards to its name, including the award for Best Korean Act at the 2018 MTV Europe Music Awards. It is fair to say they have made a good name for themselves in the Korean Pop music culture. They debuted in 2016 and are presently still working on new music and albums. The band has three subunits, namely Loona 1/3, Loona Odd Eye Circle, and Loona yyxy. Gowon is a part of the third subunit, yyxy, along with three other band members.

How did Gowon become godmother to Musk's baby?

It all started when the Canadian musician, Grimes (mother to Elon Musk's child), posted a photo on Instagram. The award-winning singer with a net worth of around 3 million dollars posted a stunning photo of herself in black and white. A fan commented under this post asking Grimes an interesting question about her newborn baby, X Æ A-Xii.

The fan inquired about the godparents of the much talked about the child. They speculated that Gowon, a member of the K-pop music band named Loona, was the godmother of her son. This aroused an interest in the fan bases of both Grimes and Loona. Grimes's reply was a short and straightforward, "yes," yet it managed to send the internet into a frenzy.

Some people are also suggesting that Claire (Grimes) meant the comment in a sarcastic or joking way. There haven't been any updates from either side, but that Instagram comment has now accumulated thousands of likes. Grimes has, in the past, played pranks with her fans and is known to be a bit of a "troller." There can be true in the situation since Grimes and Gowon aren't strangers. They have a friendly and cordial relationship, which is seemingly not just a professional relationship but has developed into a good friendship.

In the year 2018, two years after Loona debuted their music in the k-pop industry, the Korean band approached the 32 years old singer from Canada. They were looking into a collaboration with her. Grimes soon responded to their DMs and was enthusiastic about featuring in the band's album. She informed fans that she had been working with the girl group for some time, and they had finalized the collaboration. They released the track, which was given the title of "love4eva". At the start of the song, you can hear Grimes's contribution. It was quite an energetic song with a fun and popping vibe. The music video has gained an approximate of 11 million views and twenty-four thousand comments as of date!

As with many other fandoms such as Potterheads (fans of the Harry Potter series and franchise), supporters of the all females band, Loona, gave themselves a catchy name of the Orbit. One of these so-called "orbits" compiled a fan edit on Instagram in which they addressed the fact that Gowon might be one of the godparents of Elon Musk's youngest child. The mother, Claire, reposted this video. This is yet another sign that the rumors surrounding this whole scenario are, in fact, the truth.

The feelings of friendship and appreciation were mutual. The band also said in an online post that "Grimes. You are our Loona's goddess." It is clear that these two have good relations and admire each other as artists very much. But the friendship is not limited to Grimes and Gowon. Even Elon Musk had some good things to say about the k-pop stars. He tweeted "LOONAA" and added a bunch of emoticons to show his excitement over the collaboration.

Anything happened so far?

Ever since Elon and Grimes first announced that they had decided to name their baby, X Æ A-Xii, the internet was obsessed. With hashtags about the infant trending on Twitter and a tremendous number of memes regarding his name on Instagram, it is fair to say the toddler has already gained a legendary status. Every new update regarding the couple and their unique named baby floods our feeds and social media timelines with news, jokes, and speculation.  This latest bit of gossip about X Æ A-Xii's godmother has stirred up the virtual world again, but other than that, there are no further updates about the child or his parents.

Related Article: Grimes Wiki: All About Elon Musk's Girlfriend and Mother to X Æ A-12 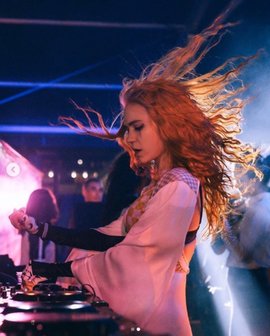 Everything about Claire Elise Boucher, also known as Grimes

Elon Musk is one of the quirkier celebrities and has an eccentric personality. With a net worth of about 83 billion dollars, he is, to say the least, doing well.  Grimes, too, has an exciting and unorthodox style and self-expression. With such vibrant and booming parents, you can't expect the child to have a boring name. And X Æ A-Xii is far from boring. Despite all the jokes, it is best to respect the decision of these two celebs. We can’t wait for the news to be confirmed in more serious ways. That will surely give Gowon’s fans a reason to celebrate!