Who Is Cari Champion 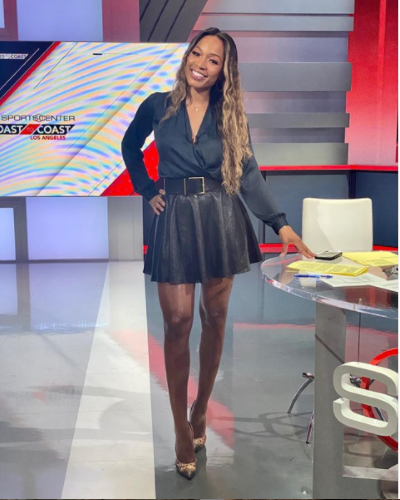 Are you a sport's fan? Do the name Cari Champion rings a bell? If not, then we'll tell you a little bit about this charismatic presenter. Who is Cari Champion? Cari was born in Pasadena, California in June 1978. Cari's parents are Dylan and Marian Champion. His dad Dylan has his own business and was away a lot when Cari was growing up, so her mom Marian was in charge of raising Cari and her 3 siblings, a sister who is older and her and 2 younger brothers.

Cari has had a very successful career in the TV industry. She is a slim woman with a very attractive personality and people that know her have expressed that she's very down to earth, very humble, and is warm by nature. Thanks to her work on TV and her good looks she has a huge number of followers on her social media accounts like Instagram and Twitter  Cari studied her junior year in Washington and then she attended UCLA  where she majored in English and minored in Mass Communications, she graduated in 1998. During her time at UCLA, she wrote for the Daily Bruin (UCLA's student newspaper) and her inspiration to pursue a career in journalism where the UCLA alumni like Matea Gold of the Washington Post, who at that time was the editor in chief of the Daily Bruin.

Her majors in college gave her the tools to start her career in journalism. She received great advice from a local news anchor, this person told her that she needed to learn to write her own stories. That's exactly what Cari wanted to do, she wanted to tell important stories, whether they be news, sports. or entertainment. She wanted to give voice to people that didn't have a voice. One of her goals was to transform the negative stereotypes of Black Americans. 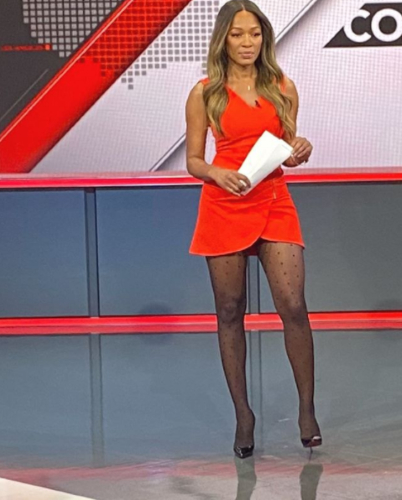 Her broadcasting career started in several television stations. Her first reporting job was in West Virginia where she was a general assignment reporter. She was basically a one-man-band and she covered everything, not just sports. However, she had the chance to cover many sports news, and she got hooked. She said in an interview that she just knew that sports were a natural fit for her. She liked that athletes always had a powerful story to tell.

She then was a reporter for Orange County News Channel in Santa Ana, California. After that, in 2002 she moved to Florida to join WPTV-TV in West Palm also as a reporter. She also worked in Atlanta as an anchor for WGLC-TV in 2007. While working in Florida, she covered a lot of stories, and this is where she discovered her affinity for tennis especially after covering the William sisters. Venus and Serena were responsible for Cari's love of the sport. She auditioned for the Tennis Channel's news department, she was one of the 3 women selected to join the network in 2009. She worked as a courtside reporter and then as an anchor for the channel's Court Report news segment.

Her Breakthrough in ESPN and Her Departure 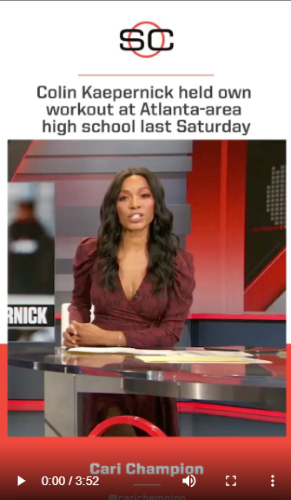 Her breakthrough career in ESPN started in October 2012 when she was picked up by the network to host their live debate show First Take. As host of First Take she had to moderate debates between two sports experts Skip Bayless and Stephen A. Smith. Cari has expressed that from the two of them, Smith is the one with the biggest and strongest personality. Going with her goal of writing and telling her own stories, she proposed a couple of ideas to the network and that's how she made her journalistic debut at ESPN.

In November 2014 she had the chance to profiled and interviewed American football quarterback Cam Newton in a segment for E:60 (a sports newsmagazine broadcast by ESPN). Thanks to her hard work she was promoted in 2015 and became the anchor of Sports Center which is the flagship program of ESPN. Being the anchor of Sports Center was an eye-opener for Cari because she realized that her purpose of showing brown girls "how it's done" could finally become a reality. And that's how she did it for 7 years, she showed them they could be smart, sassy, intelligent, and sexy while hosting a sports show.

ESPN was a wonderful platform for Cari but after 7years of being part of the network. she felt that she wasn't growing anymore so it was time to leave the network. She took the decision after consulting with family, mentors, and friends and made the announcement in January of 2020. She made it public via her Twitter: "Over the past 7 years, I've grown from hosting First Take to having my own show on Sports Center, and experiencing so much more in between."

Want to know more about Cari? Here are 10 facts you may or may not know about her.

1. She interned at CNN 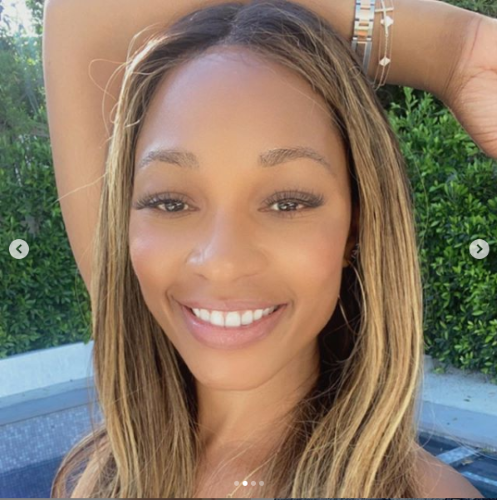 Cari knew from early on in her life that she wanted to be a journalist, she had the chance to experience how it was done during her junior year in college by being an intern at CNN in Washington, D.C.

2. She was almost fired when she was an anchor in Atlanta

While working at WGCL-TV she was fired for allegedly uttering a profanity over the air. Cari appealed the firing, she claimed that she did not say any profanity. The director of the show hadn't cued her and he co-anchor following a commercial break and the mic pick a conversation where she called a screenwriter something that could've sounded like the F-bomb. She was rehired but left the station two months after.

3. Cari worked as an entertainer reporter for other networks

When she was working at the Tennis Channel, apart from working as a courtside reporter, she had other gigs in networks outside the sports world. She worked as an entertainer reporter for the Starz Network, The Insider, and Hollywood 411.

4 Her most challenging interview was Andre Agassi

When she started working at the Tennis Channel she had to interview Andre Agassi about his upcoming book. It was challenging because she only had 10 minutes to cover many topics including a revelation about Agassi's drug use. To her surprise, the athlete wanted to talk about it and she ended with a 30-minute interview.

5. She was featured in Vogue

Vogue magazine did a featured of Cari Champion on the June edition of 2016, where she talked a little bit about everything and how she calls the shots her way.

ESPNW Presents Be Honest With Cari Champion was more like a kitchen conversation among friends. She got athletes to talk about pop culture and artists talking about sports.

7. She was a basketball fan

She couldn't play the game because, by her own words, she was physically awkward and uncoordinated but she loved the game when she was a kid and was a fan of the Lakers. 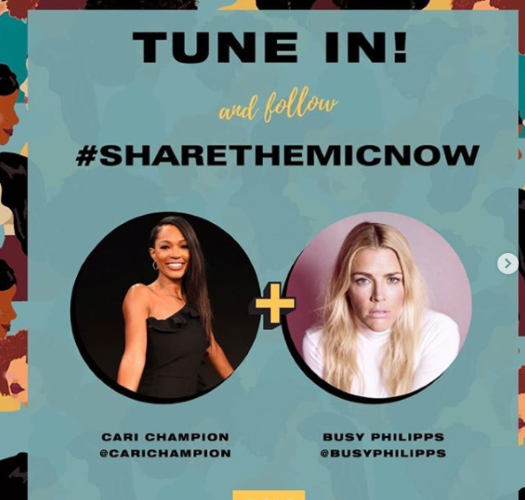 When possible she donates her time for projects that try to amplify the voice of black people. She worked in a project called Shared the Mic where black women took over platforms of white women with bigger platforms to tell their stories.

Since a really young age, Cari developed a skincare routine. She not only takes away her make up every night, but she also washes her face and then applies toner. moisturizer and eye cream religiously every day.

10. She likes to wind down with TV shows

She escapes her very busy days by finding ridiculous TV programs and binging on them.

What Is She Up To Currently? 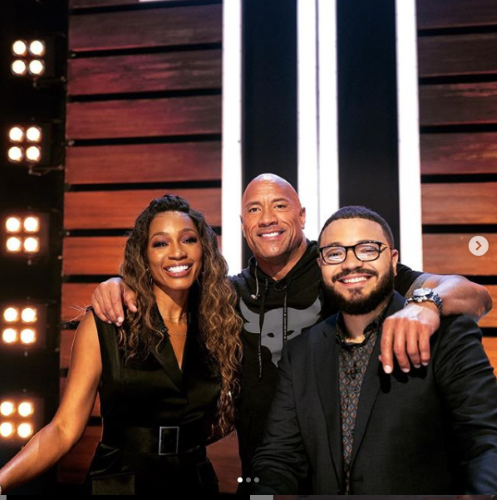 Since leaving ESPN in January of 2020, she has been hosting NBC's The Titan Games, which is an athletic competition. Her co-host is no other than Dwayne Johnson, "The Rock". She also hosts a show for TNT called The Arena, this one alongside Charles Barkley, Draymond Green, and Dwayne Wade. This shows focuses on social-justice issues.

The most recent project of Cari Champion is a new weekly talk show with Jemele Hill, that Vice debuted this summer. The show called Stick to Sports will unpack the biggest topics and news of the week and it will cover a variety of topics from culture, politics, business, and of course, sports. Cari and Jamele have worked together before and she's thrilled to work with her again because they have a common goal and are committed to making sure black women have a true platform where they can be heard.

Related Article: Jillian Mele: Everything About Her Life and Relationships 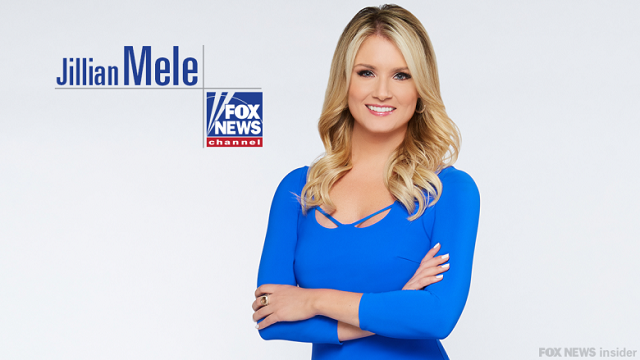 More about this beautiful TV presenter and her relationships 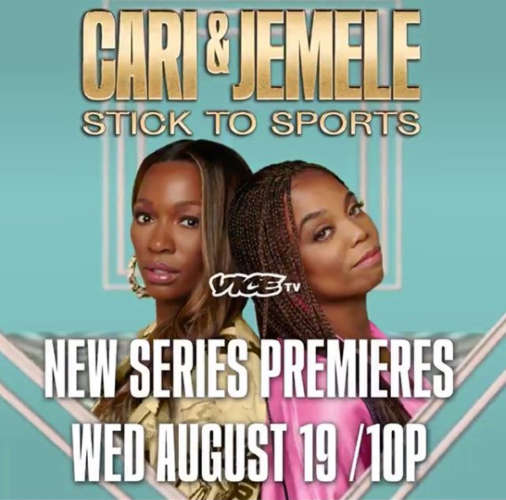 Cari Champion knew from the very beginning that she wanted to make journalism her career and worked hard to achieve her goal. She now is a well-known and respected TV personality set on giving Black women a platform where they can tell their own stories so they can be heard and be respected. She's set on building her own communications empire where she can continue to call the shots her way.