Committed to the craft

Acting is a funny business as it transforms you into something that you are not in real life. For instance, Dan Stevens played the role of the Beast in the film “Beauty and the Beast”. Emma Watson and Dan Stevens are putting up a great effort in bringing the characters to life in the new video that has surfaced recently showing the filming of the “Beauty and The Beast” Remember, it is not animated, so it becomes all the more difficult. Behind the scenes video of this film captures the handwork of both the actors Dan Stevens and Emma Watson. How can you keep a straight face in front of a person who is wearing this ridiculous onesie? 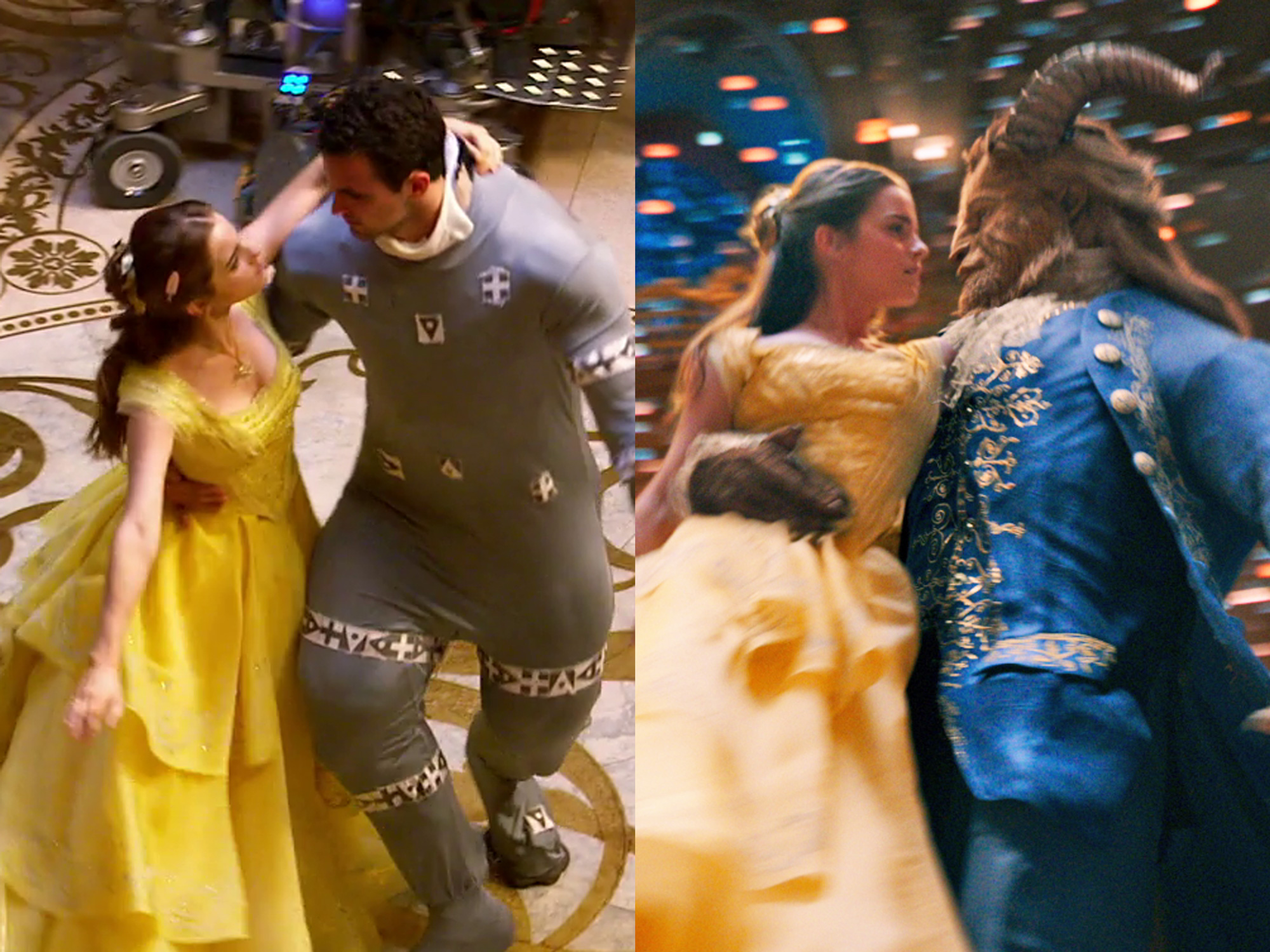 Emma Watson is being asked this question repeatedly. Though time and again Emma Watson has been able to surprise her fan with her acting, her quotes, and responses, still people are going gaga over her stellar performance in the film opposite Dan Stevens. Twitter is going crazy over this newly released video. You just can’t keep a straight face when you look at the video because of this silly gray onesie that Dan Stevens is wearing. That being said, it’s noteworthy that Emma Watson actually gave those intense expressions looking at Dan Stevens in that suit. Their dedication is on another level and hats off to these two brilliant actors who have done an amazing job in the film. You will run out of adjectives to define and praise the performances of Emma Watson and Dan Stevens.

Because you deserve the best. 💐😈 Follow @disneyvillains to flex your fiendish side.

Dan Stevens getting into the character of the beast

We all know the story of a belle who falls in love with a beast, but playing the characters are not that easy. Dan Stevens had to wear a 40-pound gray onesie along with caps and stilt for the character of the beast. A hell of a lot of CGI is being used, but in order to build the effect and make it look real, Dan Stevens had to wear that stupid onesie that was padded. The padded onesie made things uncomfortable for Dan Stevens, but he didn’t complain. He understood the need of the hour and his love for acting made it possible for the filmmaker to get exactly what they wanted. 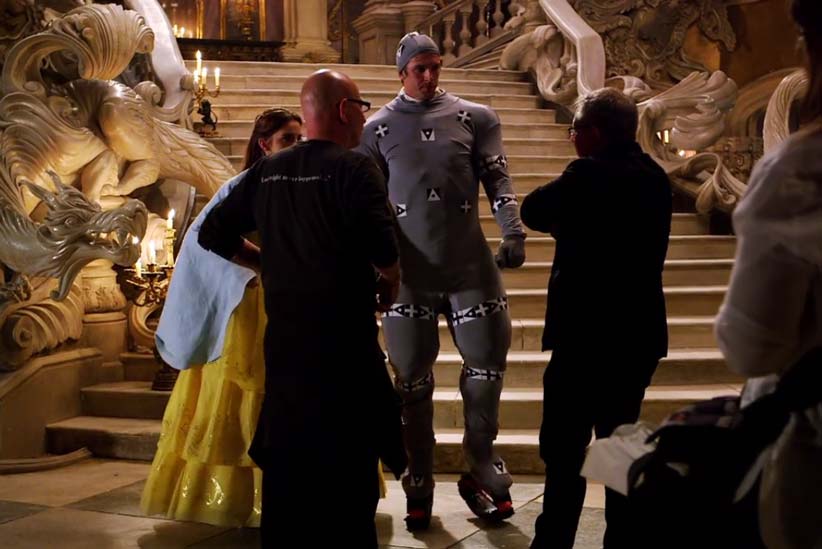 Look at the footage, don’t you think it was too awkward to move around in that padded onesie? Nobody’s complaining, however, as the film has turned out to be the highest grossing film of the year and the performance of Dan Stevens and Emma Watson is highly appreciated. Dan Stevens’ hard work has paid off and though he was looking damn ugly while filming still he has managed to win hearts. Many people across the globe have watched the movie and appreciated the work of the actors, but now when they are getting a glimpse of how the film was actually made they are even more impressed with the talented Dan Stevens and Emma Watson. The character is of a beast, but how do you make people believe that you are actually a beast with your mannerism and voice? This is the sign of a truly great actor that they make every character they play look real and believable (even when in reality, they are nowhere close to the character). Not only moving in that 40-pound funny thing, Dan Stevens has also danced in that body-suit. How did you even make it possible, Dan Stevens? 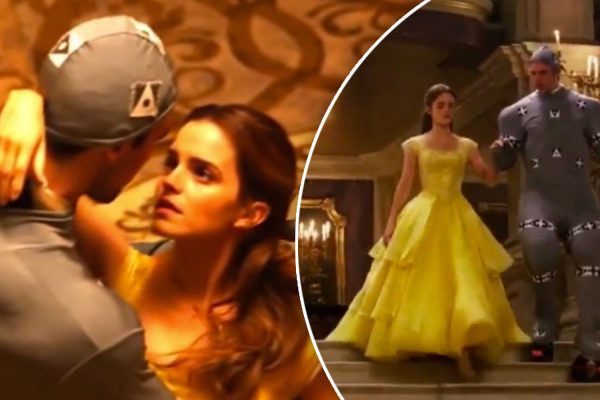 Dan Stevens should come out in the open and share his stories about what he felt when he went into that suit and to the skin of the character of the beast. Though he said in one of his interviews, that it was a huge thing to get the combination right in all the department starting from dance, movement, singing, and vocal exploration. I guess this is the sign of a great actor that they can slide into any character with élan and go to any extent to make the audience believe of their existence. The suit and stilts were important to scale the character right and track the movement of Dan Stevens for superimposing the hairy feature of the Beast on Dan Steven’s body. Throughout the movie, Dan Stevens had worn the suit so that the post-production team can do the CGI tricks accurately. 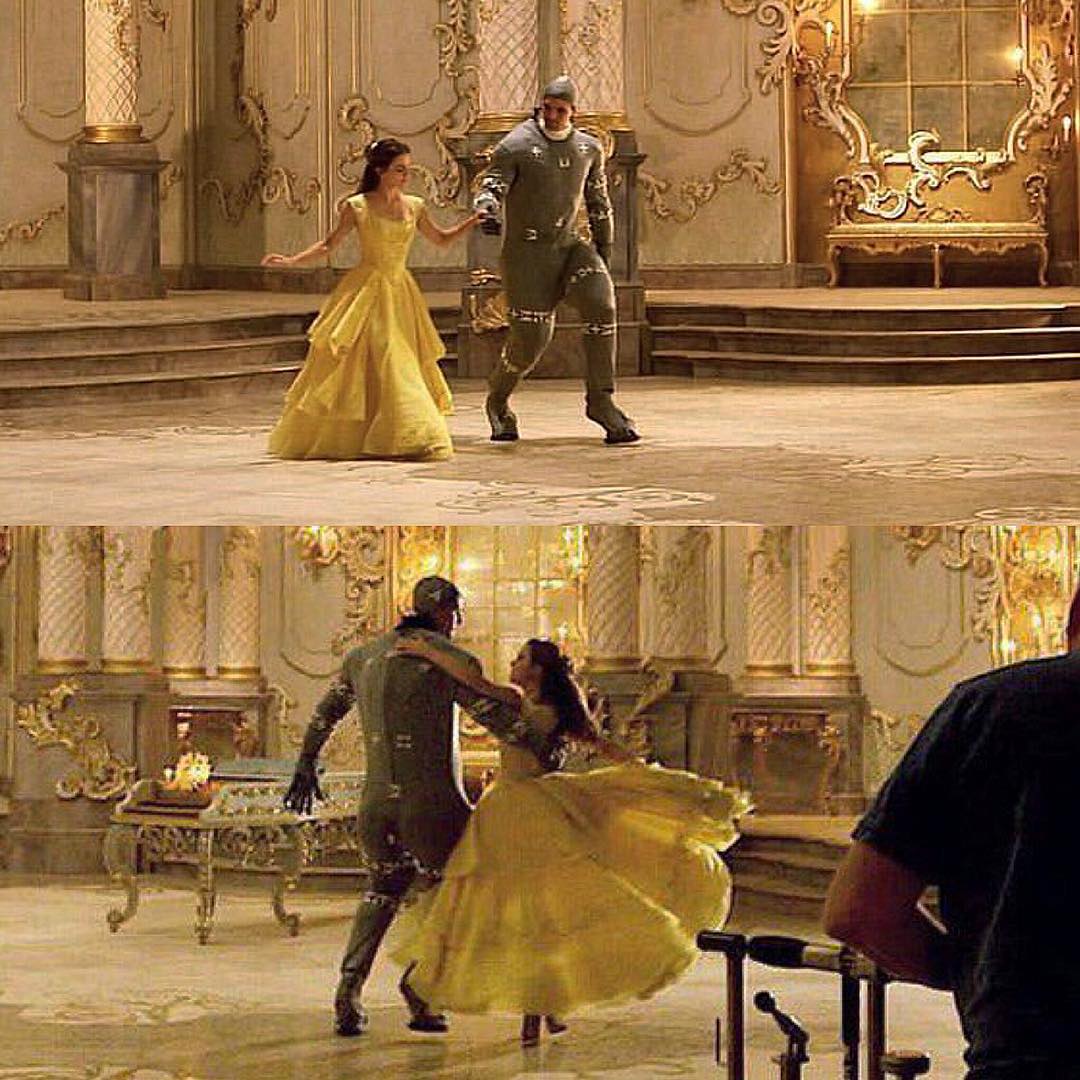 Now coming to Emma Watson, you deserve all the awards and recognition for this role of yours. We can hardly stop laughing while watching the filming and you were actually standing there, looking into his eyes and blurting out the romantic lines. Hats off to you and your mind-boggling performance. Falling in love with a padded suit guy who has a funny cap and stilt in place, is highly commendable. Yes, we know you were playing the character, but then again we will keep asking you one question and that is how did you make it possible and so believable? When we watched the movie we could feel your emotions in your eyes. Now after watching the behind the scenes video, we are completely awestruck. It is not easy to control your laugh and give a strong and intense performance like that. Have you ever tried to control their laughter and keep a straight face? Some might nod their head and say yes they have done that, but then the question is for how long? It might be for fraction of minute, but look at the video, Dan Stevens has only worn this funny gray suit all along and Emma Watson is seen keeping her poise and grace all throughout and not for once you will feel that ‘belle’ is missing from the character.

We all are aware of the animated version of the movie of the same name where “Belle” falls for the beast, but that was animation. Playing ‘Belle’ in real and coming up with expression where you start believing that the character ‘Belle’ played by Emma Watson has actually fallen for the beast needs dedication of different level. Emma Watson has acted like a pro. Acting is a serious business but at the same time, it can turn out be a funny affair too. You will get to play a character that is far from real. Being a human, how can you start behaving like a beast? But, the actor’s job is to make the audience believe in the character that they are playing. We all know that a beast man is not for real, but have you ever felt disconnected from the movie due to this? No. Why? Because Dan Stevens made us believe in that beast even when he had to put himself in a funny and awkward position in that suit. Dan Stevens had to believe in that beast first and understand the character before portraying it on the screen. If as an actor Dan Stevens couldn’t relate to the beast on an emotional level, then it would have been quite impossible to make the character come to life so effervescently. This kind of film requires a lot of dedication and hard work from all, including the actors. Dan Stevens didn’t take it lightly thinking that CGI is there to cover up. He had to put in even more effort to look the character. All the glamour and glitz of the entertainment industry makes us think that the actors say their line in front of the camera and they are done. They don’t work hard enough and even then they are getting paid a helluva lot of money. But, now time and again we come across stories about how the actors have worked their ass off to get into the skin of the character, only then we have started believing that they are actually paid what they deserve. It’s not an easy job and not everybody is cut out for this. Will any Tom, Dick, and Harry be able to pull off a role like this? Will you be able to able play a character that doesn't have anything to do with you in real life and make people fall for that character? The answer is NO. We all know it’s their job, but when someone is doing their job so finely and accurately, then they should be applauded and encouraged so that they can keep on giving such stellar performances. Finally, Hermoine Granger is out of Emma Watson’s life and Belle has stepped in quietly. It is nothing like Emma Watson has ever complained about the role of Hermoine that has given her all the popularity and fame she could ever dream of. But, an actor always thrives to perform better than what they did in the previous film. This film has given Emma Watson enough reason to cheer about. Emma Watson is now “Belle’ and not that character from the Harry Potter series, moreover, her role is being immensely appreciated by the critics and the audience. 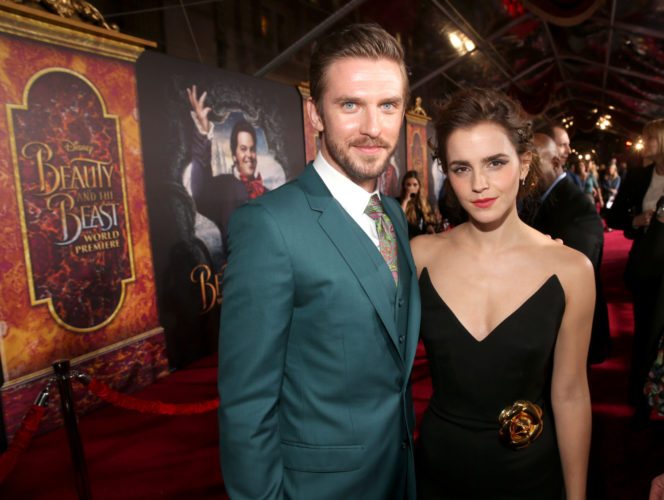 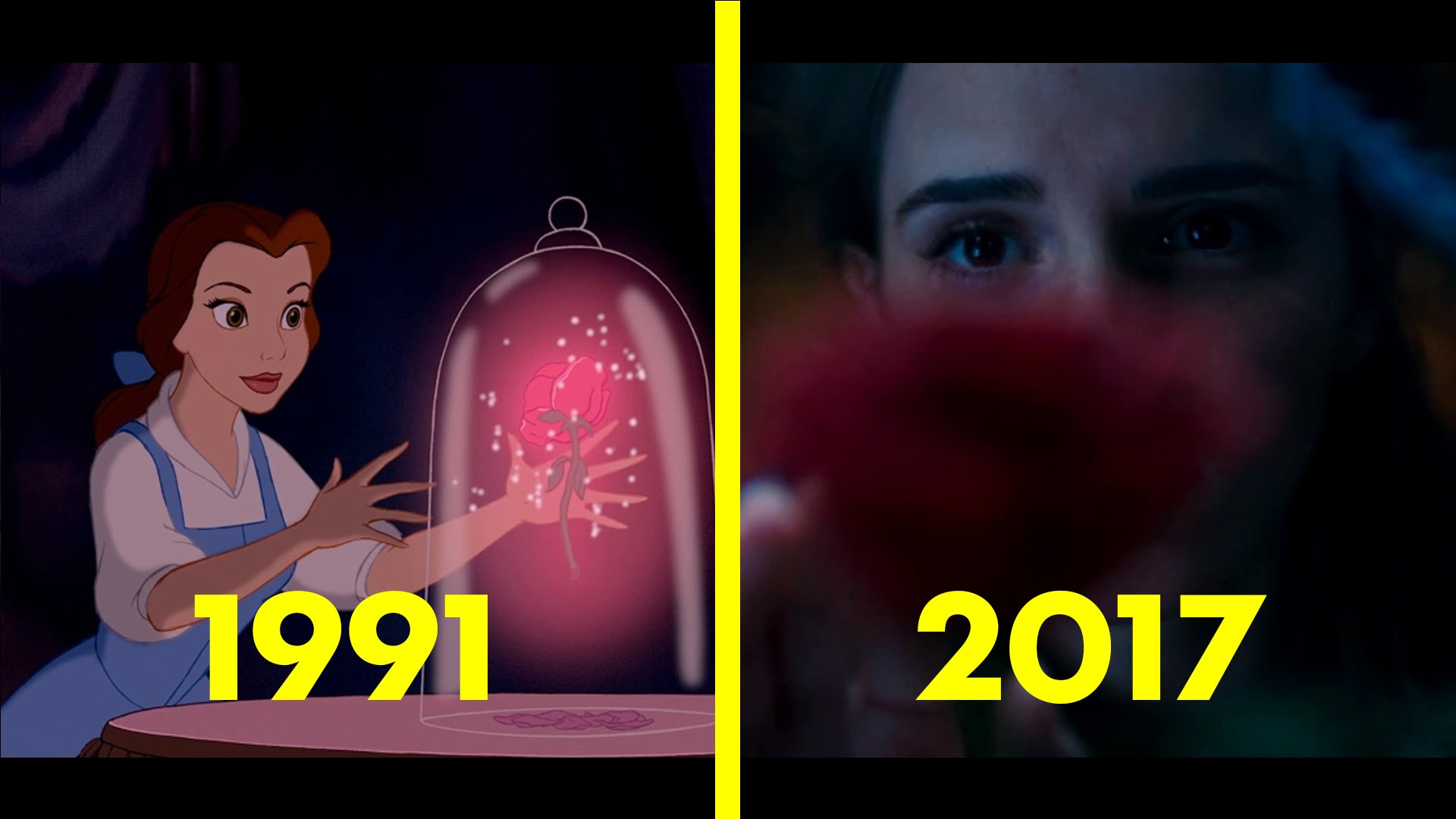 Both the actors, Dan Stevens and Emma Watson were aware of the immense pressure of living up to the expectation because the animated version of the story was already popular and deeply etched in everybody’s memory till date. When someone is trying to get into the shoes of something that is already established and popular, then it is very difficult to handle the pressure of the expectations. They themselves have watched the animated version and were a fan of that. So, now when they were a part of the same movie, they knew that they had to put in their best foot forward. There is no other way out of that. They both have done career-defining roles previously and they both wanted to break free of their previous images. So, it seems that Dan Stevens and Emma Watson were the perfect choices for the roles. After taking a break from the role of Hermoine that Emma Watson was playing for the last 12 years, she was happy to lead a normal life when she got a call from the co-screenwriter of this film, Stephen Chbosky asking Emma Watson for a singing audition tape to see whether Emma watson would fit the bill of ‘Belle’. Even for Dan Stevens, things were difficult because of the suit and all which was prepared to track every single movement of his so that it can be digitally altered later during the post-production and turn him into the beast that we see on screen. The hard work has really paid off and now Emma Watson and Dan Stevens are almost immortalized as Belle and the Beast.