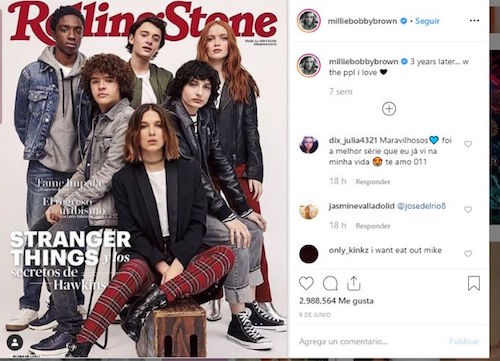 Ever since the Netflix series, Stranger Things made its debut in 2016, people have been obsessed with it. Are you a fan? Are you a Stranger Things' binge-watcher? One of the reasons the show has been so successful (and why people are obsessed) is the talented young cast members. People love keeping up with them, how they interact with each other, the cute friendships, all their social media post... they're pretty cool, right? Where you that cool at that age?

it's been 3 seasons so far, and they've grown up in front of the audience, and the transformations are quite something. They are not the cute kids you met on season 1, they have become some pretty cool teenagers with their own vibe and they are just beginning. One of those rising stars is Millie Bobby Brown, aka Eleven of Stranger Things. She went from being a very cute 12 years old (when she started the show) to one of Hollywood's most fashionable teenagers. Her path to get where she is now was not always easy and at so young an age she has learned that to be successful in this business she has to be a hustler.

Since she made her debut on the show, 3 years ago, fans have been crazy about her because she has been endearing their hearts with her performance in the show and with her personality, and she's just 15 years old! Her path has just started and people are eager to know every little detail about her short life and career. Want to know some interesting and cute facts about the beloved Eleven? Keep reading about Millie Bobby Brown

1. Orignally, her character Eleven was not going to survive season 1 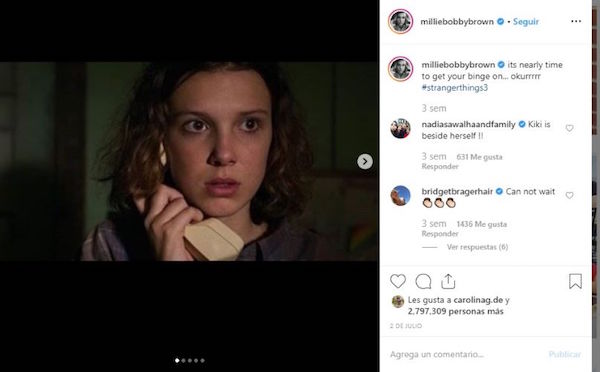 Millie Bobby Brown reached start status thanks to her role in the Netflix hit, Stranger Things where she plays Eleven, the psychokinetic girl who escapes from a sketchy laboratory and ends up with a group of misfit boys looking for their lost friend. Her character Eleven wasn't supposed to survived season 1, for the fans that's easy to forget because thanks to them and Brown's performance, she not just survived season 1, Eleven now's the star of the show.

The Duffers brothers have opened up recently (in the newly-released companion book, Stranger Things: Worlds Turned Upside Down) that their original plans for the series regarding two of its main characters where not as they are now, they weren't going to make it to season 2. Eleven was going to sacrifice herself during the pivotal showdown with the Demogorgon.

2. She has an interesting backgroung

She was born In Spain on February 19, 2004, at just 15  years old she's already an icon because of her role in Stranger Things. Although she was born in Marbella, Spain, she's British. Her parents (Kelly and Robert Brown), who are British, moved the family back to England when Millie was 4 years old. They resided in Bournemouth for four years. When Millie was 8, they emigrated to Orlando, Florida.

While in Florida, Millie enrolled in acting classes (so, she'll have something to do on Saturdays), and that was when a Hollywood talent scout spotted her and was immediately impressed by her natural acting abilities. That's when her parents decided to sell everything so the whole family could relocate to Los Angeles so Millie can pursue her acting career. She had such talent that she was offered representation by almost every agent that met with her.

Millie is partially deaf in one ear (she was born like that), so on set the director has to say "action" very loudly for her to hear or hold a sign that she could see.

3. Her family sacrificed a lot for her career 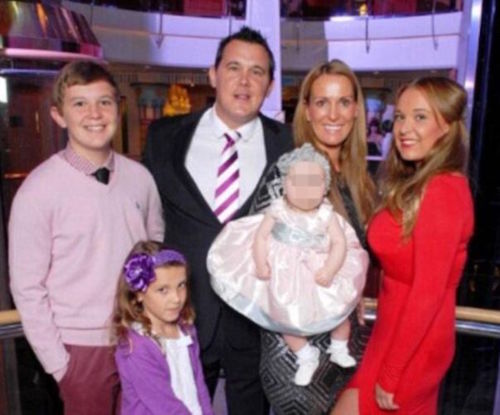 Trying to launch Millies' career, her family moved back and forth between the US and the UK for some years, but that was happening as fast as they would like. She was getting parts in hit series like NCIS (she played Rachel Barnes in a season 12 episode), Modern Family (she played Lizzie in a season 6 episode), and Grey's Anatomy (she played Ruby in an episode of season 11), she was also in two episodes of ABC's Once Upon a Time In Wonderland (she played a young Alice) but she wasn't getting any starring roles, so things started to get tight for the family. At one point, they were so broke that they had to borrow money from Millies' manager (Melanie Greene) so they could survive.

Things got so tough that her old sister decided to leave the US, Millie has said that those were hard times for the whole family. In the summer of 2015, the family admitted defeat (they had run out of money) and went back to the UK, to live with an aunt. Millie has said in various interviews that she felt devasted because she wasn't getting any work, that she thought she was done. Her big opportunity finally arrived, when back in England, she auditioned for Stranger Things and in less than two weeks the whole family was flying back to the US so Millie could begin the filming of the Netflix hit.

4. She does more than acting 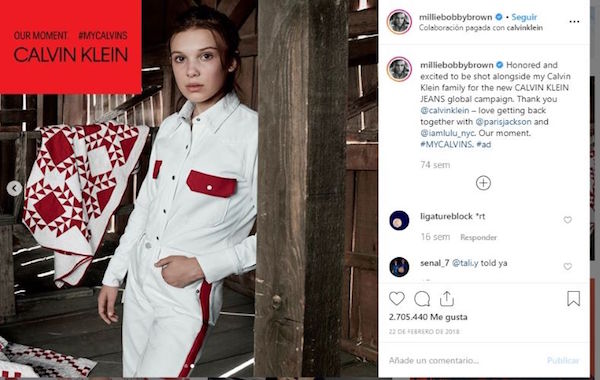 Back in 2016, when Stranger Things started, Millie became one of the most in-demand faces so she featured in the video of fellow British singer Birdy for the song Find Me. In the video, she mimes along to the lyrics while walking through  LA.

At the beginning of 2017, Millie signed with IMG models (an international professional model agency) to become the new face of Calvin Klein for the Appointment campaign  From there she has appeared on the cover of prestigious magazines like Vogue, Elle, Dazed and Interview.

Millie has also shown us that she can rap. When she was invited to The Tonight Show with Jimmy Fallon, she performed a rap song where she did a recap of the first season of Stranger Things. She ended that performance with a mic drop. Pretty cool, uh? 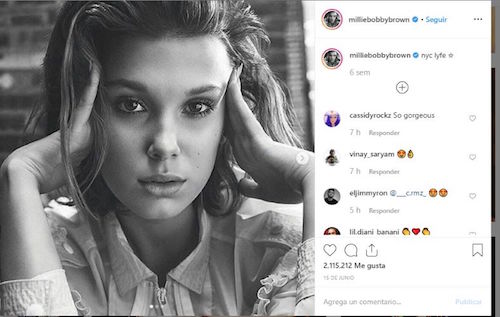 Millie's been acting since a very young age, for now, she has been doing three seasons of Stanger Things, she's become a brand ambassador and she has landed starring roles in movies. These jobs are big-time lucrative. Let's break it down, first Stranger Things, how much are they paying not just Millie but the whole cast of kids? Well, during the first two seasons of the show each one of them made around $30,000 per episode. In season 1 there were 8 episodes and in season 2 there were 9, so if we do the math, Millie earned $510,000. Not bad, right?

Turns out, the whole cast renegotiated and, for season 3, the producers of Stranger Things agreed to pay them $250,000 per episode, so for this 8 episode season Millie made a cool $2 million. That's just Stranger Things but remember that she's a professional model with Calvin Klein's by"Appointment" campaign and for Moncler's summer campaign, her earnings there are not disclosed but you can imagine that those paychecks are no joke.

She's also a movie star now, what with her debut at the blockbuster film Godzilla: King of the Monsters in 2019. For this role, she earned $1,000,000 plus a cut of the back end. And if that wasn't enough, she's also chasing checks for gaming. In 2018 she announced a collaboration with EA games on The Sims 4. So her total Networth, according to Celebrity Net Worth is $4,000,000. For a teenager that's not bad at all, right? 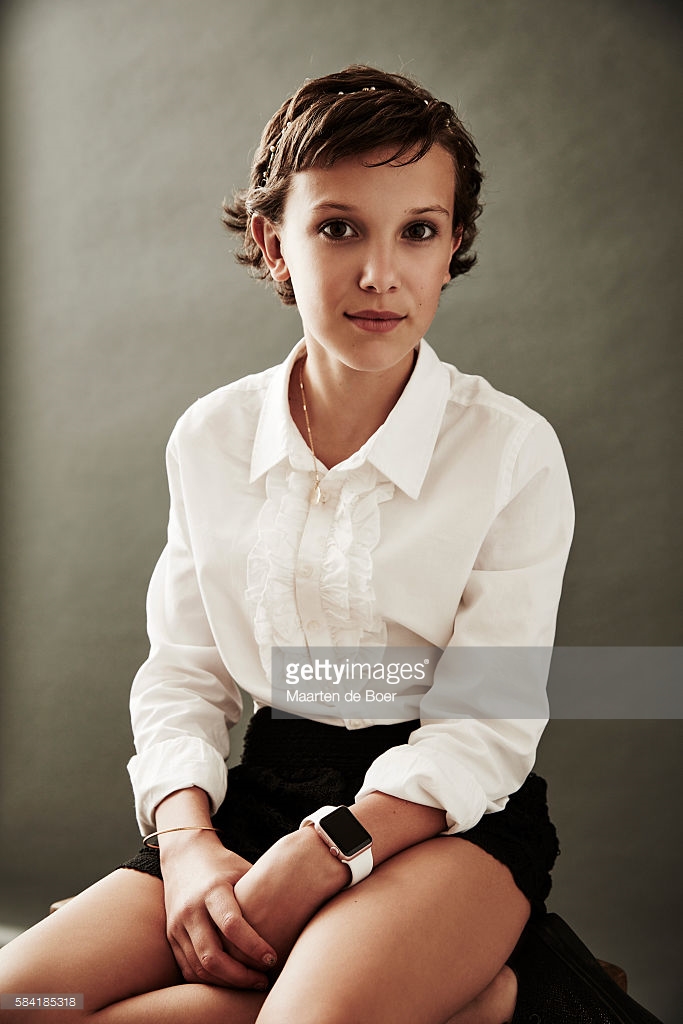 Millie Bobby Brown has taken the world by storm. Learn here about her parents, Kelly Brown and Robert Brown. They are her biggest fans! 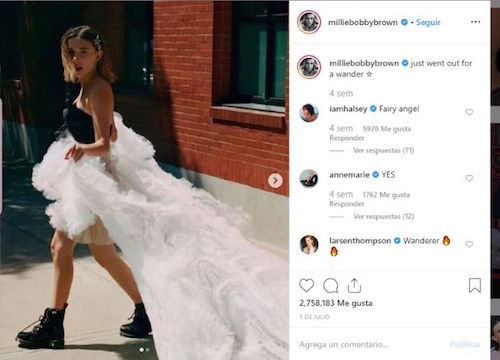 Millie Bobby Brown is now not just a beloved actress in a series that smashed the rating records with season 3. Netflix reported that over 18 million (45%) of the households streaming Stranger Things completed the eight-episode season in just four days. She's also a fashion icon that's just beginning her journey. There's much to come for her, but right now, she's living a remarkable life for a teen in Hollywood and the whole showbiz. If you want to keep up with her, her career and some very cute posts, follow her on Instagram