David E. Kelley came into the world on April 4, 1956 in a small town called Waterville, located in the Southern Coast portion of the state. Kelley did not start out in life with his eyes towards Hollywood. He went to Princeton University, majoring in Politics and graduated in 1979. From there, he continued on the educational path, going to Boston University's prestigious law school. He became a graduate from B.U. Law in 1983, receiving his J.D. (Juris Doctor - Law Degree). This was the the same time period he began work on his first film, a movie called From the Hip in which he began his career working on productions that drew on his legal education. He would go on to say later in his life that his work reflected his life experiences and knowledge.

The way I personally work is I like to write what I know, what I feel, and also where I am.

From the Hip came out four years after he graduated with his law degree in 1987, and while it wasn't a flop, it was far from a hit. It did however catch the attention of the man who would give Kelley his first television job, Steven Bochco. The script would get Kelley a meeting with the man who would become not only but his mentor, but one day partner in founding his own production company. Bochco decided to hire Kelley onto the first season of his new show, LA Law. He felt that Kelley's education and knowledge combined with his cutting edge writing would be a hit with the hipper then usual late 1980s television audiences. Kelley was hired on in 1986, and by the time he became the prestigious show runner 3 years later in 1989, he had quit practicing law and moved to LA LA Land. This was the year he would gain his first credit as a co-creator with Bochco on the much beloved and long running Doogie Howser, M.D. With these successes under his belt, Kelley had earned enough confidence and experience to leave LA Law in 1991 and get his own show, Picket Fences, under way. This was where audiences truly would begin to see Kelley's knack for creating some of the quirkiest and oddest characters in television history. 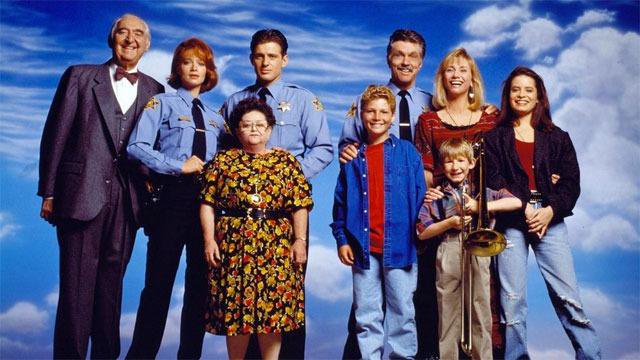 Shows, Awards, and Love - Kelley finds it all

Though now few people, audiences and Hollywood insiders alike, doubt Kelley's abilities, there were many doubters in 1992 when Picket Fences hit the small screen. Kelley had to fight with CBS over his casting choices for the main couple of the show - Tom Skerritt as Sherriff Jimmy Brock and Kathy Baker as his second wife Dr. Jill Brock. CBS was unsure of the choice of these two as series leads, but Kelley stuck to his guns and CBS got on board - especially when they both won an Emmy for their performances in the first year. Over its 4 year, 88 episode run, the show was a popular hit, critically liked and a huge player in the awards game. It was just beginning for Kelley, who would come out with another hit in Chicago Hope in 1994. He was still young and a little inexperienced however, and after a year at the hilt of 2 shows he had to step down from not only one, but both of them in 1995. His break would not last long however. As Picket Fences exited the airwaves in 1996, Kelley introduced viewers to a law firm in Boston that would be home to some of the strangest and most controversial characters in legal television history, led by the titular character - Ally McBeal. The comedic and often strance Ally McBeal was a show that focused on the wacky characters who all happened to work together as lawyers at a high priced firm, and not as much on the legal aspect of it. At the same time, Kelley had The Practice going - also a legal show, but a drama instead of a comedy. The Practice was as grounded and intense as Ally McBeal was off the wall and light. The two shows also dueled in the minds of the public. Many people were not happy with the way women were portrayed on Ally McBeal, especially since Ally herself seemed to be all things that the strongly galvanized feminist movement was against in the early 1990's. Any who said that Kelley may not be able to write good female characters pointed to this particular show. They had a difficult time doing so by his defenders, since at the same time over on The Practice, he had created some of the most grounded and intelligent not only male but female characters to ever grace the television screen. In Camryn Manheim's Ellenor Frutt, we saw not only an intelligent woman who could hold her own against any man, but she broke through to many for not being a typical Hollywood size zero lead actress. The two shows not only appealed to different audiences, but being in two different genres they both got to be leaders in their respective categories, garnering many wins for writers, directors, and cast members over their runs. 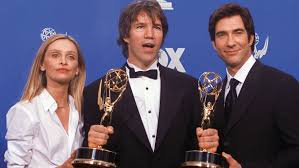 2 award winning shows on at once

Thanks to the 90's, as the new millennium dawned, Kelley was seen as the undisputed, unchallenged King of Television. Though he ventured into other genres, from medical to public schools, Kelley always returned to the legal field for new show ideas. In 2004, he went back to his Boston roots, and came up with a spin-off to The Practice called Boston Legal. Alan Shore, played by James Spader, was an attorney from The Practice who struggled with many ethical issues both personally and professionally. In Boston Legal, Kelley was able to merge both genres together for a more balanced dramedy, that took the seriousness of The Practice and the comedy of Ally McBeal into a much better formula to balance out for the audience. He found continued success, and continued his forays into many different genres. He has remained relevent and shown his ability to stay at the forefront of his art up to today, when he has come out with his first streaming show in Goliath - a return to the legal dramedy, and an HBO hit mini series in the well received and highly acclaimed Big Little Lies. This is a show based on a hit book by Liane Moriarity. It is about mothers whose lives aren't as picturesque as they may initially seem - a dark comedy that features strong woman characters, and has some of the best actresses in Hollywood associated with it. David E Kelley has been a leader in television for 3 decades, and shows no sign of slowing down. 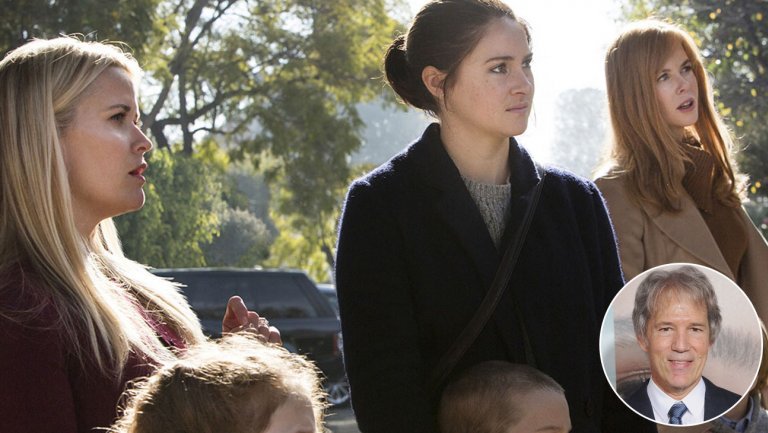 The latest in a long career of award winning shows

Being Michelle Pfeiffer and David E Kelley - husband and wife 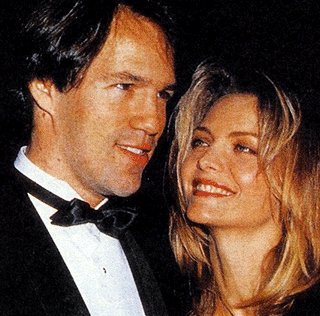 With all of Kelley's 1990's successes, none has been more continuous or fulfilling as his 1993 meeting and marriage to Michelle Pfeiffer. Kelley and Pfeiffer were set up in January of that year on a blind date, and were married in November of the same year. In the world of Hollywood where the lists of short marriages out numbers the lists of long-term couples, these two superstars rushed to the top of the power couples and never relented. Not only do Kelley and Pfeiffer have longevity that is not commonplace not only in Hollywood, but in America, they also have managed to balance public life, private life, parenthood and successful separate careers with grace and class. Pfeiffer's name, much like her husband's, has become synonymous with high quality productions. Michelle Pfeiffer's name has been out of the spotlight for awhile however, as she was so choosy with her roles she became branded as "difficult" which in Hollywood, makes one not hireable. Pfeiffer is bursting, back onto the scene in a big way in 2017 however. Pfeiffer is going to be coming back to both the big screen and the small screen. She will be on the small screen with HBO, though not in Kelley's hit series, Big Little Lies. Pfeiffer will be appearing in HBO's movie The Wizard of Lies. On the big screen, audiences will get to see Michelle Pfeiffer in the credits again at the end of her 2 releases slated for this year - Darren Aronofsky's Mother! staring Pfeiffer and Jennifer Lawrence, as well as the newest production of Agatha Christie's famed Murder on the Orient Express, under the direction of Kenneth Branagh, starring Michelle Pfeiffer and Johnny Depp. Over the years, David E Kelley and Michelle Pfeiffer have accumulated countless awards between the 2 of them (Kelley for writing/producing and Pfeiffer for acting), and have grossed net worth's that point to how talent in Hollywood can bring you monetary success. David E Kelley has a reported net worth of $250 million dollars himself, and Michelle Pfeiffer also has a high net worth of her own at an estimated $80 million, making this couple worth approximately $330 million dollars together. Not bad for a kid from Maine who seems to have fallen into this career.

I never thought of myself as a writer. 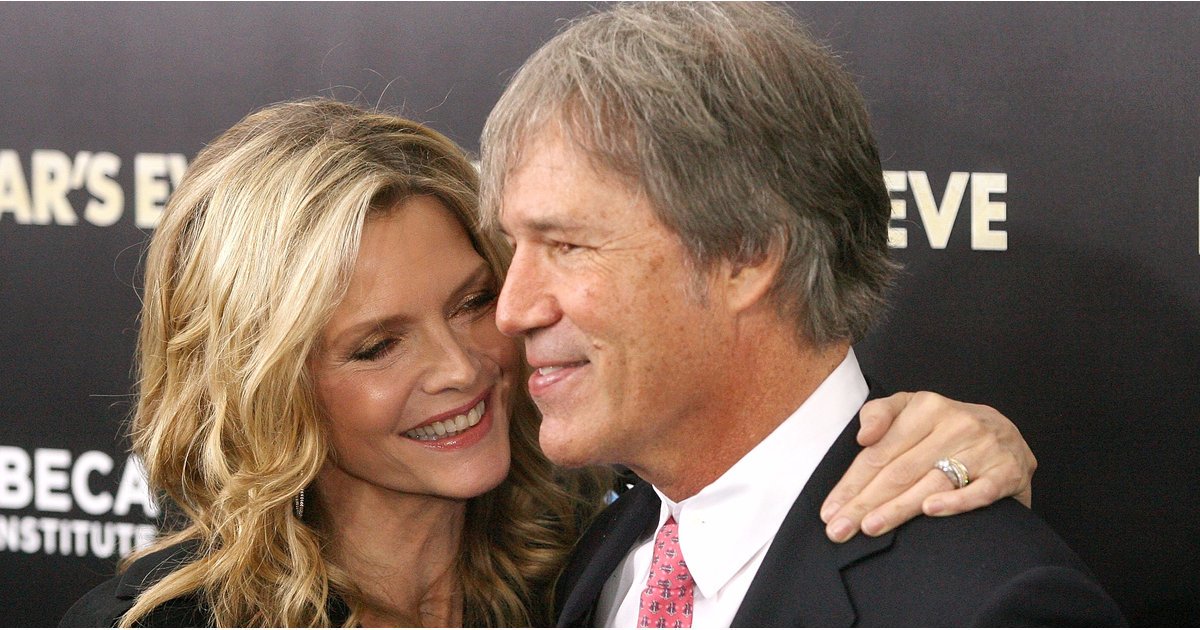 Long term love in Hollywood may contribute to aging gracefully and being continuously successful in the limelight.