dancing in the dark, with you between my arms

Corey Haim was a Canadian actor, known for his movie career throughout the 1980's. Once regarded as one of Hollywood's biggest teen heartthrobs, Haim fell victim to drug addiction and died of pneumonia in 2010 at the age of 38. Experiencing fame and fortune so early in his life took a toll on the young actor, and would ultimately lead to his demise. He could never repeat his success as a teen actor in the 80's, no matter how hard he tried. His expensive drug habit took over, making him incredibly unreliable on set and incapable of landing the roles he could have done in his youth. Haim had a net worth of only five thousand dollars at the time of his death.

A true example of natural talent, acting was a life Haim sort of fell into. His mom enrolled him in mime and improv classes at a drama school in Toronto, with hopes of the classes helping him overcome his shyness. He wasn't all that interested in acting in general, but attending auditions alongside his older sister Carol helped him break into the film industry. Haim was ten years old when he landed his first role as Larry on a Canadian children's program "The Edison Twins". "The Edison Twins" was an educational television program, where a pair of twins used scientific principles to solve the problem presented in each episode. Haim appeared in over twenty episodes of the show in the early 80's. He went on to appear in multiple movies after his work on the television program. His first film was 1984's "Firstborn", a drama about a single mother who brings her violent alcoholic boyfriend into the lives of her sons. He'd go on to play supporting roles in numerous films afterward, starred alongside big name actors like Sally Field, Gary Busey, and James Garner before even hitting his teen years.

His initials were C.H. also.. just sayin. Anyone else in the world seen "Prayer of the Rollerboys"? About post apocalyptic LA run by a gang of rollerbladers that wore white trench coats and sold acid out of old ice cream trucks. I've been trying to be Corey Haim ever since. 💙 #coreyhaim #thetwocoreys

Haim already had a steady stream of films under his belt, but it was 1986's "Lucas" that really helped him gain recognition within the industry. A coming of age story about a young intelligent boy who fell for a cheerleader, Haim played the titular character in the comedy. The film also starred Charlie Sheen, Winona Ryder, and Kerri Green, the cheerleader Haim's character fell for. Life imitated art in the form of Haim actually falling for Green off screen, making his performance in the role that much more real for the young actor. Haim was praised for his performance, receiving a Young Artist Award nomination and accolades for his ability to bring the character to life in such a believable way. He was thought of as a true talent, and as someone with so much potential, he could've become a well-respected actor rather than an almost forgotten child star. Sadly his drug abuse and early death got in the way.

Should I post an Ooc pic?🤔 and I'm extremely happy cuz I just found a whole bunch of great Corey pics:)

When Haim paired up with fellow 80's heartthrob Corey Feldman in the horror comedy "The Lost Boys" a brand new era was born. Appropriately named The Two Coreys, Haim and Feldman became fast friends while filming the movie, and went on to create a phenomenon. The older cast members stuck together, leaving Haim and Feldman out of their nightly parties, which gave the two young stars the opportunity to bond with one another. Haim and Feldman spent the hours they weren't working together, visiting the local arcade and staying in their hotel to watch movies. Their off-screen friendship led to an on-screen partnership, and together their teen stardom rose to levels neither of them could've predicted. Haim and Feldman would appear in nine movies together throughout the 80's and into the 90's. In addition to "The Lost Boys", they found major success with their work together in "License to Drive" and "Dream A Little Dream."

Unfortunately for Haim, with fame and fortune came a dangerous side to Hollywood. Living in Los Angeles with drugs at his fingertips, Haim couldn't deny temptation. He began drinking alcohol on the set of "Lucas", tried marijuana for the first time while shooting "The Lost Boys", and by the time he was making "License to Drive", he was already at a breaking point. First came cocaine, which led to crack, and by 1989 Haim was undergoing his first rehab treatment, in hopes of breaking the habit for good. After he was out of rehab, Haim released a self-promotional movie "Corey Haim: Me Myself And I". The film followed a day in his life, and while Haim tried to convince audiences he was clean, it was clear he was under the influence during filming. "Me Myself And I" didn't do much to recover his image as a wholesome teen heartthrob. His fans were wondering what happened to the Corey Haim they knew and loved, and those closest to him became increasingly worried about the road he was going down. His addiction to drugs hit an all-time high in the 90's. He became unable to perform at work and when he could his performances suffered greatly. His adoring fans started to turn against him, making him completely lose the audience that helped him rise to fame. He was in and out of emergency rooms, abusing prescription drugs, and his addiction led to him burning just about every bridge he'd made in his career. In 1996 it got so bad that even Feldman was forced to fire Haim from a film the two were working on together. Haim refused to deal with his drug problem, having fallen back into denial, and was too unpredictable on set for Feldman to allow him to continue working on the project. The following year Haim was forced to file for bankruptcy. It was well known within the industry that he had become impossible to work with and was fighting an addiction. Job offers were no longer coming in, and even the straight to video opportunities he had through the late 90's were gone. His Hollywood star had blown out, and he was no longer the remarkable talent he used to be. In the midst of his struggle with drug abuse, Haim dated high profile celebrities including Nicole Eggert and Victoria Beckham. Eggert spent lots of time in emergency rooms alongside Haim and is thought to have saved his life on multiple occasions. According to Victoria Beckham, their relationship was short-lived, and she never had to accompany him to the hospital.

coreyography is probably one of the best biographies I have ever read. I just wanted to have a post dedicated to one of my idols Corey Feldman. I honestly love him so much. Him and his movies have influenced me so much. Thank you Corey. You will probably not see this but I just wanted to tell you, you are a beautiful human being and I love you. @cdogg22 #coreyfeldman #coreyhaim #thetwocoreys #coreyography #80s

After years of being off the Hollywood radar and a failure to re-launch his career, Haim finally found the answer with long time best friend Feldman. In 2007 the two reunited on screen to star in their own reality show: "The Two Coreys". The series was partially scripted but showed the honest struggle Haim went through to try and get back on top in the entertainment world. He'd all but disappeared from the limelight once the 2000's rolled around, but he was determined to get his career back. It seemed like he had conquered his addiction after years of fighting and was slowly but surely becoming his old self again. Haim was serious about getting better and getting his life back. It didn't last long though, and the demons he faced when he was younger began rearing their ugly heads once more. In the second season of "The Two Coreys" it appeared that Haim had begun using again, and after a failed intervention by Feldman and some other close friends, Feldman broke ties with Haim so he wouldn't have to watch him destroy himself. Haim was circling the drain, having only appeared in a couple forgettable movies since his return, and wound up homeless on the street. He was incredibly embarrassed by the situation he put himself in and while it seemed like the wake-up call he needed, he simply wasn't strong enough to pull himself back up.

Haim never truly beat his demons and they won in the end. He was 38 when he died, although he did appear to be fighting as hard as he could to get better. Haim had patched things back up with Feldman before his death, and the two even began working on a new idea for a movie together. Feldman said Haim was in the best frame of mind he'd seen him in during their last moments together. Prescription drugs were too strong for him to resist. He'd been visiting different doctors and pharmacies leading up until his death, acquiring as many drugs as he could. He was clean when he died, having been so for a couple weeks, but his long history of addiction took a toll on his body, and he was clearly still tempted enough to seek them out, even if he wasn't actively using at the time. Haim's funeral was held on March 16th, six days after his death, at Steeles Memorial Chapel in Toronto. Haim's mother asked Feldman not to attend the funeral, in fear of the event being publicized. 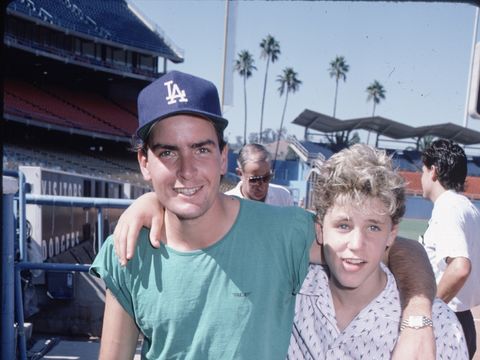 Recently some upsetting news has come to light about Haim's experience on the set of "Lucas". His then co-star Charlie Sheen has been accused of raping him while on set, when Haim was merely 13 years old. The alleged rape happened during a lunch break during filming; in a secluded spot between their two trailers, where Sheen took advantage of Haim. While Charlie Sheen vehemently denies the rape, Feldman recounts a story Haim shared with him about the incident in question in his memoir. Feldman explains that Haim told him what happened to him on set and that he was led to believe it was something all young actors in Hollywood did with older men. Haim was too naive to see the act as rape. Feldman calls Haim ambitious and innocent, which is what led to him being taken advantage of sexually. Feldman never mentions Sheen by name in regards to the rape, but does say that it happened on the set of "Lucas", it was with an adult male who convinced Haim it was perfectly normal, and Feldman has been quoted before as not being a fan of Sheen because of things he's done to people he knew. According to Feldman, it was the weight of these demons that led to Haim's death; something he'd fought his entire life to recover from.

Corey Haim was one of the greatest talents of his time, and was taken from the world much sooner than he should've been. A history of drug use, sexual abuse, and the negative side effects of the Hollywood lifestyle are to blame for Haim's untimely death. Rest in peace, Corey.