More on the pro golfer's ex-wife, her divorce, and life right now

Arguably one of the most successful golfers of all time, Tiger Woods, is a name that correlates to golf. And with someone as prominent as Woods, his close relationships have frequently made headlines.

Take Woods' ex-wife, Elin Nordegren, for example. Not only is she a woman worth looking up to for the sacrifices she has made for their family, but her successes are also worth a hats-off with respect. Do read on if you're interested in getting to know all there is to know about Woods and Nordegren.

Tiger Woods in a Nutshell

He has won the Masters Tournament five times, the US Open three times, the PGA Championships four times, and the British Open three times – it goes to show that Tiger Woods is indeed a highly-successful golfer. He is also the PGA career money list leader and has pocketed 82 PGA Tour wins – the same as Sam Snead for the most all-time career victories.

Eldrick Tont Woods was born in Cypress, California, on December 30, 1975. His first name is a mix of his father and mother's first initials. His father was named Earl Woods, while his mother is named Kultilda (Punsawad) Woods. Tony is a traditional Thai name, presumably given by his mother, who is Thai. Earl, who served in the army, was of African-American descent.

His father gave the nickname "Tiger" after a fellow soldier-friend Col. Vuong Dang Phong, who had fought alongside Earl during the Vietnam War. 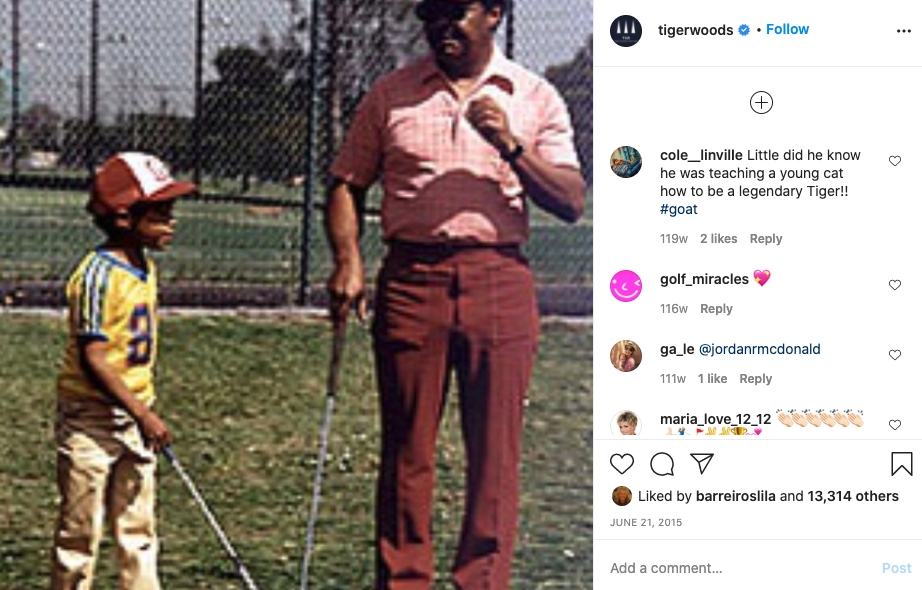 Now, for Tiger's golf beginnings. One could literally say he was born into the sport as his father also played golf. Tiger would watch his father swing at golf balls in their garage when he was only six months old. At the age of 2, he won a putting contest with Bob Hope. A year later, he shot 48 for nine holes. Yes, that's about the same time other kids were learning how to hold pencils properly.

When he was 8, he first broke 80 then broke 70 when he was 12. Tiger is also the only man able to win the US Amateur Championship for three consecutive years from 1994-1996. The sky was the limit to Tiger's golfing career. When he was 24 years old, he became the youngest golfer in history to win the career grand slam. 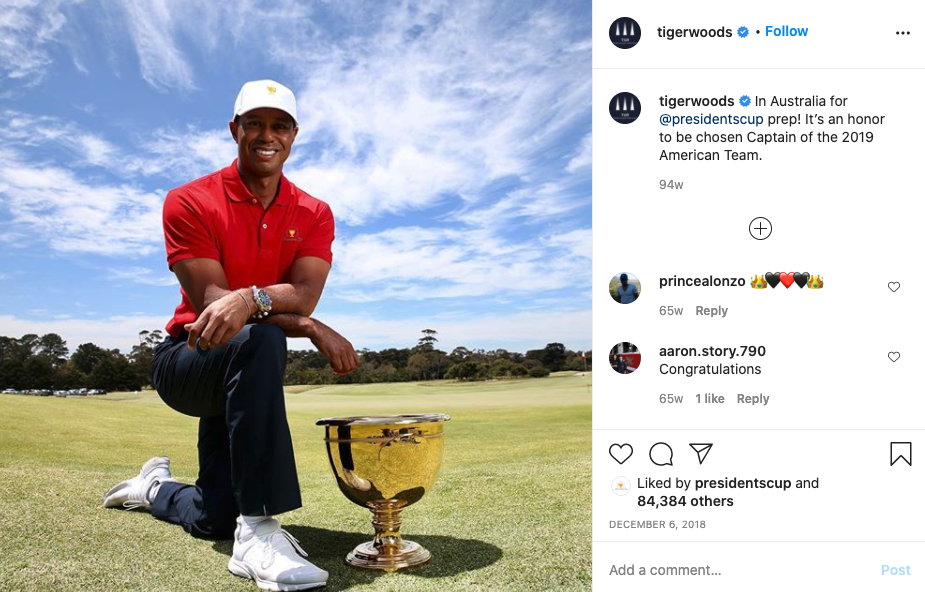 As a sportsman, Tiger also enjoys all sports, including soccer, basketball, and diving. With all of his accolades, Woods has also amassed his riches. He has a net worth of about $640 million, coming in second to Oprah Winfrey as the richest "African-American."

Not letting his knowledge for golf remain a secret, Woods wrote a book in 2011 called "How I Play Golf." It is the best-selling golf instruction book in the market, with over 1.5 million copies sold. 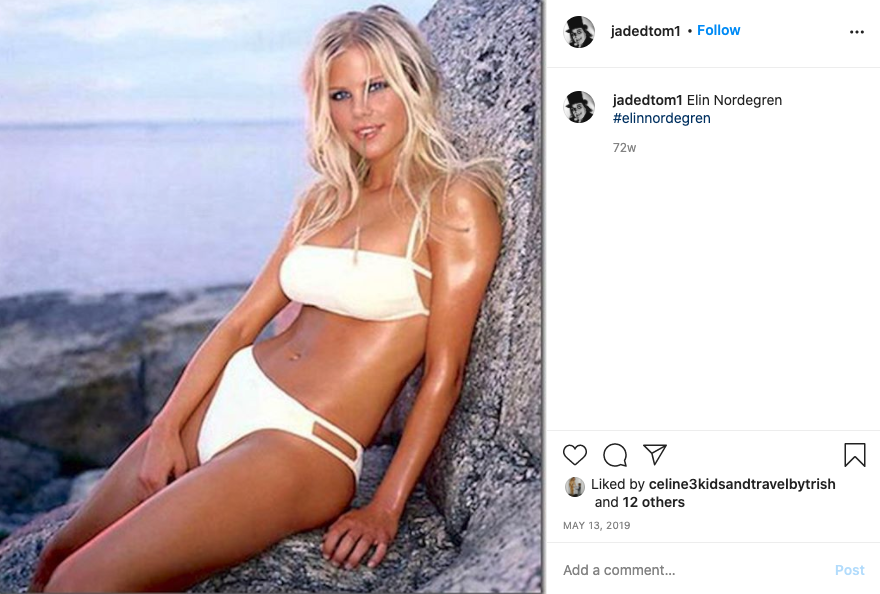 First, let's talk about Elin Nordegren, born in Stockholm, Sweden, in 1980. She is what you call a woman of brain and beauty as she made sure to maintain academic excellence in school and was on the soccer team at the same time. She was discovered by a famous photographer, Bingo Rimer, who boosted Nordegren's modeling career. Beauty and brains, indeed.

Meanwhile, Nordegren didn't feel like modeling was fulfilling her life's purpose, so she deviated from this path to pursue child psychology. While trying to balance a part-time job and her studies, she was offered a job in the United States as a nanny for the children of Swedish golfer Jesper Parnevik. Little did she know this decision would change her life forever.

How Elin and Tiger Woods Met

With that, Nordegren left her homeland, her studies, and job, as well as her boyfriend, for a new beginning in the US. Woods was already a prominent golfer when they met on a PGA tour in 2001. "I had my opinion about celebrities," said Nordegren, who was initially wary of becoming involved with Woods.

When she discovered they had a lot in common, they eventually dated for two years before getting engaged. The two did not hold anything back for their wedding, which spanned over a week in Barbados. In fact, the entire Sandy Lane Resort hotel was booked solely for Tiger's family and friends. The booking alone cost him $2 million. Nordegren has been quoted saying her 2004 marriage to Woods was one of the happiest days in her life.

It was soon after their extravagant wedding that the newlyweds enjoyed the peak of Wood's career. They purchased several homes in celebration, such as a waterfront mansion, a house in Sweden, and a couple more in California and Wyoming.

In 2007, they welcomed their first child, Sam Alexis Woods. The growing family couldn't have been happier and felt like they were in a bubble of bliss. Two years later, they had Charlie Axel Woods. Their daughter and son have even followed in their dad's footsteps and pursue playing golf.

Unfortunately, the bubble of bliss burst on Thanksgiving Day 2009 when Nordegren came across an online article alleging an affair between Woods and Rachel Uchitel during a New York trip. Uchitel is an American nightclub manager and hostess. Nordegren tried to confront Woods about the article, and he denied the allegations.

Not letting go of her suspicions, Nordegren searched her husband's phone for any confirmation and found the evidence she needed, which proved the affair was real.

Soon after the confrontation, Woods decided to take a break from his career to focus on himself. He announced via his website that he was taking an "indefinite break from professional golf." He was the number 1 draw, and number 1 driver of ratings for TV sponsors, yet this did not deter Woods from taking time off to get back on track.

When Uchitel decided to speak up about the affair with media, things escalated downhill for the couple. Woods even tried paying Uchitel $10,000 to remain silent, thus canceling her scheduled appearance. However, the news opened a can of worms, and more women began coming forward to admit they too had been involved with Woods at one point or another. 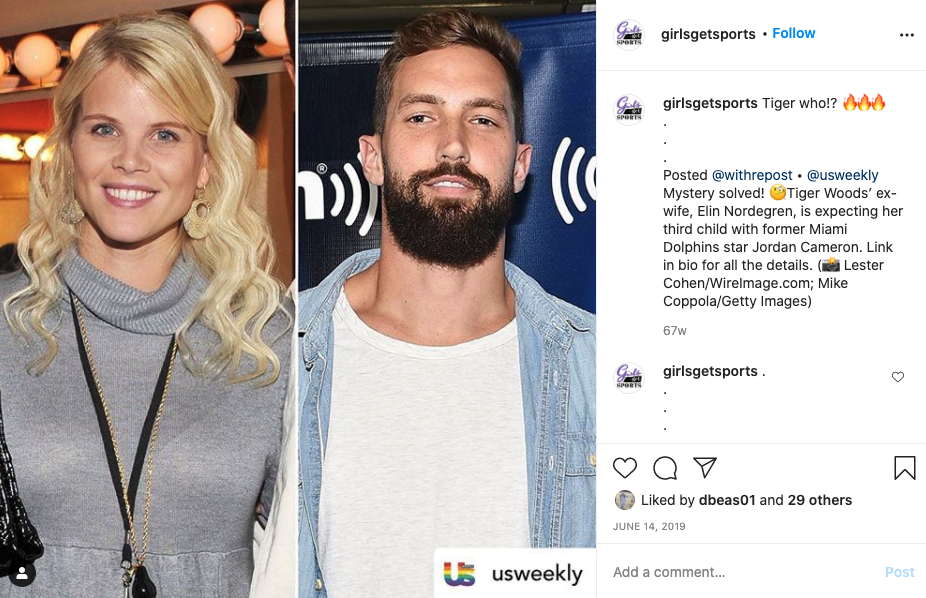 As more and more stories of Woods' infidelity came rushing to the surface, Nordegren decided to stay as low-profile as possible while she endured the painful ordeal. Her twin sister, Josefina, was the rock which stood by Nordegren during the stormy weather. Josefina worked at a legal office in London. This proved beneficial for Nordegren when the affairs were discovered.

Josefina helped her sister throughout the emotional and legal stages of the divorce. Josefina's office provided Nordegren's legal team. While the prenup agreement Nordegren and Woods had during their wedding was $20 million in case of a divorce, the gravity of the situation led to a $100 million settlement.

It was assumed and widely accepted that the additional $80 million was a minute way of compensating Nordegren for everything Woods had put her through. Despite all the pain and hardships, Nordegren did not deny Woods partial custody of their children and wanted him to be a part of their lives. She did not ignore the fact that he was the father of their children. 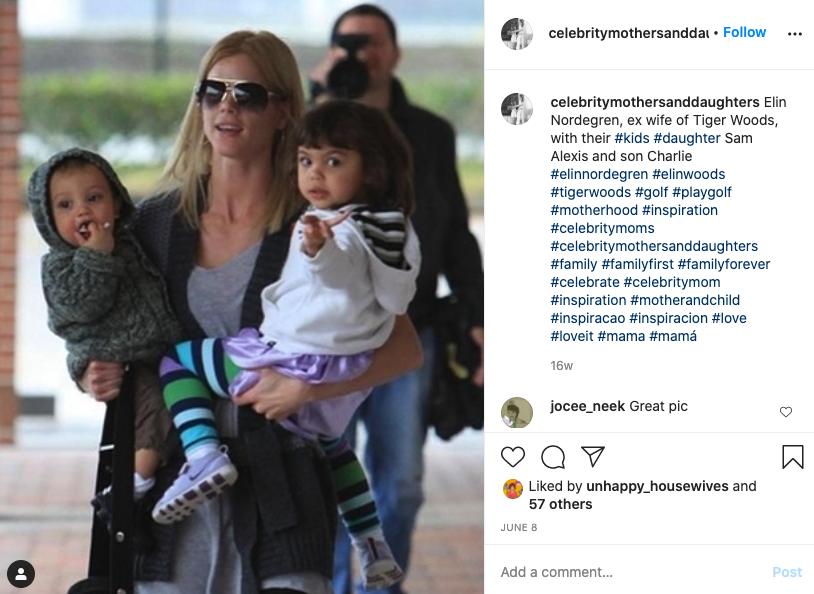 As Woods began dating other women such as Erica Herman, Nordegren also moved into a new relationship when she met billionaire mining entrepreneur Chris Cline. They dated on and off until 2016. He was 53 years old and 20 years of Nordegren's senior.

About a decade after the divorce, in 2019, Nordegren was spotted with former NFL player Jordan Cameron. Shortly after, she confirmed her pregnancy. They welcomed Arthur, their first child, and have managed to enforce a solid co-parenting team as Cameron also has a son from a previous marriage. 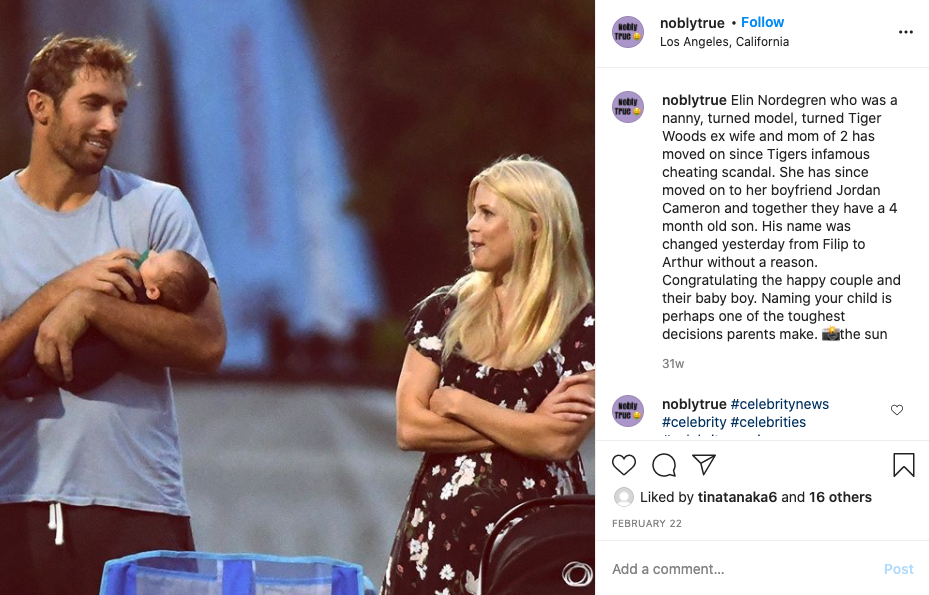 Nordegren and Cameron were seen exiting a Florida courthouse in February 2020 after they officially changed their son's name from Filip to Arthur.

According to a PEOPLE report on September 15, 2020, Nordegren finally sold her North Palm Beach, Florida mansion, after a $20 million price cut from the initial $49.5 million market listing. Nordegren had built the estate after their divorce to keep herself preoccupied.

During the coronavirus lockdown, Nordegren had family members at her place to keep them company while splitting custody of the children with Woods.

Related Article: Kate Upton Wiki: Everything To Know About The Sports Illustrated Model 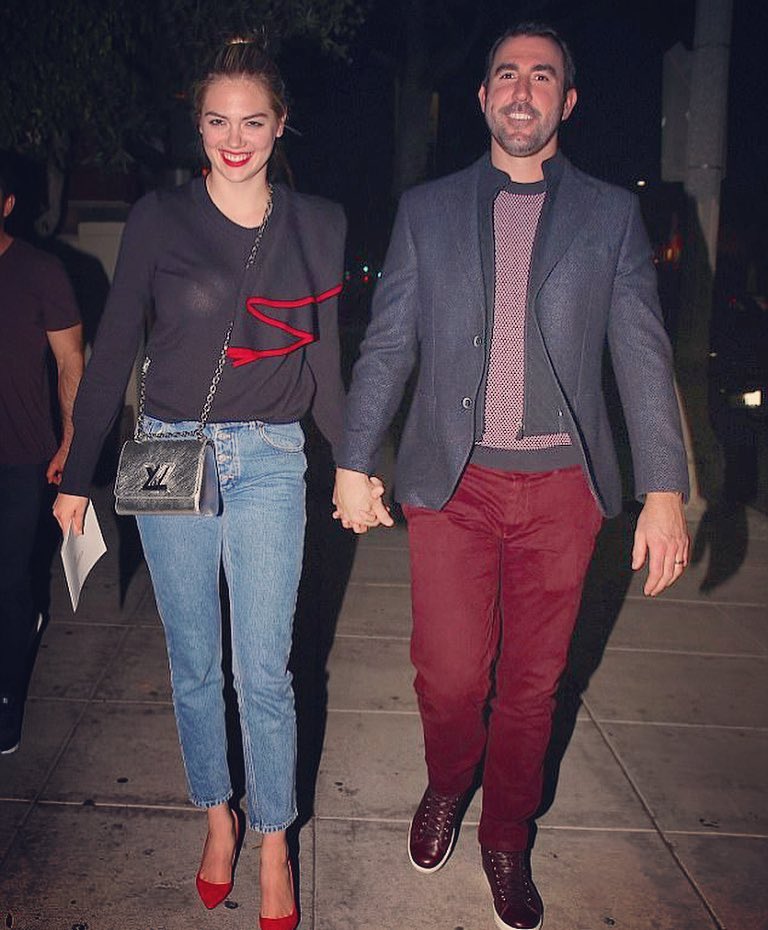 Kate Upton is a supermodel, actress, and now the wife of Pitcher Justin Verlander. A glamorous career not unmarked by scandal has led her to top the chart of Top 100 Celebrities according to Forbes Magazine.

While not many couples can make a divorce as civil and bearable for the children, Woods and Nordegren have proven everyone wrong. "My relationship with Tiger is centered around our children, and we are doing really good – we really are – and I am so happy that is the case. He is a great father," said Nordegren to PEOPLE, a few years ago. On top of everything that she has been through, Nordegren did not let the present circumstances hinder her from having a successful and content future.