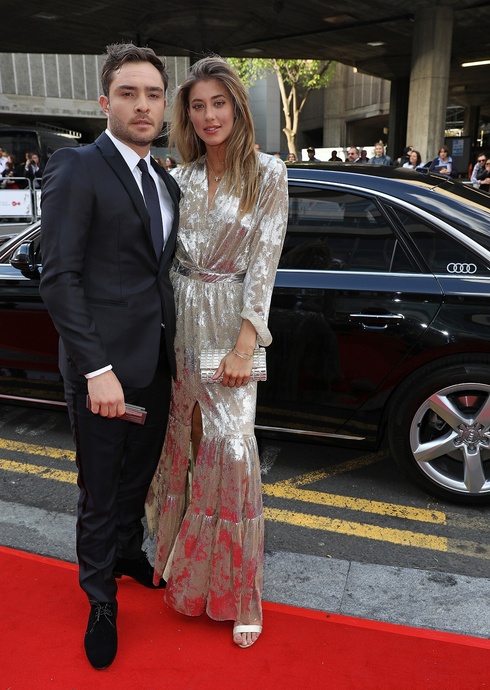 While Jessica Serfaty is popping up in the limelight with her new beau, she has been in the center stage of the media for years now. First spotted at the Brittish Academy Film Awards at Westwick's side in a glittery gown, not many know that Serfaty has a longstanding career of her own. Serfaty is more than meets the eye. The 26 year old is not just simply another well known "America's Next Top Model" contestant. Hailing from Arkansas and maintaining a strong social media game with a solid following (including Ed Westwick), Serfaty is the mother to a nine year old son, the ex wife to a man she married at the tender age of 17, and now the woman responsible for taking Ed Westwick officially off the market and turning him into a smitten kitten.

Get my Dangle earrings! ✨ Link to these guys in my bio. #micheljewels

In addition to snagging Ed Westwick of "Gossip Girl", the 26 year old Serfaty was a contestant on cycle 14 of "America's Next Top Model". She garnered some attention from the demanding competition, despite being only 19 at the time of entering the high demand world of modeling. This appearance was the launch pad for Serfaty's new life which has since been copiously captured in the ever watchful eye of the media. From this move, she gained a gathering of fans from her appearance on the show and had her first taste of fame. While Serfaty was also a part-time actress, it was truly her brave plunge into the demanding world of modeling that scored her her first major success. Overall, she was ranked the number four model among her peers and after production ended, she relocated to L.A. to continue modeling, all still being barely at the young age of 19. Her second success is now unfolding as her updated monetary net worth updated for 2017 testifies, with an estimated net worth of $5 million. Her star is finally again on the rise despite a painful past and failed marriage.

You may or may not know that Jessica Serfaty was once a married woman. The two met at a church gathering with Jessica being 16 at the time while Ididia Serfaty was 22. Jessica soon became pregnant at the age of 17 and in response the two decided to wed with Jessica consequently giving birth to her son, Roman, at 17 years old. After her stint on "America's Next Top Model", Jessica Serfaty wanted to relocate to L.A. permanently to pursue her modeling career. Husband Ididia and son Roman packed up and joined her. Despite a failing relationship, with Jessica wanting a divorce, the two tried to work out differences and, at Ididia's insistence, Jessica agreed one last time to try to make the union work. Ultimately it failed and the two divorced, with Roman and Ididia settling back into life in Jessica's native Arkansas while Jessica stayed on living full time in L.A for the sake of her career. This was a fateful decision which Ididia has trouble coping with to this day. Though the two alternate custody of their son for major major holidays and seasonal school breaks, Jessica was ultimately forced to make the heartbreaking choice to remain in L.A. for the sake of her work. She only sees Roman during his summer and Christmas breaks from school which remains a sore spot of regret for her to this day. However Serfaty shuts down critics who may disparage her parenting by repeating a judge's recommendation to her urging her that she could not possibly be a full-time co-parent in Arkansas while modeling and acting in Los Angeles. 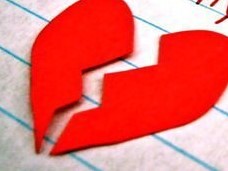 In addition to having Brit Ed Westwick on her arm, Serfaty has racked up her fair share of heartthrobs. In 2016 alone, Serfaty dated another British born star, Niall Horan, formerly of One Direction. She also has had a relationship with Joe Jonas. Serfaty's relationship with Jonas was sparked after the duo were spotted following Jonas' breakup with Gigi Hadid. Serfaty was then photographed with Niall Horan from One Direction fame in a paparazzi photograph snapped while he was driving her home after a night on the town. 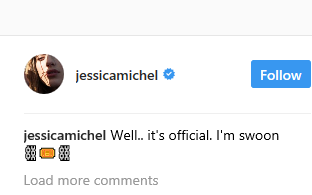 Serfaty is a massive presence on social media with an Instagram @jessicamichel which totes 486,000 followers. It is this Instagram account that identified her as Ed Westwick's new love after a picture of the two was snapped at the British Academy Film Awards. Curious fans soon found out that Westwick was following her Instagram and shortly after from then on, Serfaty was once again making major news. The two quickly became an item though their love seems genuine. The two have even gone so far as to get matching tattoos. Located above their right elbows, they flaunt an elegant yet timeless design featuring each a small ruby red heart shot through by an arrow. The designs are outlined in a bold line of black ink. She officially disappointed all single Westwick fans all around the globe snapping a picture of the two together and posting it to Instagram with a caption reading: "Well.. it's official. I'm swoon."