Before spending over 30 years as a celebrity and sought-after actress, Elisabeth Shue really WAS the girl next door. Elisabeth Shue was born Elisabeth Judson Shue on October 6, 1964, in Wilmington, Delaware to upper-middle-class parents Anne Brewster, vice president of Chemical Banking Co., and James William Shue, a lawyer and real estate developer. In fact, Elisabeth Shue is so all-American that she is actually descended from her mother to one of the original founding fathers of the United States - pilgrim leader William Brewster. After Elisabeth Shue graduated from Columbia High School, she went to the prestigious Wellesley College and later transferred to Harvard in 1984 to earn her political science degree. While in college, Shue caught the acting bug because a friend recommended she try out for commercials to support herself. That began Elisabeth Shue's ascent into becoming a sought-after actress and celebrity. Elisabeth Shue was so successful, appearing in multiple national commercials such as "Burger King" and "Atari," that she left Harvard one semester shy of her degree in 1988 to pursue acting full-time. Even though she returned to Harvard in 1997 to complete her B.A. in political science Elisabeth Shue had no regrets. Truth be told, after her big screen debut starring in 1984's "The Karate Kid," arguably one of the most successful karate movies in movie history, Elisabeth Shue never really looked back until she wanted to.

"Right after (2000’s) Hollow Man, I went back to school. I went back for a whole entire semester and I had five credits to make up in college. So I graduated with my diploma in political science. Harvard is so filled with students with such accomplishment that they probably looked down on me for being an actress. I don’t think that they were really that impressed."

Actress Elisabeth Shue on being a celebrity at Harvard.

Elisabeth Shue was a mere 21 years old when she scored her first leading role in "The Karate Kid" opposite teen heartthrob Ralph Macchio. Shue had already been working steadily in commercials for over five years when she scored the role of Ali Mills, the key love interest in "The Karate Kid." "The Karate Kid" was a blockbuster hit of 1984 and caused Elisabeth Shue to leave college, as more acting offers landed on her lap, making it impossible for her to juggle life as a student and a movie star. In fact, the 80's was a whirlwind acting explosion for the talented young actress, who never stopped working on TV and films from 1979 until 1997. Elisabeth Shue proved that she was a bankable leading lady because her debut film "The Karate Kid," at a budget of only $8 million, grossed $90.8 million. It is one of Elisabeth Shue's most successful movies. More was yet to come.

Back to the Future Two And Three - An Instant Classic

An unexpected opportunity landed in Elisabeth Shue's lap, hot on the heels of her filming "Cocktail" with multi-generational hunk, Tom Cruise, in 1988. Truth be told, the creators of "Back to the Future" were not even thinking about making a sequel, but the success of the first movie - grossing over $381 million dollars - forced the studio's hand. Since the original "Back to the Future" has Marty McFly's girlfriend, Jennifer Parker, in the car with Marty and Doc at the end of the movie, the studio had to create a storyline for her character in the sequels. In 1989, the producers desperately needed an actress who looked like Claudia Wells. Unfortunately for them, the original actress that played the role was unavailable. This bad luck became Elisabeth Shue's good fortune. Good fortune prevailed also for the producers of "Back to the Future" and raised the brand of Elisabeth Shue, who ably stepped in to fill the role, opposite Michael J Fox. It was yet another watershed moment for the actress, landing her the lead in a timeless classic. When shooting began on part two and three of "Back To The Future," Elisabeth Shue played a key supporting role in the series. Due to the fact that original actress who played Marty McFly's girlfriend in the original "Back To The Future", Claudia Wells' mother was sick, Shue replaced her. The studio had to reshoot the ending of "Back to the Future" and insert it into the beginning of "Back to the Future", part two. Okay, let's be honest. With all the current exorcism of old Hollywood - hello, Harvey Weinstein - how inappropriate is it today that Doc essentially knocks out Elisabeth Shue in "Back to the Future" part two and leaves her character in an ALLEYWAY?! All told, "Back to the Future" has grossed a total of $972.5 million dollars worldwide, for the three-part franchise. Elisabeth Shue is part of that legacy, for life.

Elisabeth Shue's early acting career was made opposite all of the leading hunks of the day, in some of the most recognizable and much-loved movies of the eighties. Shue filmed "The Karate Kid," "Adventures In Babysitting," "Cocktail," and "Back to the Future" part two and three, back-to-back. The heady success of these movies laid the foundation to support Elisabeth Shue during the lean spell her acting career was about to take in the nineties.

"I have such a full life, and I’ve also been through many different cycles in my career, so it hasn’t felt different. It felt like, 'Oh, this is the time where you sort of get reacquainted and you go back in, and then slowly, but surely more opportunities will open up.' And they already have."

Elisabeth Shue on taking breaks from acting over the years.

A Shue-in: Elisabeth Gets An Oscar Nomination

After a brief hiatus in her career, Elisabeth Shue returned to the big screen in 1995 opposite Nicholas Cage in "Leaving Las Vegas." In the movie, Shue played against type, immersing herself in the character "Sera," a prostitute. It was a watershed moment for Elisabeth Shue and ushered her into the next phase of her career - a grown up. However, the nomination didn't pan out and Shue lost the award of supporting actress that year to Susan Sarandon in "Dead Man Walking." On the one hand, she had successfully traversed teendom into a serious adult actress, but after "The Saint" in 1996 and "Hollow Man" in 2000, Elisabeth Shue took her longest break from acting. In order to fulfill her greatest role as a mother and wife, Elisabeth Shue had to reacquaint herself with the business when she returned to acting years later. 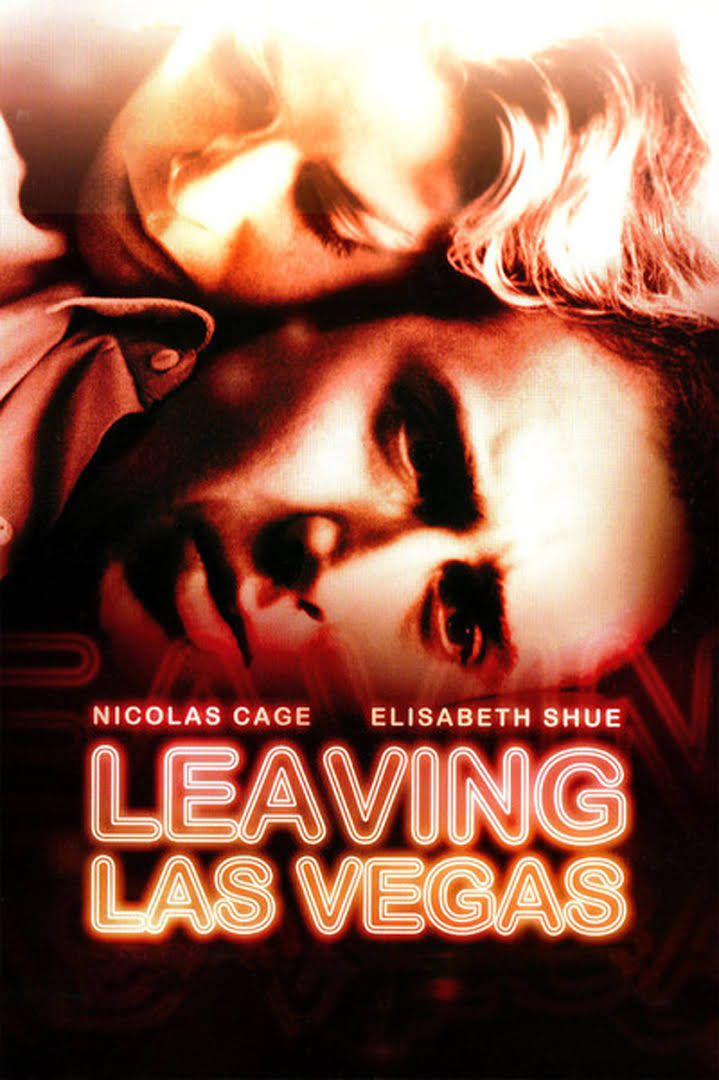 Elisabeth Shue played against her good girl image and became the down-and-dirty prostitute "Sera" in "Leaving Las Vegas" earning her a best supporting actress nomination in 1995. 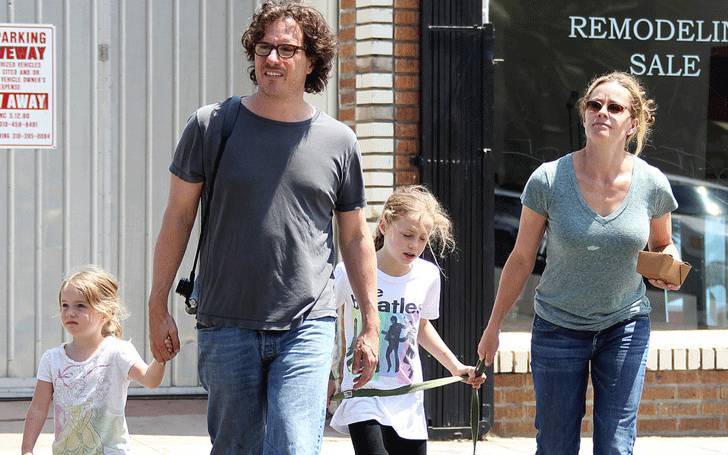 Actress Elisabeth Shue has been married to husband Davis Guggenheim since 1994. The couple have three children together: Miles, Stella, and Agnes.

"Whenever I get down Davis always reminds me that our family has always been my major choice and that you have to accept you're not going to be as successful as you might have been when that's your focus."

Elisabeth Shue on her husband Davis Guggenheim's grounded influence on her.

From Celebrity Movie Star - THEN, To TV Staple: CSI - TODAY

Elisabeth Shue had big shoes to fill when she took on the lead role in the much-loved TV show "CSI," in 2012. Shue played blood spatter expert Julie Finlay for three seasons on "CSI." SPOILER ALERT: Elisabeth Shue was known as the "blood whisperer" on "CSI," until her character's demise in season 15 ended with her character in a coma after being attacked. Elisabeth Shue said RIP to the small screen on "CSI" and the well-respected actress returned again to her original bread and butter and being a movie star - where she remains today.

"While it’s difficult to say goodbye to a beloved character like Catherine Willows, it’s exciting to start a journey with a new CSI, especially when that character is played by Elisabeth Shue.”

Producer Carol Mendelsohn on Elisabeth Shue taking over the lead in CSI from 2012-15. 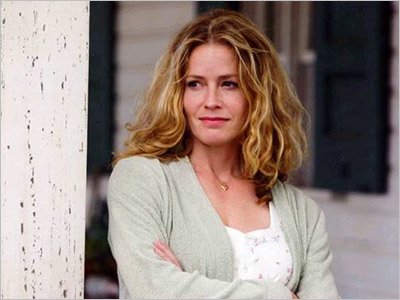 Actress Elisabeth Shue replaced Marg Helgenberger on TV's CSI, playing Julie Finlay for three years, from 2012 to 2015. Elisabeth Shue's character was confirmed by Entertainment Weekly as being killed off. No sour grapes for Elisabeth Shue - she was grateful for the experience and moved onto her starring role opposite Steve Carell in the feature film, "Battle Of The Sexes."

"As an actor it's harder to find stimulating material when you get older – I spent 10 or 15 years playing moms because in film those are the parts people in their thirties and forties end up playing – but television offers choice. The nice thing about CSI is they sign people for a year so you have freedom. I was petrified about committing six or seven years to one show."

Elisabeth Shue on going from film to TV and working on CSI as a series regular.

The Battle Of The Sexes

Elisabeth Shue plays the wife of the infamous Bobby Riggs in the feature film "Battle Of The Sexes," starring Emma Stone. The film recounts the true story of the mixed tennis match between 55 year old Bobby Riggs, played by Steve Carell, against the then-29 year old tennis legend, Billie Jean King. Elisabeth Shue turns in a remarkable performance as Priscilla Wheelan, wife of the sexist showman Bobby Riggs. The movie adds yet another feather in the cap of Elisabeth Shue, whose already stellar career is experiencing yet another resurgence. At 54, the ageless actress shows no signs of slowing down.

“People don’t realize how rare it is to be in movies you really care about and you’re proud to be in."

Elisabeth Shue on her over 30 years in Hollywood.

Elisabeth Shue just wrapped up the movie "Death Wish," a remake of the Charles Bronson classic. Shue plays the wife of Bruce Willis in the movie and it is due for release in 2018. On the personal front, Elisabeth Shue gets to pick and choose her roles while remaining devoted to her happy family. Elisabeth Shue and husband Davis Guggenheim sold their 1924 Hollywood Hills home in 2004 and moved back to Chicago to live a less hectic life away from the spotlight and to give their children the best start in life. For the rest of us, who came of age in the 80s, Elisabeth Shue will always remain the girl-next-door. Her return to her family roots in Chicago shows the measure of her mettle. To have survived the peaks and valleys of a 30 year acting career in Hollywood shows just how strong Elisabeth Shue is. The next phase for the talented actress is just around the corner. Until then, she remains a powerful role model to her children and many women around the world. Thank you Shue; our hats off to you.

"There were times when I was not as wise, when setbacks would make me feel emotional, I used to sit there and think 'I'm better than this, I can do better, why has this happened to me?' But life isn't like that, it's about continuing the road you're on and blessing the journey."

Elisabeth Shue reflects on her career in Hollywood.