Tom is a Swifty. 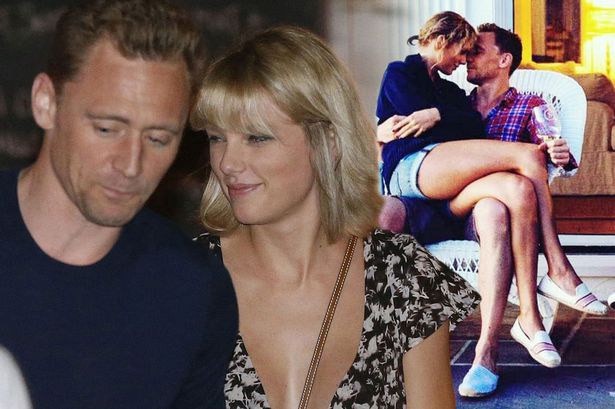 They are cute together & the paparazzi thought the same.

Celebrity relationships are hard in general, but when you have the paparazzi on your hind end, I think it may be harder than remembering a line in their next movie. Their summer fling was short lived because they had nowhere to hide. Taylor Swift had a huge 4th of July party in 2016. Tom hurt his back before the party and got hurt so he didn't want the sun to hurt his scratch, so he asked Taylor's friend for a shirt and funny enough the only shirt she had for him to wear was an I heart T.S. shirt. Paparazzi sure jumped on that because it spread pretty quickly. Later on in an interview he went on to explain why he wore it. Like most couples they have to work hard to nurture their relationship, especially when it's so fresh and new. But, with 2 very famous people, it can be harder for them to grow. When Tom has a gorgeous and very popular girlfriend like TaySwift, he has everyone wanting to know what is going on. They are both people that we will never forget, but with their relationship only lasting a few months, hopefully we won't forget these people did mean something to each other at one point. Taylor does love her some English men, that can be said. But, the age difference between the 2 is actually something that most people haven't seen her do. Age is just a number when it comes to a strong attraction.

The Man, The Legend, The Actor

You have seen Tom Hiddleston in the box office many times. From movies such as Avengers as Loki, Kong: Skull Island, The Night Manager, Thor as Loki again, and many more. He has many more movies in the future, that is for sure. He has a talent that just pours off the screen and you want to see more. You don't always see an actor that takes on his role and you imagine that person as the character, but Tome is that actor. Every role he plays makes you feel like you are watching that person through him. Being a great actor is hard work though. To get ready for King Kong: Skull Island, Tom would rise and shine at 4am every morning and endure SAS training. Every role he plays in has some strenuous activity. Tom also does all his own stunts, so when you see him jumping over something or running through something, that's all him.

Great Movies At His Age

Avengers, Thor, King Kong, and the Night Manager are just a few movies that Tom Hiddleston has acted in. At the young age of 35, this man already has so many movies under his belt. A few others include The Crimson Peak, Only Lovers Left Alive, War Horse, and The Deep Blue Sea. There are so many others, but we would be here all day listing all of his great movies. Many actors his age have a lot of movies under their belt as well but not many. Tom actually did not go to school to become an actor. He attended very prestigious schools such as Cambridge and Rada. An agent spotted him in a school production of A Streetcar Named Desire. That's when he really started landing roles in t.v. movies and bigger movies. Following huge stars from Europe, he was timid to say the least. Actors like David Tenant and Benedict Cumberbatch were something to follow. Even though this wasn't his first choice, this is who he is now. Acting is his job, it's in his heart. It comes very naturally to him. It's like riding a bike to him now, if he was anything thing else, he'd have to learn all over again. He's also friends with most of his co-actors if not all of them. Being Loki, or any other character, he gets close to his on screen partners. It's fun going to work when you are friends with the people you work with.

Doesn't Let Money and Fame Get to His Head

Small ego for such a large Net Worth

#TomHiddleston seen cradling a puppy while out on a walk in London on November 9, 2017

Fans are more like friends and family to him. Being such a great actor hasn't gone to his head. He may have the normal actor moments, but many comments about him are that he is so nice and humble. He loves puppies. He doesn't like to call his fans "fans" Everyone just shows him so much love and attention, but it doesn't make him feel like he is better than them. He is very humble when it comes to his followers. Most everyone loves him and it's easy to see why. He cares about children and UNICEF. He went on Jimmy Kimmel live and off screen he did a quick clip on youtube thanking everyone for their donation to UNICEF. He stated no matter how small or how big it was still very appreciated.