From being a Parisian dreamer to becoming one of Hollywood's most notable actress, Emma Watson teaches young girls to not only dream, but to live out loud.

Young Emma Watson was born in Paris, France on April 15, 1990. The young actress lived with her parents who both were attorneys until their separation where she relocated to England with her mother. As young as the age of six, Emma Watson remembers wanting to be an actress. Because Emma Watson resided with her mother in Oxfordshire, she was able to attend the part-time theater school Oxford branch of Stagecoach Theater Arts and trained in order to pursue her future dreams. Emma Watson would receive tutoring on acting, dancing, and singing for hours at a time. Emma Watson also excelled in her academia, upon graduating from the Headington School, she scored all As in the GCSE examinations for the ten courses she was enlisted in. Emma Watson continued pursuing her dreams while acting in stage productions and local plays until her big break in the Harry Potter franchise which started in 1999. 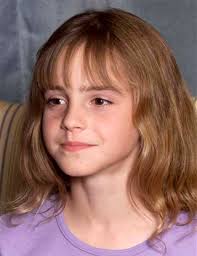 Pictured here before the spotlight, Young Emma Watson smiles on.

It was in 1999, when young Emma Watson was cast for the role of Hermione Granger, when her Oxford teacher lead casting agents directly to the talented young actress. After about eight auditions, Emma Watson along with other friends were advised that they'd been cast for the leading roles of the move Harry Potter and the Philosopher's Stone. Emma Watson's performance in the movie was admired by audiences and critics alike. Emma Watson was nominated for five awards for her performance. From that point, Emma Watson went on to star in seven other Harry Potter films alongside her original cast members. It was in 2012, when Emma Watson began acting in more films outside of the Harry Potter franchise to include The Perks of Being a Wallflower and The Bling Ring.

The Many Movies of Emma Watson

The franchise of Harry Potter holds a net worth of over $7.7B. The movie has a total of eight films in the franchise of which all original cast members were apart of. Harry Potter is a British-American film series that was originally a novel by J. K. Rowling. Many top directors and producers came together to complete the franchise which took about ten years to finalize. Chris Columbus, Alfonso Cuarón, Mike Newell, and David Yates were the some of the directors who worked as a team on the movie series. Prior to production, there was a small battle for Harry Potter between screenwriters and Steven Spielberg who wanted the film to me more American with a leading American actor in the role of Harry Potter. However, Spielberg left the project and the series went on to become one of the top grossing movies series of all time. Spielberg lost out on a wonderful project. Sorry, Steve!

The Tale of Despereaux

The Tale of Despereaux is a British-American animated film based on the book by Kate DiCamillo. The movie which is narrated by Sigourney Weaver is about a sailor and his favorite pet rat who dock in the Kingdom of Dor during the celebration of Royal Soup Day. The kingdom is also well known for it's delicious infamous soups. During the celebrations, the sailor's pet rat enters the Queens chambers and accidentally falls in to the Queens bowl of soup. The Queen who's frightened by the sight of the rat, has a heart attack and dies. Following her death, the King forbids soups and rats alike from the kingdom, leaving the pet rat who'd been left behind by the sailor in dire stress. The movie continues filled with highs and lows, but as always ends happily. Emma Watson played the kings daughter Princess Pea. The film grossed $86M.

My Week with Marilyn

My Week with Marilyn, starrs Emma Watson as Lucy as a part of the production crew for the 1957 movie The Prince and the Showgirl that Marilyn Monroe was shooting in London. The film follows a tour Marilyn received from companion Laurence Olivier while London during the filming of the movie. The movie My Week with Marilyn was filmed in the same studio of the original 1957 film and grossed $35M.

Beauty and The Beast

The Disney classic was brought to life with Emma Watson as Belle and Dan Stevens as the Beast. The film was a musical romantic fantasy that followed the script of the original 1991 animated film magically. Emma Watson was praised for her performance and ability to bring audience member close to their favorite Disney character. Belle was adorn with the lovely yellow dress of the animated character and her hairstyle resemble the character as well, making her look just like Belle. The cast displayed their artistic skills with lavish dance ensembles, beautifully singing their lines and keeping audiences on their toes. Overall, the movie grossed $1.2B in the box office.

@beautyandthebeast opens today! I hope you have as much fun watching it as I did making it. Love, Emma 🌹 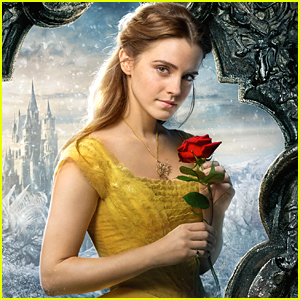 Timeless Beauty from the movie Beauty and the Beast. In pictures with the remarkable yellow dress worn by Belle in the original animated movie.

Emma Watson is a part of the Fair trade fashion brand, serving a creative adviser to the company's Spring line. The clothing line has since been featured in Teen Vogue, Cosmopolitan, and People magazines.

Emma Watson is not only a pretty face who acts and models. The young woman was named UN Women Goodwill ambassador in 2014. Emma Watson promotes education for young girls in the countries of Bangladesh and Zambia. Emma has given speeches and done campaigns all in the name of female equality. Emma Watson has won the Feminist Celebrity Award from the Ms Foundation for Women in 2014. From being name one of the "Top 99 Outstanding Women in 2015", to battling critics for magazine covers, Emma Watson is an accomplished young woman who enjoys the perks of her career and makes a stand for every girls who live with the hopes of reaching her fame and success.

Ready for anything after @SheFighter training with Lina Khalifeh. She opened the first self defence studio for women in the Middle East. I’ll be chatting with her and 8 other activists about challenging gender stereotypes at @OneYoungWorld Ottawa later today.

Executive Director of UN Women Phumzile Mlambo-Ngcuka and I! Stand up for gender equality at www.heforshe.org

Pictures on the Red Carpet

#Repost @calvinklein with @repostapp. ・・・ At the #metgala, actor + activist @emmawatson in a custom Calvin Klein Collection look designed in collaboration with @ecoage and made from sustainable cotton, satin, and taffeta woven from recycled plastic yarn. #mycalvins #manusxmachina 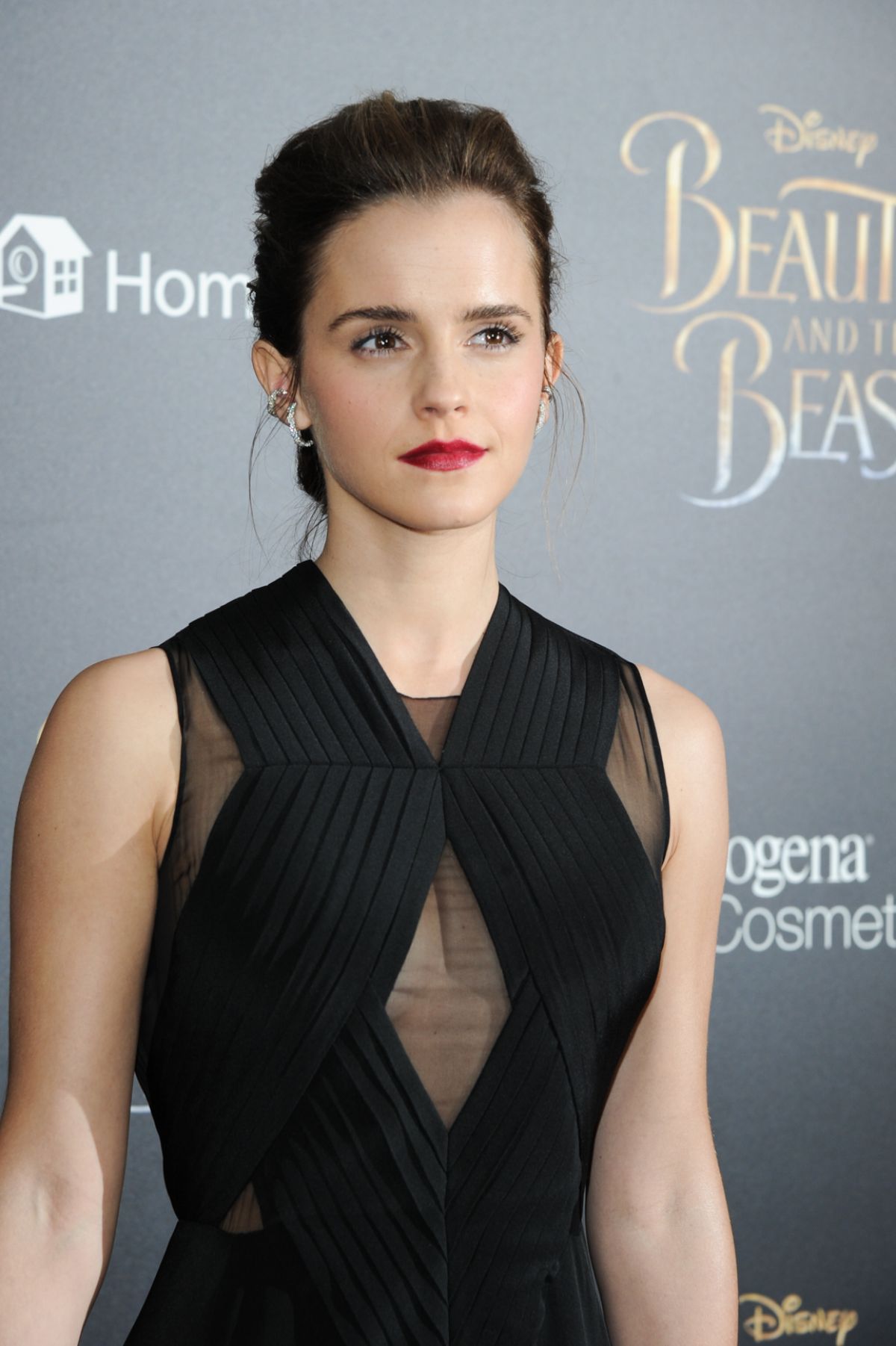 In all her pictures Emma Watson looks stunning. Here, she is at the premiere of Beauty and the Beast wearing a black dress with an up-do hairstyle on the red carpet. 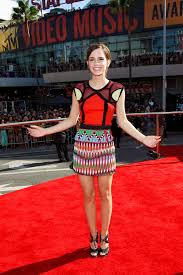 Emma Watson has a little fun at the MTV Awards laughing and sharing stories in pictures. 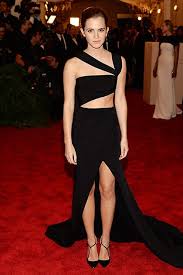 Emma Watson looks stunning with a pulled-back hairstyle and curve hugging black dress in her pictures. 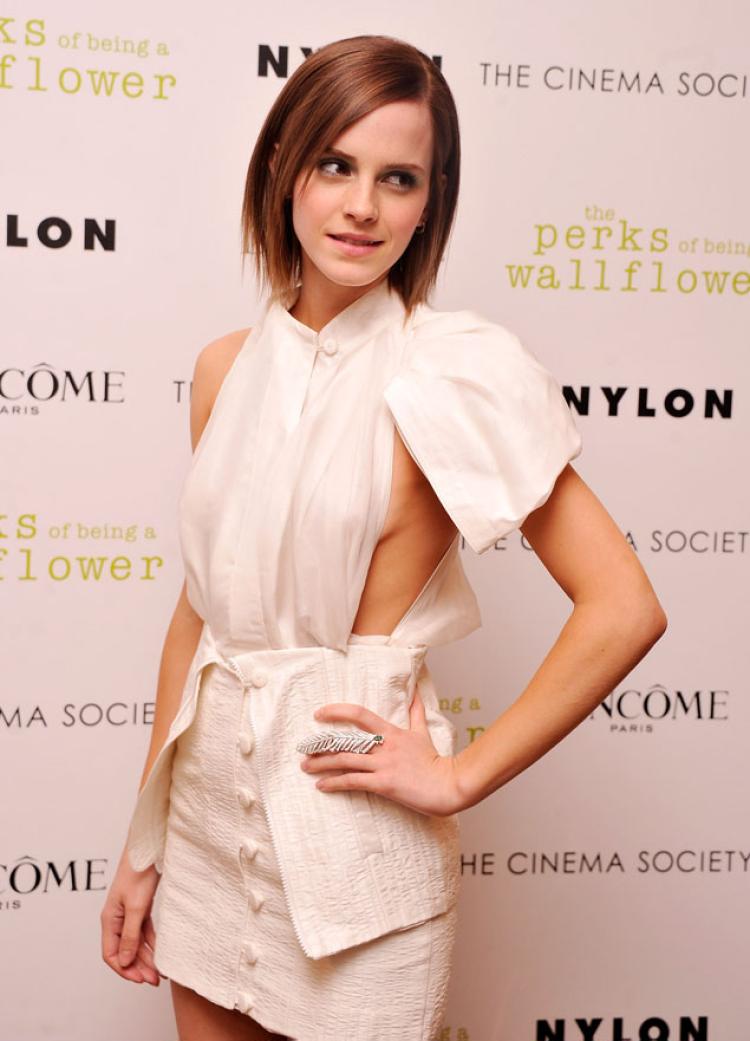 Emma Watson shows a little skin in this white ensemble. 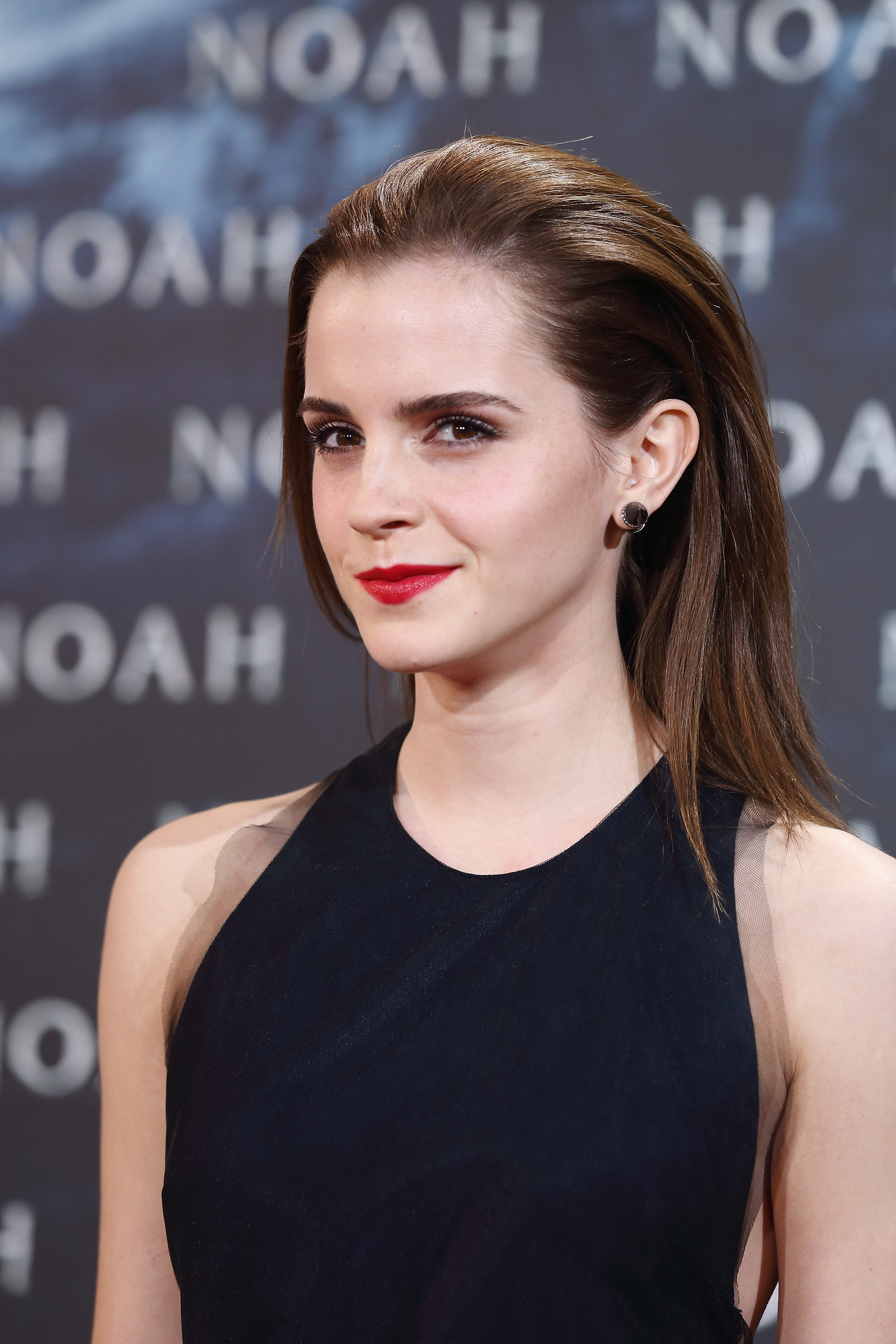 Emma Watson's hairstyle requires minimal upkeep as she graces the red carpet in this black gown. 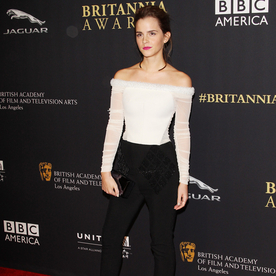 Emma Watson at the Britannia Award wearing a black and white ensemble with minimal makeup and jewelry. 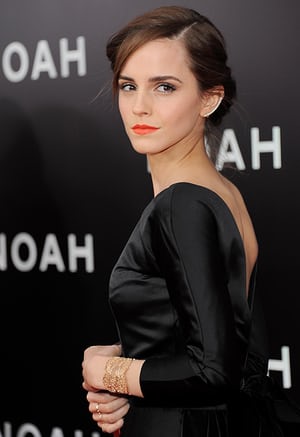 Emma Watson appears to be in control in all her pictures no matter how young she is. 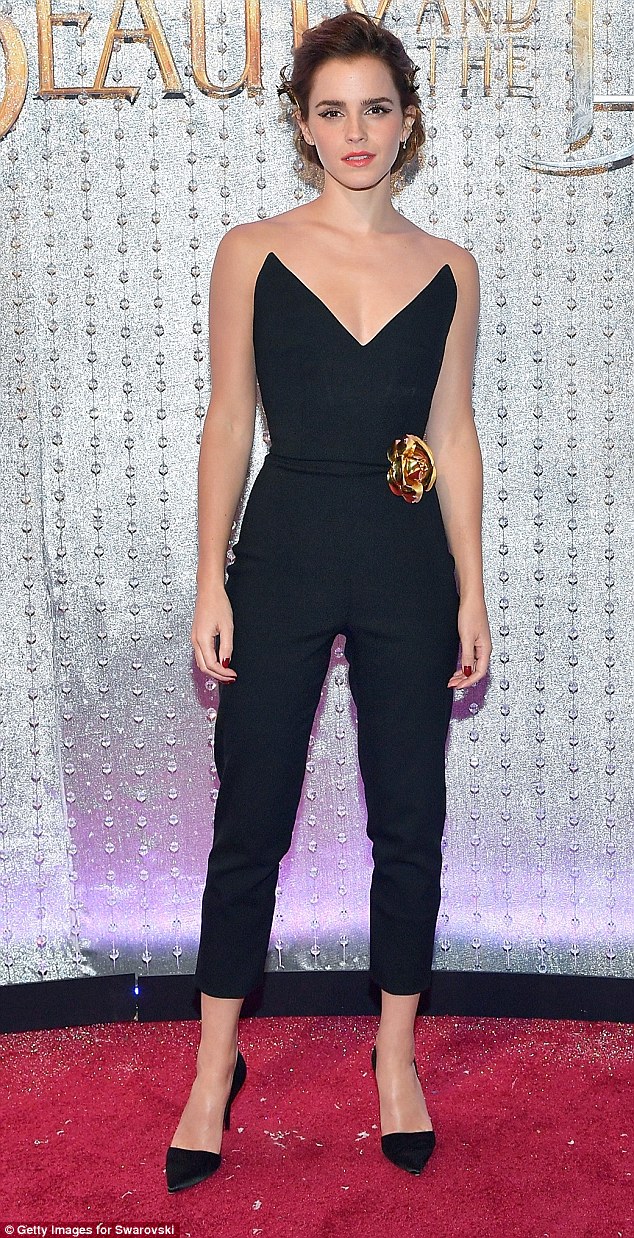 In this picture for Beauty and the Beast, Emma Watson sports a gold rose as an accent jewelry piece. 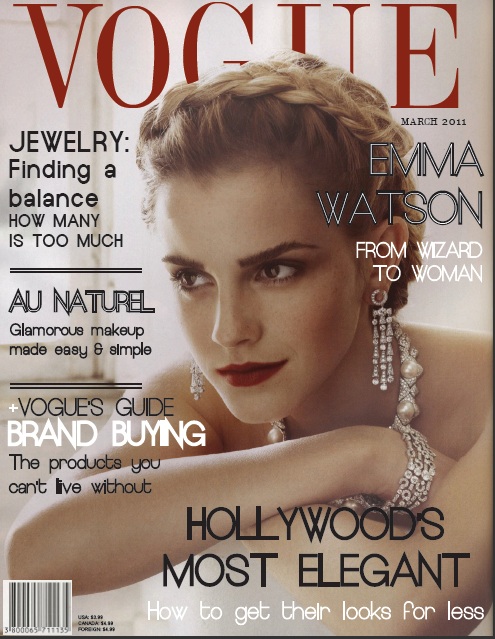 Once again, looking classically timeless in the March 2011 vogue cover 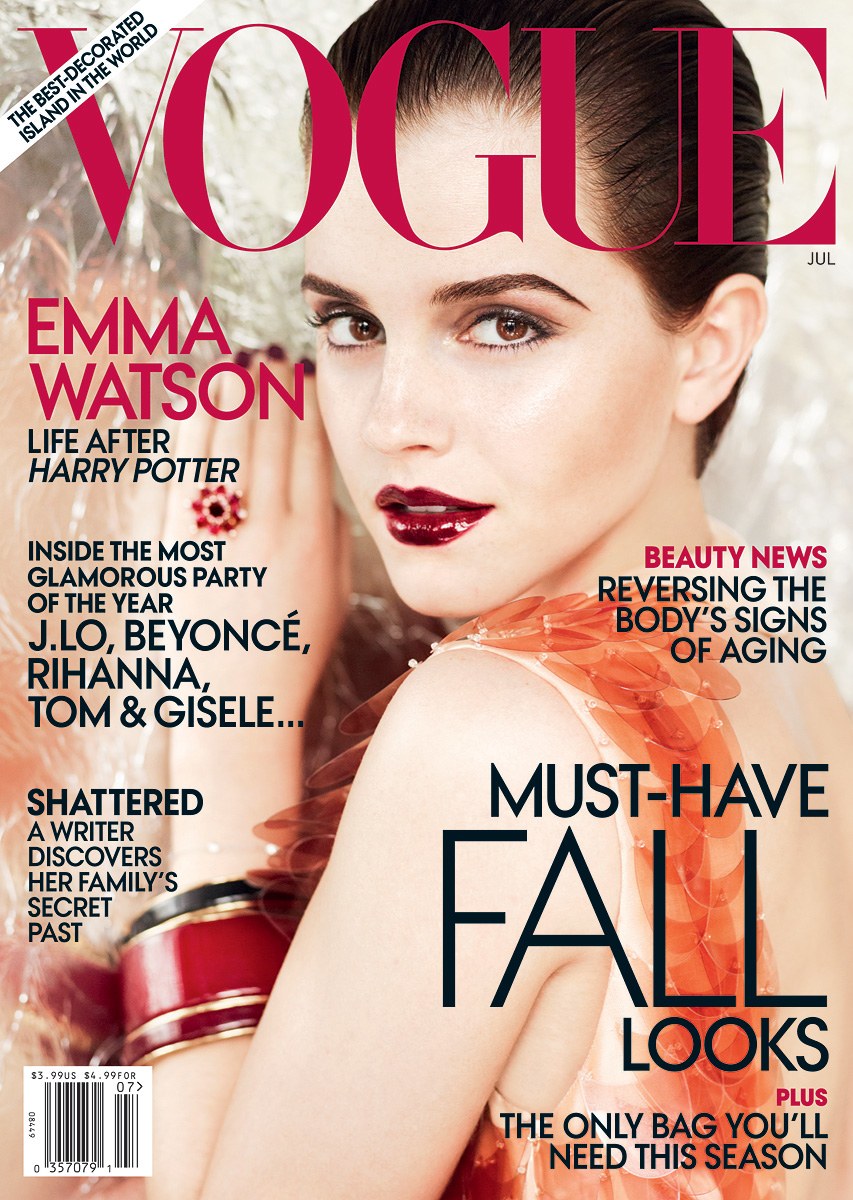 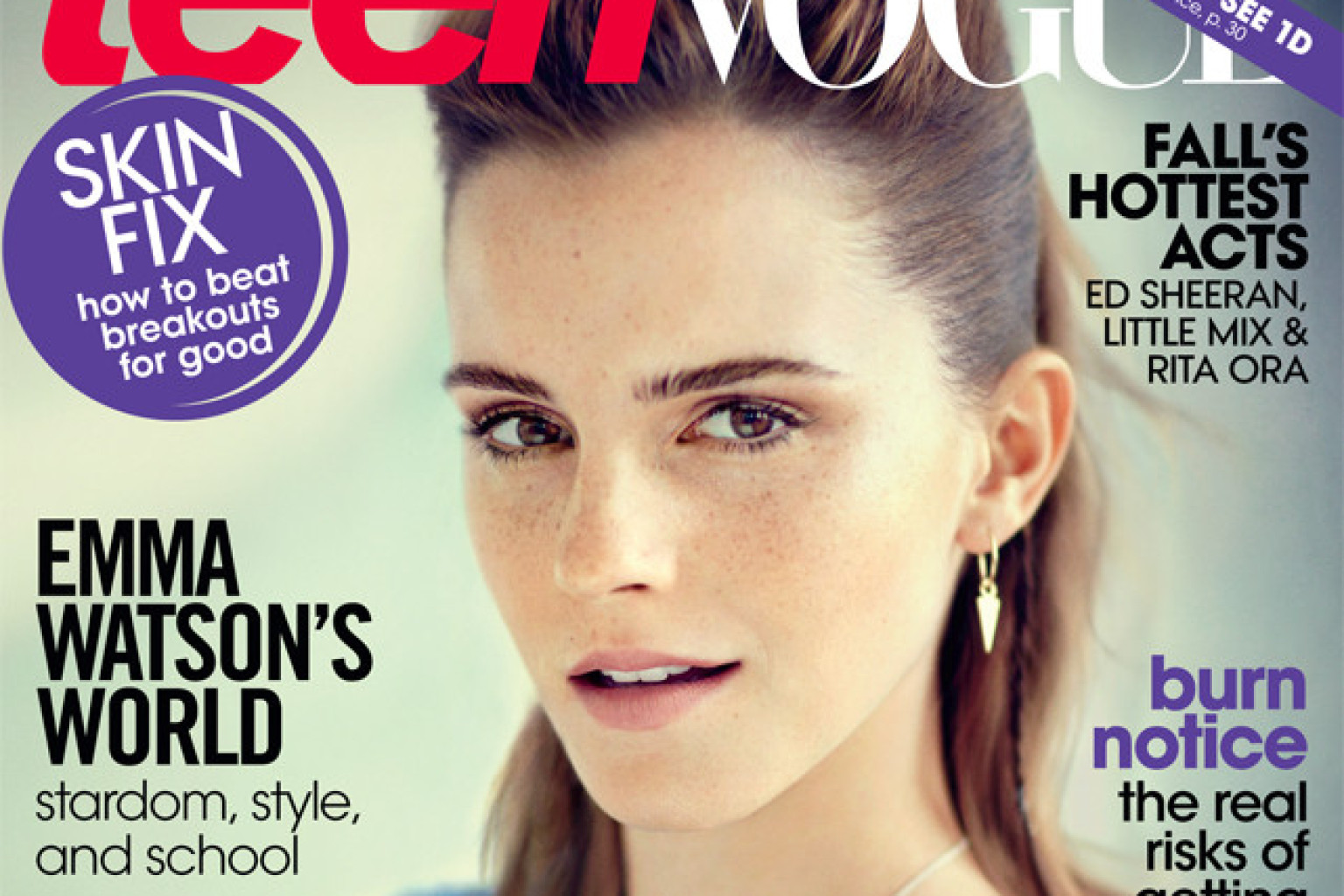 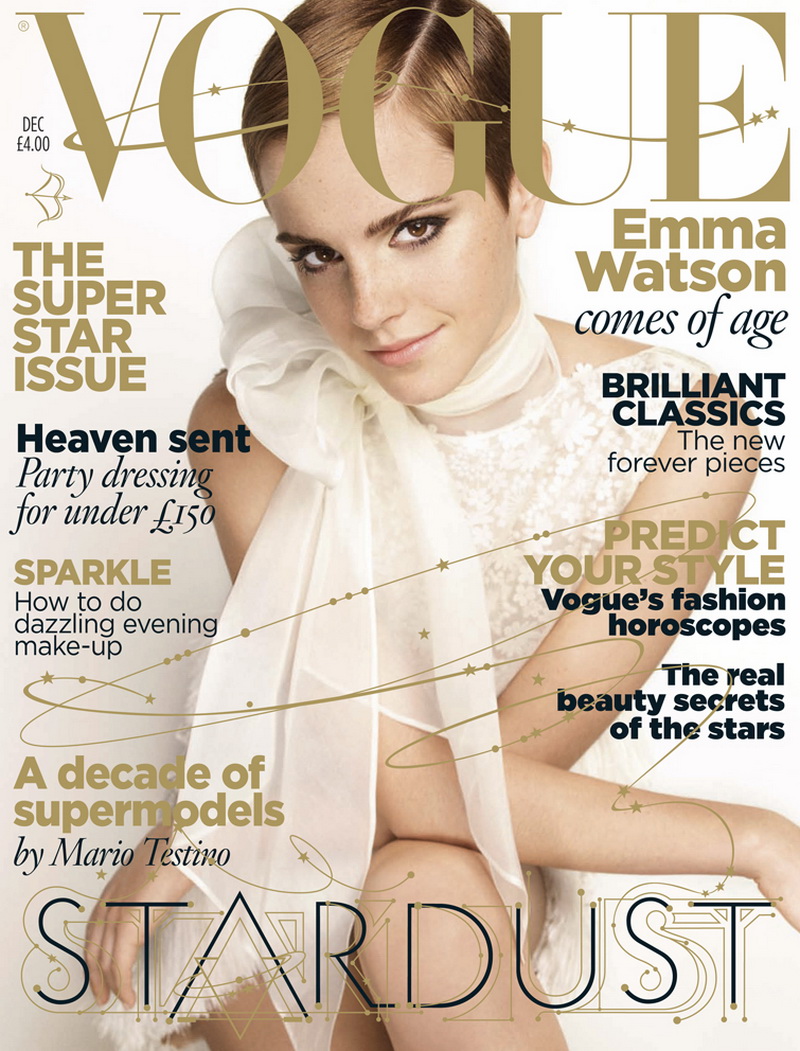 Lady in White, Emma Watson declares her beauty in this Vogue cover.

Suit is by @maiyet who are committed to forging partnerships with artisans globally and has entered into a strategic partnership with @buildanest, an independent nonprofit organization dedicated to training and developing artisan businesses to promote entrepreneurship, prosperity and dignity in places that need it most. The jewellery is a selection of @catbirdnyc, whose pieces are handmade in Brooklyn using fair-trade and recycled gold, while all of their stones are conflict free, and @moniquepean #ecoloves fashion information, in association with @EcoAge 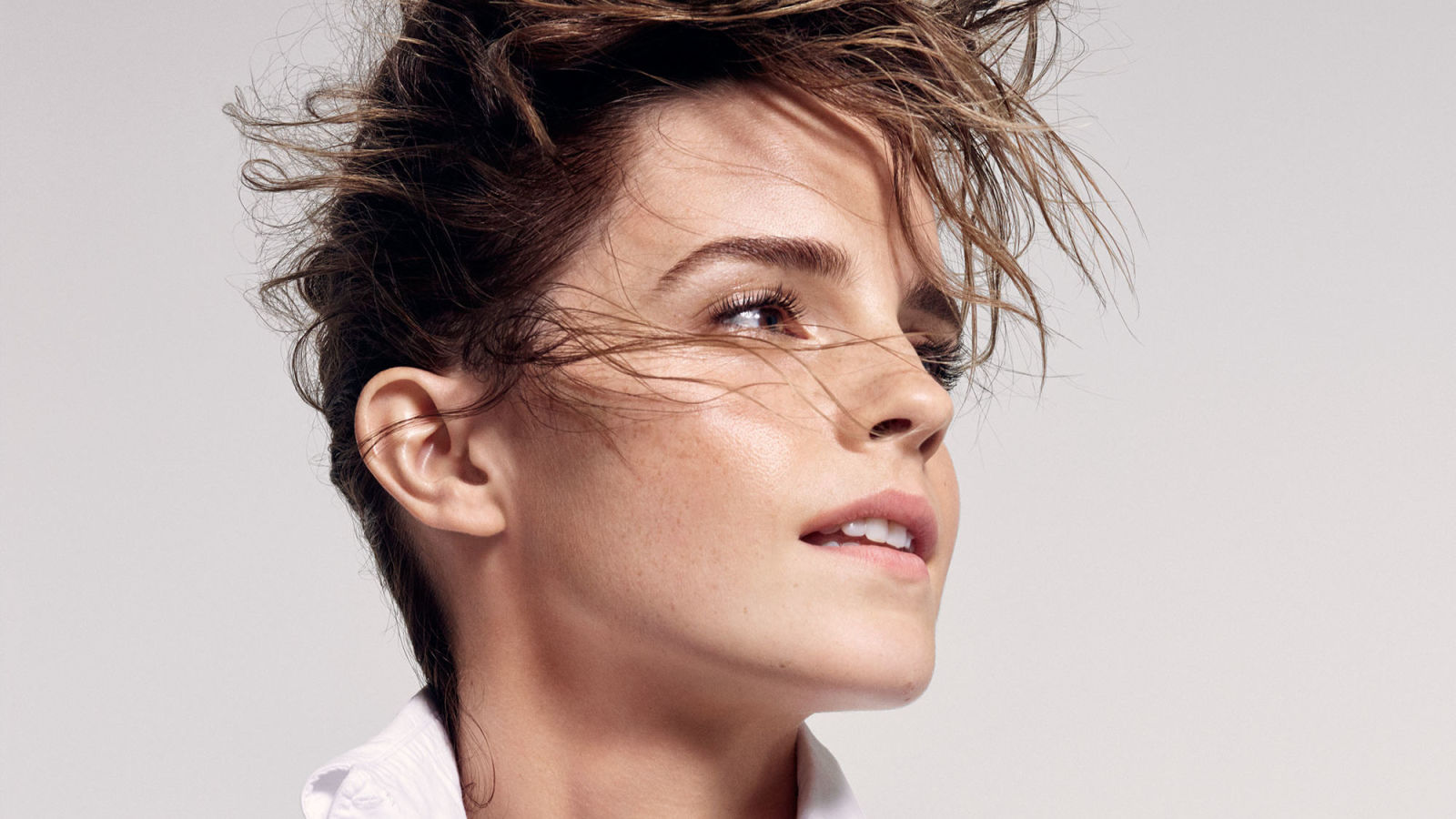 As always, Emma Watson displays an usually portrayal of classic Hollywood in pictures. 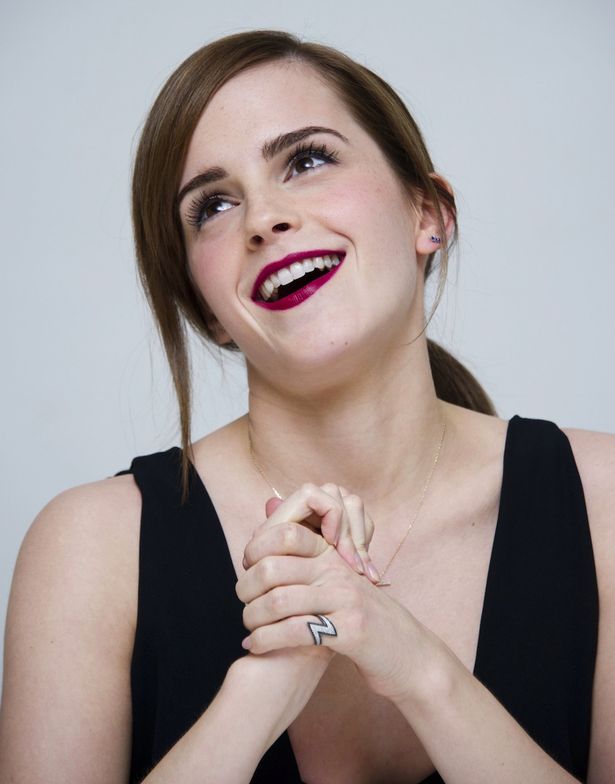 One of the rare pictures of Emma Watson laughing in pictures. 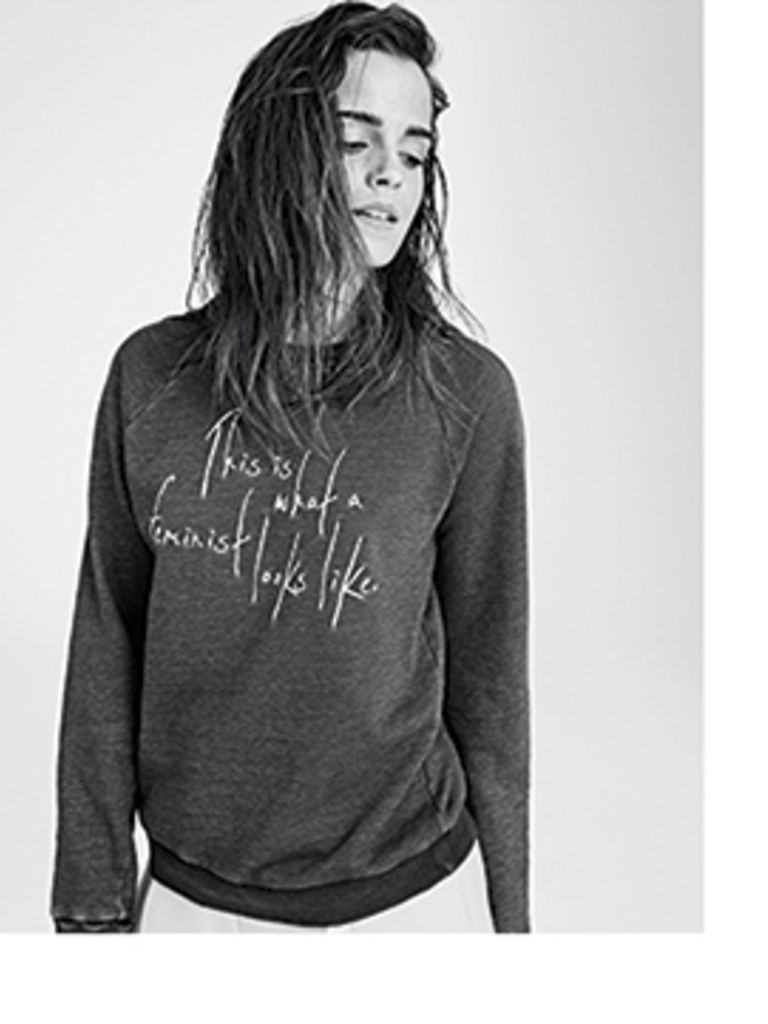 With most of her pictures looking prepped for the red carpet, Emma Watson sports a down-to-Earth look with relaxed hanging hairstyle 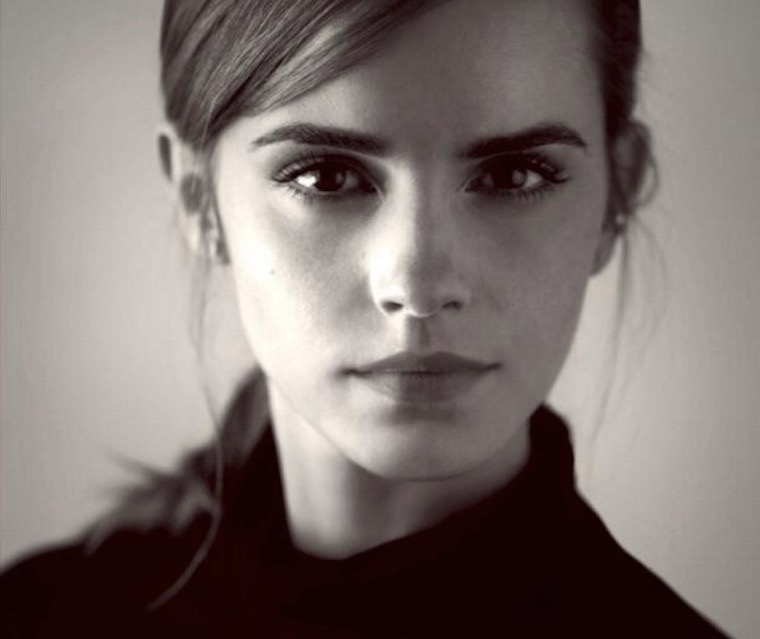 A classic beauty, Emma Watson is truly timeless in her pictures.

Removing the Cape and Mask 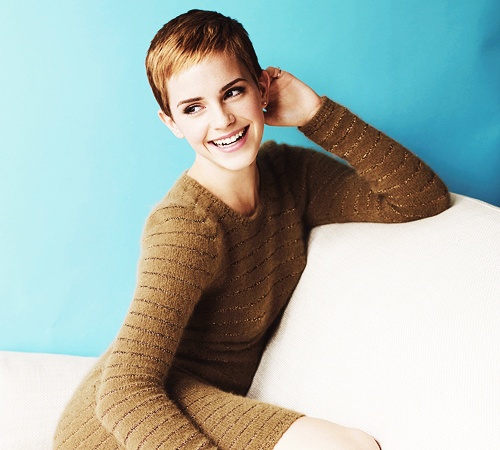 Emma Watson is shown in pictures laughing and sporting a pixie hairstyle.

When this Superhero of a young woman is done with the acting, activism, and modeling, she spends her spare time doing some interesting things. Here are some fun facts about Emma Watson:

1. Her full name is Emma Charlotte Duerre Watson and she hails of British and Turkish descent. 2. Emma Watson is very athletic, she's known for playing field hockey, tennis, rounders and netball. 3. Emma was the face of Burberry's Autumn/Winter 2009 collection and for the 2010 Spring/Summer collection. 4. One of her favorite actors is Johnny Depp. 5. Emma is a cat lover, her two cats are Bubbles and Domino. 6. She is a huge Julia Roberts fan. 7. Her favorite color is light blue. 8. Emma Watson is a proud feminist. 9. Emma Watson's favorite past-time is reading. 10. Emma Watson has a net worth of $60M. We can't wait to see what she does next!