A brief about Noah Taylor

Noah George Taylor was born in 1969. He is a proclaimed English-Australian actor best known for his roles as teenage David Helfgott in Shine, Locke in HBO series Game of Thrones, Mr. Bucket in Charlie and the Chocolate Factory and Danny in the Australian cult film, He Died with a Felafel in His Hand. Taylor is the eldest of two sons. He was born in London, England, to Australian parents, Maggie who was a journalist and book editor, and Paul Taylor who was a copywriter and journalist. His parents relocated to Australia when he was five, and he was raised in Clifton Hill and St Kilda which are small suburbs of Melbourne. His parents divorced when he was just 14. Taylor dropped out of school and left home at 16 with no intention of becoming an actor. A friend suggested that he try theater as "something to do at the weekends". Taylor decided to give it a shot found the experience so enjoyable that he chose to make it his career. After acting in plays at St. Martin's Youth Theatre in South Yarra for a year, he garnered the attention of director John Duigan, who later cast him in the 1987 film, The Year My Voice Broke, the first part of a planned trilogy. Taylor also acted in its sequel, Flirting (1991), alongside Thandie Newton with Nicole Kidman and Naomi Watts in supporting roles. When he is not acting, Taylor loves to draw and paint. He is also an accomplished musician, who can play viola, guitar and French horn. He plays the piano by ear. He has sung and played guitar in many of his own bands, including Honky Tonk Angels, Cardboard Box Man, Flipper & Humphrey, Access Axis, and The Thirteens. He names Johnny Cash and Lou Reed as two of the artists he really admires. On 14 November 2012, he married Dionne Harris who is an Australian fashion designer. Taylor lives with his family in Brighton, East Sussex.

A brief about his wife Dionne Taylor

Their relationship and children

The Actor/Artist Noah Taylor and wife Dionne Taylor, married since 2012, announced the arrival of their baby. English-Australian actor and artist has always been a favorite amongst his fans with his acting skills and beautiful musical accomplishments. This talented actor and musician is all set to amaze his lovers and fans with an exciting news. Taylor and his Australian fashion designer wife, Dionne might be expecting a baby, although they have not confirmed the news yet, but it has been spreading through the grapevine. The popular viola player and his beautiful wife Dionne are expecting their first child. “Noah and Dionne are indeed expecting their first baby. They are going to be parents and they are quite excited about it,” said the source close to the couple. He added, “The Dionne got pregnant a month or two ago. Noah and she had been planning it for quite a long time. They planned the pregnancy earlier this year and now things have finally worked out for the both of them. Noah and Dionne are very happy with the news.” “They have already done much of the needed preparation for the unborn baby and are eagerly awaiting the child to be born. They might be one of the most excited new parents I’ve ever seen in my life,” stated the informant with a smile on its face. The gossip monger further explained: “They have had some parenting experience, taking care of Noah’s daughter Martha from a previous relationship. But they are still a bit nervous and are getting help from Noah’s mother Maggie and a few of their friends. The couple has already built a nursery and bought every necessary item for the baby and the future mother.” The source also said that the couple would prefer to have a daughter as their first child as the fashion designer wife can surely dress up their girl beautifully. “She wants a cuddly little baby girl whom she can dress up in her designs,” said the source. The source also cleared the reason as to why the couple has not yet announced the news officially. “Because they want to surprise their fans!! They want to keep the news a secret so that they could have a big reveal when the right time comes and surprise everyone,” replied the source. So, if Taylor and his wife are indeed expecting a baby, then we wish them all the best for their future. The husband and wife duo dated each other for a long time before tying the knot in 2012. 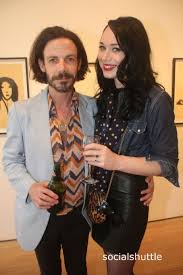 Noah Taylor has a lot of his personal photos and photos of his films on Instagram posted by his fans. He and his wife Dionne Taylor might be accessing Instagram via personal accounts. Noah Taylor has his official page on Facebook. One can follow him on his Facebook page @Noah Taylor.