Get to know more about Jon Bon Jovi's wife, Dorothea Hurley who is a karate instructor. Below are facts about her that you need to know, including her age, her net worth and her ability to be 'Livin on a Prayer' with her rock star husband. 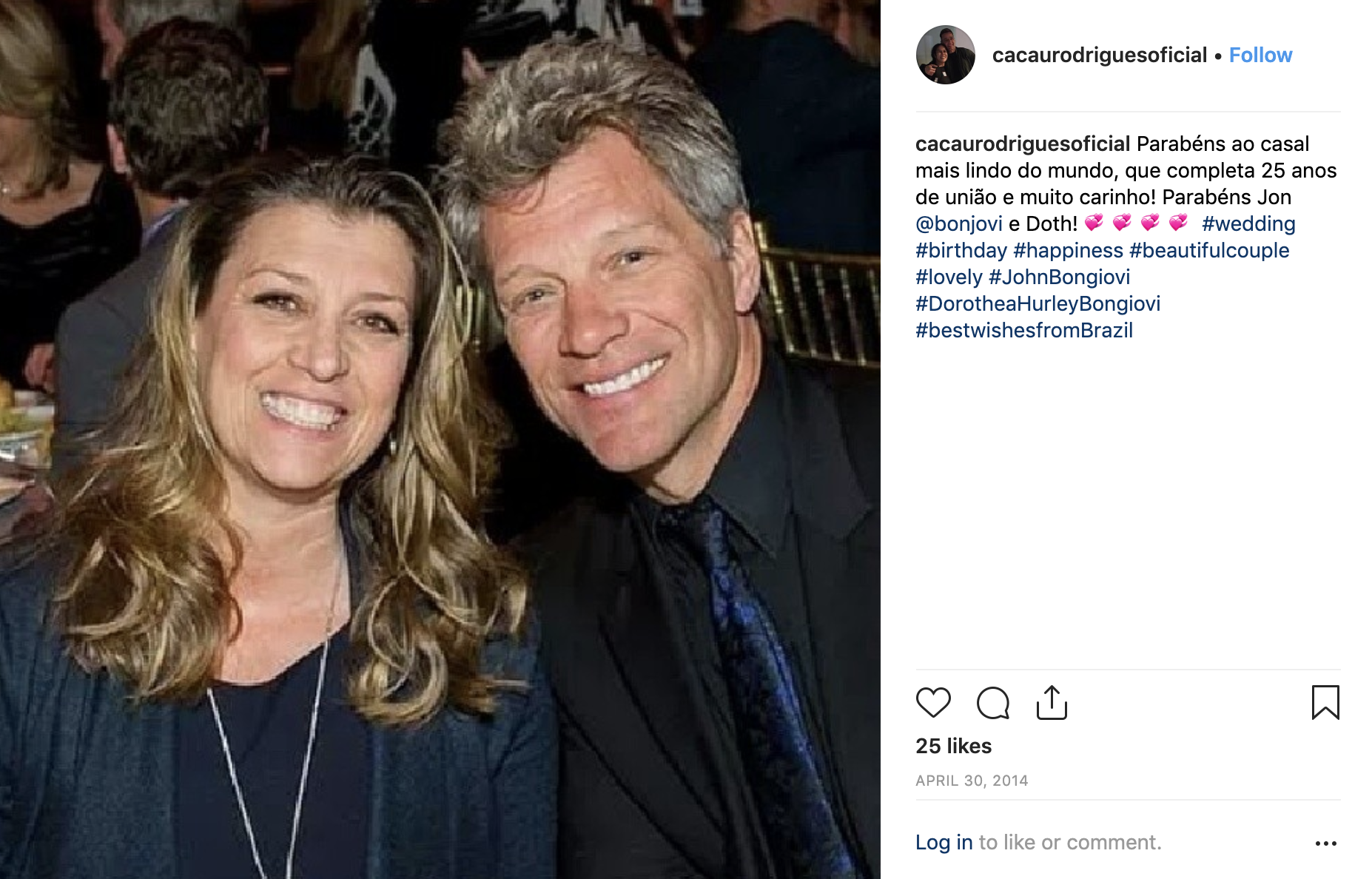 Jon Bon Jovi is one of the greatest singers to have ever lived on earth, and the singer has made a name for himself through his performances as well as his scandals. It's his voice and talent, however, that have brought him this far. At one point during his career, yes, he was known to throw a tantrum or two, but that didn't stop him from being inducted into the Rock And Roll Hall of Fame, earlier this year.

What most people don’t know is that the star that they know, Jon Bon Jovi has a supportive wife behind him, and her name is Dorothea Hurley. When she speaks during an interviews she has nothing but praise for her husband saying that he is a good family man whenever he is off the stage. But as much as we know about Jovi, what do we know about his wife?

Dorothea Harley is a woman who loves to keep a low profile as Bon Jovi’s wife, in fact she was home raising their children while Bon Jovi was traveling around the world. 56-year-old Dorothea Hurley was born in New Jersey to her father, Donald and her mother, Dorothy Hurley. Dorothea Hurley got her name after her parents decided to mix her mother’s name with a close family friend who succumbed cancer before Hurley’s birth.

Jon Bon Jovi’s wife, Dorothea Hurley attended Sayreville War Memorial High School, located in Parlin, New Jersey. She met Bon Jovi while the two were in school, but at the time, she was dating Bon Jovi’s best friend known as Bobby. The two remained just friends for a couple of years. They met when Bon Jovi tried to cheat on his test by looking at her work and despite all that, Bon Jovi and his wife, Dorothea Hurley didn’t start a relationship until in their 20s. Bobby broke up with Hurley and started dating actress Diane Lane. In an interview, Jovi revealed that he loved Hurley from day one and that his song, “Bobby’s Girl” was about her. 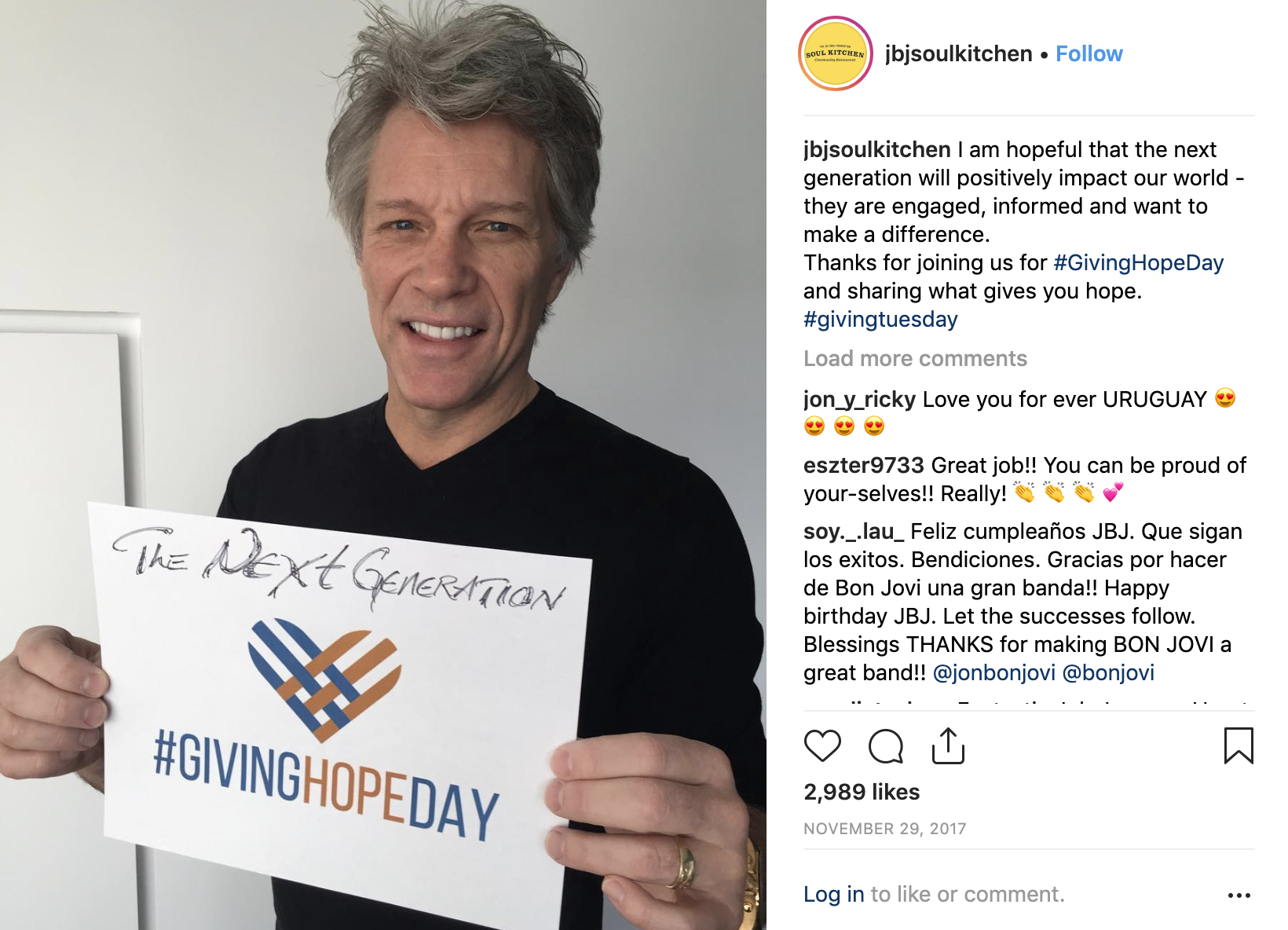 Dorothea Harley was a junior karate champion all her life and even into high school and he gave up on that to be able to go on tour with her husband. After they started a family together, she went back to New Jersey to become a Karate Instructor so that she could give stability to her children. In 1992, she was the 4th best greenbelt karate master countrywide and in 2002 she was revealed to be a 4th-degree black belt holder. Apart from training people on how to defend themselves using the Japanese skills, Bon Jovi’s wife, Hurley co-runs the JBJ Soul Kitchen Restaurant chain, a food joint that encourages the customers to pre-purchase meals for the homeless. 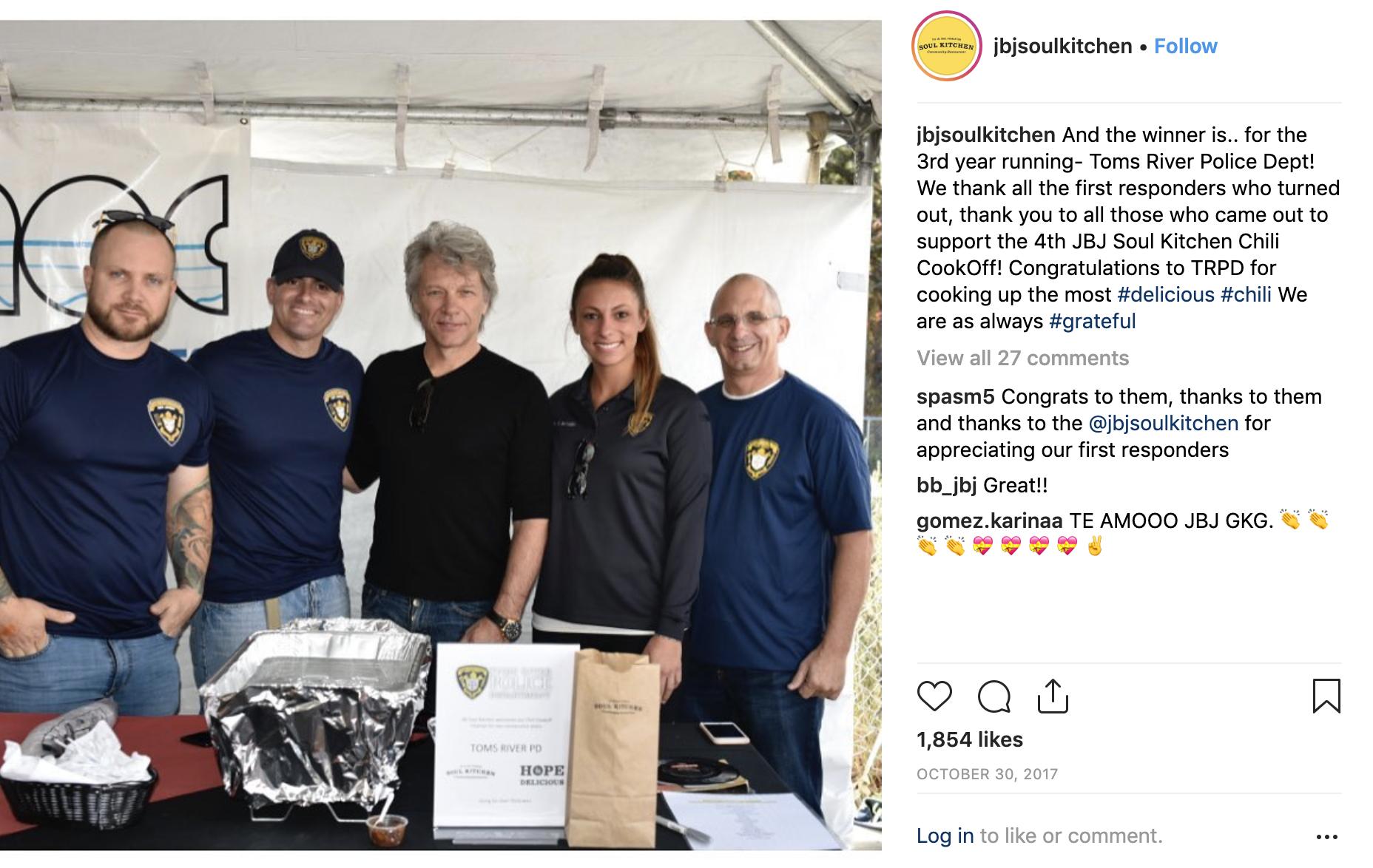 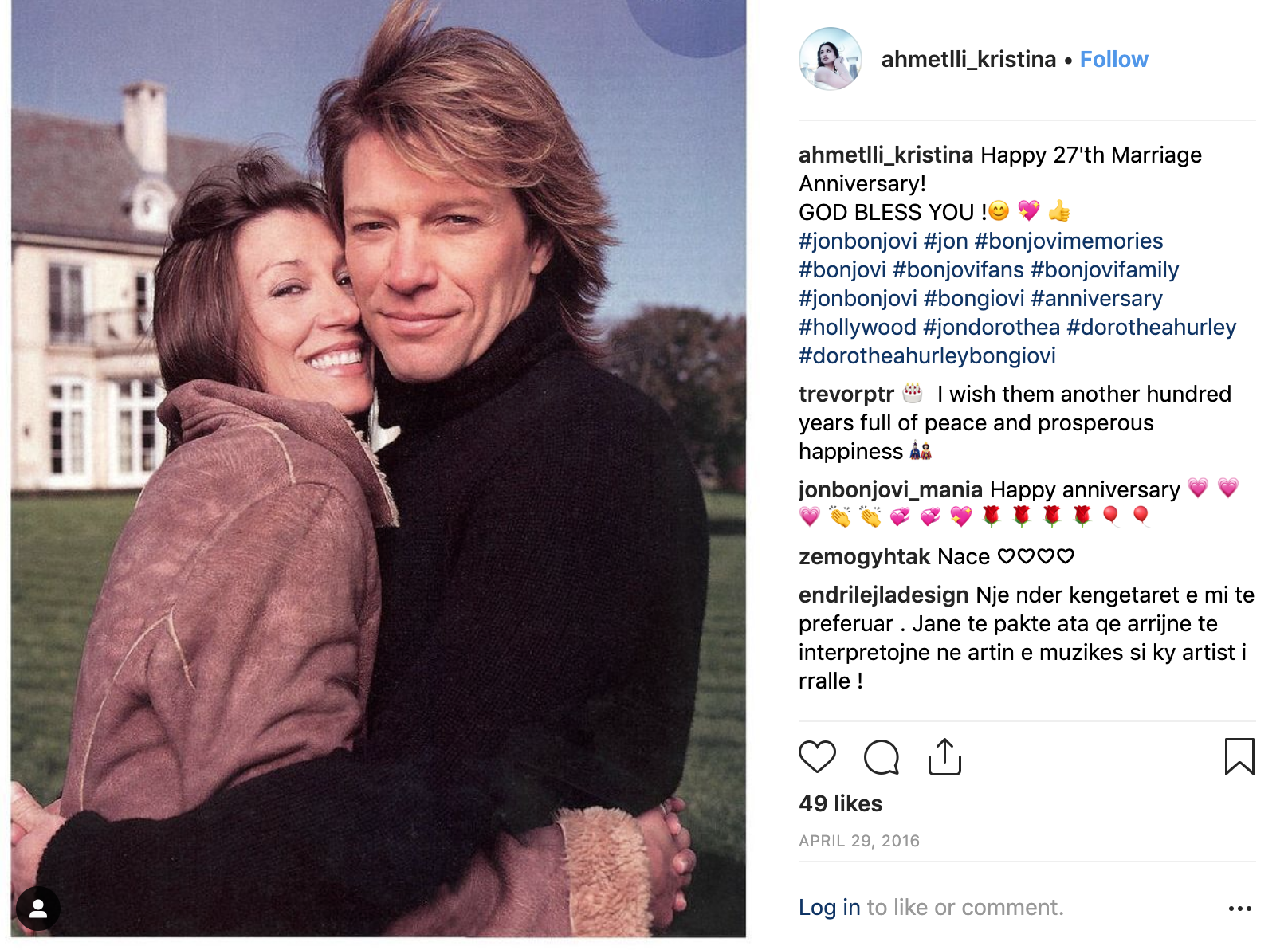 Jon Bon Jovi is about to hit the road again to promote his new album and when it’s time to do so, Dorothea Hurley, his wife, says that she will be there where she's always been during the past 27 years, right by his side. She told PEOPLE that she usually stands on the sidelines when a concert is ongoing and she watches her husband, Bon Jovi perform. She stated that she loves all his music, but when she hears them live, she loves them even more. 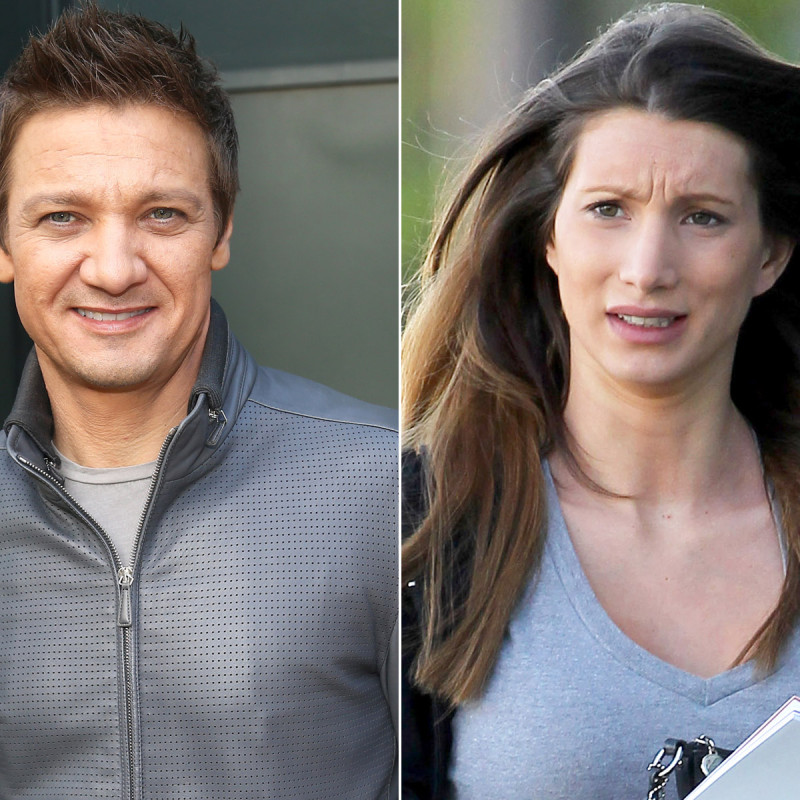 American actor Jeremy Lee Renner was born in 1971. He's an actor who has appeared in independent movies like.. 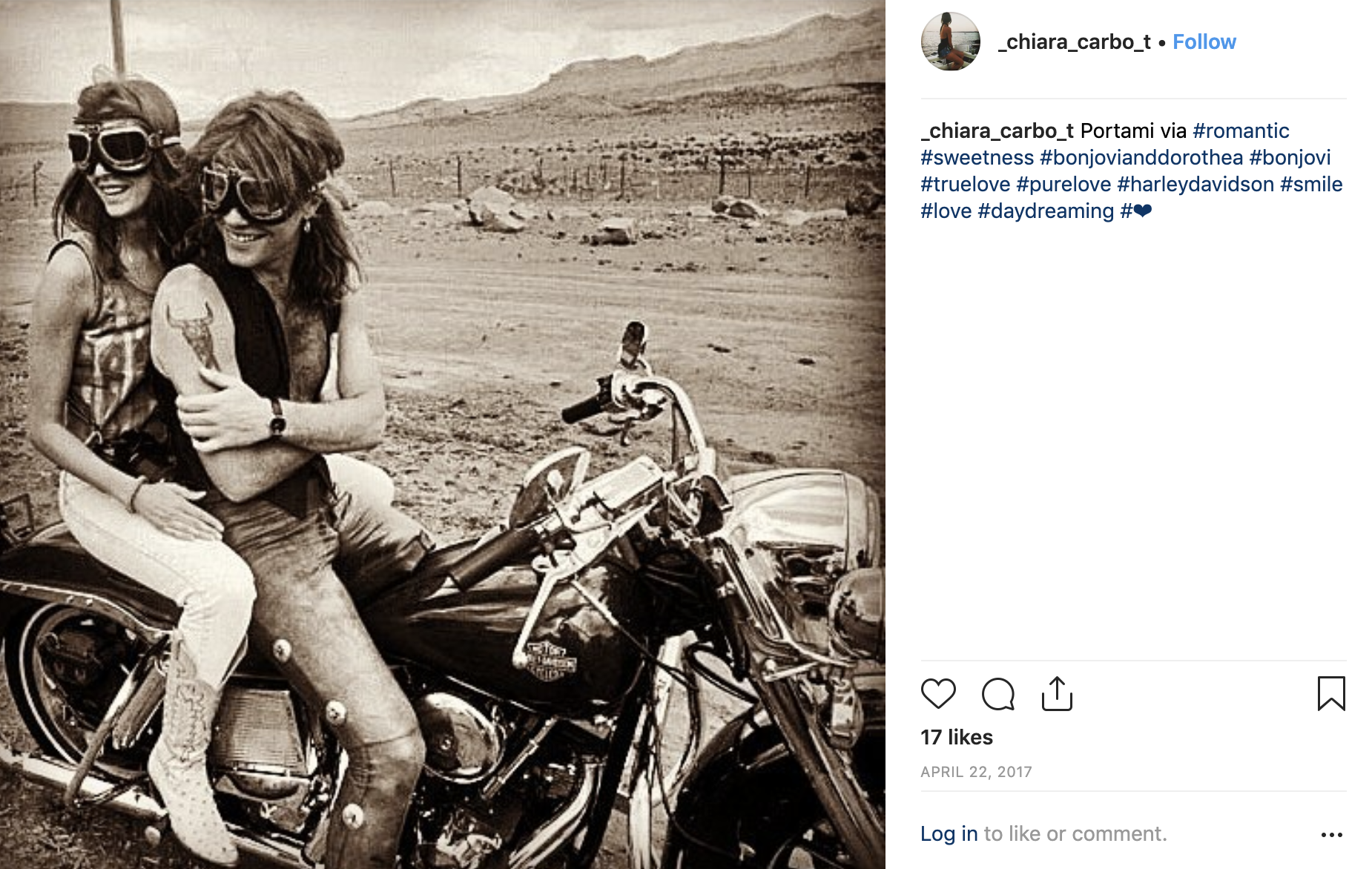 Dorothea Hurley and Jon Bon Jovi met while they were in high school. Like mentioned before and when Bon Jovi was in high school, he met Hurley not knowing that she would one day become the mother of his children and the supportive woman behind his career.Their wedding happened in 1989 and some of the photos of their big day still make headlines, even today. At the time, Jon Bon Jovi was at the peak of his career when their wedding took place. The couple opened up in an interview and spoke about their marriage. They talked about how their marriage managed to withstand raising four children, and tours all over the world. 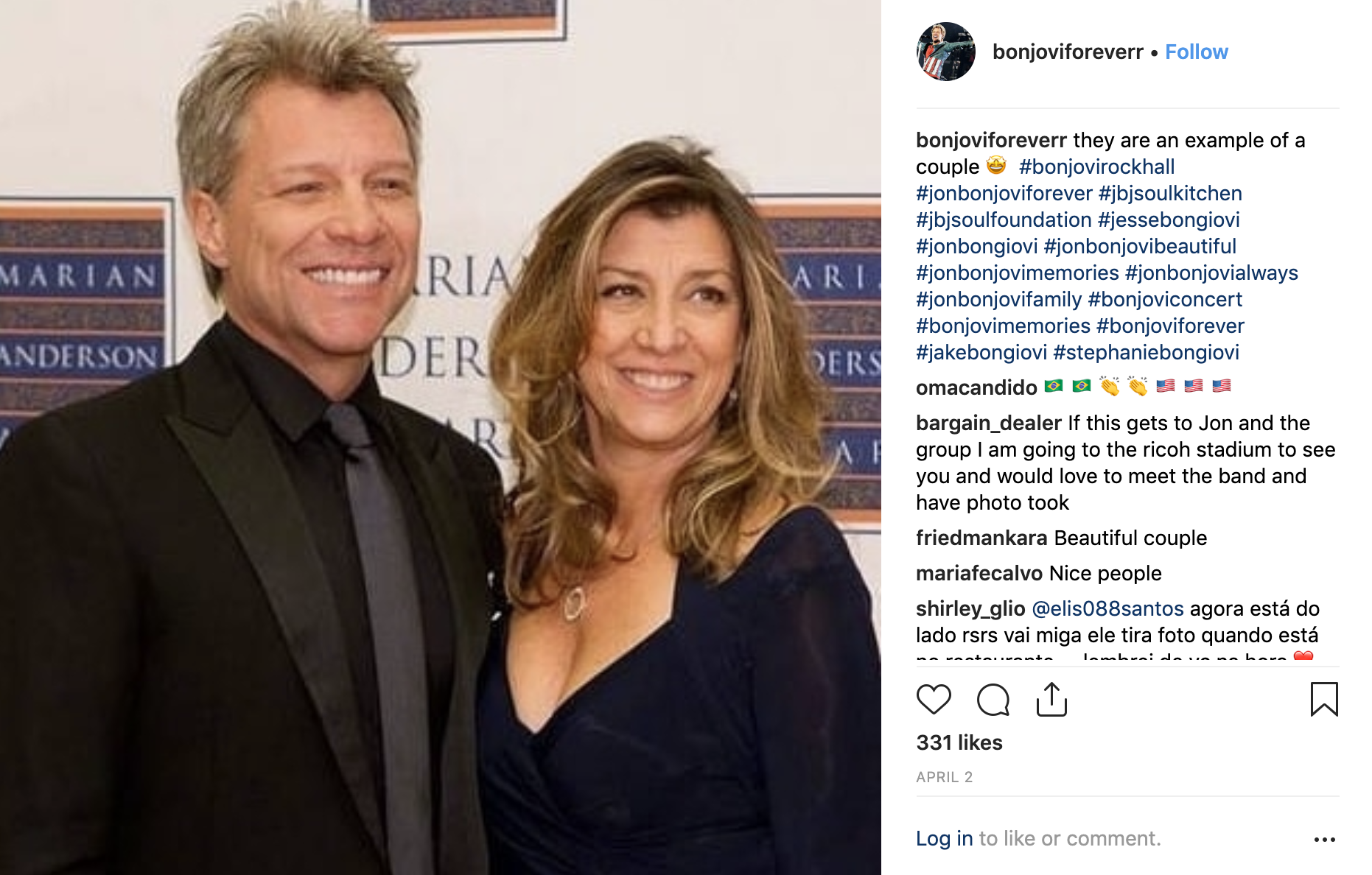 Dorothea Hurley said that somehow it worked for her because both of them grew up at the same rate, equally and not in the opposite directions. Jon Bon Jovi attributed his successful marriage to his wife and he described her as the glue of their marriage. Despite their age difference, they have respect for each other and despite their home wrangles, she still held the marriage together. A successful Hollywood marriage is a hard thing to find and both Bon Jovi and Hurley say they keep Bon Jovi the rock star from Jon the husband and father which helps them stay grounded.

The singer also talked about his onstage persona and said that whenever he is not performing, he uses his last name Bongiovi just like the rest of his family does. The couple celebrates their anniversary every April and they said that they keep Jovi’s career apart from his home life, and that has made things easier for him and his family. Hurley told PEOPLE that he never dragged the children to her husband’s career and they tried to make their childrens' lives as normal as possible.

Jon Bon Jovi: I was in the dark for three years before my wife saved me

After Bon Jovi started falling apart, Jon Bon Jovi was at the lowest moments of his life and the following three years were perhaps the worst of his life. He was heartbroken by the departure of Richie Sambora, his best guitarist, because Sambora had been with the band for over 30 years. Another issue was that he was in a bitter row with his record label and the legend had nothing else than to turn to his wife for comfort. The singer said that there was a lot of darkness and he was going through a difficult period such that he felt like the whole world was resting on his shoulders. Thankfully, there was a one person who didn’t leave him and he could rely on, and that his wife. 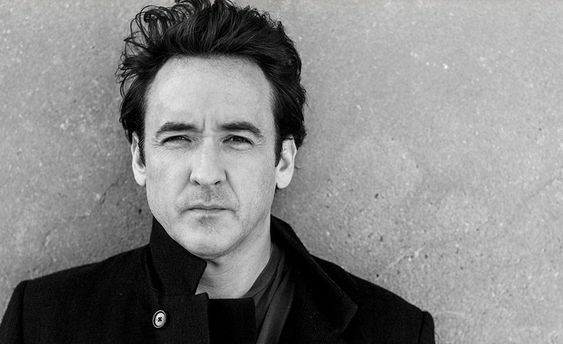 John Paul Cusack is an American motion picture on-screen character who has turned out to be world famous in 1997 after.. 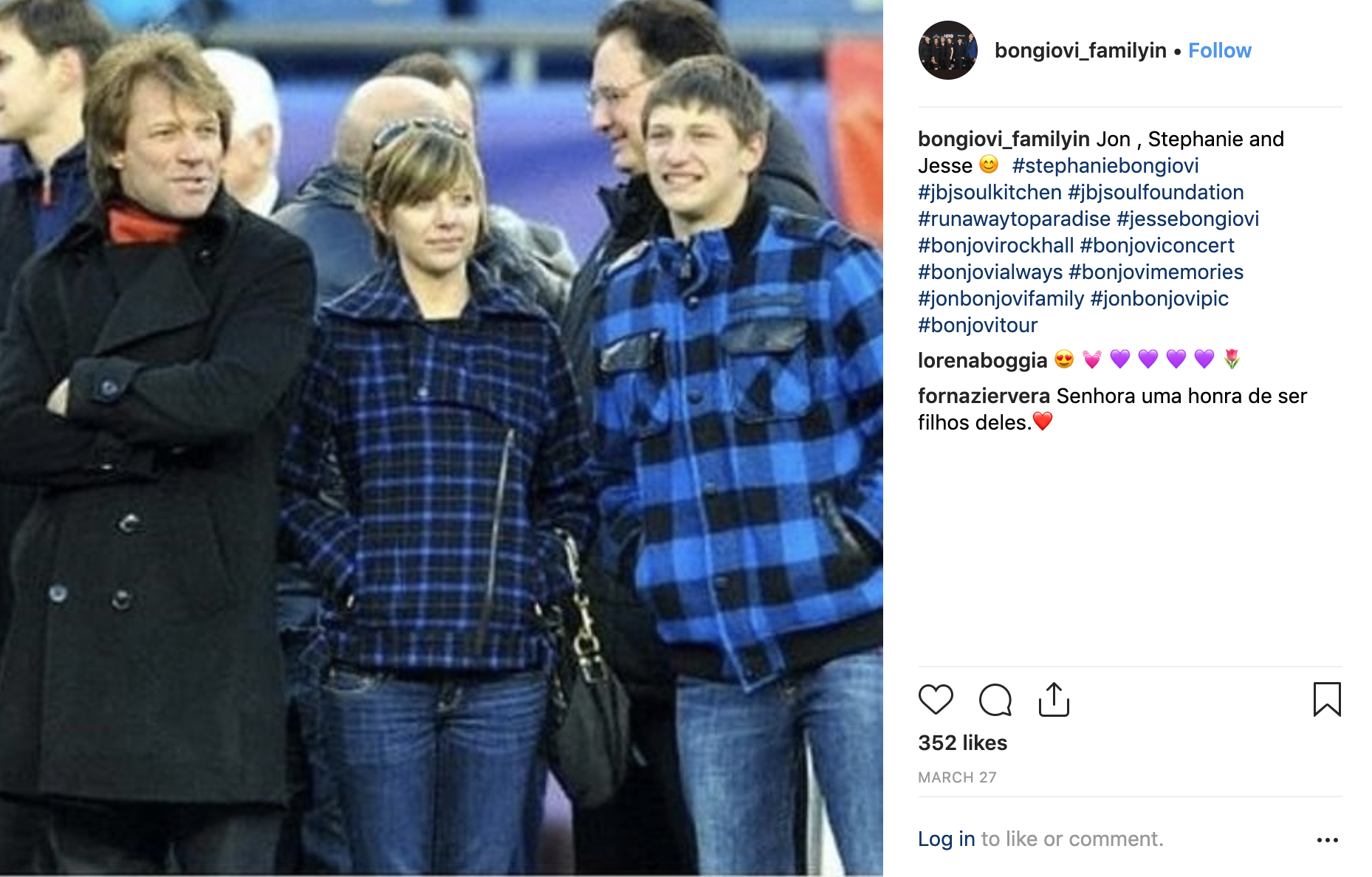 The karate wife was there to support him as he became lonely as Sambora didn’t show back up in 2013. Bon Jovi told The Mirror in an Interview that he went through a lot of difficulties, but his wife was phenomenal stating that with Hurley, Jovi would not have coped. After they launched their third album titled “Slippery When Wet,” which included the song “Livin’ on a Prayer,” the band was exhausted from touring. Jon Bon Jovi had a breakdown and ended up driving on the Pacific Coast Highway on his way to visit a psychologist back in 1991 and he even contemplated jumping out of the car while it moved because of the pain he was in. That begs the question of how bad it became at that time around? 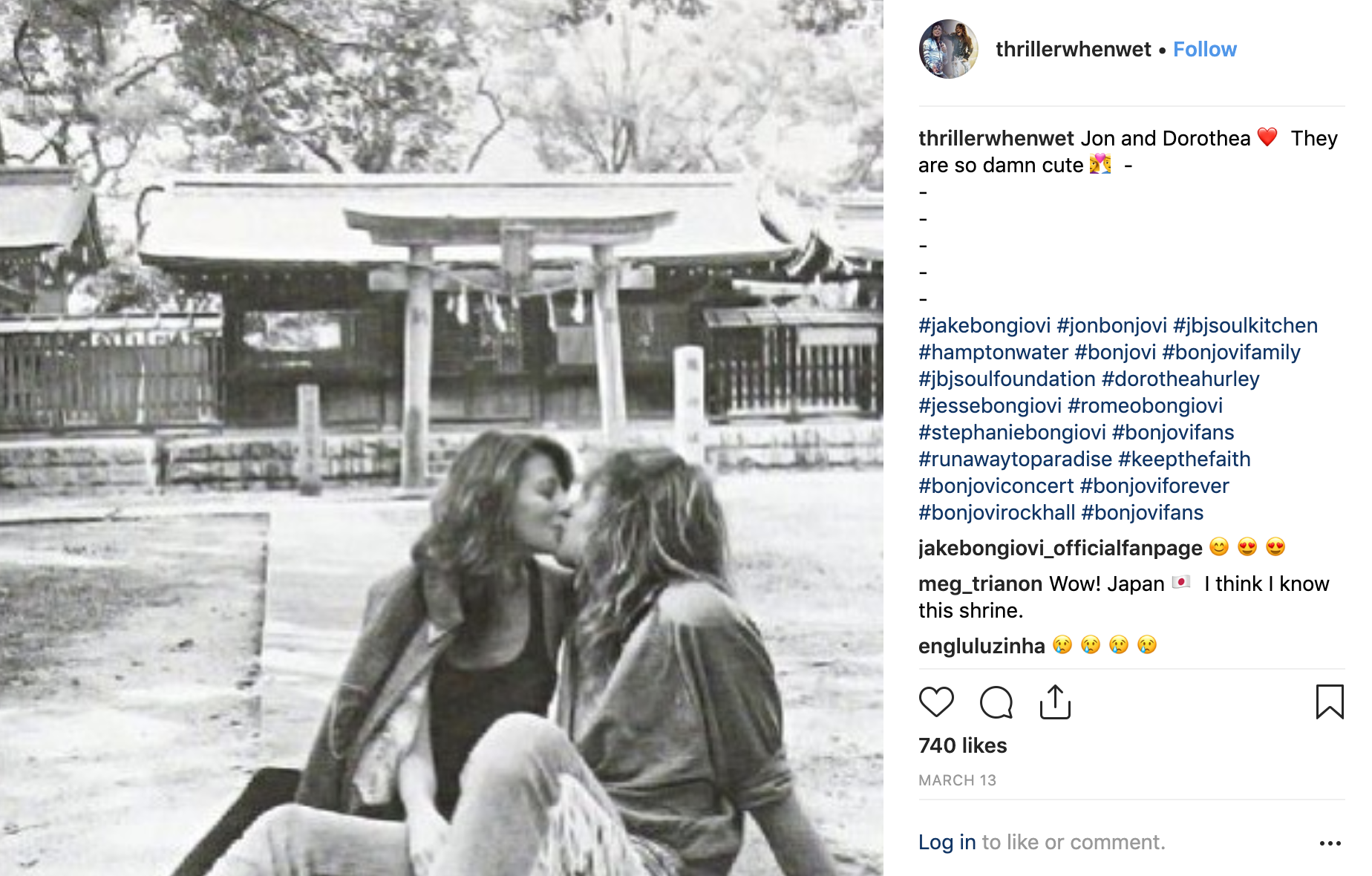 The singer showed some photos of his wedding with his wife and said that it was the happiest moment of his life, but in 1991, things were not pretty and he wasn’t able to talk about them. He was actually working towards getting over it and it was similar to that period in retrospect. Bon Jovi took to acting and it gave him a release which wasn’t available at the moment. The band that Job Bon Jovi led sold over 130 million albums and established itself as one of the greatest bands on earth. One person who has been around in Bon Jovi’s incredible journey is his wife who is a martial arts instructor and they have been stuck together since their wedding. Their photos are a sure proof and they praise one another in their interviews. They have four children together namely, Stephanie, aged 25, Jesse, aged 23, Jacob, aged 16 and Romeo, aged 14. 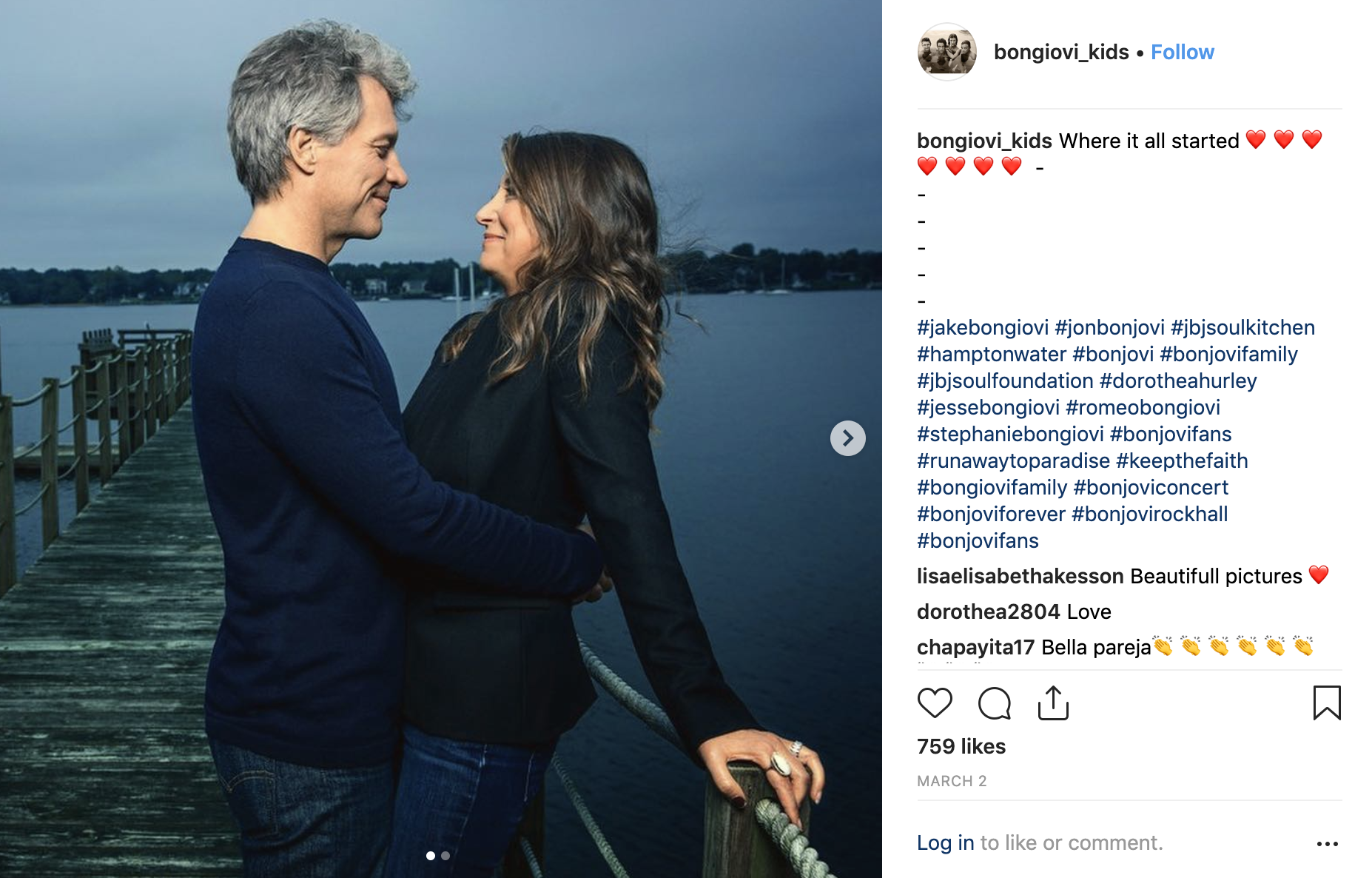 The day of Jovi’s wedding with Hurley

Jon Bon Jovi and his band, which he named after himself never did anything wrong in the 80s except make their audience dance with their music. He broke many girls’ hearts when he married his girlfriend from high school. If they hadn't shared a history class, it would be a different story. Things were not easy for them as they are at the moment. When Jovi was struggling with his music career, he briefly broke up with Hurley for four years before they made up. Jovi revealed in an interview that he went to Hurley’s home and apologized and then asked her to come back with him. She accepted to give him a second chance. He then decided to fly from LA to New Jersey when he was just 27 to marry Hurley and they didn’t even have the rings.

1. Her husband bought a New York City Condo worth $12.87 million

Bon Jovi’s group has sold over 120 million albums all over the world and that increased after he released his new album. Bon Jovi has also worked as an actor and managed to make a net worth of over $300 million dollars, according to 'Celebrity Net Worth.' Even though they have a home estate back in New Jersey, their wealth is enough to afford a home in New York City. In 2015, the New York Post said that he bought a condo in West Village for a whopping $12.87 million. That same year, The New York Daily News reported that Bon Jovi sold his SoHo home for around $37.5 million. He had bought it for $24 million in 2007 and he was trying to sell it since 2013 after listing it as $42 million. 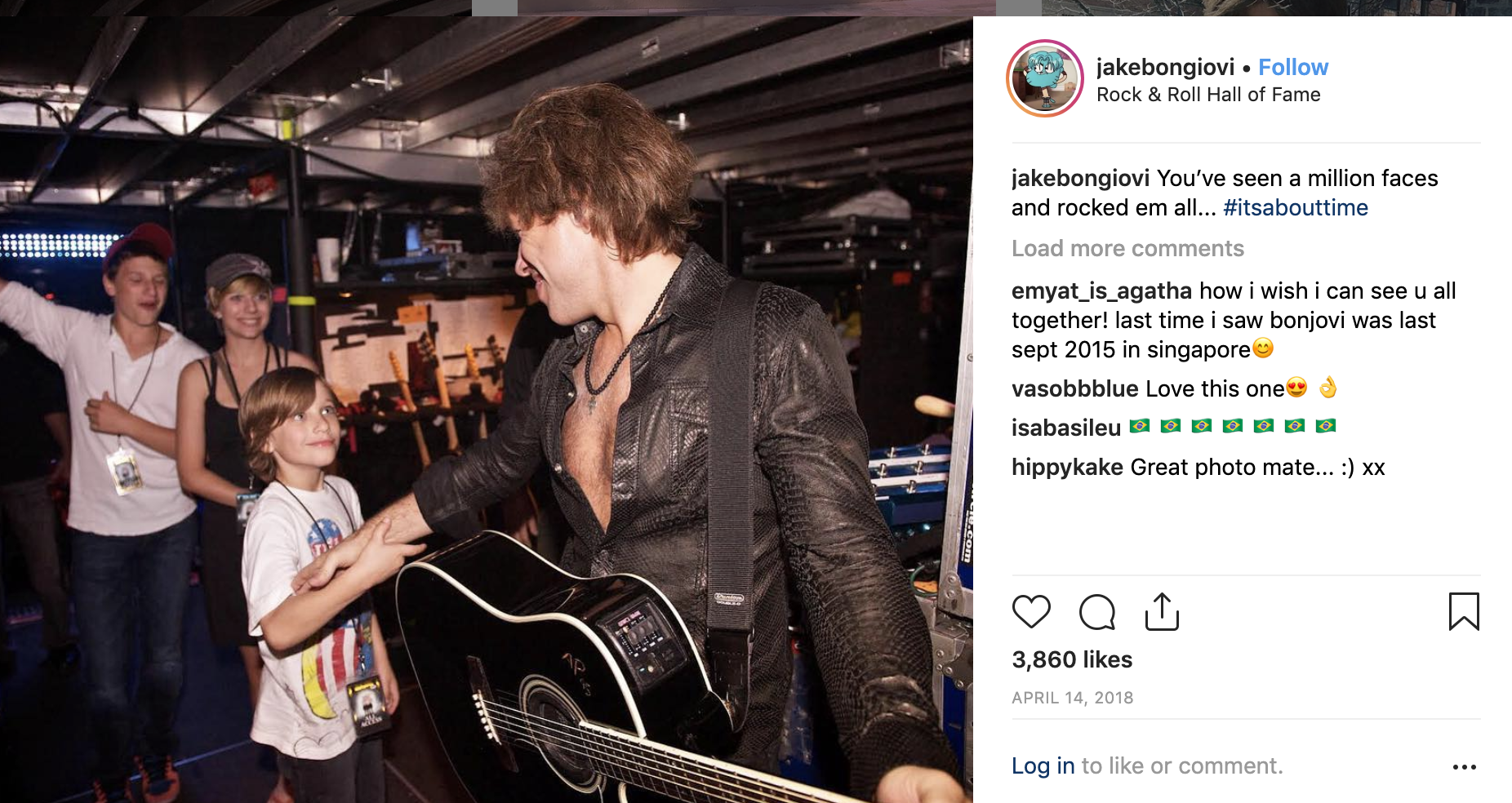 As revealed in PEOPLE magazine in 2002, Hurley is a karate instructor who boasts a fourth-degree black belt. That’s proof enough that she’s independent and she is not needy. Bon Jovi describes her as a strong woman who was wise. She is proof enough that women can be smarter than men and they can take over the world. Bon Jovi said that his instructor wife was incredibly independent and she never affected his work. 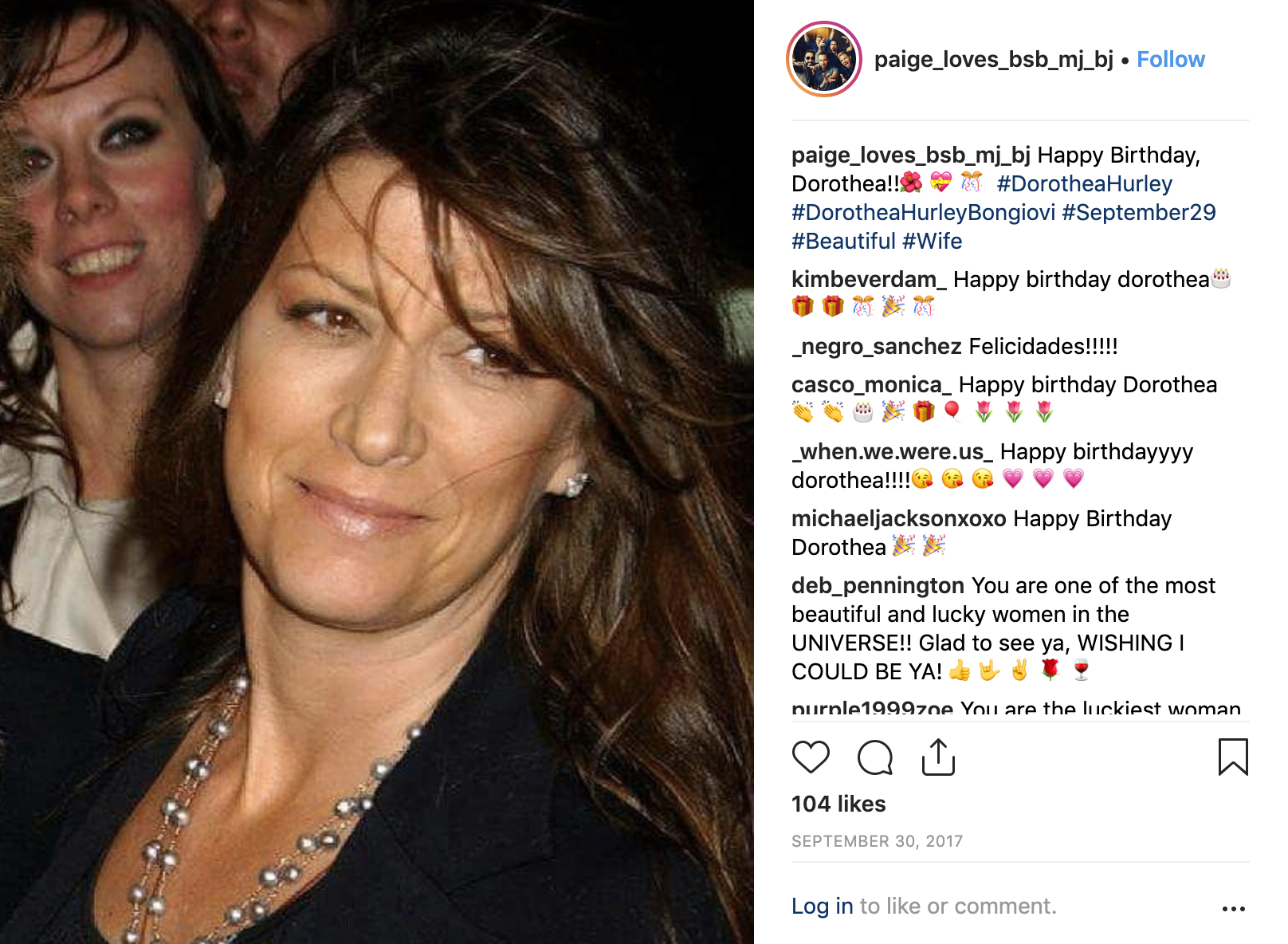 Dorothea Hurley has a net worth, but it’s not clear what amount it is. Her husband, Jon Bon Jovi has a net worth of over $300 million, as reported by Celebrity Net Worth.

Every man hopes that he can have a good woman for a wife, and Bon Jovi is lucky to have Hurley. She has been supportive of all his career and their photos together are impressive. 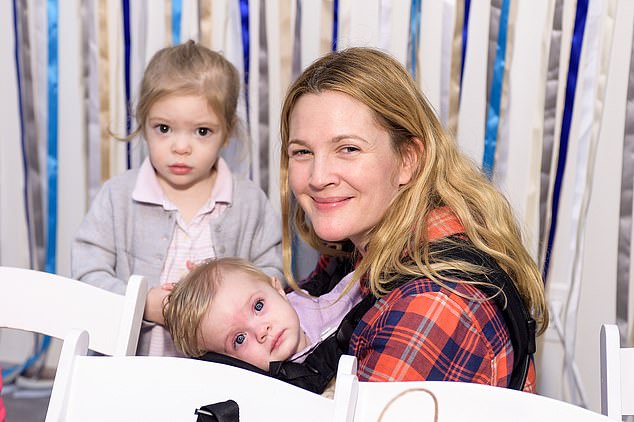 No matter the age at which a woman becomes a mother for the first time, having a first baby stirs up many powerful emotions.