When it comes to announcing the arrival of a new family member you can get as creative as you like. There's a life growing inside of you and that fills you and your partner with joy and of course you want to share it with the world!

You can get creative in social media, have you seen some of the baby announcement being posted there? You have your punny photos where pets and big siblings are involved, they're holding cute signs or T-shirts or balloons to reveal the baby's sex.

Celebrities are no different and they have found very clever, cute and sweet ways to announce their baby news with their fans.

If you want your announcement to be memorable, take a look at how some celebrities did it, maybe you'll get some inspiration. 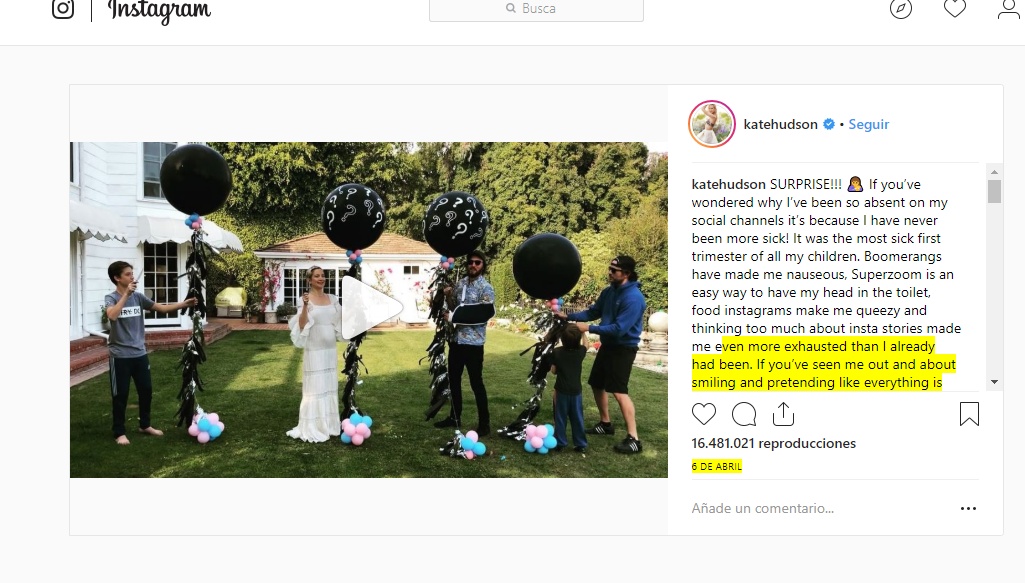 Let's start with Kate Hudson, she just had a baby girl this past October with boyfriend Dany Fujikawa. When she decided to make the announcement back in April, she did it with a very cute and festive video. The whole family gathered, her two sons Bringham and Ryder and the baby girl's father Dany. They pop a bunch of black balloons where the baby's gender was revealed.

She wrote in her Instagram that she is "crazy excited" and as you'll see in the video it totally shows.

This is a very cute way of revealing the great news, don't you think?

How about if you just show up with your baby bump and start rapping? That's what Cardi B did in her Saturday Night Live appearance on April 7. After the show, her manager posted a video on his Instagram account where Cardi was being congratulated.

She kept the pregnancy rumors at bay for a while until the baby bump was obvious and decided to just show up and show it. She is engaged to her baby girl's father, rapper Offset.

So if you're planning on doing the big announcement soon, invite family and friends, take center stage to show your bump and start singing. 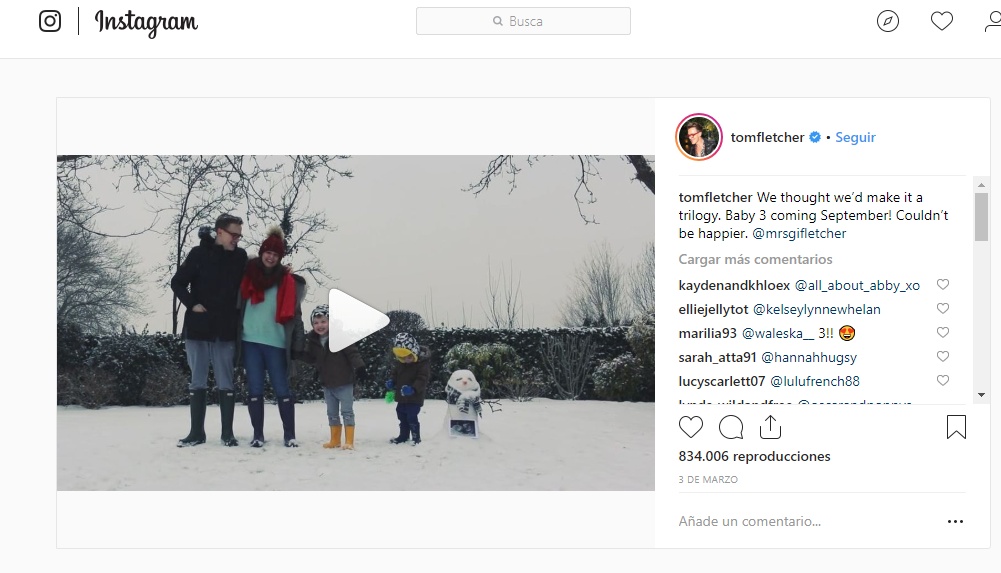 The Fletcher's announcement of baby #3

Want to talk about super cute announcements? Take a look a how the Fletchers did it. Tom Fletcher (McFly) and wife Giovanna decided to keep their tradition of announcing big moments of their lives with super cute and original videos.

They are parents to 3-year-old Buzz and 2-year-old Buddy (don't you just love their names!)  and they started this cute video tradition with Tom's wedding speech and have continued documenting baby #1 and #2 pregnancy and arrival.

So when it was time to announce baby #3 it was no different. This cute and famous family made a video of all of them making a baby snowman (cuteness overload) and with the caption "We thought we'd make it a trilogy". All of this happened on Tom's Instagram account. Their baby arrived in September.

This announcement is such a good inspiration, go outside and help yourselves to some snow, instead of a snowman you can build an angel? 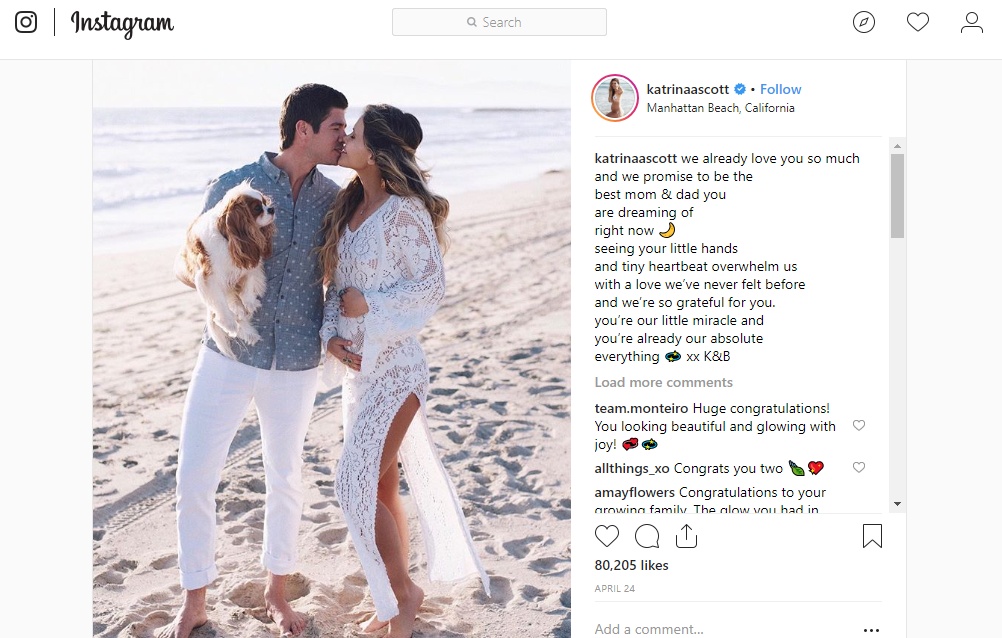 Isn't this a very sweet image? The Founder of Tone it Up, Katrina Scott and husband Brian decided to share their great news on Instagram. They have been married since 2013, and this is their first child. They made the announcement on April and the pics they took to do it are sweet and gorgeous.

They followed this announcement with another one in May where they revealed they were going to have a baby girl. They gathered with family and friends on a boat where they uncorked a bottle of pink Champagne, and of course, she then posted the video on Instagram to share it with the world. The video had a very sweet caption, written by Katrina welcoming her baby girl.

What a great idea, right? Uncorking a bottle of Champagne to announce the arrival of your bundle of joy! Not sure if there are blue bottles of Champagne, but you can get creative there. 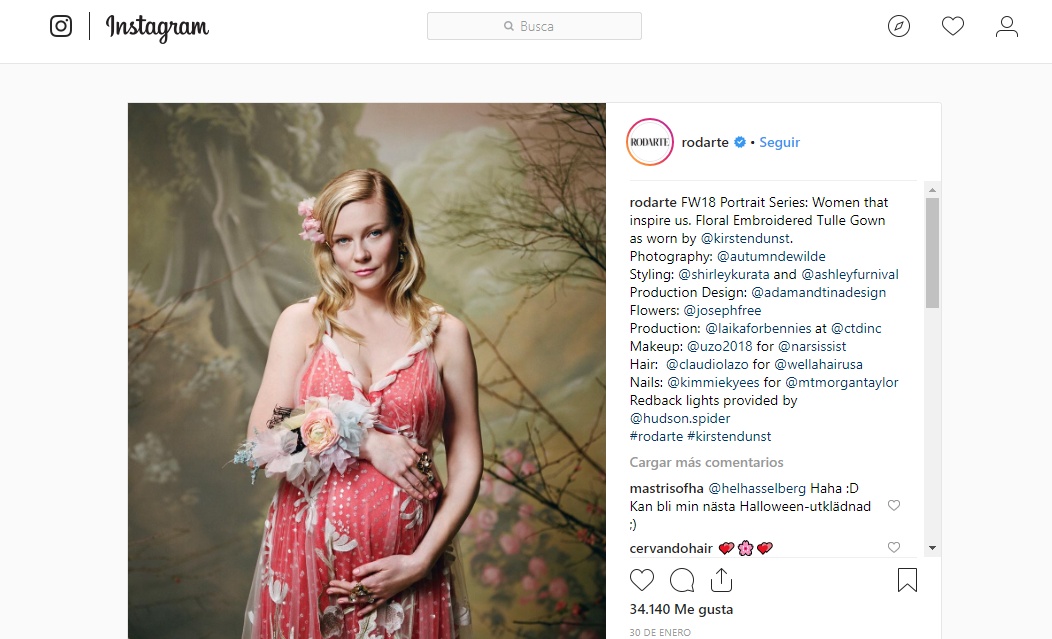 Fashion-centric pregnancy announcements have become a trend among celebrities and actress Kirsten Dunst decide to jump on that trend to make the announcement that she is expecting her first child with fiancee Jesse Plemons.

Kirsten posed with her baby bump for the Fall 2018 Rodarte lookbook. The pics are beautiful and very sweet. They were part a portrait series titled Women Who Inspire Us.

Has this baby announcement inspired you? You don't have to wear a designer dress to make the announcement, but you sure can find something sweet to wear and practice all kinds of poses so the world (well your family and friends) can share your joy. 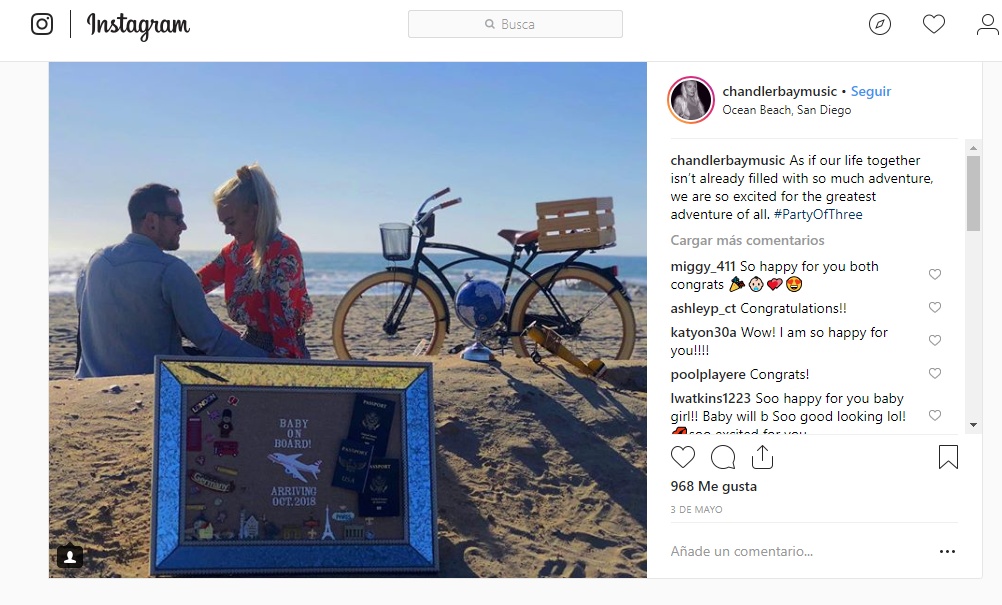 This baby announcement is the definition of sweet! O-Town member Jacob Underwood and his fiancee Chandler Bay announced that they were expecting their first child in October by posting a very sweet image on Chandler's Instagram.

The sweet snap was taken on a beach in San Diego, Jacob's hometown and was accompanied by a very sweet caption and the hashtag of #PartyOfThree. Jacob proposed to Chandler in Paris, under the evening glow of the Eiffel Tower. Very romantic!

The beach could be a great frame to announce your baby bump, it's sweet and romantic and with a little bit of creativity, could be filled with lots of possibilities.

That's a very sweet image of mama Ayesha Curry when she announced that she was pregnant for the third time. It has a funny caption and the part about being very sick is totally true. She had a very difficult third pregnancy.

She made this first announcement on February of this year and despite being sick, she looked really happy to be experiencing motherhood again. She already has 2 girls with NBA player Steph Curry. They welcomed their 3rd child on July 2, a baby boy named Canon.

Cute pregnancy announcements by celebrities who are pregnant with second child

Lots of celebrity mamas are expecting their second child and are very excited to share this news with the world. Check them out in case you have a second baby on the way and are looking to spread the news via social media. 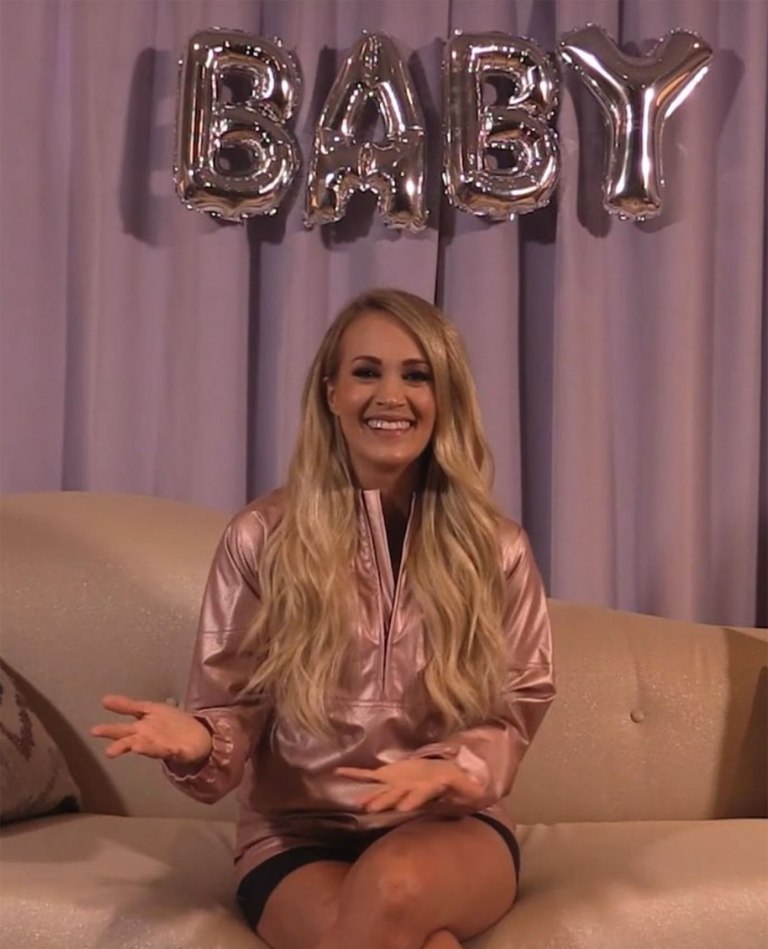 Carrie's announcement of her second child with husband Mike Fisher is totally cute. She decided to make the announcement in a sneaky way, first announcing her upcoming Cry Pretty Tour that she will be promoting until May of 2019.

And why is that? That's when the camera zooms out and you can see balloons spelling the word "baby" The pink jacket and backdrop may also hint to the baby's sex but Carrie and husband are keeping that information a secret.

Do you have extensive news you need to share with family and friends, use that and in between sneak the baby news? Very original and so out of the blue.

This baby announcement is totally cute. Actress Emilie de Ravin, star of Lost and Once Upon a Time announced that she is expecting her second child with fiance Erick Bilitch. They're having a baby boy.

She, of course, used social media to make the announcement posting an image of her holding a positive pregnancy test on her Instagram account with the caption "Coming this fall... Baby boy makes 4! The couple already has a daughter named Vera.

Another great inspiration for announcing a second or first child, be sure to look excited and very happy on the pic, that's what adds the cutesness. 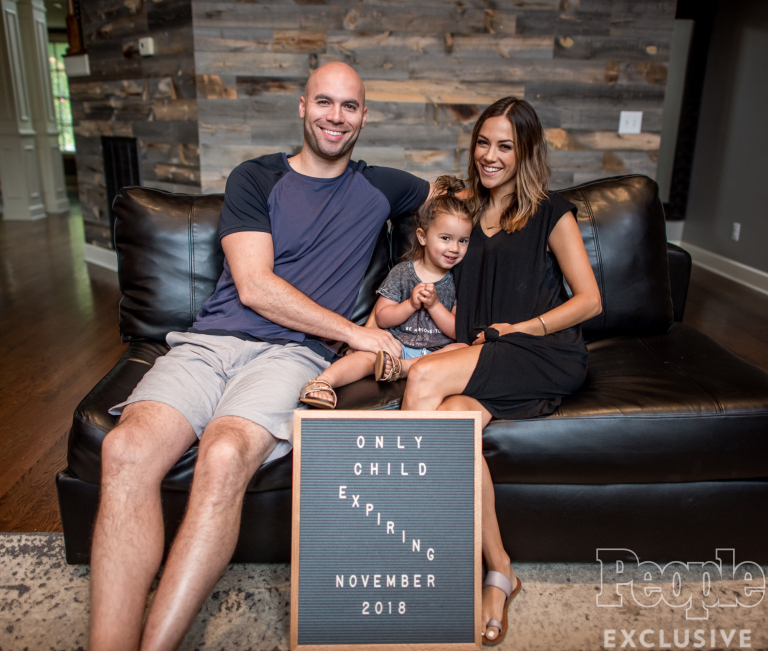 Jana Kramer's second baby announcement is the cutest one. The caption on the board its what gives this pic the special touch and please take a look at the baby's big sister!

After a reconciliation with her husband Mike Caussin, the couple is expecting a baby due any day now. She has had various miscarriages so, as you can imagine and see, she is very happy to finally have a baby on the way. This image made the rounds on Jana's social media.

Think you can make an announcement similar to this one?

These are just a few examples of how celebrities are making their baby news announcement. What did you think? There are some very cute ideas on how to do it and that you definitely can adapt and make it your own.