Getting Started in the Family Business

Both the Gyllenhaal siblings got their start acting in the 1990s with the help of a special connection. Maggie Gyllenhaal appeared in Waterland (1992) and they both appeared in A Dangerous Woman (1993) and Homegrown (1995), all three films directed by their father, Stephen Gyllenhaal. They also got some exposure appearing with their mother on the Italian cooking show, Molto Mario, on the Food Network. They both had a few more supporting roles after that, he in October Sky and she in Riding in Cars With Boys, but it's fitting that they both really got their big break in the same film. The 2001 cult classic, Donnie Darko, starred Jake Gyllenhaal as a psychologically troubled teen trying to decipher doomsday-related visions. Playing his sister? None other than real life sister, Maggie Gyllenhaal, who starred alongside him in the film as Elizabeth Darko.

Jake with Maggie at the #MetGala afterparty last night!

Rising Up Together in Hollywood

Their special bond likely came in handy as they began to find success in movies around the same time, first with their memorable roles together in Donnie Darko and later on separate projects. From prestige work to roles in big summer blockbusters, both Jake and Maggie have had similar career trajectories with roles in several different types of movies and TV shows. Following Brokeback Mountain, for which he was nominated for an Oscar in the Best Supporting Actor category, Jake's resume exploded. From big budget epics like Prince of Persia to dark thrillers like Nightcrawler and the gritty cop drama, End of Watch, Jake continues to be a constant presence on the big screen. Most recently, he starred in the drama, Stronger, about a Boston Marathon survivor named Jeff Bauman, a role which is earning him considerable Oscar buzz. Maggie is keeping just as busy as her brother and in 2008 took over the role of Rachel Dawes in The Dark Knight (where she starred opposite Jake's Brokeback Mountain co-star, Heath Ledger). She's also appeared in everything from children's' films like Nanny McPhee Returns to the Will Ferrell fantasy comedy, Stranger Than Fiction, and an Oscar nominated role in Crazy Heart. Maggie's also appeared in a handful of TV shows including a cameo on Inside Amy Schumer and a starring role opposite James Franco in HBO's The Deuce. Both of the Gyllenhaal siblings occasionally take time off from Hollywood for a role on stage. Jake was in the 2014 Broadway show, Constellations, while Maggie made her Broadway debut the same year in the revival of The Real Thing.

Maggie's birthday is November 16, 1977 and she made her on-screen debut at age of 15 in her father's film, Waterland. She began dating actor and close friend of her brother's, Peter Saarsgard, in 2002 and the two married in 2009. They have two daughters together, Ramona and Gloria, and they live in Brooklyn. Maggie has an estimated net worth of $15 million. Jake's birthday is December 19, 1980 and he got his start acting at the age of 11 as Billy Crystal's son in City Slickers. His parents wouldn't allow him to take a role in The Mighty Ducks the following year because he'd be away from home for too long but he was allowed to take on minor roles throughout the 90s before hitting it big. He has been romantically linked to a number of celebrities including Kirsten Dunst, Reese Witherspoon and Taylor Swift (and her scarf). He has an estimated net worth of $65 million.

Maggie and Jake Gyllenhaal Support One Another 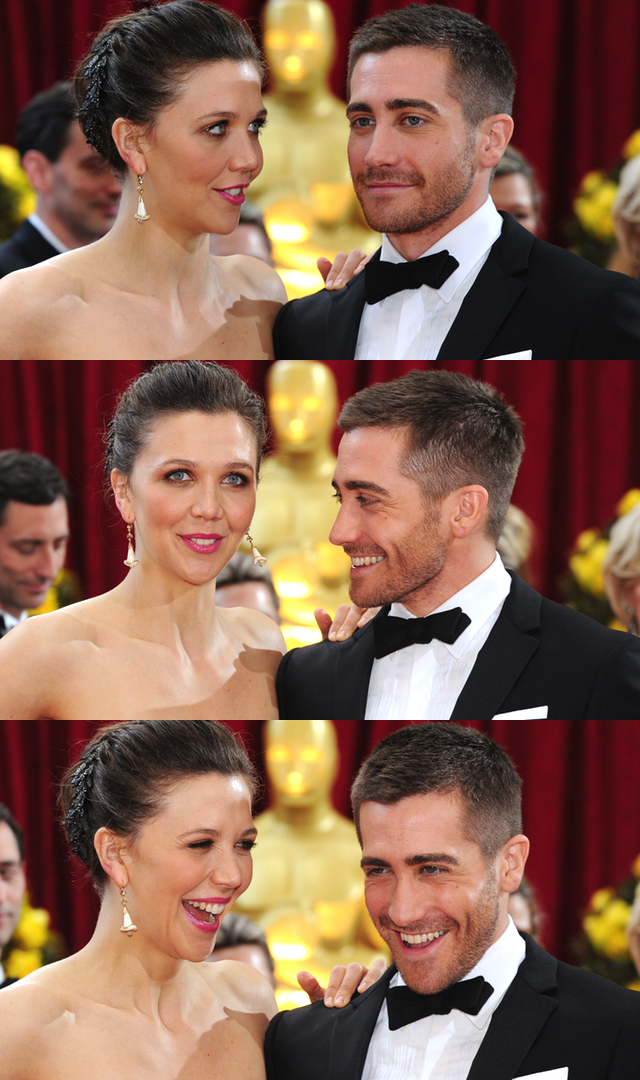 We're all familiar with sibling rivalries full of jabs and jealousy but Jake and Maggie Gyllenhaal have an entirely different type of relationship. They're supportive of one another, clearly excited for one another's success and they consistently show up to stand in the other's corner.

Me and my bro #WomensMarchOnWashington pic.twitter.com/4y1uJ9p1YR

Think it might be a little awkward to attend a movie where your sister plays a secretary engaging in a torrid affair with James Spader? Jake got over it and was at his sister's side at the premiere of Secretary where the two siblings were shown sharing a few inside jokes on the red carpet. Likewise, Maggie wasn't scared off by some of the salacious material in her brother's Oscar nominated film, Brokeback Mountain. Regardless of the film and no matter how famous they get, they continue to be there for one another. Most famously, when they were both nominees at the 2015 Golden Globe Awards, they went as each other's date and Jake was visibly ecstatic to see his big sister take home an award for her role in The Honourable Woman. Maggie clearly appreciated the support and in her acceptance speech said, “I want to thank my brother, who was an amazing date!” When Jake was asked about the two of them going as each other's date, he answered, "I'm happy to be with my sister. In a weird way, I spent my childhood watching her. Looking up to her. It's just wonderful." That seems to be what people love the most about these two, the fact that they clearly respect one another and root for each other. Sure, they're super talented and attractive, with charming personalities and box office success, but there's just something so nice about seeing a brother and sister rise up together and not lose sight of their bond. That's what makes them so great. 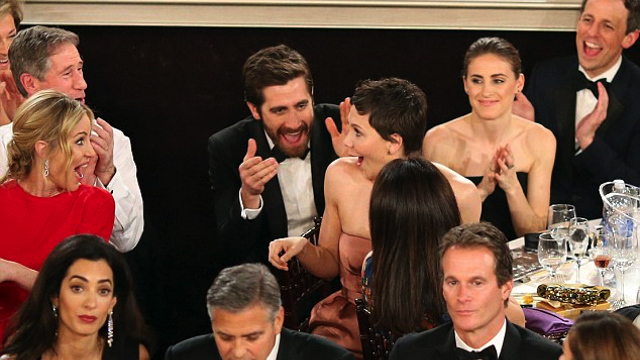