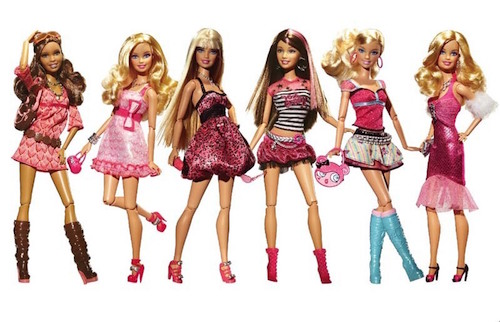 At some point in our lives we all loved dolls, be it Barbies or G.I Joes, they appealed to our imagination in a special way. As kids, we were fascinated by them but as we got to a certain age we lost interest in them completely or were made to understand that playing with dolls wasn’t ‘’cool’’ anymore. Barbie is a household name, it was first launched in 1959 and it was a hit, the first-ever Barbie doll came wearing a zebra-pattern swimsuit and since then the company has sold over 1 billion dolls.

Surprisingly enough there are people who never lost interest in dolls right into adulthood, some even developed a passion for it only as grown-ups. These people collect dolls and view them as valuable treasures, sometimes they believe they have a relationship with their dolls, turning it into a full-blown obsession. This sometimes weird, sometimes artful and sometimes fascinating culture of doll collecting does not come cheap. Some of these pieces are quite expensive and others are a rare find. Barbies are no ordinary dolls, they are the creme de la creme of dolls and have been around for decades with some worth thousands of dollars, so it’s not surprising why someone will want to collect them.

Though society has always looked at dolls as a thing for little girls to play with, dolls have recently evolved into a collectible. Like luxury cars, stamps or baseball cards, more and more people are getting into the hobby of collecting Barbie dolls. Meet the people behind some of the largest collections of Barbie dolls in the world. Three of them are men, all from different backgrounds and across different continents but their obsession with Barbie dolls is on a whole new level.

The largest Barbie collection (owe by a lady!) 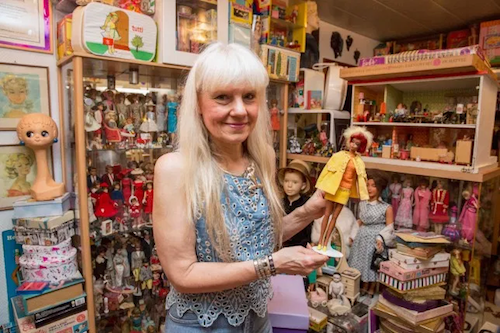 Bettina Dorfman is a 58-year-old Barbie enthusiast from Germany, she holds the Guinness Book of Records title of the world’s largest Barbie collection. Bettina owns over 17,000 dolls, worth more than £200,000. She has a special room in her house for her most treasured dolls and the rest find refuge in her basement. In addition to being a collector, Bettina also runs a Barbie hospital, YES! You heard right. She considers herself somewhat of a Barbie doctor, repairing broken dolls from all over the world in her kitchen.

Her obsession with Barbies started when she was just 10 and has grown today to include some very expensive limited edition dolls. Her collection boasts of classic dolls like a Barbie from 1968, worth around $1,000, replicas of Marilyn Monroe, Sandy from Grease, Twiggy and other super pricey Barbies. Bettina’s dream is to grow her collection even further and leave all her dolls to her daughter to continue with her legacy when she’s gone.

The 3 Barbie Mens Who Have Thousands of Barbies 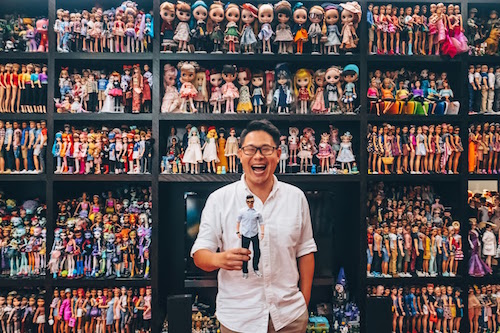 Meet Jian Yang a 33-year-old Singaporean doll collector, when you look at him, he’s as normal as it gets, none of the usual eccentricities you’d expect from someone with such an obsession. Yang is the director of strategy for a Media Group called Omnicom, which also gives him a professional interest in consumer trends. He displays his 9000 Barbies and 3,000 other dolls and figurines in his minimalist decor living room and study. Yang says he started collecting dolls when he was 13-years-old and as the saying goes, you never forget your first. The first doll he bought was the “Great Shape” model dressed in a turquoise Spandex gym outfit and striped leg warmers and since then it has been uphill.

Yang told Reuters in an interview that his interest for Barbies began when he was very young and saw them on TV but the social norms at the time made it inappropriate for a little boy to play with dolls, so he had to wait until he became a teenager and had an allowance to buy whatever he wanted. 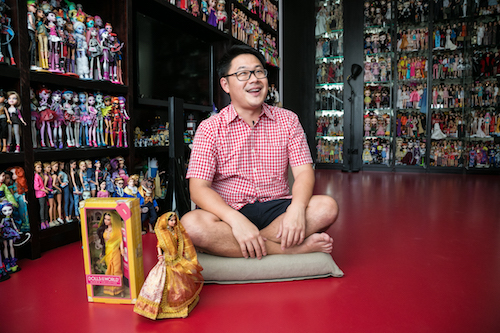 He considers himself a ‘’toy nerd’’ instead of an obsessed doll collector, he has spent roughly $392,000 on dolls since he started his collection 20 years ago. Some of his dolls date back to the 1960s with the highlights of his collection being lookalikes of public figures such as Elizabeth Taylor, Lady Diana, Jackie Onassis, Grace Kelly, James Bond, Elvis Presley, Harry Potter, etc. The rarest piece in his collection is a model sold exclusively by ‘’Comme des Garcons’’ fashion label a friend of his found in Hong Kong. He’s also a huge fan of Barbies from Jem, Bratz Girls, Star Trek, and  Monster High lines.

As someone who travels a lot for work and leisure, Yang's Barbies are from all over the globe, when he visits places like New York he makes it a priority to shop for dolls for his collection. He buys some online and others at auctions, one never knows what they might find. His family and friends have come to accept his obsession as a weird reality in his life, however, the women he dates are not always that accepting. But this does not bother Yang as he intends to expand his collection as much as he can and as long as he has space for them. 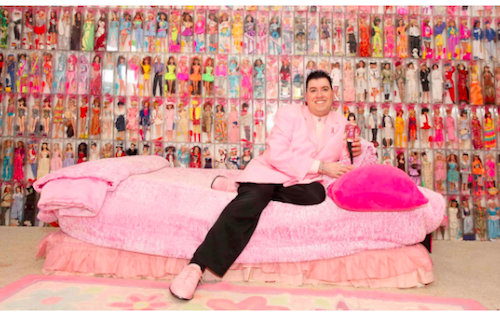 A self-proclaimed ‘Barbie Man’ Stanley Colorite owns 2,000 Barbies and 1,000 Kens, this 41-year-old has been collecting dolls for two decades and spends about  $30,000 a year on new finds. His dolls occupy four of the seven bedrooms in his Florida home. Stanley Colorite, also has 3,000 Barbie outfits, including a design by popular fashion designer Oscar de la Renta. He buys his dolls online through eBay and at jumble sales, his most expensive doll is worth $1,000 and is called Pink Splendor. It is displayed in a glass case in one of his rooms along with other rare pieces, he also has Barbie mouthwash, toothbrush, Barbie's vehicles, a Dream House, and other accessories worth a fortune. He says his first Barbie was a Happy Holiday doll, he bought back in 1997 and since then he never stopped. 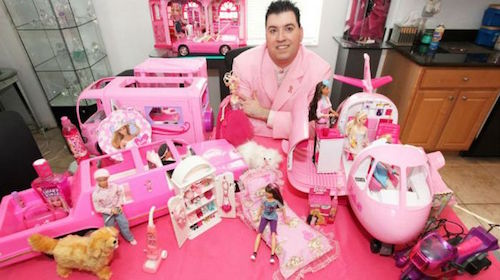 Stanley Colorite also designs Barbies for charity, he lives with his partner Dennis Schlicker who owns 1,000 Ken dolls, which is every edition ever made in the U.S. In their spare time, the couple enjoys visiting Barbie conventions together and they enjoy curling their dolls' hair. Barbie Man says his favorite doll of his collection is a 1992 beauty worth $975. He also has a doll from 1962 which is the oldest in his extensive collection, from the looks of it, Colorite is just getting started, as he plans to fill his seven-bedroom house with Barbie dolls in the coming years. 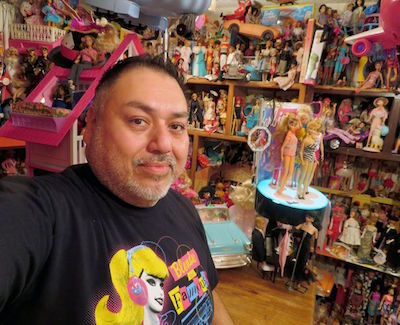 Sam Pena a 45-year-old man from Sacramento, California, has over 5,000 dolls. He has been amassing them for 20 years and has spent a four-figure sum on them even though he says he doesn’t keep tabs on how much he spends on his precious dolls. He also has a collection of Ken dolls, playsets, doll outfits, and Barbie houses, plus an entire room in his house has been dedicated to his 5,000 Barbies. Sam says his love story with Barbie began in the mid-’70s when his mum bought his sister a 1962 Bubblecut Barbie from a charity shop. But he didn’t act on his fascination until 1992 when he was 19-years-old and stumbled on his sister's old doll, he was hooked and since then he has been collecting them. 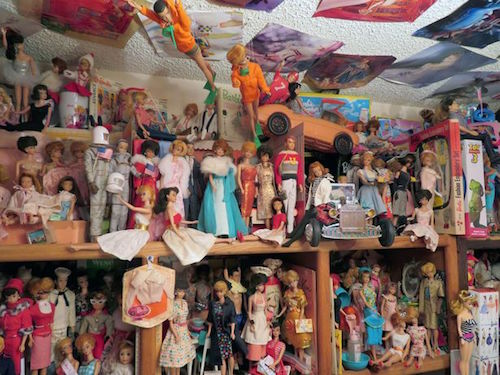 Sam is very proud of his collection and displays them in their different eras without mixing them. His family and friends are intrigued by this obsession of his but he also has friends who share his passion. Sam, has a regular job as a librarian and for him collecting Barbie dolls is not different from collecting cars. This middle-aged man spends his spare time searching for more dolls to add to his collection, he goes to auctions, charity shops, car boot sales, and online to ensure that he lays his hands on every doll out there.

Despite being a collector for over two decades, Sam’s all-time favorite doll still remains the 1962 Bubblecut Barbie he started with. He believes it’s of great sentimental value because it is the doll that made him fall in love with Barbie and launched his obsession. He has a preference for second-hand dolls so he doesn’t really buy new ones off the shelf. According to Sam he has dedicated his life to his collection and intends to keep growing it.

Related Article: Meet the 5 Women Who Want and Looks Like a Real Life Barbie Doll 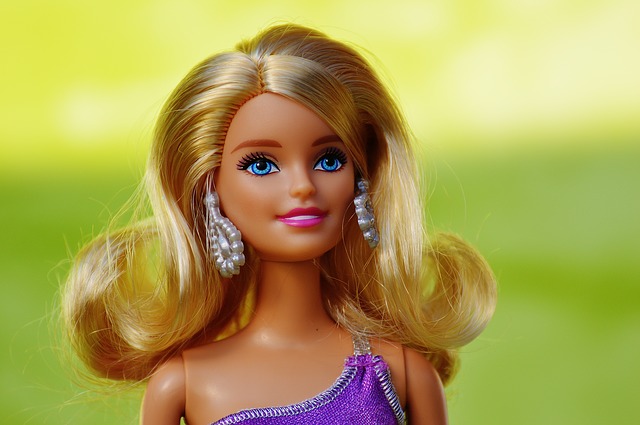 How do human barbie dolls fare in looking like the doll Barbie? 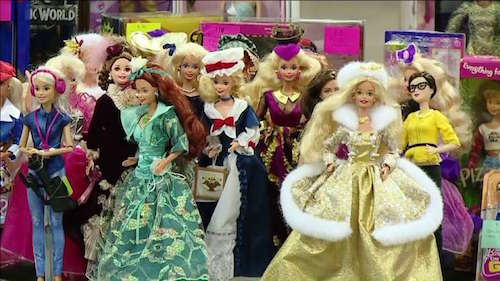 Though some people may find it weird, doll collecting is fast becoming a subculture, there are lots of collectors out there, maybe not with huge collections like the ones we saw above but still worthy of mention. The are many collectors clubs out there not just for Barbies but for other genres like action figurines, superhero dolls, sex dolls, robot dolls and so much more. So, have you ever owned a Barbie or better still are you considering starting your own personal collection?