Elaine Regina Taylor was born on the 17th October 1943 in Hertfordshire, England. Taylor acted in many films and was a Bond Girl in Casino Royale. Her comedy films during the late 1960s and the early 1970s helped her gain popularity. Frances, Taylor’s mother, insisted that she learn to dance. In 1950, very early in her career, Raymond Bessone famously styled her hair for ‘Will O’the Wisp’. Taylor studied at the Italia Conti Academy of Theatre Arts. She also enrolled at the London Festival Ballet later.

Prior to Elaine Taylor, Christopher Plummer was married to actress Tammy Grimes and then journalist Patricia Lewis. After two failed marriages, Christopher Plummer was third time lucky with Elaine Taylor. Taylor stood by him through thick and thin. Taylor was able to bring out the best of him and calm him down throughout the years. Acknowledging her influence on Plummer’s life, he said himself that Elaine Taylor is the perfect mix of a cook and a nurse. She is a gourmet French cook, which is no small feat! Plummer has said that Taylor has been a dutiful wife and she has taken care of the terrible old man very well. They had a small and private wedding and celebrated their wedding by enjoying a quiet lunch at Ritz all by themselves.

They both met while filming Lock Up Your Daughters in the year 1969. Taylor colored her hair red for the film. Elaine Taylor's red hair did the trick as it is believed that Plummer falls for red-haired ladies. When Taylor wrapped up her shooting schedule and was packing her bags to go back to London, Christopher Plummer said that he will miss her terribly and that he wished to see her soon in London. Hearing this, Taylor said she was ready to meet him only if he was ready to cut down his booze intake. They started dating each other the very same year, but their marriage took place in Montreal, Quebec on October 2nd, 1970. Toby Johnson, Christopher Plummer’s childhood friend, was his best man and Johnson’s wife Alice was the bridesmaid for Elaine Taylor. The thirteen year age gap between them was never a hindrance in their married life. They are still in love and the secret behind this is that they never had an ugly fight. They always managed to have a hearty laugh at the end of a heated argument and that has helped them in maintaining such a lasting relationship.

Though they met through a film and fell in love on set, that’s not the only thing that they had in common. As a matter of fact, they have a knack for interior designing. They now own a 100-year-old farmhouse with the interior completely been done by them according to their taste. Christopher Plummer is an architect himself and Elaine Taylor is an interior designer. Both of them joined forces to renovate their home so that their present home is in an old English Manor style and has 25 acres of land around it. 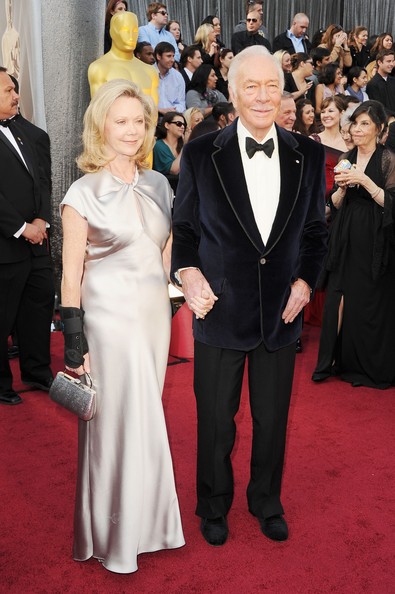 #MovieoftheDay: Half a Sixpence (1967) "Half a sixpence Is better than half a penny; Is better than half a farthing; Is better than none. It’s a token of Our eternal love; When you’re far away, Touch it everyday! And, though, that half a sixpence Can only mean half a romance, Remember that half a romance Is better than none. But when I’m with you, One and one make two, And likewise, two half sixpences Joined together make one..." BAFTA nominee for Best British Costume Design (Colour). #HalfaSixpence #GeorgeSidney #TommySteele #CyrilRitchard #JuliaFoster #DavidHeneker #HGWells #Kipps #musical #musicalfilm #60scinema

She was popular for her films like Casino Royale, The Anniversary, and Half a Sixpence. In Half a Sixpence she acted opposite Tommy Steele. Taylor’s other films include comedy film Diamond for Breakfast, where she took on the role of Victoria Ponsonby. This film also starred Marcello Mastroianni. The Anniversary was a black comedy film where she played the role of pregnant fiancée, Shirley Blair. In 1970 she appeared in two films, one being ‘The Game’ directed by Michael Winner and the other one the comedy film ‘All the Way Up’ directed by Warren Mitchell. In 1980, she returned to her old love, television, through ‘The George McKenna Story’ and ‘Sharing Richard’. She also co-produced a film known as ‘Love Potion’ in the year 1987. Her last stint in television is considered to be the TV film named ‘Till Death Us Do Part’. Elaine Taylor started her career in 1960 through television shows like The Benny Hill Show, The Lance Pervical Show, The Old Campaigner, and Mr. Rose.

5. Plummer’s confession about his actress wife

Christopher Plummer, in his speech after winning the Oscar, said that Elaine Taylor, his wife, should be granted a Nobel Peace Prize for putting up with him and rescuing him every day from his own miseries. Elaine Taylor is not just Christopher Plummer’s wife, but she is also an actress, producer, dancer, gourmet cook, and an interior decorator. They worked together in renovating and designing houses in London and West Hollywood before settling down in their 100-year-old renovated farmhouse in Connecticut.