Thanks to The Force Awakens director J.J. Abrams, Daisy Ridley, currently aged 25 (born April 10, 1992), went from acting in short films and obscure British television shows to being the lead in a Star Wars film at the tender age of 23. Before being cast as Rey in Star Wars: The Force Awakens, Ridley starred in five short films,one of which was oddly called "100% Beef". She also snagged a part in Scrawl, a supernatural horror about two friends who rewrite a comic book to avoid a treacherous fate. The tagline was, "Death cannot be rewritten." Her television credits prior to fame include Casualty, a medical drama, as well as Youngers (dramedy), Silent Witness (crime drama), Mr. Selfridge (period drama) and Toast of London (comedy). Abrams famously warned Ridley to be aware of what accepting a lead role in Star Wars would mean for her. "This is not a role in a movie," he told her. "This is a religion for people. It changes things on a level that is inconceivable." 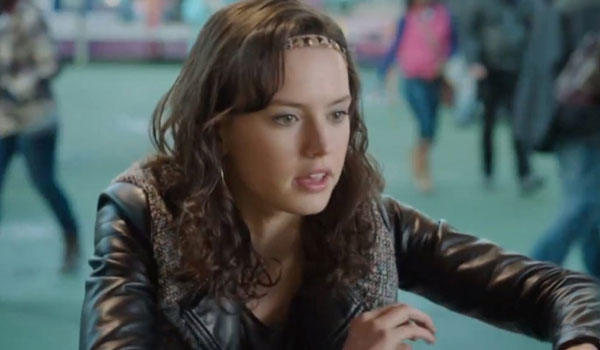 Her Character In Star Wars Originally Had A Very Different Name

While shooting in Abu Dhabi, J.J. Abrams unexpectedly told Ridley that he was thinking of changing her name from "Keera" to "Rey." In a V Magazine interview, Ridley said she thought Rey was a "frickin’ awesome" name as soon as she heard it. Keera might have been a strange choice since Ridley is often compared to fellow Star Wars alumnus Keira Knightley, who played Natalie Portman's decoy in Star Wars Episode I: The Phantom Menace. In a very early version of the script, the name was spelled "Kira," a character that seems destined to end up in the Star Wars universe. Kira is currently the rumored name of the female protagonist in the Ron Howard-directed Solo: A Star Wars Story starring none other than the Queen of Dragons, Emilia Clarke.

I don't care what anyone says, i absolutely am in love with this outfit. (P.s. it's the addition of the poncho that really gets me)

The 25 year old actress, along with co-star/fellow up-and-comer John Boyega, earned a criminally low paycheck for their work in Disney's first Star Wars revival. Variety estimates that she Boyega and took home somewhere between $100,000 and $300,000 for the film. This is especially shocking since The Force Awakens is listed as the fastest-grossing film of all time. While her paycheck for The Last Jedi hasn't been revealed yet, it's probably safe to assume that she'll be taking home a hell of a lot more than $300,000. Her current net worth is approximately $2 million. Not bad at all for someone who's still in their 20s, and that number that will surely rise after she's completed more projects. Ridley is currently $4 million behind Mark Hamill and $208 million to go to match Harrison Ford's net worth (who, to be fair, has been acting since 1966).

She's Not A Fan Of Social Media, Especially Instagram

Daisy is currently only active on Facebook, and there's a good reason for that. After posting in favor of gun control on Instagram, Ridley reportedly received so much backlash that she chose to deactivate her official account.

As I sat in the audience yesterday tears were streaming down my face at the tribute to those that have been lost to gun violence. I didn’t get a great picture of the incredible group that came on stage but they were so brave. It was a true moment of togetherness. We must ‪#‎stoptheviolence‬ 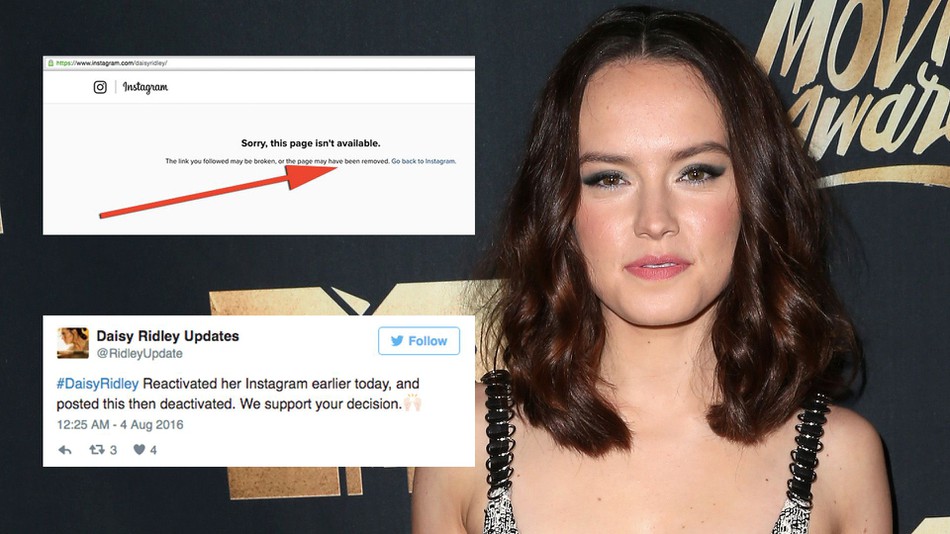 John Boyega responded to the controversy simply by saying, “She’s doing what’s best for her," and added that he had no interest in convincing her to rejoin. Daisy later told fans that she wanted to be "more present" and spend less time on her phone.

The Last Jedi Will Finally Reveal Who Rey's Parents Are

The latest Star Wars film could be a turning point for fans due to Rey's lineage finally being revealed. Many think it would be cheap and obvious for her to merely be a Skywalker or Solo descendant. There are also theories that Rey is Anakin or Obi-Wan reincarnated but I'd almost find a relation to Yoda more believable. The preferred theory seems to be that she's Obi-Wan's granddaughter. This one is not too obvious but still keeps her tied to the original characters.

We miss you Carrie. 💝

Whatever the answer, I just hope that the moment everyone finds out is an enjoyable experience for viewers. And, though I have known the answer for several years now, the series that Rian Johnson created has turned out to be spectacular beyond even my imagination. To be honest, I was very moved. I think it will be a moving moment for everyone else as well.

She Got Her First Tattoo At 15 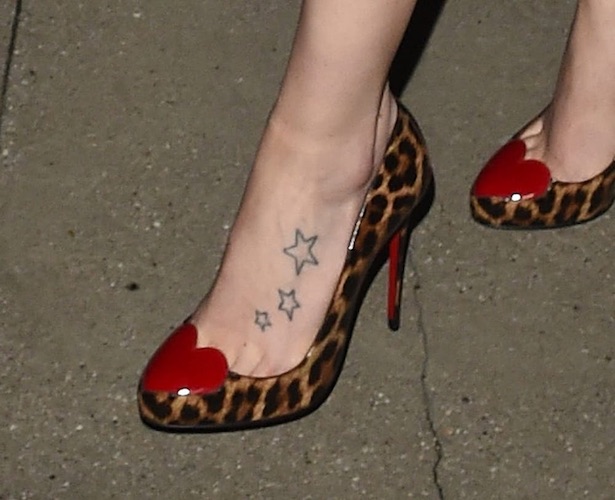 Daisy Ridley has three tattoos. Five, if you count each of the three stars on her foot individually (top photo). When asked about the stars, Ridley admitted that she got them done when she was only 15, joking that she was "breaking all the rules" early on. 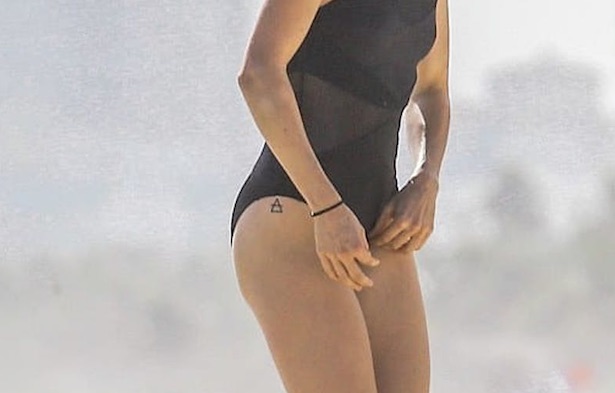 Her other tats include a peace sign behind her ear and the alchemical symbol for air (a triangle with a line through the top) on her hip (see above photo).

Ridley Initially Got Into Acting Because She Misbehaved As A Child

Daisy revealed that her mother thought it would be a good idea for her to go to a performing arts school at age 9 because she was "very naughty" and needed to keep busy. It wasn't until she'd attended for some time (she went until she was 18) that she began acting and subsequently falling in love with her craft. Daisy also briefly attended Birkbeck, University of London to study classical antiquity.

I went to a school called Tring Park School for the Performing Arts. I went because initially I was very naughty, and my mom thought if I was busy, I'd be better. And I didn't really do acting until later on in the school, with an amazing teacher. I left, went traveling, came back.

The Time Rey Almost Threw Up On Master Luke...

One of the funniest Daisy Ridley facts is that she almost drenched Mark Hamill in vomit. While filming the final pivotal scene in The Force Awakens where Rey finally discovers Luke's secret location and hands off his lightsaber, Ridley was horribly ill. The brief interaction was shot in Ireland on beautiful Skellig Michael island, which Ridley described as the best place to be sick.

Whats up with this week!? There was Supergirl and The 100 finales, Game of Thrones S7 trailer and The Last Jedi VF PHOTOS. Too much excitement for my heart... (I'm not complaining 😄)

I'll be very honest with you. I was very sick one of the days we filmed. Mark was trying to do his serious acting. And I was wrenching in the corner. I'm not kidding. It was so awful. But if you're going to be sick anywhere, why not be sick on Skellig Michael? The first time I went was in a helicopter. I was like, 'Oh, my god! This is so cool.'

She's Struggled With Endometriosis For 10+ Years

Daisy has been candid about her struggle with endometriosis. She also revealed that polycystic ovaries (PCOS) caused her to have severe acne breakouts. The condition causes "infrequent or prolonged menstrual periods," according to Mayo Clinic. She has stated that cutting out dairy and reducing sugar intake has helped her skin clear up. Ridley was diagnosed with endometriosis at 15, around the same time she got her first tattoo. Endometriosis is classified as a chronic, painful disorder where the tissue that normally lines the inside of the uterus grows on the outside. Daisy has undergone surgery for her condition and encourages young women and men in similar situations to seek help and not be ashamed to share their stories. 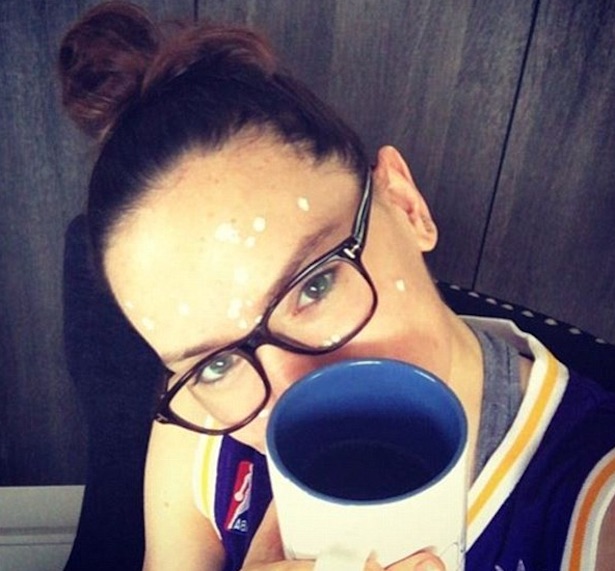 To any of you who are suffering with anything, go to a doctor; pay for a specialist; get your hormones tested, get allergy testing; keep on top of how your body is feeling and don't worry about sounding like a hypochondriac. From your head to the tips of your toes we only have one body, let us all make sure ours our working in tip top condition, and take help if it's needed.

She Loves To Sing (And She's Very Good At It)

Don't be surprised if you see Daisy in the next big Hollywood ensemble musical. After singing "At The Ballet" alongside Les Mis legend Anne Hathaway, Ridley proved that she's a total double threat with a set of powerful pipes. We look forward to seeing her name on more projects that showcase her amazing voice.

When I feel comfortable, I just like to sing and hum, and I don't even know I'm doing it. But sometimes someone will come over to me like, 'I love that song you were singing, but it's distracting.'

She Narrated 'The Eagle Huntress,' The Best Documentary Of 2016

"Daisy Ridley narrated an eagle documentary" may not SOUND like super exciting news but The Eagle Huntress — the true story of a 13-year-old girl from Mongolia who became one of the first women to enter male-dominated eagle hunting competitions — should not be overlooked. Before she was attached to the movie, director Otto Bell sent footage to Ridley, who was so moved by the story that she called her mother and cried after watching it. Daisy not only narrates the story of young Aisholpan, but serves as a producer alongside Morgan Spurlock. 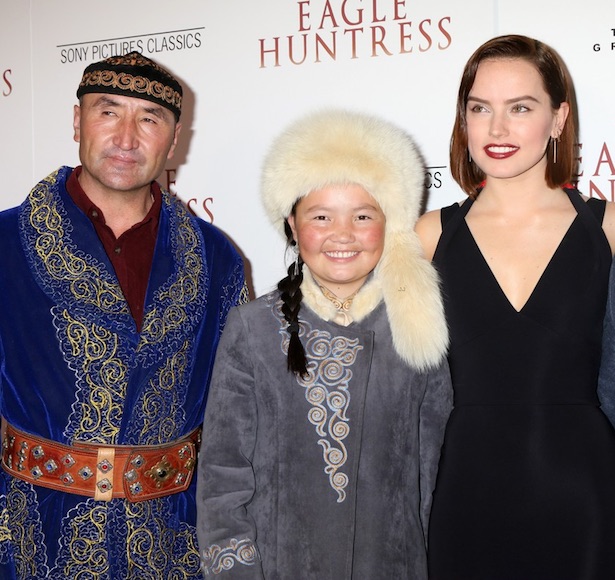 Daisy's Next Big Project, 'Chaos Walking,' Could Take Her To The Next Level

In summer of 2016, it was announced that Ridley would star in the movie adaptation of the dystopian young adult series Chaos Walking, written by British novelist Patrick Ness. The movie is titled "Chaos Walking" in spite of the first book actually being called "The Knife of Never Letting Go," so its unclear if the movie will spawn a sequel or what that sequel would be called. This will most likely depend on how well it does as the box office. This shouldn't be difficult with Ridley and Spider-Man: Homecoming actor Tom Holland in lead roles as well as Doug Liman (Edge Of Tomorrow) directing and Robert Zemeckis (Back To The Future) producing. Crossing our fingers that Chaos Walking breaks through to the masses the way The Hunger Games, The Maze Runner, and Twilight have.