What comes to your mind when you hear the name, Mandy Rose? Well! To put it all into a summary, Mandy Rose is an amazing wrestler signed by WWE. She also features on American television personality show ‘Total Divas’. Despite being a talented girl on many fronts, she also has an interesting love story on WWE and her personal life which has created a buzz among her fans.

Who is Mandy Rose?

Born in 1991 New York Westchester county in Jolly. Mandy Rose has had a phenomenal career, starting as a fitness and figure competitor; she is the youngest of four siblings from an Italian American family. 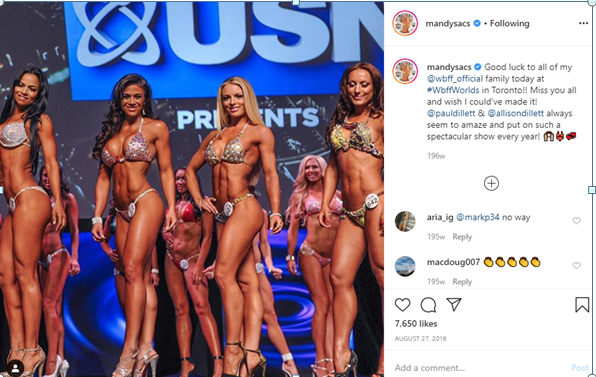 She studied at Iona College situated in New York. Mandy made her debut in the wrestling world in the year August 2015.  She is five foot four inches tall and weighs 120 pounds giving her the best physique for WWE. Her success in the WWE platform has been attributed to efforts by her team of trainers such as Billy Gunn, Sara Del Rey, Booker T, and Lita.

9 Facts about Mandy Rose That You Did Not Know

1. She was overprotected growing up

Having three elder brothers, Mandy Rose was subject to overprotection by her brothers. An incident that highlights the level of protection she experiences was when Gary the younger brother of the three punched the then-boyfriend to Mandy Rose as they were walking holding hands.  This incident happened at a time when Many Rose was at eight grades. The situation made Mandy realize that it was not possible to have public relationships at school due to the overprotective nature of her brothers.  The anecdote of disapproval from other people may have been an inspiration to the ongoing love story between Mandy and Otis.

She is a beauty with brains; Mandy Rose attended Lona College in New York before starting her career at WWE. She studied Audiology, Speech-language, and pathology.  Her studies not only focused on interviewing and persuasion but also played a key role in rehabilitating people having problems with eating and talking.


Language and speech therapists are crucial for patients suffering from stroke to recover. This has led to a substantial number of individuals joining the healthcare provider sector.  Mandy Rose was not lucky at this career as her chosen master’s program application was unsuccessful leading her to try other opportunities that later landed her at WWE.

Mandy rose while on an interview with Sean Kim touched on an incident with a patient while conducting her Pathology course at the University. She recalled the experience of working with an individual who could not talk and how establishing a bond with the individual was key for rehabilitation. The experience was life-changing to Mandy and propelled her to undertake community work as one of her highlights in working with WWE. She visits schools within her local area apart from Make A wish and be a Star routine.

Mandy Rose worked in her father’s deli after completing college. She served as a bartender and a waitress. During this period, she lived with her parents back at Yorktown heights in New York. Mandy Rose would work out in the gym for recreation purposes not knowing her great physique would lead her to fame. She was urged by her colleague to trying out Bikini competitions a segment of bodybuilding. Mandy Rose quickly brushed away the idea as it would require her to wear stripper heal and walk with a bikini on stage. However, she took the chance and contracted a trainer who assisted her to prepare for an event scheduled in Boston. At the event, she was impressive and wowed the judges with both her natural presence as well as her physique.  It was her first-ever competition but she was first!

5. Her link with Triple H

After a successful debut on the physique competition, she moved to participate in world bodybuilding fitness and fashion bikini competition in 2013. At this event, she failed to rank in as she was too lean.  Mandy Rose being a fighter all her life didn’t give up After the disappointment, she changed her trainer and the preceding year saw her crowned as the Champion of world bodybuilding fitness and fashion bikini. It was a coincidence that her new coach was a former trainee of Joe DeFranco, who was a personal trainer to Triple H for a long time. Her coach had interacted with a number of wrestlers and knew Mandy Rose had all it takes to try out WWE. At this point, Mandy Rose considered the idea of having conquered bodybuilding and shifted her goals to new opportunities in the WWE superstar.

6. She wasn’t a wrestling fan

In an interview with Corey Graves “On After the Bell, God's Greatest Creation.” she talks on how her trainer suggested that she should try enrolling with WWE. Also, she got support from her boyfriend by then who was a fan of WWE and was aware that WWE was contracting trainees to participate in the new season of Tough Enough.


Mandy admitted that she never used to watch wrestling growing up and it prompted her to undertake intensive research before giving it a try. After the research and preparation, Mandy excelled in her interview which was done via Skype. Rose later joined the ‘Tough Enough’ show where she interacted with other contestants. Mandy Rose is a living testimony that one does not need to be an ardent fan of something for them to excel in it. Her will, hard work, and dedication saw her achieve new heights. 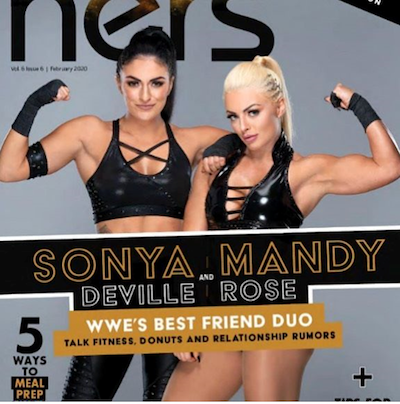 Mandy being from the bikini and modeling background was subjected to scorn from other trainees who had a past in athletics. When revealing how they fast became friends with Sonya De Ville, Mandy comments on how DeVille introduced herself after glaring at her. After the pleasantries, Sonya DeVille develops a liking to Mandy Rose. They even slept in adjacent beds at WWE provided accommodation taking their friendship to a new level.

Mandy and DeVille's friendship blossomed during the training duration and they later debuted together under the short-lived ‘heel stable ’at a time when Paige was at the helm. The two have been a tag team using the names ‘Fire and Desire ’and lately split as a result of the romantic storyline between  Mandy Rose and Otis. 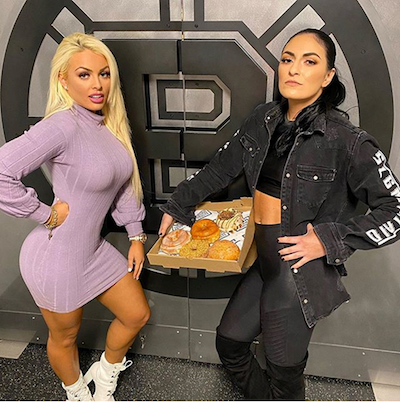 A picture of Mandy Rose and Sonya Deville from @Mandysacs Instagram showing their love for simple treats ‘Donuts’.

While hanging out during the training duration in NXT, Sonya DeVille and Mandy Rose would spend time after shows developing their friendship. One night they decided to buy donuts together and here is when they learned that they were both obsessed with tasty treats.


In a bid to market themselves, they gave fans more insights into their personal lives by creating YouTube Vblog which debuted in 2018 August as “Dandy’s Donuts”. The videos were released at least once a week. Also, the two changed the channel name Damandyz Donutz. They would also engage in conversation about life on the road before discussing the amazing cuisines they would buy from local stores.  Mandy commented that she likes Donuts from Meche's in Louisiana more.

9. She is an entrepreneur

The image above is from Google Play displaying Mandy Rose fitness application .

Her application can be accessed both on AppStore and Google play and has a 12- week programmer that assists user to get in good shape using minimal training gear.

Mandy Rose and Her Relationships (Include Otis) 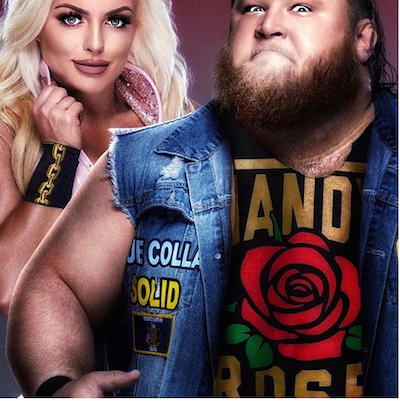 Mandy Rose and Otis photo from Mandy’s Instagram . The two have been in a love triangle as WWE raw couple

The WWE has for some months highlighted the love between the Golden goddess Mandy Rose and Otis. Otis is portrayed as a lovesick, loveable loser who is dating Mandy Rose. Among the memorable moments, this year is when Otis defeated Dolph Zigler and got a kiss from Mandy Rose.


Mandy Rose valentine date left many of her fans speculating, Mandy Rose had agreed to go out on a date with Otis, but Otis did not show up and instead, Dolph Zigler showed up leading to a romance between the two.

Currently, Mandy Rose's real-life boyfriend is Tino Sabbatelli who is a professional wrestler. Mandy revealed her new man in 2018 on Lillian Garcia’s WrestleMania podcast. Before this relationship, she was in an engagement with Michel Lubic.

What is She Currently up to

After being the winner in the World Beauty Fitness& Fashion Bikini championships. Mandy Rose competed in the series ‘Tough Enough’ which features stars such as Velveteen Dream, Sonya Deville and Chelsea Green. Despite Mandy involving schedule, she has been active outside WWE mainly showcasing her entrepreneurial spirit that has boosted her brand. Apart from building a fitness app, She is also creating a  brand of skincare called Amarose. The brand will have four distinct products- a lifting serum, lifting eye gel, boosting moisturizer, and a beauty boost cleanser. Mandy Rose is constantly setting new goals that stretch beyond her limits and conquering them. Her profession in the ring is the ultimate ingredient that will propel her to a new level of superstardom and she aims to seize the opportunity 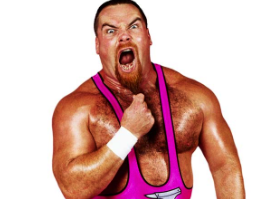 Jim Neidhart, the legendary WWE and Bret Hart's former tag team partner, is dead. Here is all you need to know about the fallen, highly decorated athlete. 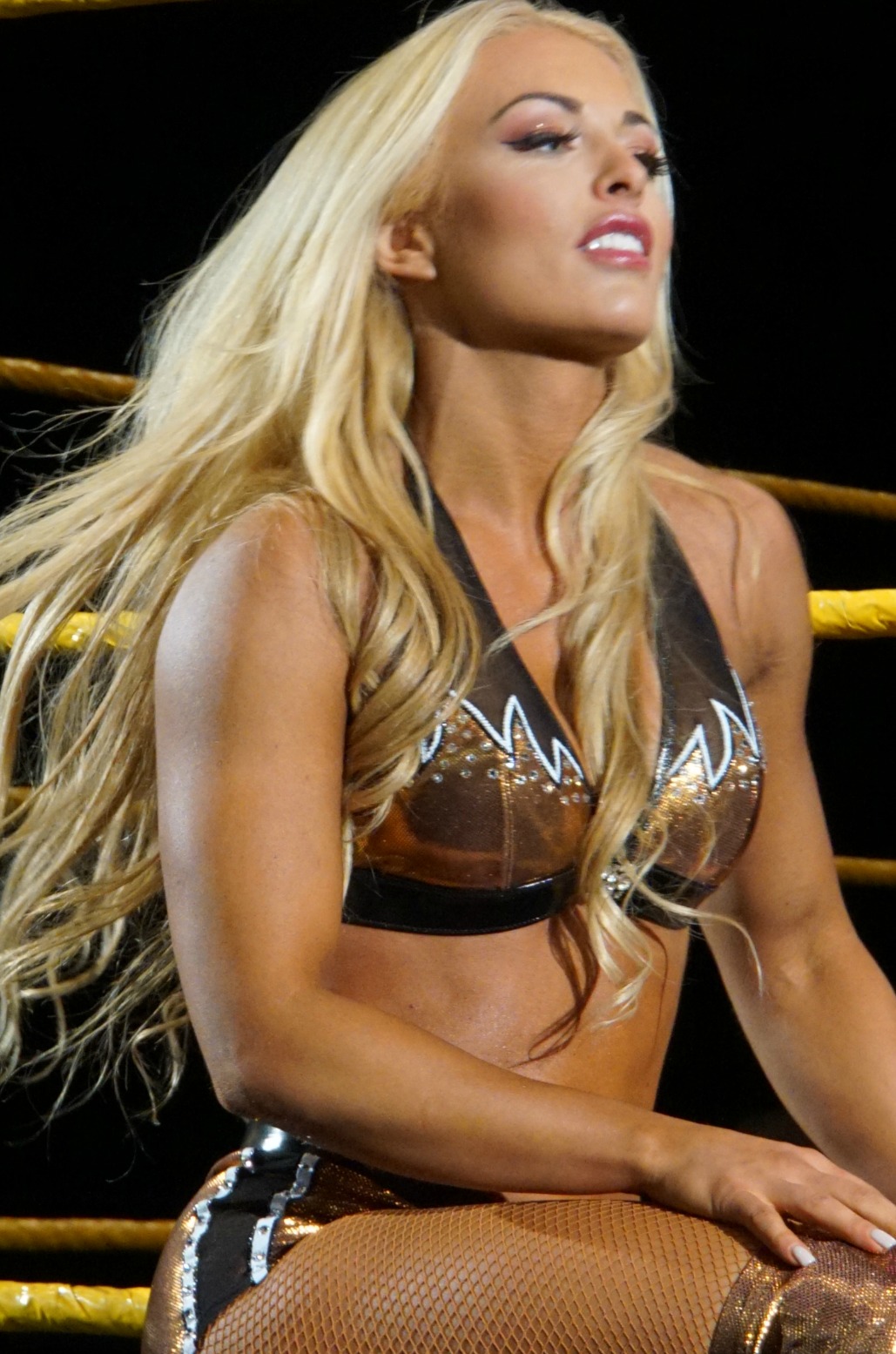 Mandy Rose is a talent to watch in WWE. She is a superstar who had the talent, the body, and looks that promote her career as a fitness queen and television personality. We enjoy watching her on the TV program ‘Total Divas’ and on WWE. We can’t wait to see what more she has in store for us in the world of entertainment.