Who is Bryan Cranston?

Bryan Cranston has earned fame playing various versatile, interesting and sympathetic roles on television shows like Breaking Bad. People have loved him in his iconic role as Walter White. Breaking Bad continued for five seasons successfully and people loved him for his relatable acting. Breaking Bad also got him the award of Outstanding Leader Actor in drama series at the Primetime Emmy Awards. His parents had a troubled marriage and his father walked out on them when Bryan was 11 years old as his father was unable to provide for the family. After 11 years, Bryan tracked down his father at the age of 22 and maintained a relation with him until his death in 2014. The great actor is married to Robin Dearden and their marriage is pretty adorable. He met his wife, Dearden on the sets of an 80's show 'Airwolf'. Their wedding took place in 1984 and they have been long since married. They are an ideal couple in regards to Hollywood standards. The intriguing 'sad faced girl' in 'Breaking Bad' was none other than their daughter and aspiring actress named Taylor Dearden. In the same episode, the 'emotional woman' role was played by Dearden. Drama and acting skills run in the family genes. Bryan Cranston's versatility ranges from comic to dramatic and the transition was very seamless the moment he shifted to more dramatic roles. He met the love of his life on a set and having been married since then. Below listed are some 5 less known facts about the great actor's wife Robin Deardon.

1. She first felt sparks for him when he pointed a gun at her

While shooting for an episode of Airwolf, Robin Dearden recalls how he held a gun at her when they first met. It was 30 years back. The scene was such that Cranston played the role of a jilted ex-boyfriend who held sorority girls hostage and Robin Dearden was one of the sisters held hostage. In a recent interview, they fondly recall that television show as terrible and how it had changed their lives. When they first met each other, they both had other partners, though she confesses she thought he was cute. They flirted with each other innocently in spite of being involved with other people. None of them had any inkling of what the flirting would lead to. They bumped into each other a year later, shared a friendly kiss which got too long and eventually got together as a couple. How romantic!

Had the most vivid dream including this beautiful couple last night, why can't it be real?? 😮😊😂 #BryanCranston #robindearden #dream

Cranston was married to a writer Mickey Middleton in the year 1977 after dating her for a year. But they split up in 1982, four years after their marriage as they felt that the relationship had lost its charm. That's okay - his current marriage is much cuter.

3. They have a daughter named Taylor

Taylor Cranston was born to Robin Dearden and Bryan Cranston in 1993. At age 24, she is an aspiring actress and has already managed to establish herself in the film industry. She played a role in the 'Sweet/Vicious' romcom and also in '101 ways to get Rejected'.

4. Robin Dearden appeared in a scene in Breaking Bad

Both Cranston's wife and daughter did cameos in his successful television show Breaking Bad. They were seen playing extras in the same episode. 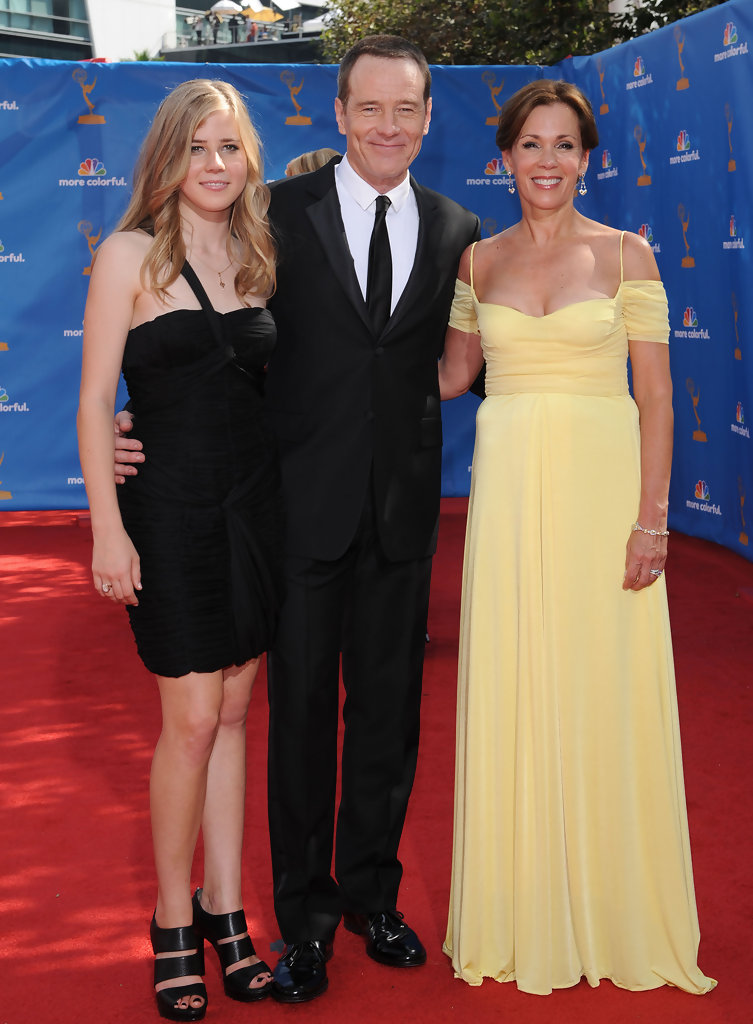 Bryan Cranston with this family

She has done a fantastic job in movies like 'Wooly Boys' , 'Last Chance' and 'Myron Movies'. Since her cameo in Breaking Bad, she has had plenty of work. She has also appeared in other works like 'Murder She Wrote' from the year 1987 to 1991 and T.J. Hooker from 1982 to 1986. Her hit film 'Wooly Boys' came in the year 2001 and 'Last Chance' in the year 1999. 'Last Chance' was written and directed by Cranston himself.

"What's your favorite thing about her?" To which Cranston (dreamily) replied, "She still gets giddy when she sees a firefly."

When photographed by Brandon Stanton at the 2014 Met Gala, Cranston was asked to reply about one thing which he still adores about his wife.

Arrival at the Oscars

The duo was last spotted together on the Oscars Red Carpet event for the 88th Academy Awards.

Bryan Cranston was last spotted enjoying a leisurely holiday with his wife Deardon, at the Hawaiian Island. Cranston, 60, was seen clad in a Blue shirt, shorts and a hat and in great spirits basking in the warm, fresh air. Bryan Cranston is supposed to get the Navigator Award on Saturday at the Maui Film Festival in the year 2016. He is seen taking a relaxed and most well-deserved holiday with his wife. He maintains strong ties with his former 'Breaking Bad' co-stars and recently did a comedy sketch with Bob Odenkirk and Aaron Paul. Last month, the actor was seen in a parody of 'My Sweet 16', playing the role of a spoiled birthday day in the chat show Jimmy Kimmel Live!.The hilarious reality show had him play 'My Sweet 60'. His movie, 'The Infiltrator' released in June, 2016 got him rave reviews worldwide.