Who Is Nancy Juvonen? 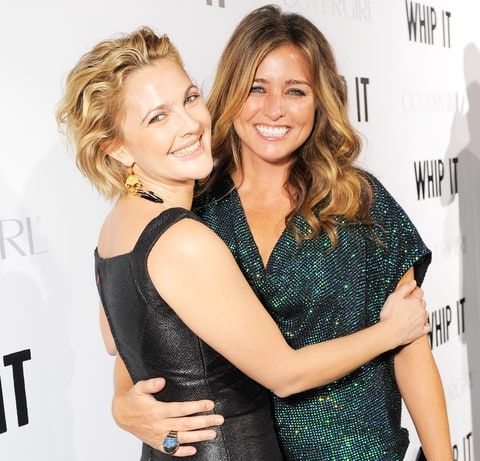 Are you a fan of The Tonight Show with Jimmy Falon? It's such a good show, right? A great way to let go and have some laughs. If you're a fan then you know that Jimmy dotes on his wife, the very talented writer and producer, Nancy Juvonen. Do you want to know a little bit more about this woman that took Mr. Fallon's heart? Let's get to it then.

Nancy Juvonen is of Finnish descent, she was born in Connecticut on May 18, 1967. She was raised in California. Her father, the late William H. Juvonen who was a former Marine Aviator. Jimmy Fallon presented his father in law in March 2015 with a Martin-Baker watch... Why? you ask Well, it was to commemorate an event (that could've gone very wrong) from Mr. Juvonen's days as pilot training. In September 1961, he was flying a gunnery mission as a new aviator undergoing fleet replacement pilot training in a VMF 334 when he experienced a wing malfunctioned and had to eject from the aircraft. The seat he used to eject was manufactured by Martin Baker.

Nancy graduated from the University of Southern California with a degree in sociology and cooperative education. After graduating college she had some very odd jobs before she had her big break as a writer and producer. of some movies that you probably have enjoyed. We'll tell you about that later. She now owns a production company that she co-founded with her friend Drew Barrymore. Nancy and Drew met in 1003 through Nancy's brother Jim and since then they have worked together.

Nancy Juvonen is a very private person, it's only through her husband's show (especially during the Home edition due to Coronavirus) that she has revealed nuggets about their family life. She and Jimmy Fallon got married in 2007 in a private ceremony on a Caribbean Island, and have two adorable girls who were born through a surrogacy pregnancy.

What jobs did she work on before becoming a writer and a producer? 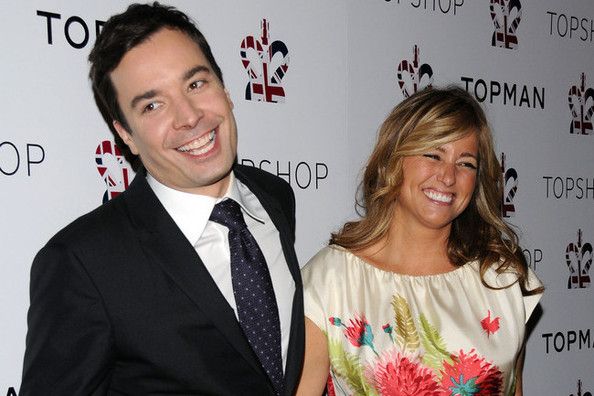 Apparently, Nancy had some very odd jobs before she had her big break in Hollywood. She revealed all this via #AsktheFallons (a segment from The Tonight Show Home Edition)After graduating from college with a degree in sociology and cooperative education she decided to experiment a little until she found her calling. She used her smarts and put them to good use.

Let's see, she went to Wyoming to work in a dude ranch (can you hear her husband say "Duuuuude!"?)

She also worked for an artist who was trying to eradicate homelessness, she said that was a fun job but she lost so much money on that one. She worked at a mortgage firm, she worked cleaning houses in San Francisco for a while. Nancy also worked as a private flight attendant, she used this experience later on, when she appeared in an uncredited cameo in Donnie Darko. Have you seen it?

How Did She Build Up Her Career In The Production Industry?

It was the early 90's when Nancy finally had her big break, she was on the way to a great career in the film industry. Nancy became the assistant of the late Clarence Clemons, who was no other than the saxophone player for the Boss aka Bruce Springsteen's E Street Band. Great place to start, right? However, her real break that landed Nancy her dream job came with the help of her big brother Jim, who's also a writer and producer.

In 1995, Jim was working in the movie Mad Love, a teen romantic film starring Drew Barrymore and Chris O'Donnell. He, being a great big brother, introduced Nancy to Drew, and that was the beginning of a journey of friendship and great things for both of them. They hit it off so Drew convinced Nancy to move to LA and get herself immersed in the film industry. And that's how Nancy Juvonen became an American film producer. She partnered up with Drew and they are co-owners of the production company Flower Films. They have produced some fan-favorite movies since then.

What Famous Movies/Tv Shows Did She Work On?

Nancy and Drew through Flower Films have produced some well-known films, the majority being comedies that the fans have enjoyed. Do you remember Never Been Kissed? It was one of their first produced romantic comedies, starring Drew Barrymore, Jessica Alba, and Michael Vartan, among others. This film was James Franco's debut.

How about the nostalgic gem Donnie Darko? This science-fiction psychological thriller was almost released straight to video, but at the last minute, Flower Films decided to release it in October of 2001. The film was scarcely advertised because the advertising featured a crashing plane and 9/11 was still very fresh. That was not the end of the story for the film though, because when it was released in 2002 on VHS and DVD it became a surprising success, it even developed a cult following.

Who doesn't remember 50 First Dates? The romantic comedy starring Drew Barrymore and Adam Sandler has become a classic and has inspired a number of international remakes. Flower Films has also been the ones in charge of producing the Charlie's Angels franchise. They started in 2000 with Charlie's Angels starring Drew Barrymore, Cameron Diaz, Lucy Liu. They follow with a sequel in 2003, Charlie's Angels Full Throttle were Barrymore, Diaz and Liu reprise their roles. This film also featured Demi Moore, Justin Theroux, and Bernie Mac. Flower films also decided to produce Charlie's Angels for TV. It premiered on ABC in September 2011 but due to low ratings, it was canceled after just one season. In 2019 another Charlie's Angels movie was released, featuring a new generation of Angels that included Kristin Stewart, Naomi Scott, and Ella Balinska. 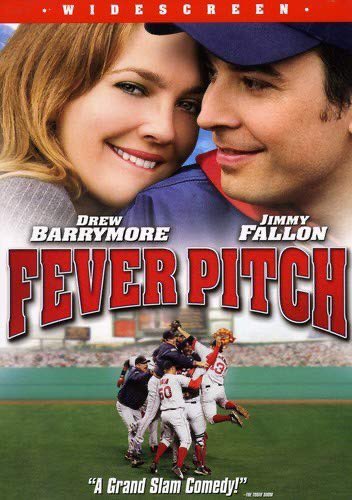 Other movies produced by Nancy and Drew's Flower Films production include:

How Did Nancy and Jimmy Meet?

Nancy and Jimmy met in 2005 on the set of Saturday Night Live, they were introduced by Drew Barrymore. Drew was rehearsing lines with Jimmy for one of her hosting gigs when Nancy showed up and Jimmy went overboard to make her feel welcomed. Nancy said in a video recently that she felt "embarrassed and cool at the same time" with that welcoming line. They met again on the set of Fever Pitch and they hit it off. She said that Jimmy was friendly, funny, welcoming, that he loved music.

She started to fall for her now-husband when she saw him around kids. They were on the set of Fever Pitch when one of the directors brought his kids on set and Jimmy was so easy with them and really played with them. That's when her heart melted. For Jimmy, it was when Nancy wore white pants... for him, her ensemble that day was what sealed the deal, plus she was funny and they had a great time.

They started dating and in 2007 he proposed. He got on one knee at the end of the dock on her parent´s summer home in New Hampshire's Lake Winnipesaukee. He almost kind of blew it because he started bawling, Nancy thought he was having a stroke! However, he still got her because she said yes! They got married three months later on a private island on the Caribean in a very private ceremony. 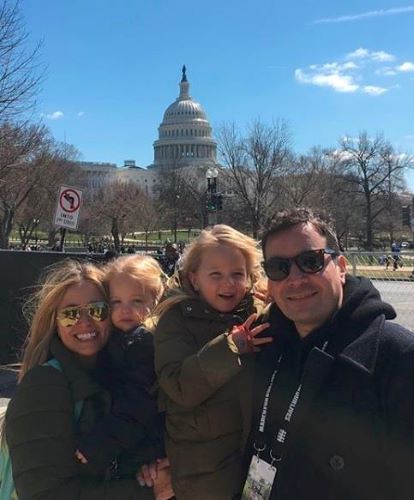 There's no secret that The Fallon's struggled for various years to have a child. They tried everything and it was a disappointment after another. So they decided to try a surrogacy pregnancy, however,  they didn't tell anyone about it when it finally happened. That's why it was such a huge surprise when they announced that little Winne had arrived in 2013. She got her cute name because of the place where Jimmy proposed to Nancy, Lake Winnipesaukee, that name was too long so Winnie it was.

They decided to try again a year later and after another successful surrogacy pregnancy, Franny arrived in 2014. They are the cutest of kids and have stolen the show from his famous dad in The Tonight Show Home Edition.

Related Article: Gabriel Grapperon Wiki: Director, Net Worth, 'Locked Up' And Facts You Need To Know 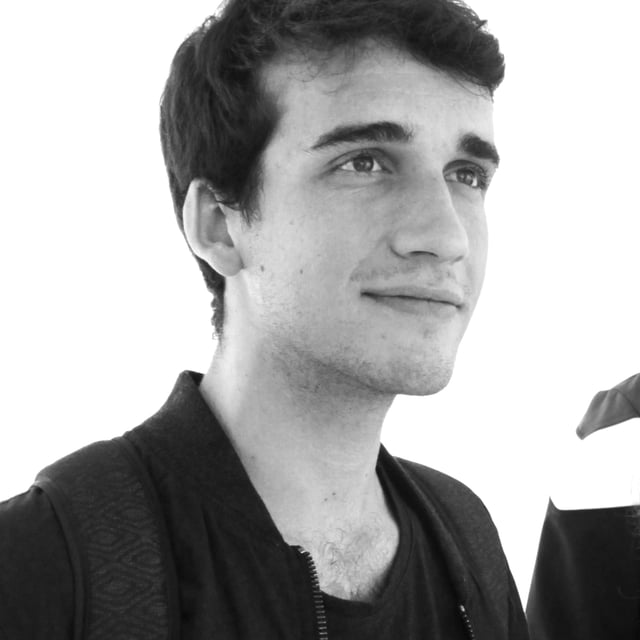 Gabriel Grapperon is most famous for his career as a director. Read more to learn about his overall net worth, his age, movies he's directed, awards he's won, nominations, and more!

Nancy Juvonen is a very successful writer and producer, responsible in partnership with Drew Barrymore for producing some fan-favorite movies. Her path to film success was full of odd jobs that help her land her dream job at the right time. Through her job, she met the love of her life and now has a very full and cherished family life.