Lily James, best known for acting in Downtown Abbey and Baby Driver, is dating Matt Smith who has been in Doctor Who, The Crown, and Lost River. The couple has been dating for 3 years now and although he is well-known in England, a lot of US and American entertainment junkies are just now finding out who he is and looking at the power couple as literal goals. So, here is 5 Facts to Know about Lily James's Boyfriend, Matt Smith.

1. He is the youngest actor to take on the lead role in Doctor Who.

He took the role of the titular Doctor in Doctor Who at age 26. When he took this role he was 3 years younger than the previous youngest Doctor Who actor: Peter Davison. This is not to be taken lightly. The Doctor Who franchise has been on since 1963. It has a cult following of dedicated sci-fi fans who don't just accept anyone as their Doctor (Jodie Whitaker, becoming the first female cast as the role of doctor, was not received well by long-standing fans of the show). Matt Smith had a stint of 3 years on the show, commanding as Time Lord of the TARDIS from 2010 to 2013.

2. Matt Smith made his TV debut in The Ruby In the Smoke in 2006 which aired on BBC.

In 2006 at the age of 24, he was cast as Jim Taylor in the TV movie adaptation of a novel by Phillip Pullman of the same name, "The Ruby In the Smoke". This movie was a straight to TV adaptation and on set Matt Smith must have gotten bit by the acting bug because he hasn't stopped since. He was a former football prodigy who turned to acting and we are so happy he did because with his new roles in Netflix's breakout series The Crown and Ryan Gosling-Produced and Directed "Lost River" it seems like he'll be around for a long time, only landing bigger and better roles and blessing our screens of his beautiful face. Then in 2015, he was in "Terminator Genisys". He played the role "Skynet" in "Terminator Genisys".

Lily James is 5 foot 7 so she needs a man who can keep up with her. When we think of actors we never expect them to be as tall as basketball players especially if they're handsome (I'm looking at you Tom Cruise). Lily James's boyfriend is somehow lucky enough to have both and she's lucky to have him.

4. Ryan Gosling fell in love with him!

Well maybe not exactly, but he loved his performance on Doctor Who and that immediate idolization was enough to cast him for the villain role in his first solo film, Lost River, a Gothic Fairytale film in which Matt Smith steals the show. Watch the interview with Ryan and Matt Smith below when Ryan first laid eyes on Matt Smith he knew he had to have him - Lily James is probably familiar with that feeling.

As an added treat watch Ryan Gosling gush over Matt Smith in this clip, I see a bromance brewing. As the interviewer pointed out Matt Smith is well known in England but he has a small following in America but that popularity is quickly breaking him out overseas as Matt Smith takes on more roles.

5. His "Dream Vacation" is so humble.

When I think a "Dream Vacation" I immediately see palm trees, the beach and a coconut in my hand -- Maybe Hawaii or Tahiti or even Fiji! Me and Matt Smith have very different ideas of a "Dream Vacation". According to an interview with Popsugar, Matt Smith's dream vacation would go a little something like this:

"I'd go and hang out in New York. Get myself a Mustang. Drive across the US. Take my lady. Get my best friends to meet us halfway. Off we go again. Great."

He wants to go on a relaxing cross-country drive in a Mustang. Lily James better prepare herself for this ride. They have been spotted multiple times in New York City taking a stroll or just hanging out, so this dream vacation may become a reality pretty soon. Check out the cute candid couple below: 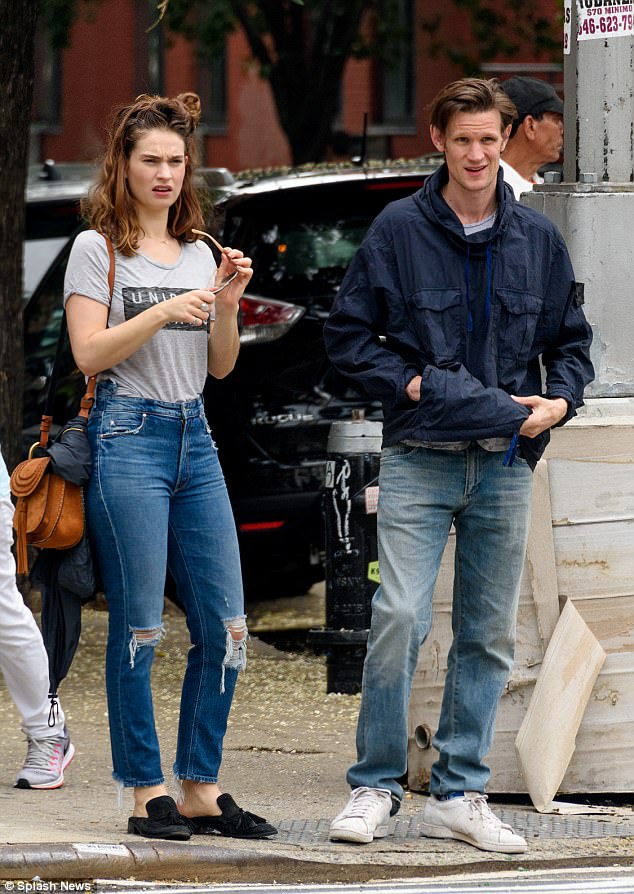 Matt Smith and Lily James on a stroll through New York City.

I wonder if he has the mustang parked around the corner and they're going to start their dream vacation.

Bonus: He is actually an angel sent from above.

According to Twitter user Ed Button, Matt Smith and his then-co-star Karen Gillian from Doctor Who made a boy's day by paying from their own pocket for him to take a picture with them. I'm swooning. Not only is Matt Smith a brilliant actor, a handsome man, and a former football prodigy but he is also a compassionate human being. Let's just take a moment to ask why we are so lucky to have him on earth? Lily James knows how to pick a boyfriend.

Matt Smith helped a disabled child out of his wheelchair at a convention I was at a few years back.

He and Karen Gillan did a photo op with the boy, and a 2nd one with him and his family. "We can't afford it."

Paid for the 2nd one out of their own pocket.

The super cute power couple has been going strong for 3 years now so of course, the engagement rumors began and 28-year old Lily James was quick to deny them. However, she added that their relationship was happy and going great. As a new Hollywood starlet, she knows how to give answers that dispell rumors but keep hope alive in our hearts that nothing is going wrong and we just might see wedding bells in the future. I have my fingers crossed that this couple stays together and continues to slay the scene.