Colin Firth, a British actor known for his work in such films as, The King’s Speech, Bridget Jones’s Diary, and Kingsman 2: The Golden Circle, was born on September 10th, 1960 (Age 57, height 6’ 2”) in Grayshot, Hampshire England. Firth was born to two academics: Shirley Jean and David Norman Lewis Firth. Firth became interested in acting at age 10, and by age 14 he was acting regularly in small stage productions. Ten years later, Firth would star in his first film. Firth’s first feature film was Marek Kanievska’s, Another Country (1984), alongside Rupert Everett who bears a similar weight and height as Firth. From there Firth went on to become quite the heartthrob, starring in such roles as Mark Darcy in Bridget Jones’s Diary (2001) and in Richard Curtis’ directorial debut, Love Actually (2003). While Colin Firth became well known as the hopeless romantic, he received high praise for many of his roles, unlike many actors who become big in the realm of romantic comedy. Firth would go on to star in a wide variety of films, allowing him to rise steadily toward the A-list. He is particularly known for The King’s Speech.

"I have a feeling my career has just peaked. My deepest thanks to the Academy. I'm afraid I have to warn you that I'm experiencing stirrings. Somewhere in the upper abdominals which are threatening to form themselves into dance moves. Joyous as they may be for me, it would be extremely problematic if they make it to my legs before I get off stage."

Firth shifted away from the romance genre and went on to star in films with high critical acclaim. In 2010, Firth received an Academy Award nomination for his role as George, a homosexual English teacher trying to cope with the death of his boyfriend, in A Single Man (2009). While Jeff Bridges went home with the Oscar that year, Firth came back into the race a year later. In 2011 Firth was nominated by The Academy for Best Lead Actor, alongside names such as Jeff Bridges and James Franco, for his magnificent portrayal of King George VI in The King’s Speech (2010). In The King’s Speech, he was simply fantastic. Firth’s co-star in the film, Geoffrey Rush, was nominated for Best Supporting Actor, but lost to acting powerhouse Christian Bale. Though the competition was heavy, Firth took home the Oscar, leading him further down the path of Hollywood stardom, and giving his net worth quite the bump.

The Kingsman and Beyond

Following his success in critically acclaimed films, Colin Firth went to star in a slew of films varying in theme and genre. Firth played con man in Gambit (2012), a haunted war hero in 2013’s The Railway Man, and a magician’s skeptic in Woody Allen’s Magic in the Moonlight (2014). Perhaps one of his most beloved recent roles occurred in a fan and critic favorite, Kingsman: The Secret Service (2014). Firth played Harry Hart (a.k.a. Galahad), suave leader of the Secret Service training program, and wowed audience with his perfect mixture of action and comedy. Just this year, a sequel was released. Titled Kingsman 2: The Golden Circle, Firth returns to kick butt and make audiences cry with laughter.

His fame and skillful acting have led to Firth being chosen for many upcoming films as well. In 2018 he is set to star in The Happy Prince, walking alongside Oscar Wilde, played by Rupert Everett. Firth is also set to be in two upcoming sequels to hit films: Mary Poppins Returns and Mama Mia! Here We Go Again. It may sound like a lot of work, but even with all of this attention, Firth has found a way of keeping his family presence strong. Firth has been a father for nearly 30 years now and seems to be loving every minute of it.

In 1989, while he was just starting to gain stardom, Firth entered into a relationship with Meg Tilly. The two stayed together until Firth’s career growth was beginning to slow down. They had a child together in 1990 named William Joseph Firth and broke up 4 years later. By 1997 Firth married director and producer Livia Giuggioli. The couple had two children together, Luca Firth in March of 2001, and Matteo Firth in August of 2003. They have been happily married now for 20 years and counting.

More Facts You Should Probably Know About Colin Firth 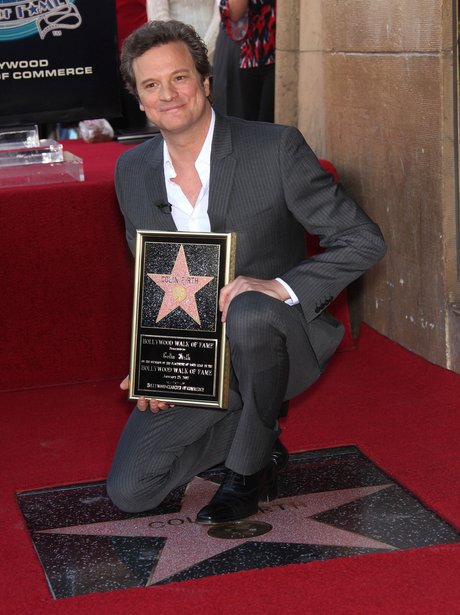 Colin Firth on the Hollywood Walk of Fame

Colin Firth’s net worth is now at an estimated $25million. He and his family live in beautiful homes in Chiswick, London, and Umbria, Italy. Having homes in both locations allow Colin and Livia to spend time with their friends and families, who live back in their hometowns. In 2011, Firth received his own star on the Hollywood walk of fame. Firth was also named one of the Time 100. For years now Firth has been rumored to be next on the growing list of British actors to be knighted by the Queen, though it has yet to happen. These rumors come not only from Firth’s acting career, but his long list of philanthropic activities and activism. Livia Giuggioli was born in Rome, Italy, in 1969, making her nine years older than Colin Firth.