Here we will find out more about the beautiful marriage and family of Nick Vujicic and his wife Kanae Miyahara Vujicic.

Who is Nick Vujicic

A world-renowned speaker, New York Times best-selling author, coach, and entrepreneur, Australian-American born Nick Vujicic has taken the world by storm and has inspired and motivated countless individuals. You might have heard of Nick as he speaks of the tremendous obstacles he faces as someone born with no arms or legs.

Nick persevered, no matter what life threw his way, amidst being bullied at school, fearful for his future, feeling helpless and isolated. It was through persevering that he discovered vital principles that enabled him to turn those obstacles into opportunities. Imagine the impact of his messages to those who have gone and are going through the same experiences as he did. 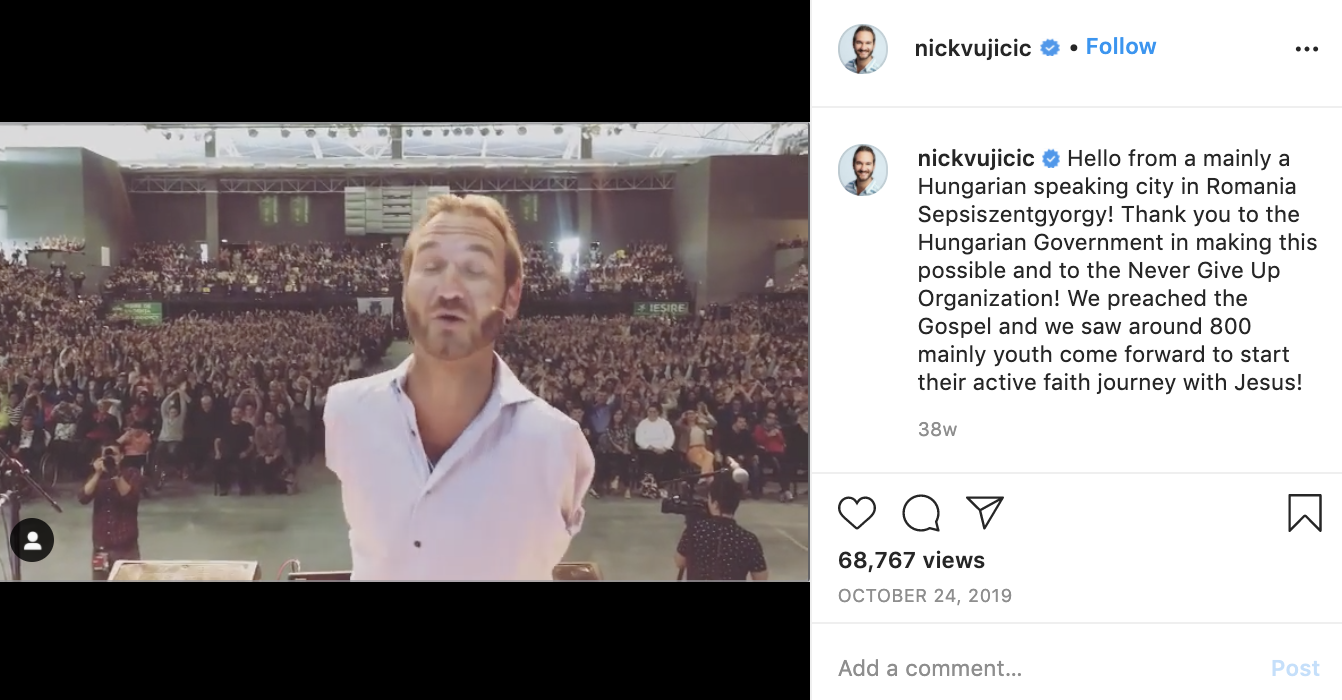 This is why Nick is one of the most sought-after keynote speakers in the world. He first started speaking to a group of six, and now, he can talk to a crowd of 800,000. What he says goes straight to the heart and rings true because he himself has personally experienced such things.

Nick is also an anti-bullying advocate and teaches students from all over the world how to make positive changes in their lives and to their communities through his innovative Social Emotional Learning (SEL) Curriculum called "Attitude is Altitude." 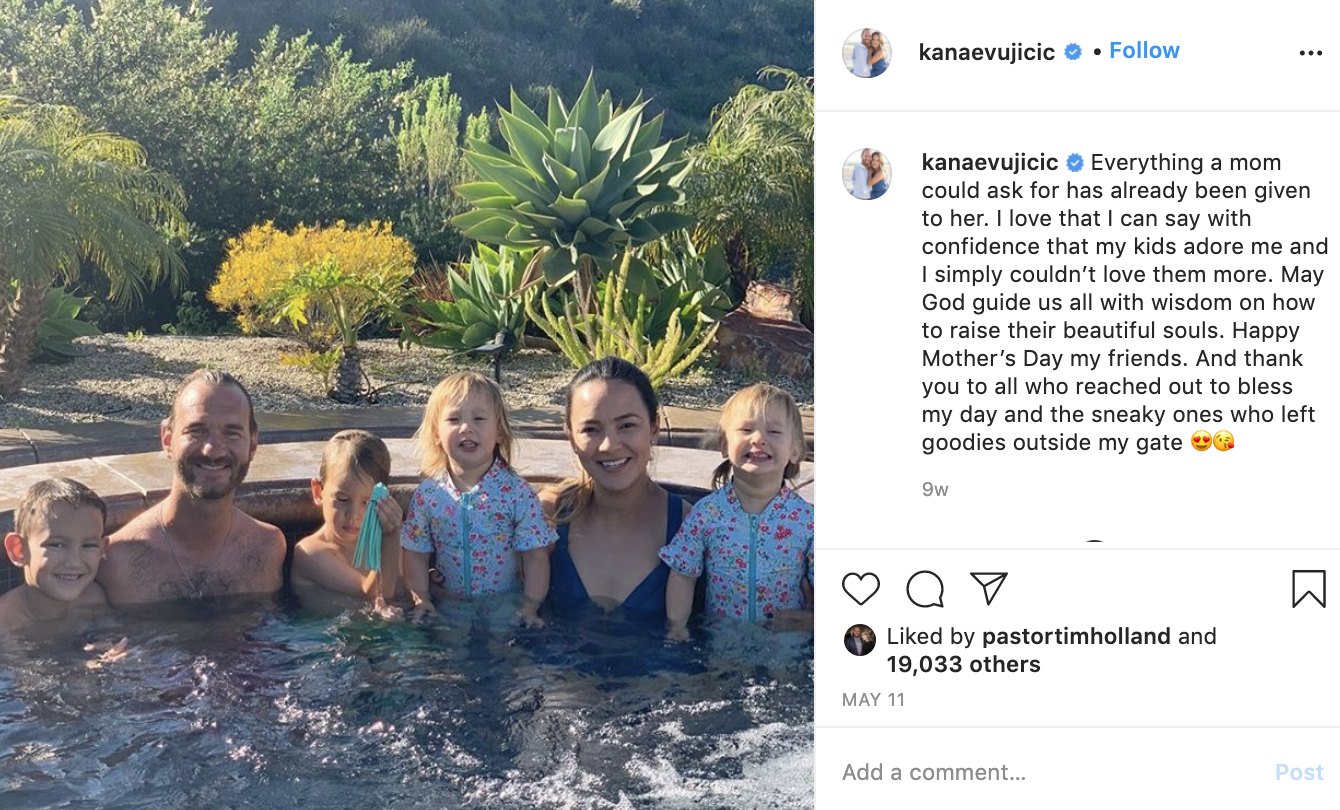 It is said that Nick would often think he would never have a wife until he set his eyes on Kanae Miyahara. Nick and Kanae met at one of Nick's talks in Texas. Kanae attended with her older sister, Yoshie, and Nick couldn't take his eyes away the moment he saw Kanae. It was love at first sight.

"My wife Kanae and I fell in love at the top of a Bell Tower in McKinney, Texas, at the "Adriatica." It was at a night where I only spoke to 16 people, and we watched the Butterfly Circus. I shared about the ministry's goals and heart in reaching the world. Fireworks were in our minds and hearts when our eyes connected that night."

After their initial meet-and-greet encounter, Nick asked Kanae and her sister to stay nearby so he could get to know Kanae. "The more I chatted with Kanae, the more I wanted to whisk her away and find out all there is to know about this enchanting girl who seemed so self-assured and kindhearted," said Nick. 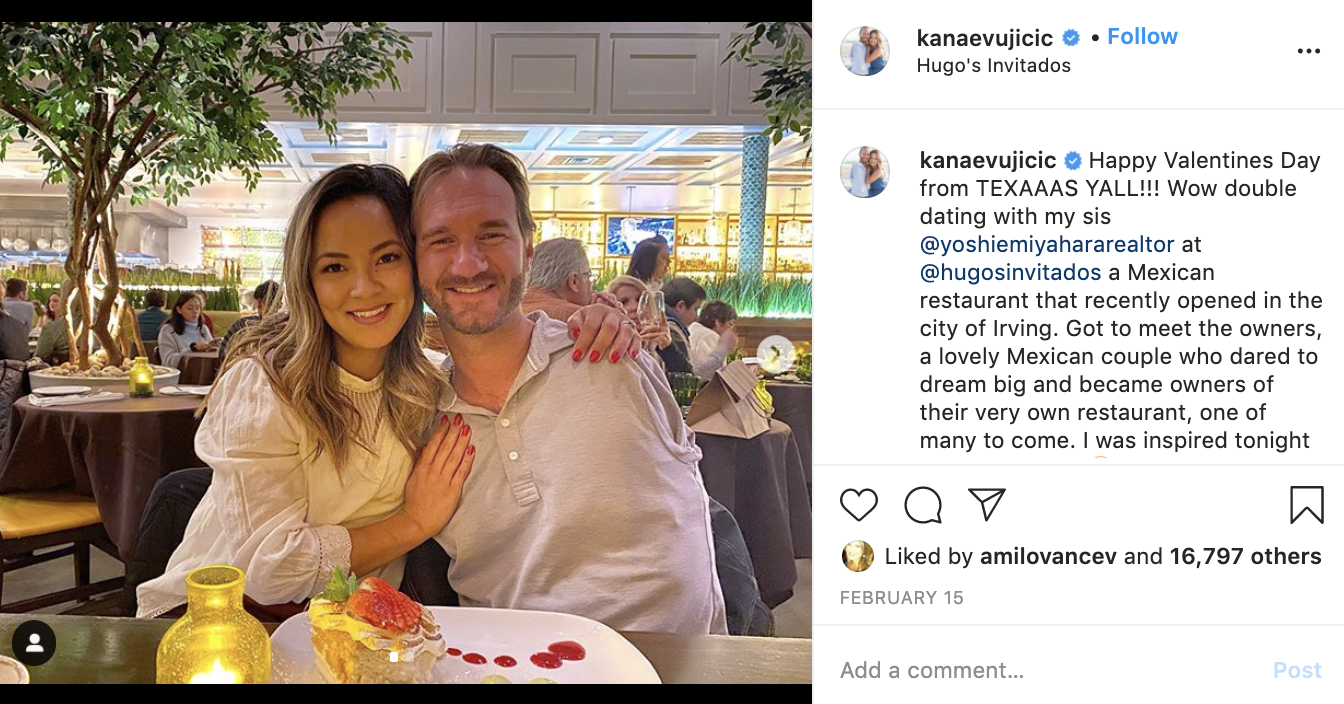 He made the bold move of giving his e-mail address to Kanae to stay in touch. Did you know that Kanae initially declined his request and said she would get his contact details from the person who invited them to the talk? Nick admitted he was a bit disappointed that he couldn't have direct communication with her at the start.

They got married on February 12, 2012, and now have four children – sons, Kiyoshi James and Dejan Levi and identical twin daughters Olivia Mei and Ellie Laurel.

We've gotten a glimpse of Nick's full and prosperous life, now let's take a look at the woman who has made his life complete. 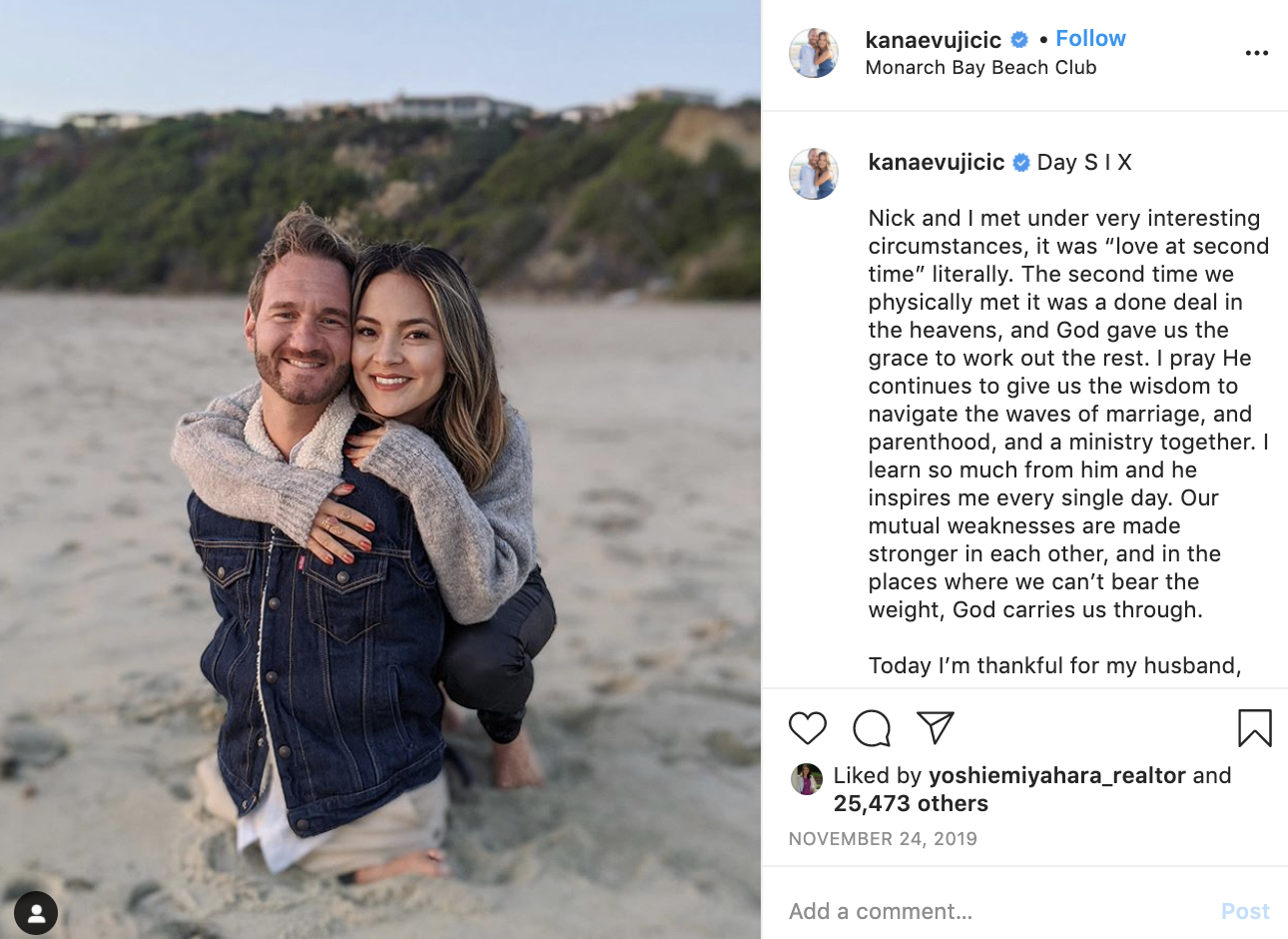 Kanae accepted Nick for who he was and overlooked his deformity. She saw and accepted him as a husband and has been supportive of the family. She made him a proud father of four kids, too.

While others gain popularity through career achievements or vast fortunes, Kanae gained her celebrity status through her marriage to a celebrated and inspiring man.

Until today, Kanae's actual year of birth is unknown, although she celebrates her birthday every year on December 20. 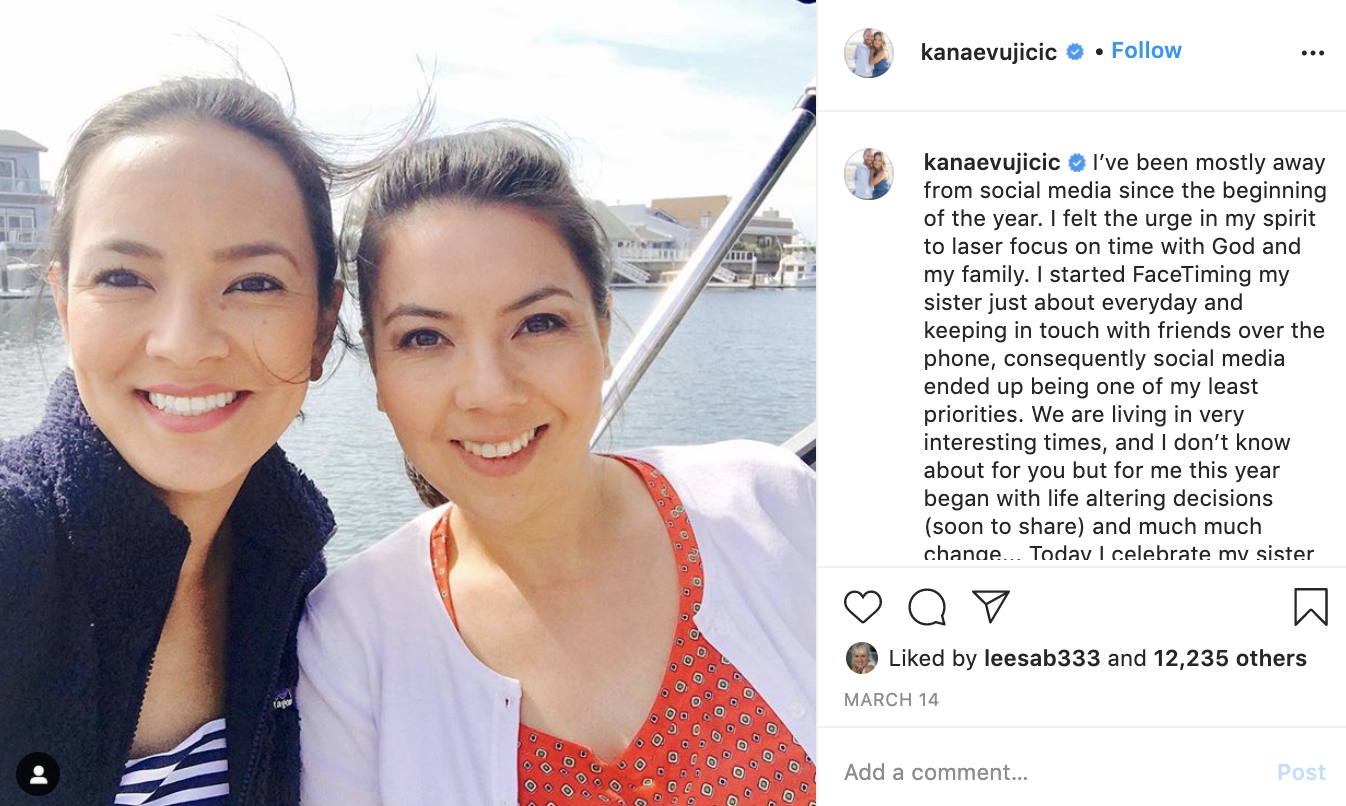 Kanae was born in Mexico but eventually relocated to Texas. Her father is Mexican while her mother, a Japanese. Her only known sibling is Yoshie.

It is known that Kanae is a full-time mom, providing complete care and support for her favorite beings. It has not been confirmed that she engages in other activities or businesses and generates her own income. Supposing, she shares net worth with Nick, then they would be worth around $500,000.

7. She homeschools the kids 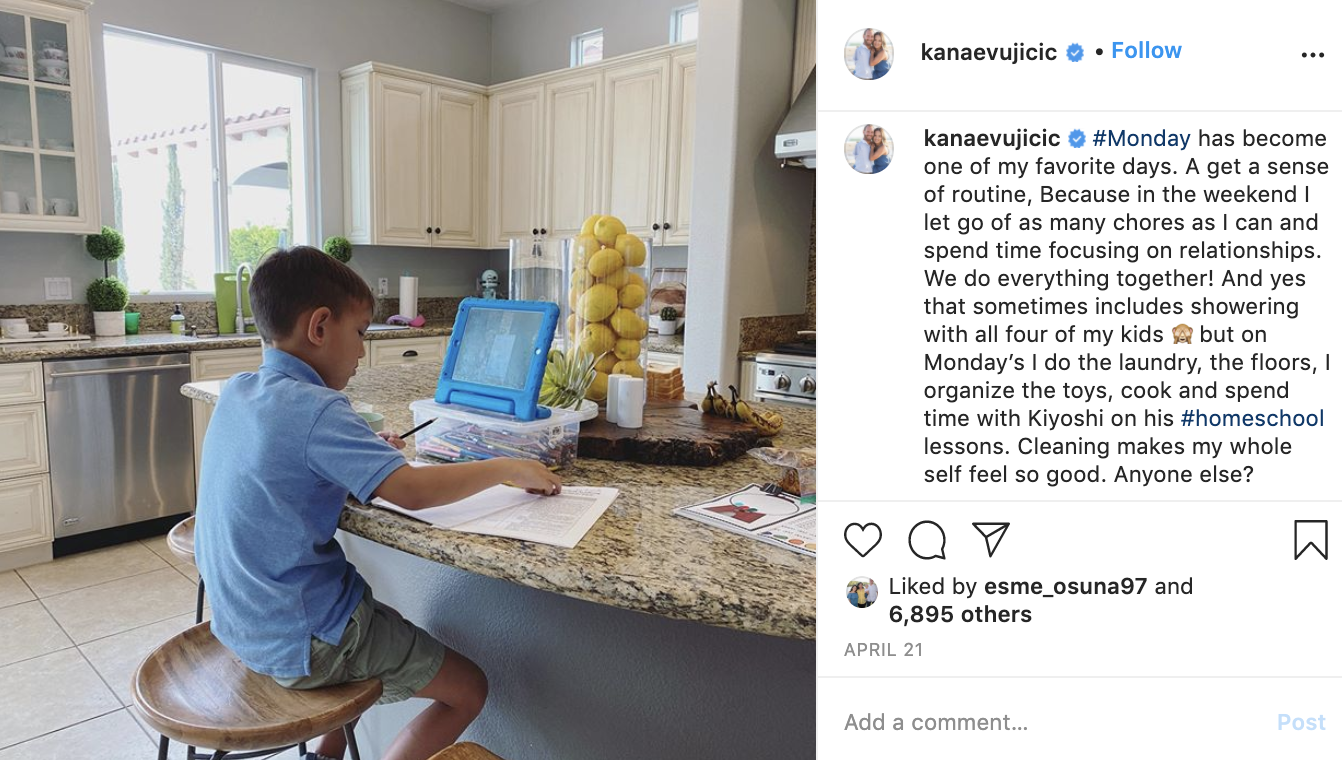 Kanae has posted in her social media handles that at least one of the kids are homeschooled. She also sends encouragement to all the other parents out there who follow the same approach.

8. She cuts her kids hair 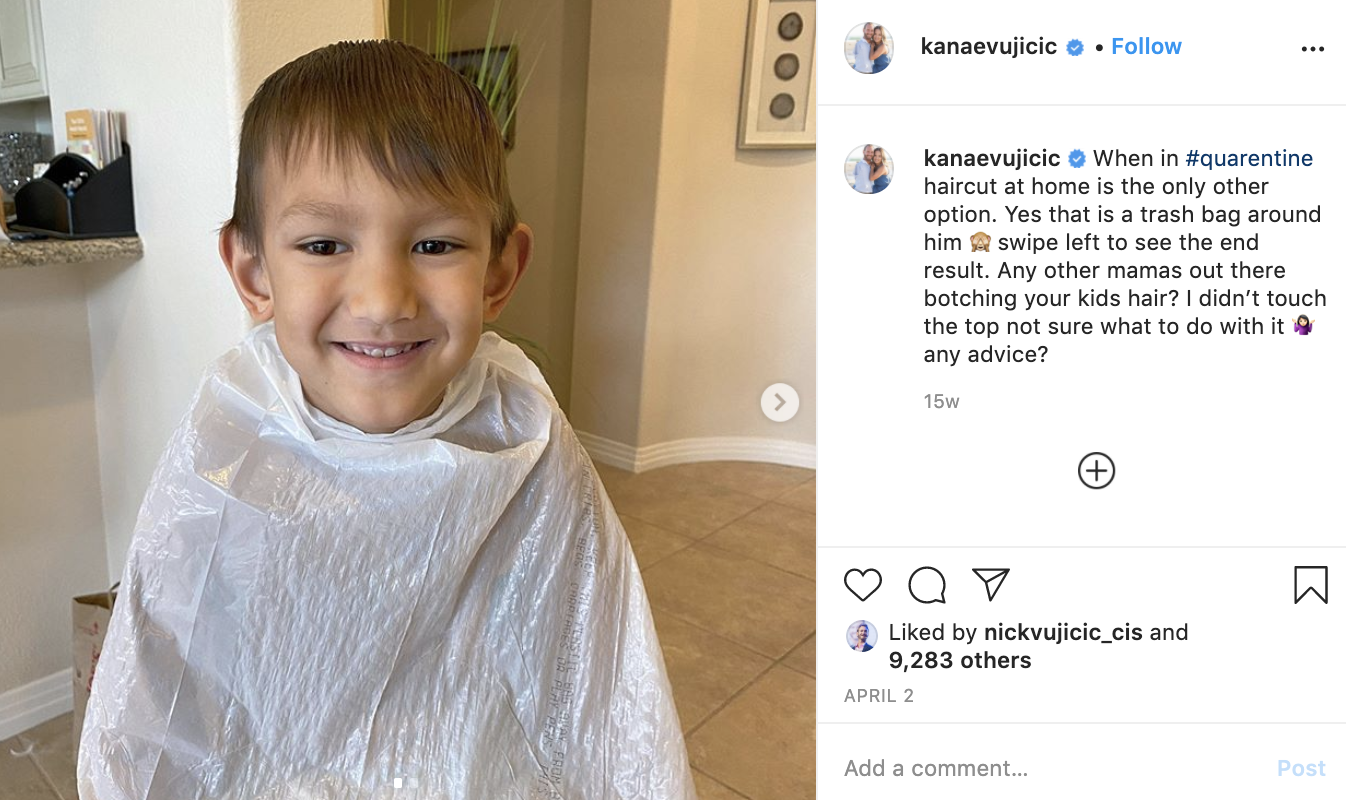 "When in quarantine, a haircut at home is the only other option," shared Kanae in one of her posts on April 2. The end result wasn't bad, and many agreed.

9. She lets the kids take control 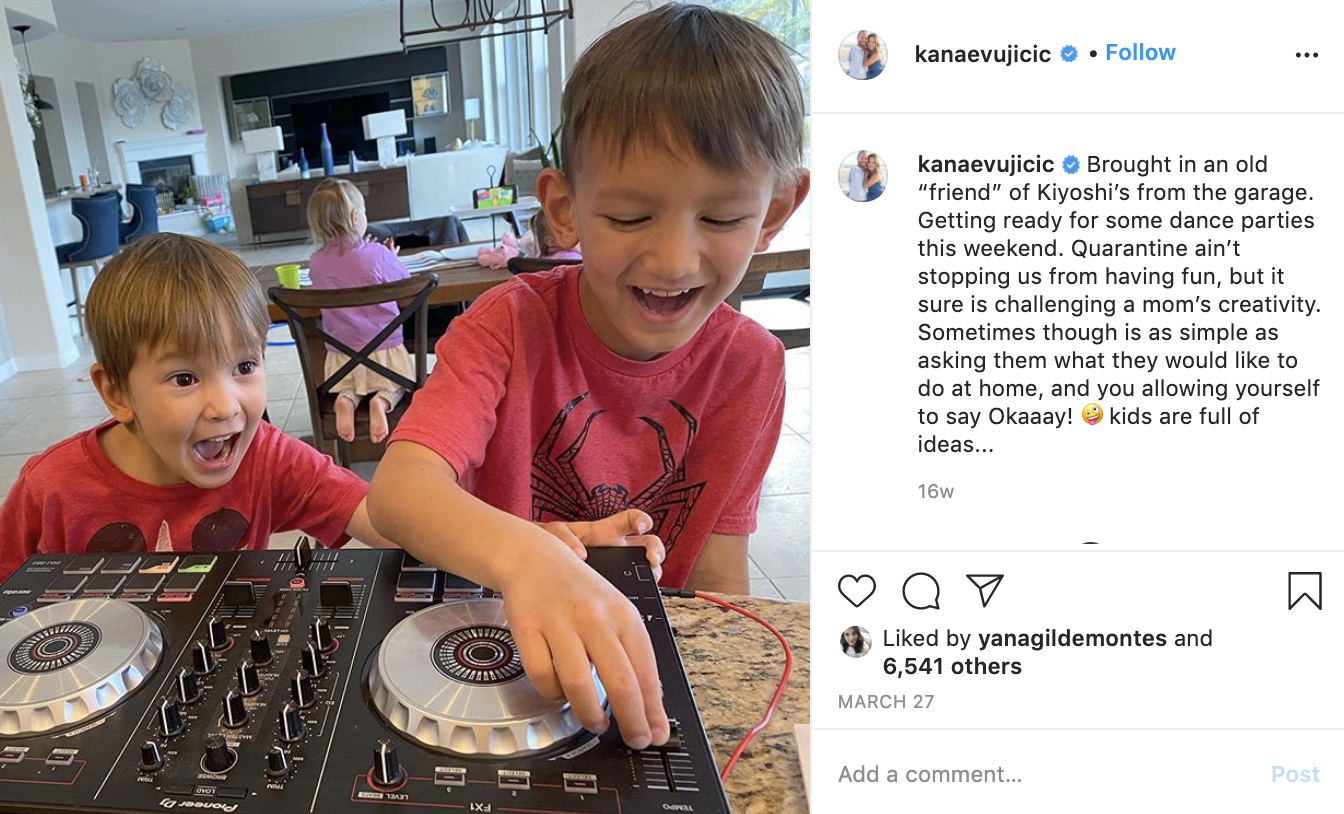 Kanae mentioned on March 27 that the current pandemic hasn't stopped her and the family from having fun. "But it sure is challenging a mom's creativity," she noted. "Sometimes though it's as simple as asking them what they would like to do at home and you allowing yourself to say 'Okaaay!'"

A source claimed that Kanae was a model; however, she has neither confirmed nor denied the fact. In all her interviews, Kanae would barely talk about her past. 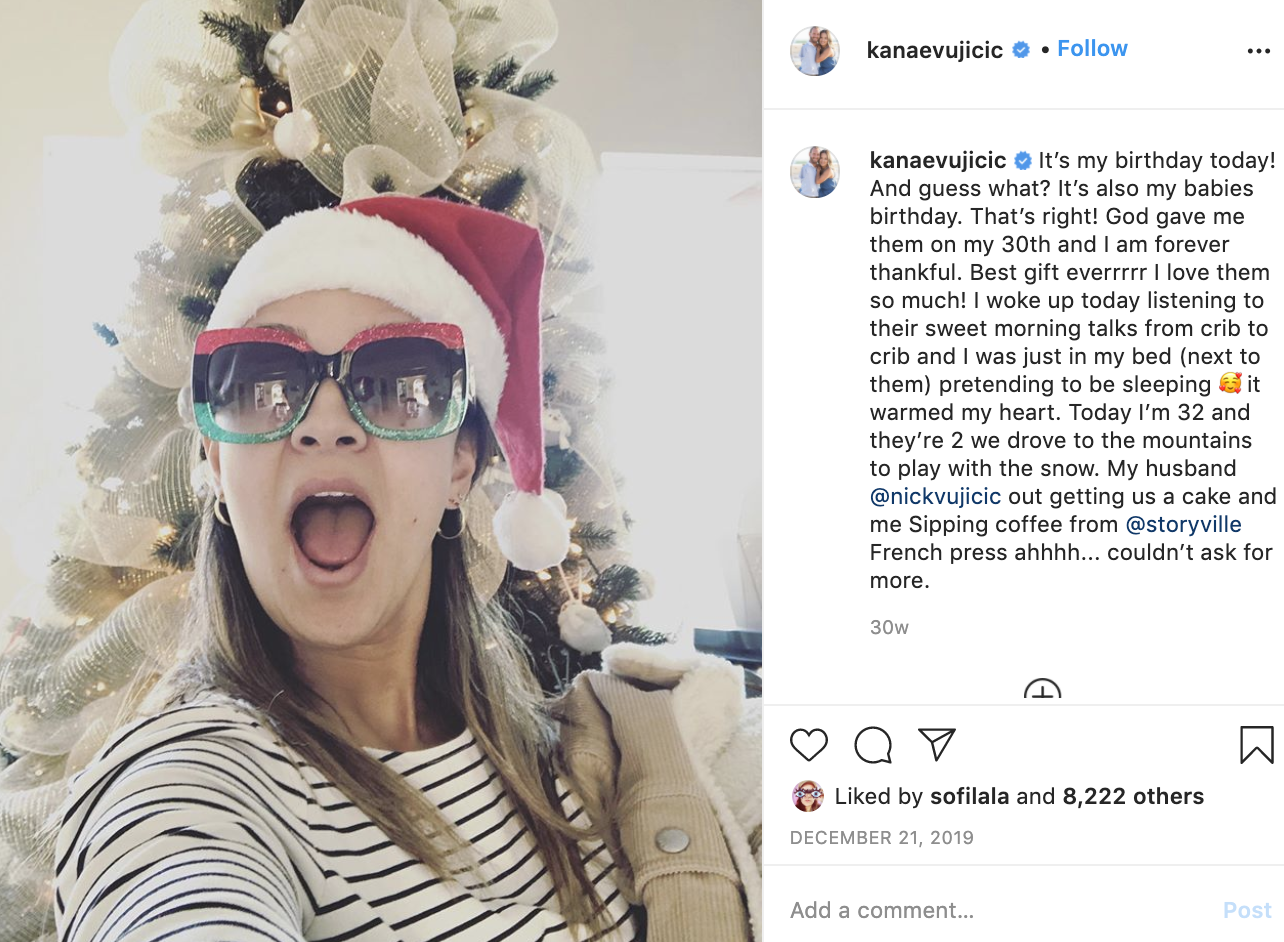 Just by how she met her husband and how she expresses herself online and offline, it can be said that Kanae is an outgoing woman.

12. She does all the heavy lifting in the family

Nick admitted that Kanae has her hands full in juggling the family and does all the heavy lifting. There were moments when Nick was physically incapable of providing assistance, which brought him much stress. One example he gave was in handling the kids. Kanae's response? "I'm not done yet. This is what I signed up for."

Kanae has been spotted by Nick's side during his interviews and traveled with him across many countries for his talks.

14. Shows affection to Nick and the kids 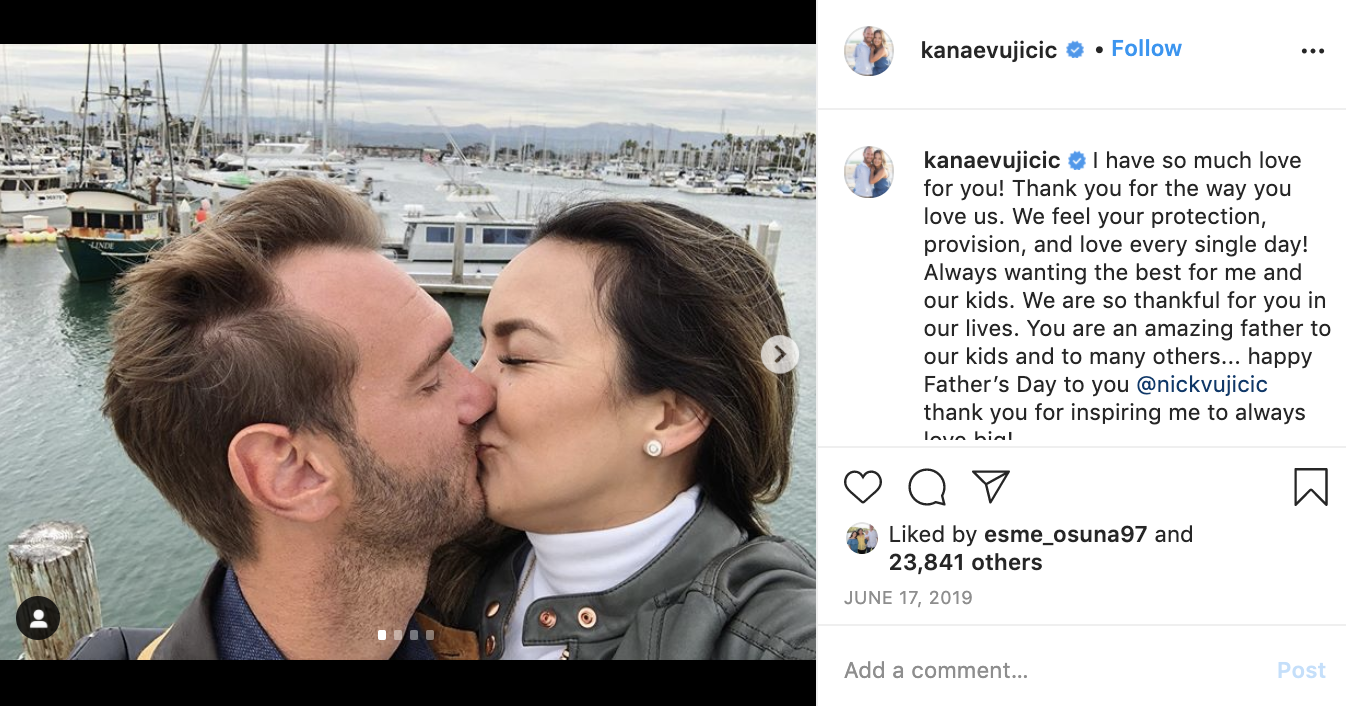 Scrolling through Kanae's social media accounts, one would confirm that she is not ashamed of expressing her affection and love for the kids and Nick. They would hug and kiss in front of the camera, and you would feel that the sentiments were genuine.

15. She is Nick's answered prayer and a dream come true

Early on in his career, Nick was asked what his dreams were. He said it was to fall in love and to have a family. He has that now, and more. As for Kanae, she mentioned that she was living the dream that she didn't know she could even dream. Their love for each other and their family was a "beautiful surprise."

What is She Up to Currently 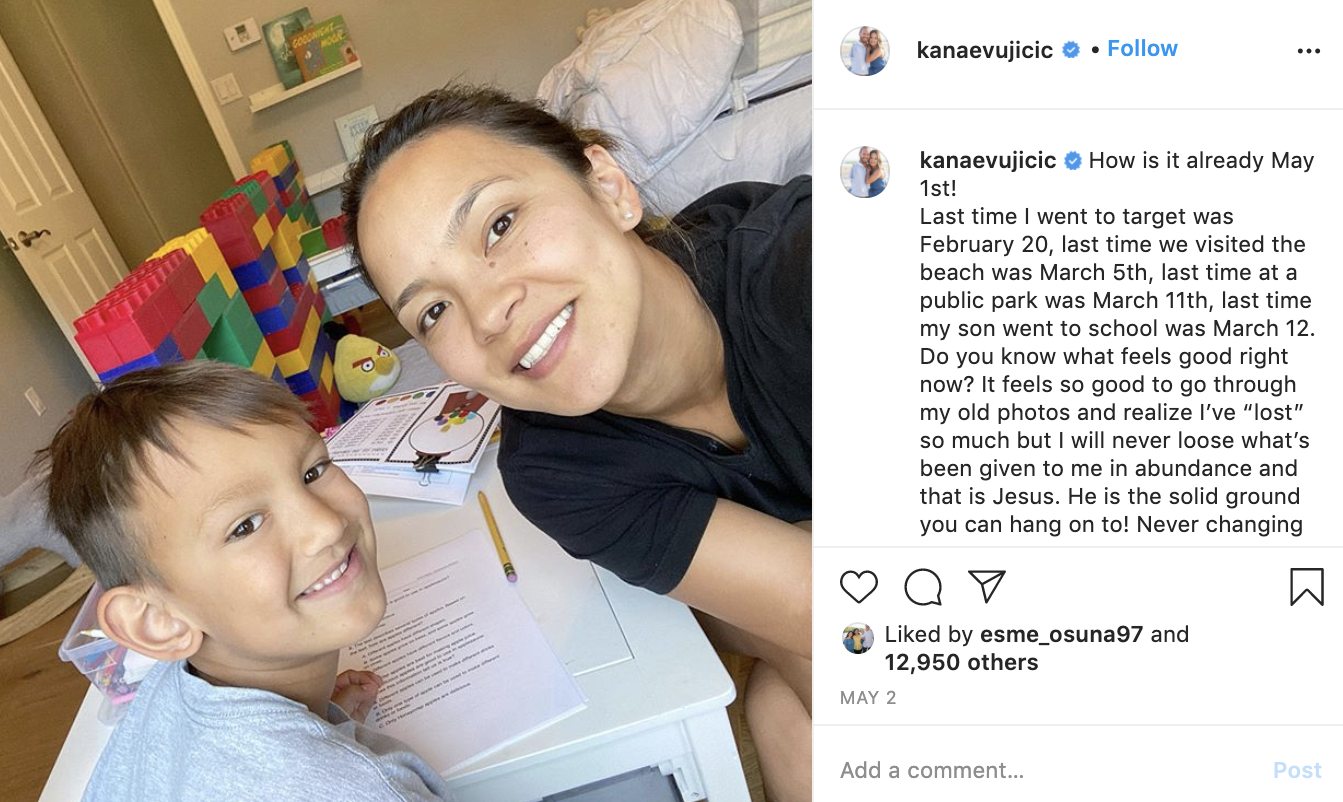 Based on her social media updates, Kanae has been busy with her family. With the ongoing crisis, she has posted sneak peeks to her homeschooling schedule with the kids. She made a shoutout to all the mamas out there on May 2 that they only had a few more weeks to go with the home-based learning setup. 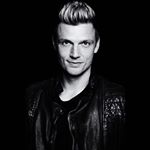 The story of Kanae and Nick is definitely one for the books, meant to be shared and taken inspiration from. She is a strong-willed and remarkable mom and wife who clearly sees beyond outer appearances and spots the beauty inside everyone. And with such a gem of a personality and character, it's not difficult to see that Kanae is a respected woman.