The pop music genre has changed drastically in the past decade. The times are changing and the start of a new decade has music lovers craving something different. With a new set of demands for music, fresh voices were introduced. Among these was the talented and unique personality of Billie Eilish. A few years ago, not many had heard her name. But now, with a little under one billion streams of her song “bad guy,” Billie Eilish is no longer a small indie artist. She is currently one of the most successful artists in the pop music industry and you will not believe how old she really is! Keep reading to find out.

Fact 1: Who is Billie Eilish?

Billie is an A list musician born in Los Angeles, California. In an interview, she stated that she has been writing songs since she was just around eleven years old. It was based on the popular television series, The Walking Dead. So, it is safe to say Billie has had a passion for music and songwriting since she was a child.

The first time this artist put out her music for the world to see was in 2015. She wrote a song with the title “Ocean Eyes” and uploaded it to the streaming platform, Sound cloud. She wrote and even recorded the song in her childhood bedroom. Her brother, Finneas O’ Connell, played the guitar while Billie used her voice to make the song a hit. Billie has a wonderful relationship with her brother and even after gaining all this fame and success insists on him performing alongside her.  The song (Ocean Eyes) gained a lot of popularity and so she released her debut EP, that is, Don’t Smile at Me. At this point, she was still not a well-known artist.

Her fame and popularity really started growing at an exponential rate after she released, her second album, “When We All Fall Asleep, Where Do We Go?” The American pop star mentioned in an interview on Jimmy Kimmel:

“There were fourteen songs on the album. One of the goals I had was that I wanted to make an album that I could put fourteen people into a room and each had fully different tastes. And that if I played them my album, each person would like at least one song.”

This kind of broad and open approach is what led to her fame. She presented something entirely new to the world of pop music and reformed the entire genre away. She has so much to offer that even people whose music taste is nothing alike can find common ground on Billie’s album.

This charming and unique celebrity’s success is something almost all aspiring artists dream of. And yet Billie is currently only 18 years old. There have been certain misconceptions regarding Billie’s age but officially it is recorded that she was born in the year 2001, making her of legal age today. We can’t even imagine accomplishing such global recognition before even becoming an adult. Billie has the honor of being the youngest artist to win the four main categories of the Grammy Awards.

At the age of 8, she joined a choir and felt very much at home. She released Ocean Eyes when she was just 14 years old! Can you imagine that? Not only has she managed to get a multitude of awards, but she has also even broken two Guinness World Records. She very humbly attributes her fame and talent to her parents and the fantastic job they did in raising her. Billie’s mother and father were a teacher and a construction worker respectively. But they had a passion for music which they encouraged into their two children from a very early age. She and Finneas were homeschooled, so she had a lot more time to focus on her other talents and not just academia.

Fact 3: What does Billie Eilish do outside music?

Even though music is her main passion, Billie has shown interest in a wide range of arts. Since a young age, she enjoyed taking creative photos and videos. She would arrange rocks, animal figures, leaves, and other random objects in her backyard and photograph them. She had a keen eye and made some music videos to songs she liked as well. Another interest of hers was dancing. She loved to express herself through dance and joined some classes in her home town as well. Whatever she went through, she used to dance as an outlet to express herself. Unfortunately, she suffered an injury and had to quit dancing. This devastated her but eventually, Billie learned to cope with it.

When she turned 10, she grew fond of horses and horse riding. At the time her parents were unable to afford it. So, she volunteered to work at the stables just so she could be able to ride the horses.

Fact 4: What does Billie Eilish struggle most about in the music industry?

Billie is one of the few artists who have been completely open in regard to their mental health. This 18-year-old musician has had to face some serious struggles with depression. She clarified that it first started when she was forced to quit her passion for dancing at age 13. Depression is not something that is easy to cure but she has been on the journey for a while and assures fans that she is trying her best to take care of herself.

Gaining such a huge audience at a tender and young age couldn’t have been easy. With the whole world watching her every move when she hasn’t even finished growing up yet, there was a lot to deal with.

Tourette syndrome is a disorder of the nervous system. People living with the syndrome experience random tics. These may be in the form of muscle twitching and spasms. These do not last for long periods of time but the individual repeats the movement and it is out of their control. The condition is actually fairly common and for such a popular figure to choose to not hide her struggle is praiseworthy. When she appeared on The Ellen Show, she discussed it in the following words:

“It’s something I’ve lived with my whole life. Like, my friends, my family, everybody closest to me knows I have it. And it’s not anything different. And I just never said anything because I didn’t want that to define who I was.”

The mainstream singer also has an extremely rare condition called synesthesia. It is a blending together of the five senses. This means she can ‘see’ sounds and ‘hear’ colors etc. Sounds like a superpower to me! Another celebrity that she shares this condition with is Lorde. Lorde has been open about her condition for quite some years now. While some people may think this syndrome is made up, there is scientific research to back up the experiences and claims of people living with synesthesia.

Fact 6: What does Billie Eilish advocate for?

Billie Eilish has been blessed with a global platform consisting of millions of people. Therefore, it is her duty to use this platform wisely and she has. In 2020, the conversation about the Black Lives Matter movement resurfaced. She showed her support for the movement with enthusiasm through Instagram posts. She raised awareness on the issue as well as provided some resources to her fans so they can help the movement as well.

She has also been an advocate for the body image of women in the industry. In today’s world, female celebrities are encouraged to ‘show more skin’. In a society that tends to value a woman’s body and looks over her talent and skills, Billie Eilish decided to be a role model with a different approach. It was almost impossible to find a picture of her in a revealing outfit. She preferred to wear baggy clothes. Recently she performed on stage and gave a powerful speech on the over-sexualization of women’s bodies in the industry. She made clear that the world’s opinions of her were “not my responsibility”. Yet another time she talked about her own body image and preferences was in an ad for Calvin Klein.

“I never want the world to know everything about me. That’s why I wear big baggy clothes. No one can have an opinion because they can’t see what’s underneath.” 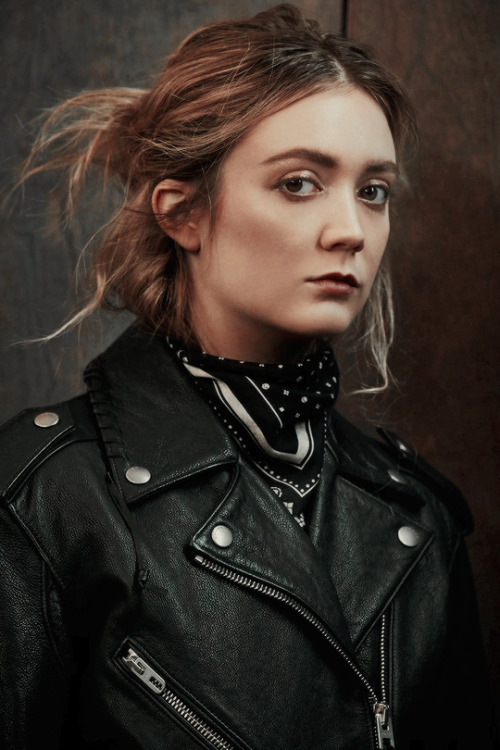 Billie Catherine Lourd is the daughter of the late Carrie Fisher. An actress in her own right, she shows us just how talented she is. Here is her bio.

Billie’s most recent song titled “my future” has led fans to believe that her mental health has improved and that she is doing much better than she was a year or so ago. With a net worth of approximately 6 million dollars, this 18-year-old is just getting started in her career. She has a long way to go and we can’t wait to see what she does next.