The "Top Gun" Actor has come out against sexual predators in Hollywood.

As more and more people in the entertainment industry have come out to voice their allegations against former colleauges or bosses- Edwards has taken this as a chance to speak on the trauma he alleges happened when he was 12. He speaks at length about his experience as a vulnerable kid and how he felt the accuser took advantage of the situation and took advantage of his trust and betrayed it. Edwards joins a chorus of voices surrounded by the hashtag #MeToo to share their stories of survival of trauma and assault at the hands of managers or people that used their positions of power to hurt others.

Edward's speaking about his vision. 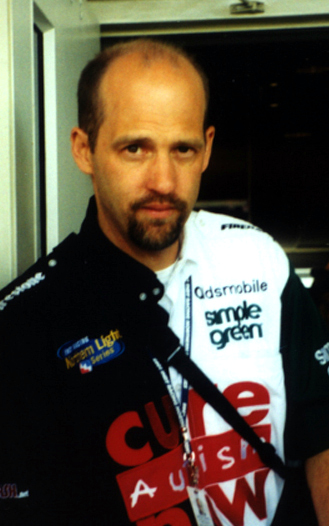 Anthony Edwards at the 2002 Indianapolis 500

With the approval of his parents, Edwards began to act just before graduating high school at San Marcos High School. Soon he was attending acting workshops and classes, and it all led to a pursuit of an acting degree at university at the University of Southern California. Unlike many young actors in his position- relatively new and trying to make it- he was quickly given the opportunity to start working. Within one year of his studies at the University of Southern California, Edwards was so in demand and able to get parts that he was able to drop out and search for bigger roles. He went on to perform in the movie "Fast Times of Ridgemont High" which reached a large audience and propelled his fame to later land roles on "Zodiac," "Top Gun," and his staple charachter of Dr. Mark Greene on the show "ER."

Fans of "ER" remember the scenes outside of the hospital on the dinky outdoor hoop. Here, the doctors caught up on things, talked about nothing, and sometimes about everything. But this wasn't written this way. The idea came to Clooney one day as a way for the crew to de-stress and move around on their time off, and soon the directors liked the idea and feeling so much that they decided to incorporate it into the show- allowing the actor's real down time activity to form the setting for the relaxed and introspective scenes that occurred underneath that little basketball hoop. This little idea may have ended up with much larger consequences as Edwards was highly awarded for his role in the show. He would go on to receive nominations for an Emmy in the category of Outstanding Lead Actor in a Drama Series for "ER". Edwards went on to win an Emmy as an executive producer. Edwards has also been presented with a People's Choice Award for Favorite Male Performer in a new Television Series in 1995. He has won various Screen Actors Guild Awards; six in total. Apart from this long list Edwards was also given the Golden Globe award for Best Performance by an Actor in a Television Drama in 1998. All starting from a basketball hoop!

Here the co-stars are chosen to present to present the Emmy for Outstanding Lead actors in a Mini-Series or Special.

Many of his decisions are made with consideration for the "greater good."

When his character Dr. Mark Greene was killed off of the hit TV show "ER" fans were left reeling that the charismatic doctor they had gotten to know so well was gone. The truth is that he left the show for a good reason, stating that he wanted to have more time to spend with his kids, stating that "There's really no point in having children if you're not going to be home enough to father them." There really wasn't enough money to convince the actor to shirk on his familial life.

When he was given an unexpected bonus during his time on "ER" he decided to use the check to help out the community and kids by donating to renovate their theatre and help bring money to the performing arts department. It wasn't billions of dollars, but it made a difference. In addition to this, he is on the Board of Cure for Autism Now Foundation.

Anthony Edwards has put on many hats as an actor, and has reached wide fame and appeal for his portrayals. From drama productions in high school, to landing small parts in films out of college, Edwards has not stopped working to accomplish his goals. Once he had reached the spot that billions of people wish to be in, he gladly gave it up- along with the chance at making much more money- to be with his family and spend time with those that he loves. Although he will be remembered for his big roles like "Goose" and his role in "Revenge of the Nerds," he may end up being just as remembered for his social justice advocacy and his charity efforts. Edwards may have passed the point of fame and stardom that many people wish about, but with grace he has handed off the baton and ventured into other realms. With his recent stories and writings, Edwards is showing that he is using his power for good in the community, shedding light on underreported topics.