Eugenia Jones was born in the year 1944 in the USA. Formerly, she was a model in Arkansas in the United States. Some people call her Gene, which is her nickname. Much information is not revealed about her family and education background. Eugenia Jones is a very charitable woman. She likes getting involved in social service activities, an interest she developed while still young. This attribute has enabled her to donate trust funds to help the less fortunate medical students. Hence, she is loved and respected by those she helps. Eugenia Jones is the wife of multi-billionaire Jerry Jones, who is a businessman and the owner of Dallas Cowboys, which deals with football. Jerry Jones is also a 2017 Hall of Famer inductee; in his induction speech, he gives much credit to his family and the Cowboys team and supporters for their contribution towards the success of the club. Eugenia Jones and Jerry Jones got married in the year 1963 and are together until now. The following are the facts you need to know about Eugenia Jones, Jerry’s wife:

1 Eugenia Jones is a reserved woman 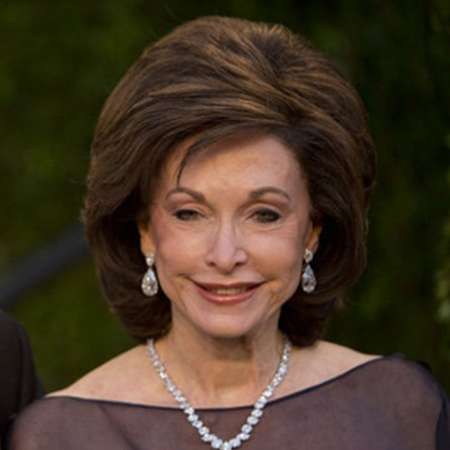 Eugenia Jones and her husband Jerry Jones have been happily married for over five decades. Very few people have managed to stay focused on their marriages. However, their marriage has not been a walk in the park. At some point, her husband Jerry Jones had strife when photos of him with some strippers emerged in the public domain. Nevertheless, Mrs. Jones managed to keep her cool. She further said that Jerry Jones should enjoy his life as he pleases. It is her commitment and love for her family that has kept her all this time in her marriage. She also speaks highly of her husband as the partner who helps her in decision-making and most of all understands her.

Eugenia Jones has made noteworthy achievements in her line of work. She is passionate about her art, education, and making her collection accessible to everybody. She is also a member of the Cultural Trust Board of Texas, and she has worked at the Meadows School of the Arts as a co-chairperson. Through her leadership, she ordered artists to create various specific artworks for the AT&T Stadium to enhance the fan’s experience in the stadium. This collection of art has made the Dallas Cowboys popular among many people. Dallas Cowboys Art Collection has become very prosperous not only through the efforts of Eugenia Jones but also by the support from her husband.

3. Jerry Jones met his wife Eugenia on a blind date 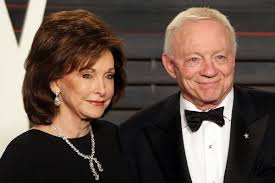 Jones met his wife Eugenia at the University of Arkansas. She was in her first year at the University, and Jerry Jones was a football captain. It was at the university that they met on a blind date. Eugenia constantly heard her friends praising Jerry Jones, but she had no idea who Jerry was. Therefore, Eugenia requested her friends to accompany her on her first date. Jerry Jones and Eugenia Jones had dinner together, and afterward, they joined their friends at a state fair. While other men were winning their dates teddy bears, Jerry Jones did not manage. However, he went ahead and bought her one. This was the beginning of their dating life as they ended up in marriage years later. 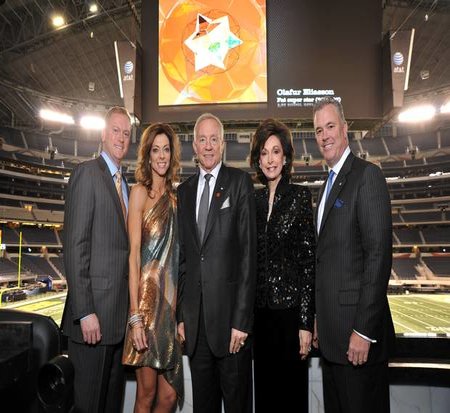 Jerry Jones and his wife are blessed with three children-two sons and a daughter namely: Stephen, Charlotte, and Jerry Jr. Eugenia Jones is blessed with many grandchildren from her three children. Stephen, the oldest son of Jones, is a graduate of the University of Arkansas with a degree in chemical engineering. The 53-year-old is the Cowboys’ Executive vice-president and Chief Operating Officer. He also serves as the Player Personnel director. Stephen is married to Karen. Together, they have four children namely: Jessica, Jordan, Caroline, and John Stephen. Charlotte Jones, at the age of 51 years is the only daughter of Jerry and Eugenia Jones. She graduated in the year 1988 from the University of Stanford. She is the Chief Officer in charge of Brand and happens to be the Vice-Executive president of the football business (Dallas Cowboys). Charlotte is married to Shy Anderson, and together they have three children, two sons, and a daughter. The two sons are Shy and Paxton while the daughter is called Haley. Jerry Jr. is the last born to Jerry and Eugenia Jones. The 47-year-old serves as the Chief Officer/Vice President in charge of Marketing and Sales. Lori is the wife to Jerry Junior, and they have two children, James and Mary Chambers. Eugenia Jones has a significant number of grandchildren indeed! Jerry Jr. once delivered a speech in which he talks highly of his father. He describes his father as a very caring and a good father who has helped him and his family by instilling the spirit of hard work and discipline through motivation.

Jerry Jones’ wife Eugenia Jones net worth is not clearly determined. Her career as an entrepreneur has brought her great income though not explicitly stated. However, in 2015 the family business had a net worth of $4 billion. Her husband Jerry Jones is estimated to be around $5 billion. 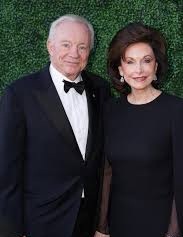