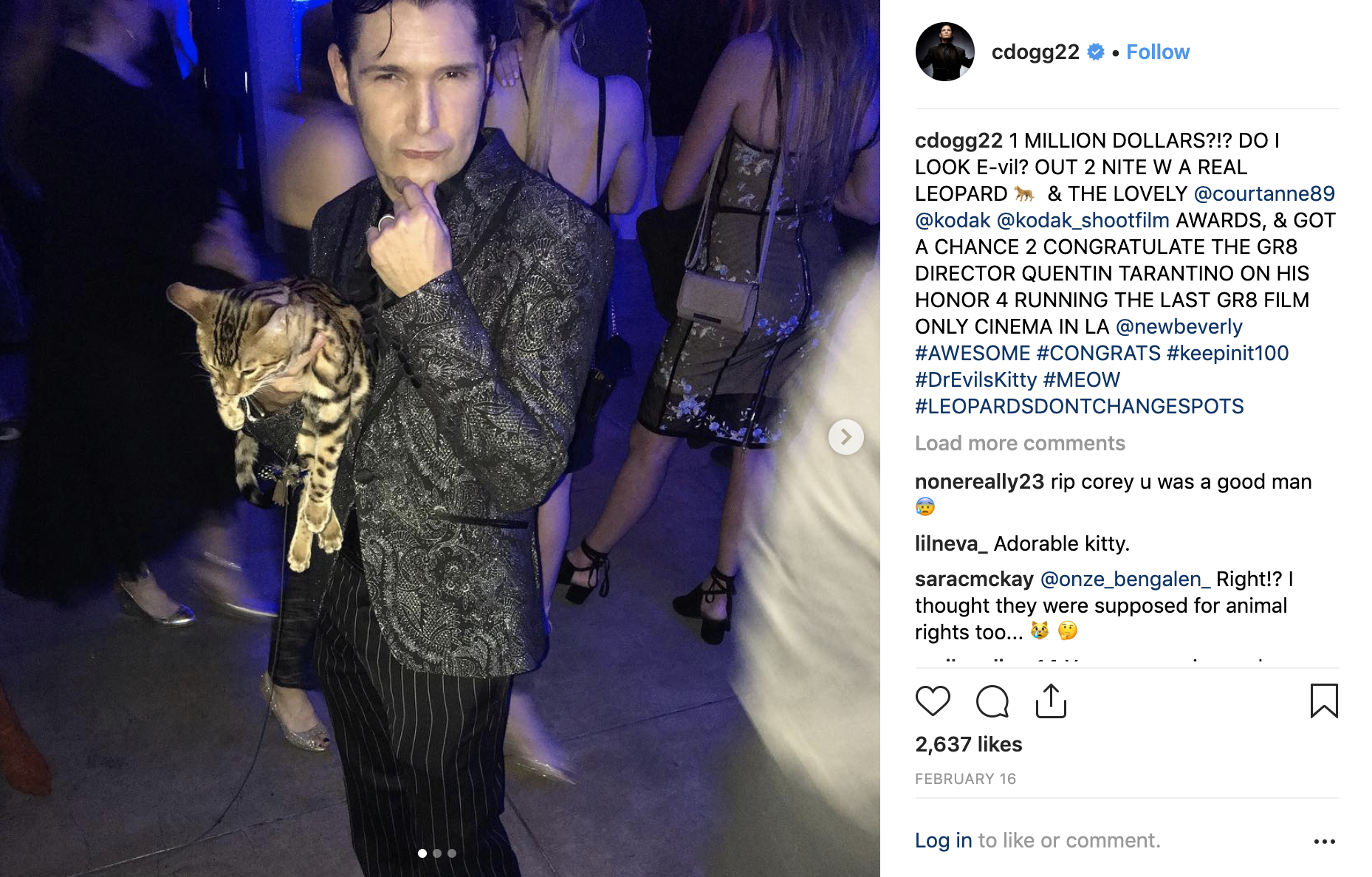 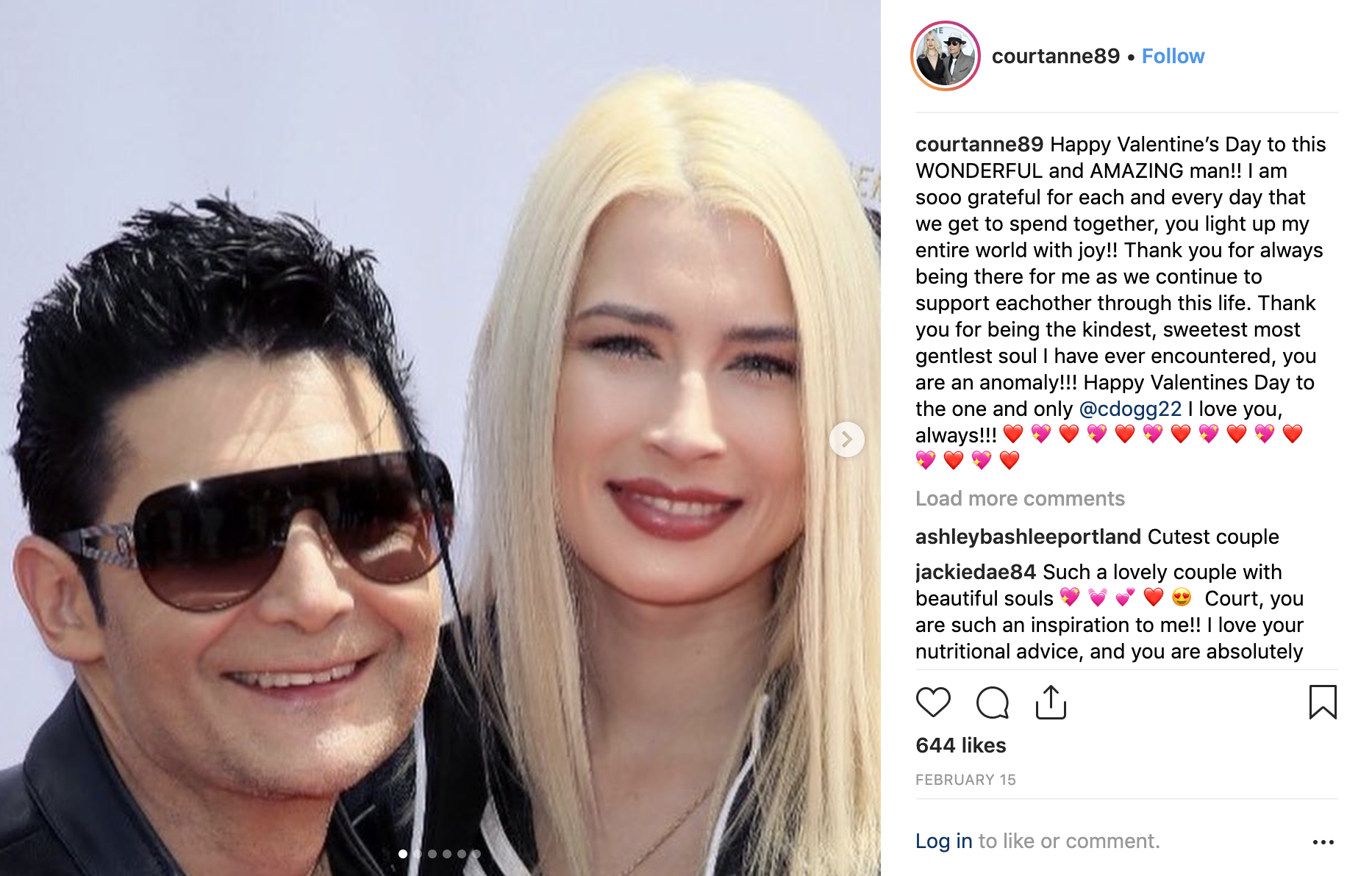 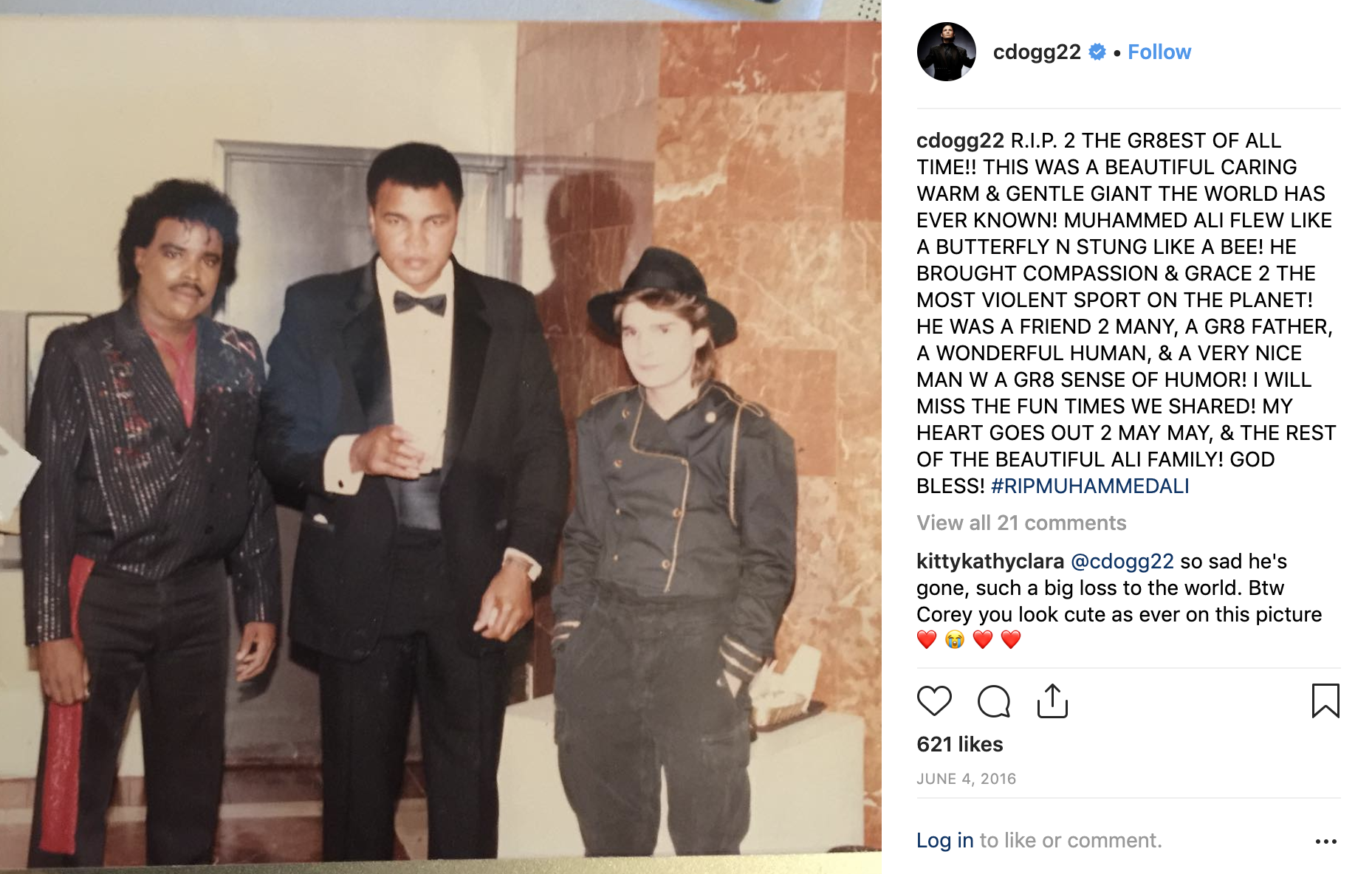 He once created quite a storm when he bravely appeared a guest on the Dr. Oz Show and named the men who had molested him as a child. He stated that he and his friend Corey Haim were victims of child abuse. Corey Feldman stated that a man named 'Ron Crimson' who worked as an assistant to his father. The same man also initiated his drug addiction. Corey Feldman has had a very troublesome childhood as a movie star and a child actor as he was constantly battling against child abuse. Many famous Hollywood personalities and other prominent figures seem to have molested him as a child. 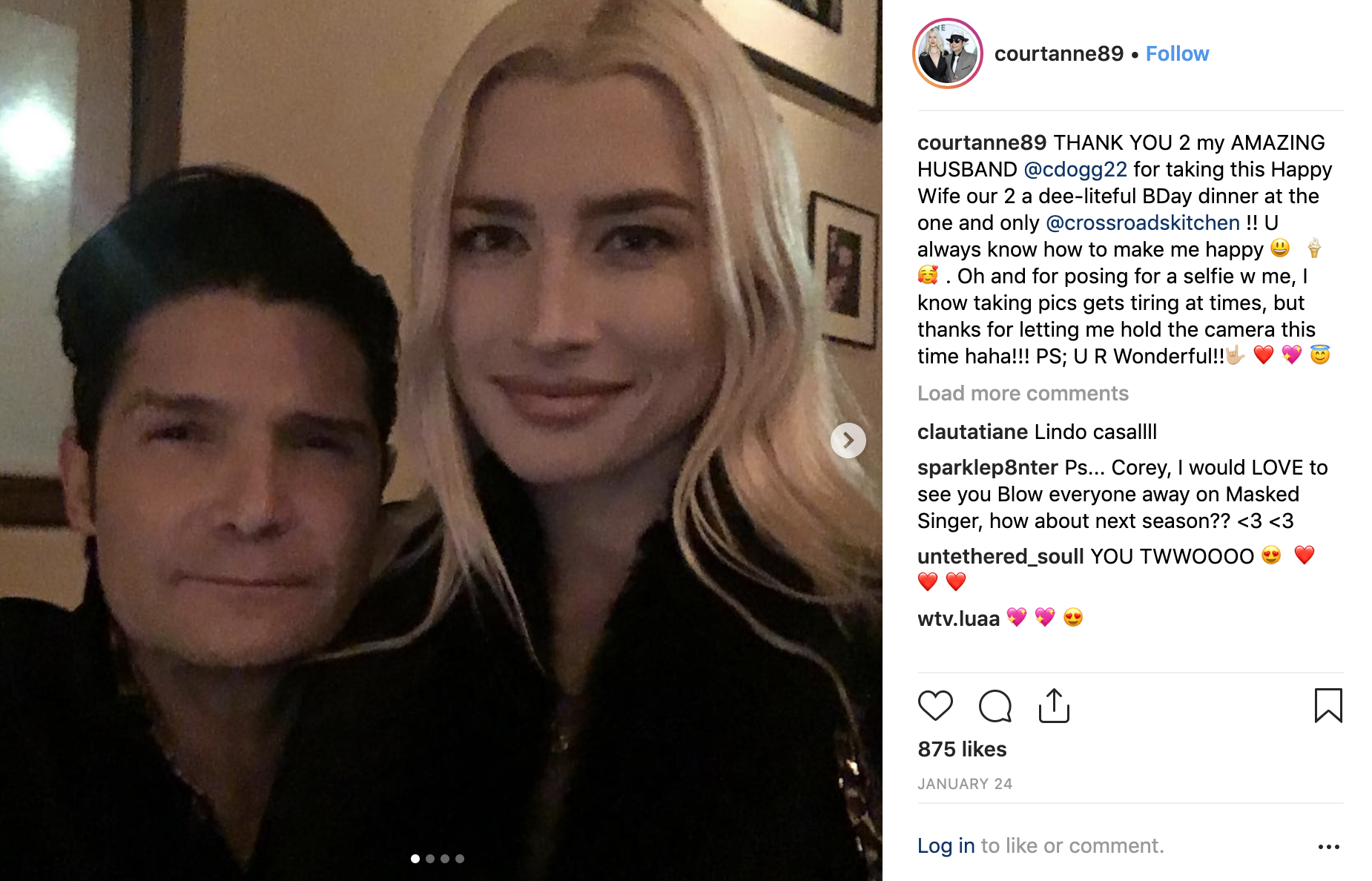 When he appeared in this show, he was bravely supported by a beautiful woman in the background. He was not only supported by her but also comforted by her through this tough ordeal. This beautiful 28-year-old model is Courtney Anne Mitchell. She is a Canadian actress and the third wife of Corey Feldman. Read on below to know why everyone adores Courtney Anne Mitchel: 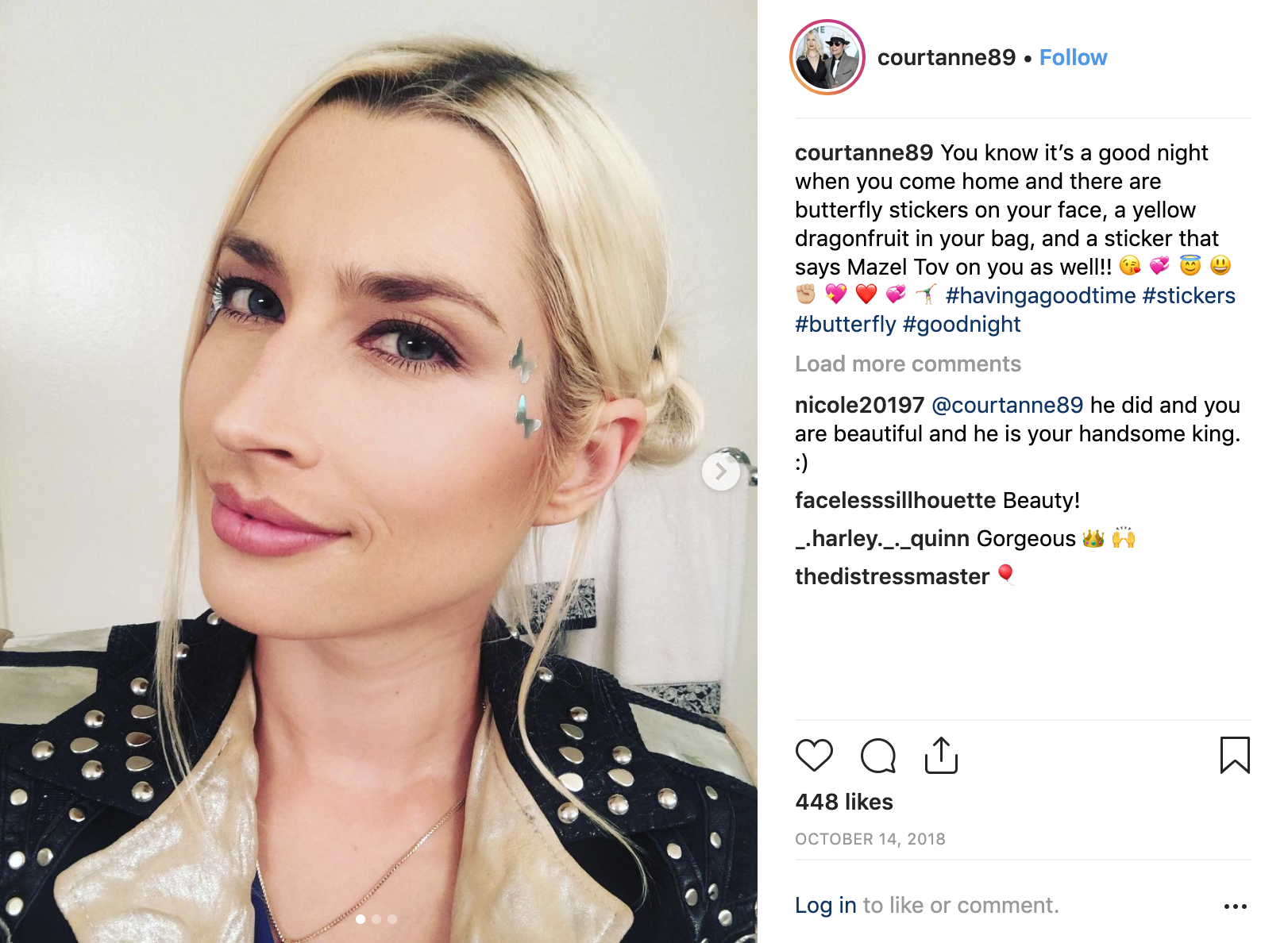 Courtney Anne Mitchell, the third wife of the famous child actor Cory Feldman was just 28 when she married in the year 2016. The two wed after a short, two-week engagement in the month of November. The two were initially anti-marriage, but after they exchanged their vows, the two were very excited to start their life as a married couple. Corey Feldman explained that he married Courtney Anne Mitchel because she was Canadian and he did not want Mitchell to get deported since Trump is in power currently. The marriage ceremony took place in Las Vegas at the Sir Elton John's Fizz Champagne Lounge in the famous Caesar's Palace. The duo does not plan to have kids so soon in their marriage, but Feldman stated that Mitchell gets a lot of practice as a step-mom to his son Zen whom he had with his previous wife Susie Feldman. 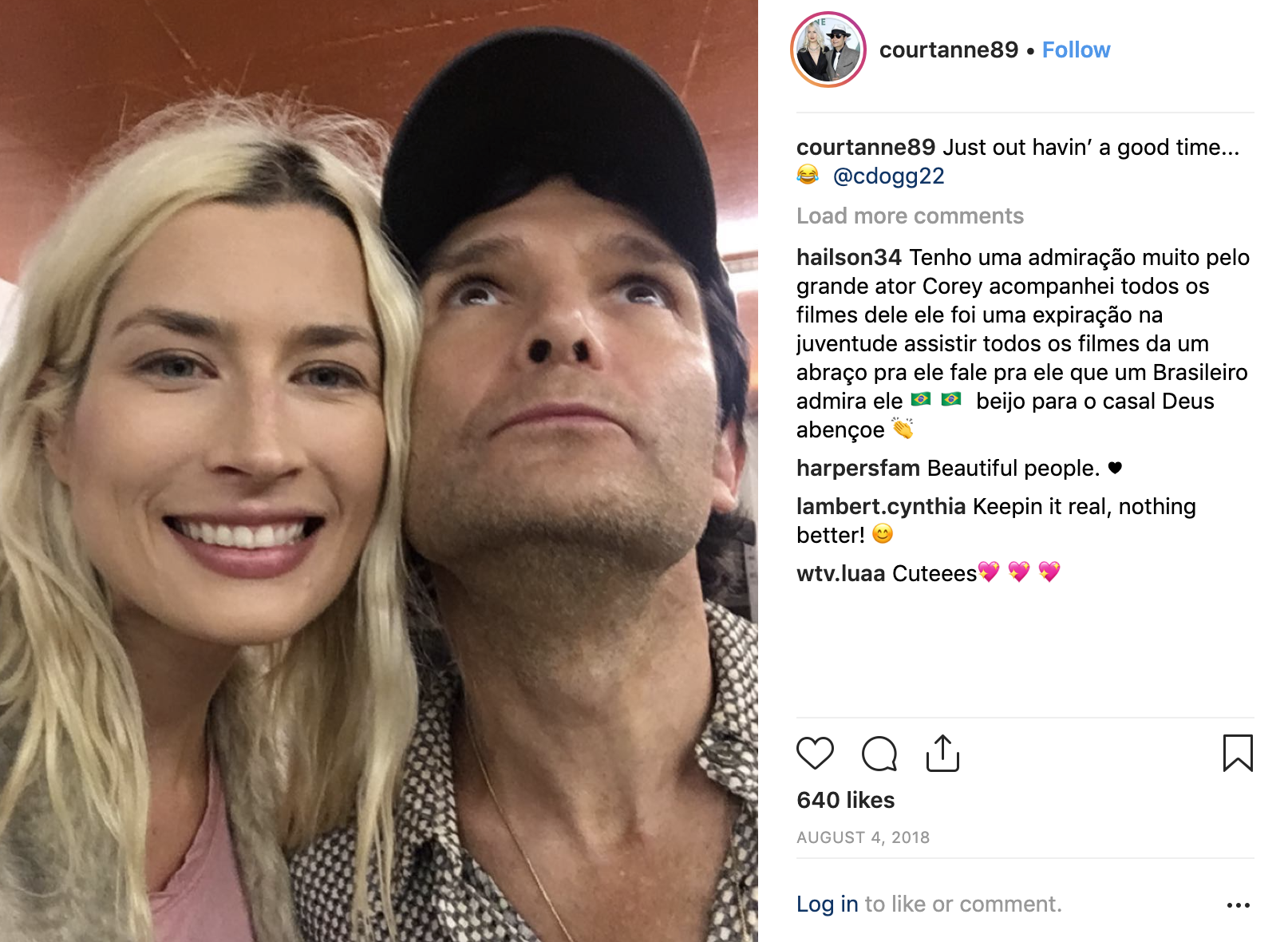 Feldman and Mitchell have together appeared on the TV show 'Celebrity Wife Swap'. The couple's performance together was much praised and appreciated by the critics and the masses. In this show, Feldman swapped his wife Mitchell with the comedian Tommy Davidson's wife for the sake of TRP ratings. One reviewer also said that upon looking at the episode it seemed that Feldman was running 'an all-girl sex cult.' Courtney Anne Mitchell in spite of being the third wife of Corey Feldman is head over heels in love with her guy.

Today, Feldman continues to fight against his childhood pedophilia in the media and she supports him in his battle. Together, they are fighting with petitions such as 'Cory's Law' to bring about awareness of child abuse. The adorable and stunning Canadian actress Courtney Anne Mitchell has a lot more to her than what is generally known. Read on further to know about some 5 interesting facts about Mitchell: 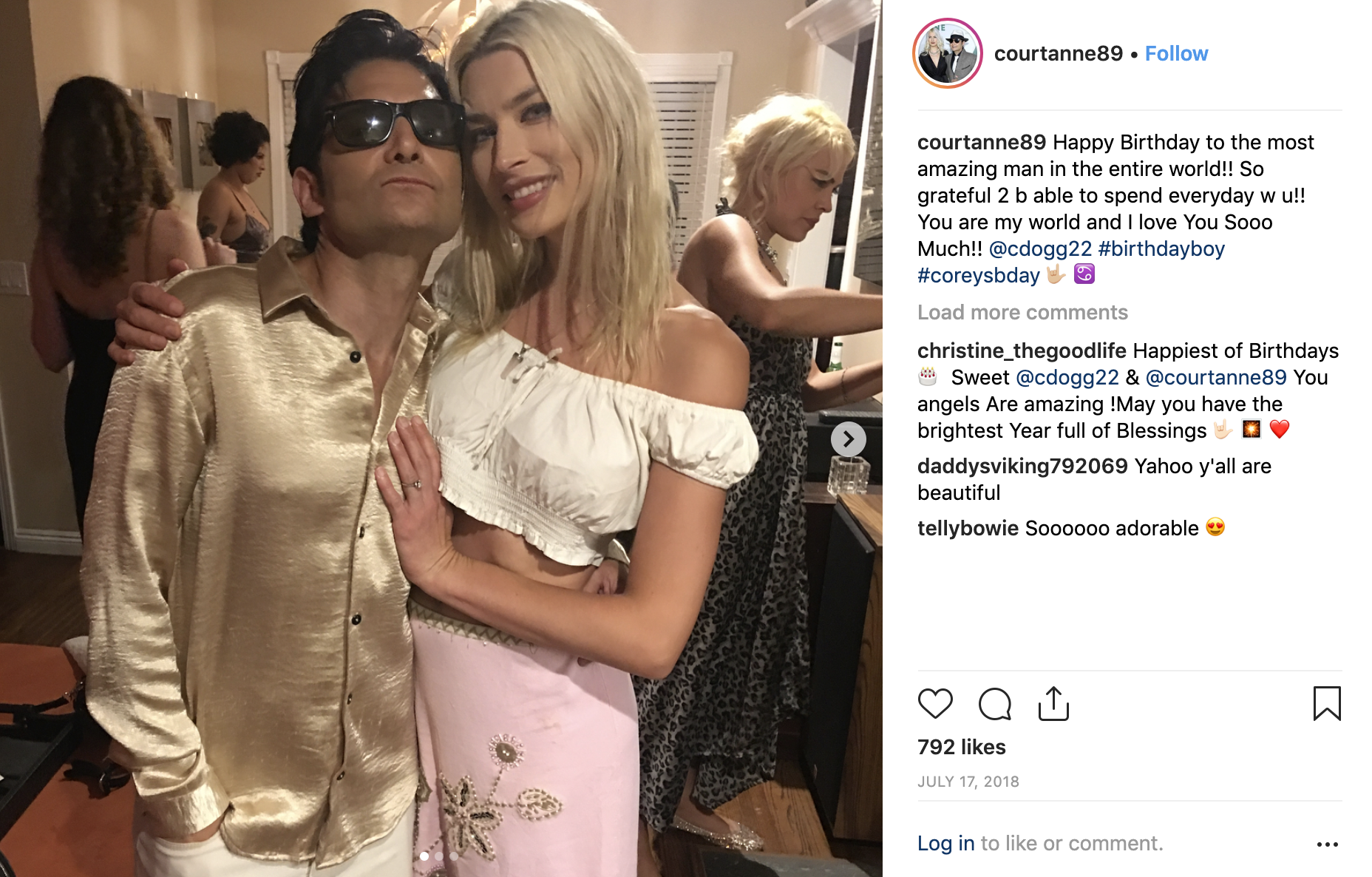 1. Courtney Anne Mitchell is the DJ and keyboard player in Feldman's band

According to the inputs on the Instagram page of Courtney Anne Mitchell, she is the keyboard player and DJ in Corey Feldman's band, 'Corey Feldman and the Angels'. The band had an unfortunate and infamous performance in 'The Today Show' and Feldman and Mitchell were found defending themselves on Facebook. He said, “We just wanted to tell everybody that, like, it’s been really painful. We put ourselves out there and we did the best that we could. And, like, I’ve never had such mean things said about me. Like constantly. On being asked about having kids with his wife, Corey said, "Courtney is young and she has a career in modeling and music, she would rather keep her body in good shape for now. She’s getting good practice with Zen.”

2. Corey's wife admitted in an interview on having hot sex on a motorcycle

Courtney Anne Mitchell was photographed for the Playboy Magazine in the year 2011. She is referred to as coed in the interview. She also admits to having 'hot sex' on a motorcycle and also admits to getting 'down' and 'dirty' in a college restroom. She is from Vancouver. She states that she met her husband Corey Feldman at a Midsummer's Night Dream party at the Playboy Mansion where she was invited after doing the shoot.

Mitchell has also been photographed by Sports Illustrated's Brian Hayes and Playboy's David Mecey. In her Facebook biography, she also mentions that she studied at London's Ministry of Sound to become a DJ. Her modeling career began at a tender age of 10 when she was photographed for Sears. Feldman praises his wife in an interview, “Her versatile skill set, along with her positive attitude and work ethic, has allowed her to continue working with the industry’s top directors and photographers.” Feldman said in an interview that before he met his wife, he was a bit of a playboy.

He also added, "A lot of girls I was dating, you know, were all kind of telling me the same thing which is like, hey, I have this passion for art, or, you know, I’m a musician, I’m a singer, I’m an actress. But a lot of them were selling themselves short. They were going and trying to do Playboy, and that was their biggest goal – to be a kind of glam girl, T&A model, that type of stuff.” Feldman later added that Mitchell was his “No. 1 partner.” 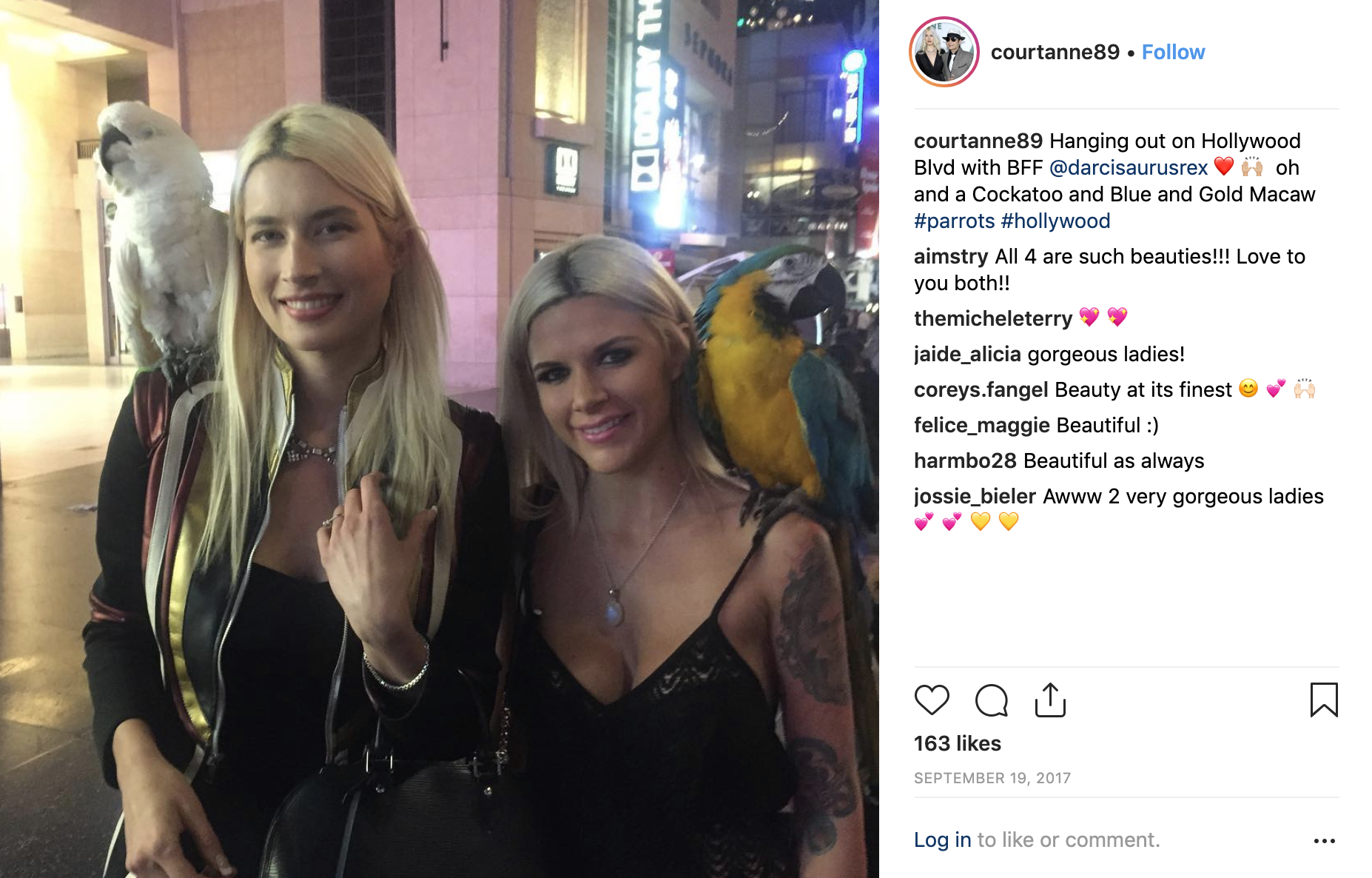 3. Their wedding was officiated by the Creator of Showtime's Gigolos

Courtney Anne Mitchell and Corey Feldman got engaged after Trump's victory in America in the early November. They were celebrating their fourth anniversary at that time. Feldman described his proposal saying: "I was, of course, a bit nervous, as any man will admit, you never truly know what a woman is thinking. So as much as I assumed she would be happy and say “yes,” there’s always that insecure part of my brain that regresses immediately to my childhood and thought maybe not".

He continues, "So I kinda chickened out and did a written proposal by writing a note with two check boxes, one for yes and the other for no. Of course there was a ring in there with the note. Luckily she said, “Yes!” He further describes the scene saying,"She was very surprised, excited and started crying. She was surprised because we had both been so anti-marriage since we met." Their wedding was officiated by the Creator Showtime's Gigolos Marklen Kennedy. Just prior to the wedding, the couple was busy attending bachelor parties at the famous Chateau Nightclub in Las Vegas.

Feldman told People's magazine that, "We are planning a small, secret wedding just for family, very soon. We will likely have a big public wedding for friends and media to attend within a year.” Corey Feldman was seen wearing a Pierce Ross tuxedo and the bride was dressed in a stunning Shail K. gown. Courtney Anne Mitchell is a vegan and often posts photos of vegan dishes on her Instagram page. Their wedding cake was also of a vegan variety.

Mitchell if often found posting several quotes and images on her Instagram page including some famous African proverbs and bible verses which refer to her spirituality. She is a very spiritual person. She also happens to be a vegan and a nutritional coach. Her husband refers to her as being her angel and she takes it very seriously. Courtney Anne Mitchell also calls herself as the 'servant of God'and also encourages her fans to do good in the world. She also is thankful for the universe for gifting 'Cory' in her life and bringing some wonderful people in her life.

5. The net worth of Corey and Mitchell

The recent net worth of Corey is calculated to be $2 million. He earns his income through his singing and acting career. Until a few years ago, his net worth was $3 million but due to some financial losses and some ups and downs, his net worth came to $2 million as of now. The net worth of Mitchell cannot be calculated as of now as she is still new to the industry. The height of Mitchell is 1.78 m. Her height is much more as compared to her husband. Corey has a height of 1.65 m only. Together when they stand, Mitchell appears much taller with a considerable height difference between both.

She is a big supporter of her husband movies. She is currently supporting the movie 'Fundraising efforts'. Corey is trying to collect a total of $10 million to finance his movie against child abuse. The funds for his movie have reached a total of %200,000 so far. Although some have been found saying that he does not need $10 million to do the movie there have been mixed reviews so far.