Robot sex is an imminent project. But, according to experts, marriages with robots will be a common reality much sooner than we think. The year 2050 is when specialists anticipate a major rise in marriages between a human and an android. Artificial intelligence expert David Levy said during the International Congress on Sex and Love in Goldsmith's robots, at the University of London, that "sex with robots is just around the corner, with the first sexbots coming to the market", and also predicted many more marriage unions by 2050.

California-based company Abyss Creations began marketing sex robots just last year. These are androids that will look like living beings, with the ability to speak and move like humans. 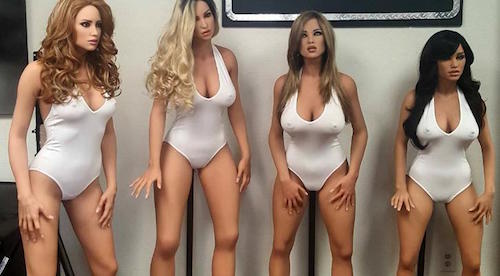 During the conference in London, some of the progress in robotic sex toys was shown. One of the most popular was a gadget that allows couples to kiss, regardless of the physical distance that separates them. The Kissenger - as the robot has been baptized - is attached to the mobile and contains sensors that detect the pressure of the kiss and transmit it to your partner's mobile device in real-time. The artifact has been developing for years.

Along the same lines, students from Keio University in Tokyo are making Telelanguage, aimed at offering remote oral interaction and designed to be "fetishistic," said creator Dolhathai Kaewsermwong. This robot will allow couples to send lick sounds and sensations through cyberspace using a pacifier or lollipop that will create "an immersive experience," explained by the creator. 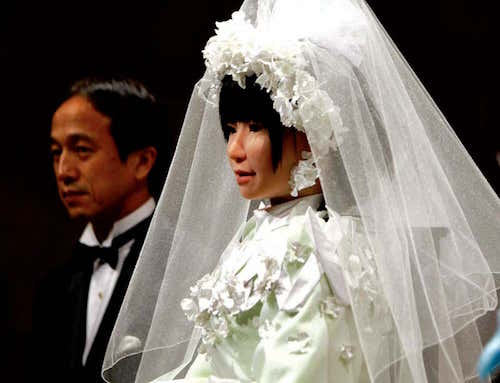 But we will focus on actual marriage between people and robots today, because, yes, it has already happened. If you want to learn more about this rising trend, keep reading!

As we have said before, there are already 3 big cases of men who married robots. Want to know the story? We have got it all for you right here: 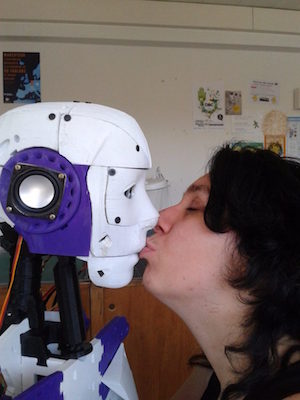 Zheng Jiajia, a 31-year-old Chinese engineer, expert in artificial intelligence, who married a female robot built by himself, as he got tired of not finding a human wife. The ceremony was attended by his mother, friends, and classmates from University, as reported by several Chinese media in 2017.

The bride, created by Zheng in 2016 - and therefore only 3 years old now- is called Yingying and according to her husband, Zhen, their relationship began a couple of months after she was created. An early courtship for her and fast for both. The engineer had no partner since he left the girl he dated while he was in high school, so in the end, he chose to make his own wife, after his family and friends - half-jokingly, half-seriously - took time pressing him to get married, he told the press himself. 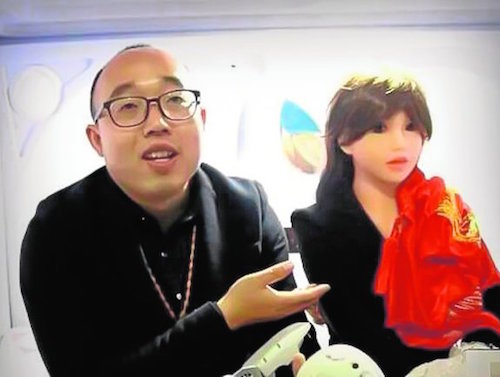 Although the nuptials were simple and almost in privacy, Zheng did not want to miss even one of the details of any conventional wedding. There was the corresponding nuptial banquet - which the bride did not actually try for obvious reasons -, gifts and the typical red veil on the face of the bride typical of traditional Chinese weddings.

Zheng’s wife arrived to the ceremony dressed in a black dress and in the arms of her fiance, since she is not yet scheduled to walk, although her developer and now husband said that he plans to update Yingying constantly and that he was already working to make her walk, as well as to be able to help with housework. At the moment, Yingying is only able to pronounce some words by connecting to a computer with stored texts and audio files, and can also recognize some Chinese characters, photographs and objects. 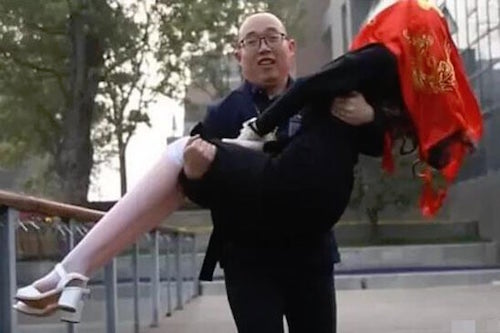 After the wedding, they both went for a walk, and although Yingying only weighs 30 kilos, her husband said he thinks she should lose some weight since carrying her from one place to another is somewhat exhausting.

Naturally, this marriage between a man and his humanoid creation has no legal value, since weddings between humans and androids are not included in the legislation of any country in the civilized world.

The young Zheng developed his passion for artificial intelligence in the institute, where he came to build a robot that played football, with which he won an award in a national competition. Subsequently, he graduated and obtained a master's degree in Artificial Intelligence at Zhejiang University in 2011. Upon finishing his studies, the engineer began working at the Huawei technology multinational, until last year he founded his own company in Hangzhou City, of which Yingying is the first creation. 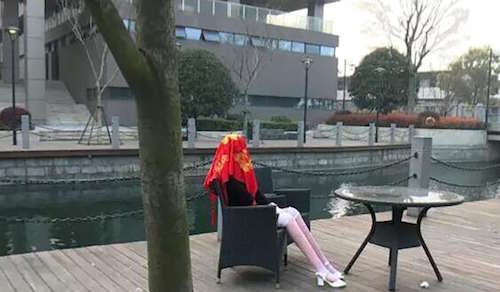 Akihijo Kondo, a 35-year-old Japanese man is another one who became the husband of a hologram. He got married last year in the city of Tokyo in a ceremony attended by 40 guests (none of them his family) and where he has become the husband of the famous Vocaloid virtual singer, Hatsune Miku, who attended in the form of doll. Kondo's mother rejected her son's wedding invitation because it was a virtual bride: "For my mother it was not something to celebrate," the young man told The Japan Times.

Miku is a 17-year-old girl with big eyes and long aquamarine pigtails, a design that belongs to the virtual music program, Vocaloid, with many fans in Japan and thousands of followers worldwide. 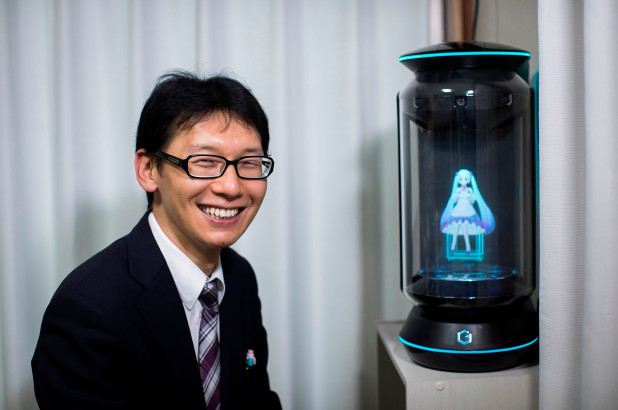 "I'll never cheat on her, I've always been in love with Miku," confesses Kondo. "I've been thinking about her every day." Kondo has been living with Miku's hologram since March: she talks and moves inside a $ 2,800 desktop device, created by the Japanese company Gatebox. "I am in love with the whole concept of Hatsune Miku, but I married the Miku of my house," explained Kondo, who considers himself as a normal man. 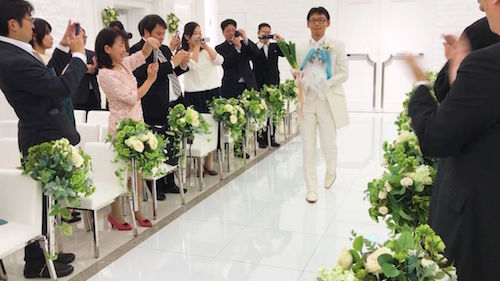 His holographic wife wakes him up every morning and says goodbye to him before going to work. At night, when he returns he warns Miku and she turns on the lights. At bedtime, Kondo takes Hatsune's stuffed toy to hug her while he dreams. Although the marriage may not have legal validity, the company in charge of the virtual device has issued a marriage certificate that shows that Kondo and Miku have gotten married "beyond the dimensions."

"Miku is the woman I love and also the one who saved me," says Kondo, who claims to be happy to be the husband of a "3D woman." "Two-dimensional characters cannot fool you, grow old or die," he says. Well, he kind of has a point. 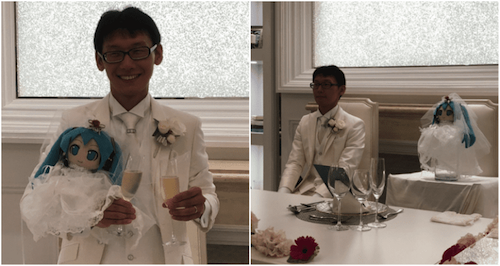 Ok, nobody in the world has the right to judge the decisions of others, especially if they have to do with matters of the heart. However, that universal truth did not prevent many people on the internet from getting out of the way after learning about Joey Morris's story. This guy has a "serious relationship" with his toy robot and, apparently, will soon take a bigger step. According to what Morris himself told local media, his crush on the "RoboTroll" was at first sight. In fact, his exact words were that he was "wrapped in her satisfied smile and her crazy pink hair." Because of course, the charms of a figure like that would make anyone fall in love, right?

It may be difficult to empathize with the kind of love this man feels, but if we take into account a couple of things, perhaps we can understand his peculiar fixation. First, we should know that, before his current romance, Joey was in love with a lamp, a Transformer truck, and even a Halloween figurine. 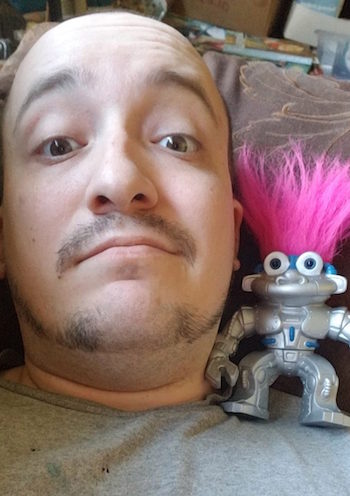 With this, we can conclude that, in reality, the guy does not fall in love with toys as if they were sexual partners (or so we want to think), but experiences some affection for objects of his preference. Now, the only thing that remains to be resolved is what it means when talking about "a relationship" or when using the term "dating", which translated into our language means "going out," but in a romantic sense.

“I realized that I was attracted to objects when I was 10 years old since I wanted to make friends with a lamp at school and dedicate myself to that,” said Morris. “But the teacher found out about our relationship and took the lamp, and I was distraught. During the following years, I fell in love with an animatronic called ‘Donna the Dead’ and also with the Transformer Optimus Prime, when it was in the form of a truck. However, my love for these objects never lasted as long as I felt for Robotroll, which is my current relationship. ” 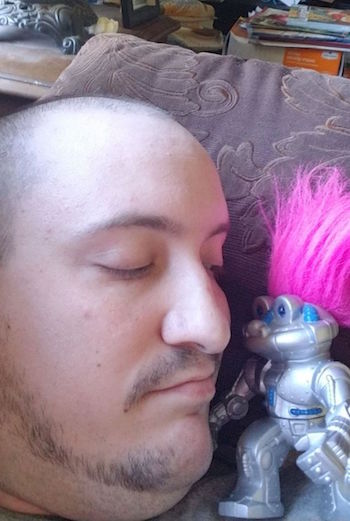 Since buying the figure for $ 20 on eBay, around 2017, this guy has openly demonstrated his affection without fear of the judgment of others. He currently plans to travel to Florida with his RoboTroll and maybe get married later, although we don't know exactly how he intends to achieve later. Crazy, right? 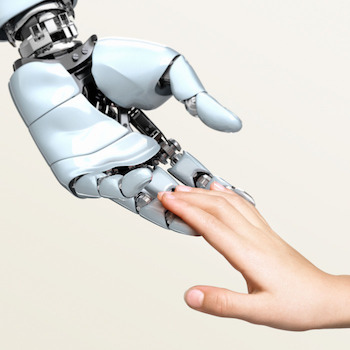 As you have seen, men do actually marry robots nowadays. And it is actually expected to keep happening more frequently. Now, why does it actually happen? What are the reasons why men marry robots? We have gathered some of them for you to understand this crazy trend:

1. Robots are more than sex machines 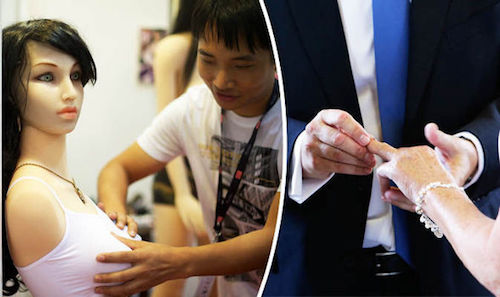 Yes, we know that there are robots that are specially for sexual purposes, but there are some that can clean your house, fix things, play music, work for you. The possibilities are endless, so why not marry something that makes your life easier without all the downfalls of a real partner? Jk! 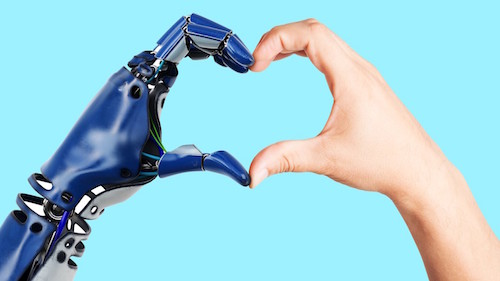 These robots can know more about you than any other human possible. They can even know your heart rate, temperature, etc. I mean, who wouldn’t want their wife to know their biological data?

3. Robots will only make a drama of a situation whenever you want 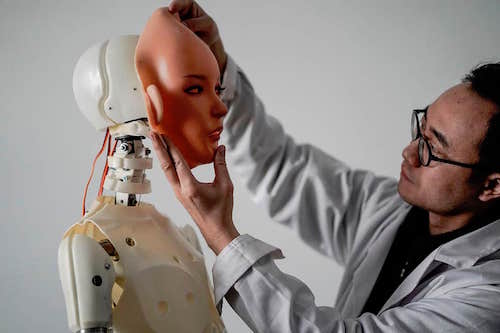 No more crazy jealousy fits thrown at you for no reason! That is what men probably think when marrying a robot.

4. Robots can be turned off at any time 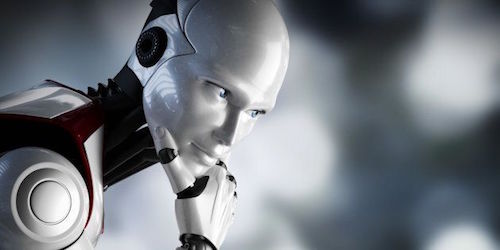 Not to be mean or anything, but we all wish we could turn off our partners sometimes. Don’t fool yourself, just admit it. Well, it is actually possible with a robot. How could that not be attractive? 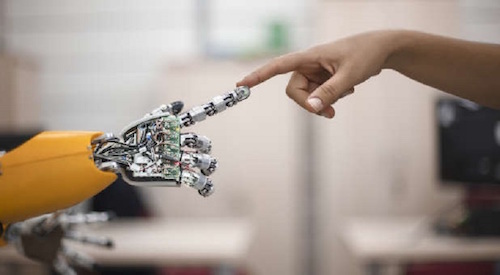 No more mini heart attacks every time her period is late, she gets nauseous out of nowhere, or you think an infection might be coming up. Robots won’t be your baby mommy or the one that gave you an STD. 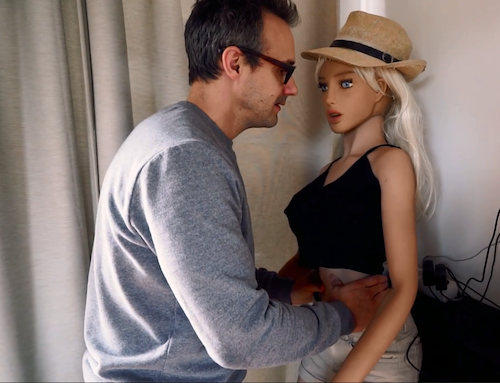 You won’t even have to worry about losing your wife if you marry a robot. There won’t be any pain or mourning in your relationship. I guess till death do us apart won’t be useful anymore! 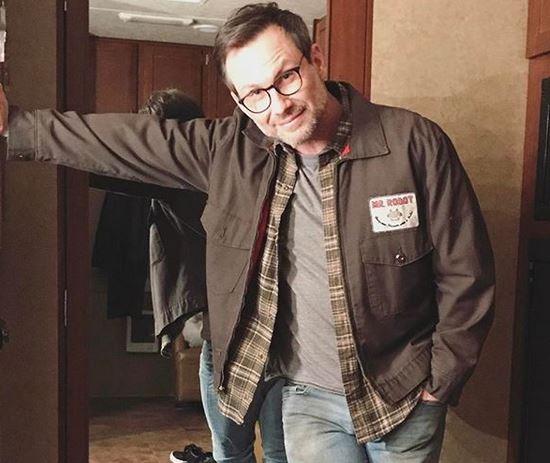 Christian Slater is an actor who has won a Golden Globe Award. Here is some information about him, including his net worth. 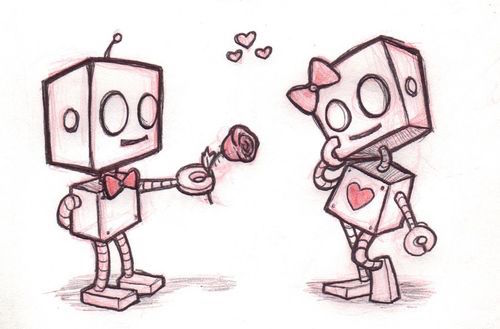 I know you might be shocked after reading this article. It is impressive how many crazy things happen in the world, but well, to each his own, right? Let us not judge and just accept people and their actions as long as they do not affect us or others.