Marriage is a beautiful time for you and your #love, a time to be happy and goofy and just let down your hair because you just did one of the most important mandates to humankind. Live and fall in love. Hopefully, your marriage is the fun type where you can share jokes and hilariously witty stuff with one another. 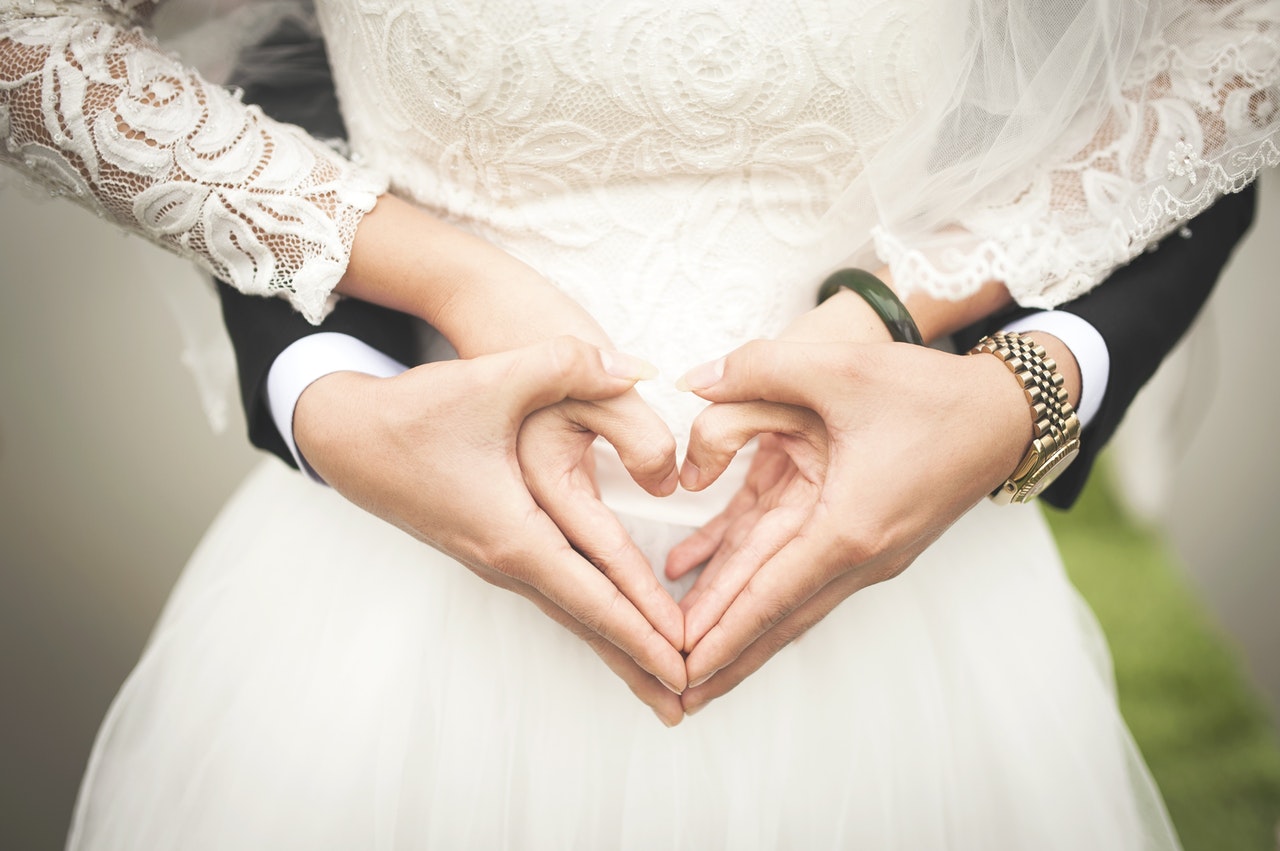 If you and your partner like finding the hilarious side of this institution then we got you covered with some of the funniest, cutest and most awww quotes that will have you cracking your ribs and falling all over again because you deserve to find laughter and love at the same time.

Let's kick things off with this super cute, unintentionally funny quote-because that's not the correct meaning of the word marriage, but who cares about that when you can actually have it framed and put in a place of honor around your home. It rings true, that the person you marry is your favorite weirdo. 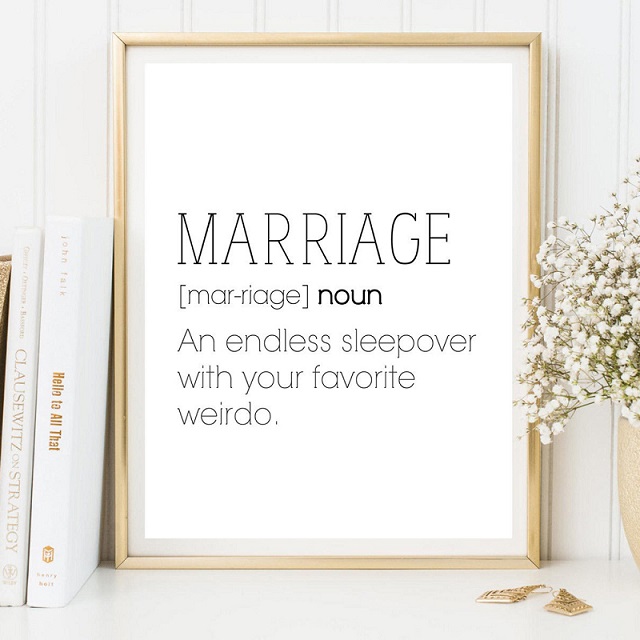 Very few things come on top of the love for food among the animal kingdom and personally, I might like food more than I like you but if you can get me to feel just as good as seeing a steaming plate of my favourite dishes, you can rest assured that we're in it for the long haul. Send this to your spouse so they can know just how much you mean to them and why you recently said 'I do'. 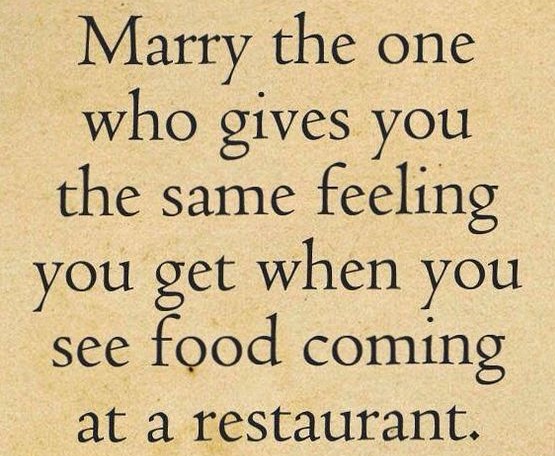 Technically this is not a quote but it is so funny we couldn't help ourselves. This is what marriage looks like, well, any relationship really that requires you putting up with someone and sometimes you want to feel good making faces behind their backs. 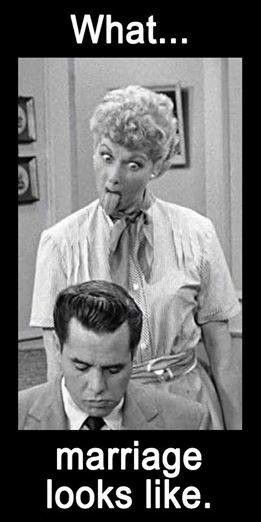 This is so adorable reminding your partner just how much you love them no matter how annoying they have been. Marriage is about the little things, newly wedded or not. You can annoy the living daylights out of each other but still be the cutest couple living on the planet right now. 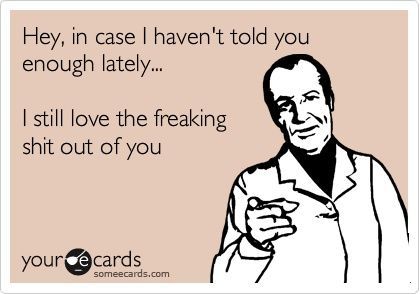 We love our husbands but they are annoying 99% of the time and sometimes we just want school them just a little bit. Relax and have a good time with these top funny husband quotes.

Dear husbands, a quote from a very wise person that speaks directly to you. Your wife made a choice to be with you and if you find it funny that she's made a few other choices that you deem not ideal, remember that she chose you too, so joke's on you. 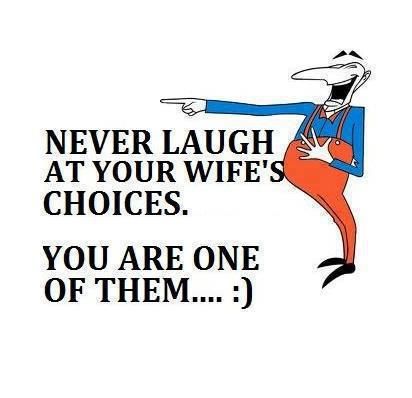 Probably the oldest saying in the book of marriage. This quote is old gold and we don't have much to say about it except... Men, I hope you're smart enough to follow the rule of life #1. 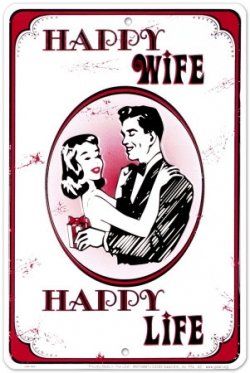 ... Is a woman that makes him look good and generally controls everything he does. Who's really the boss in the house, you ask? Well, you might wear the pants but I pick them out and we'll let you figure out who's truly in charge here. 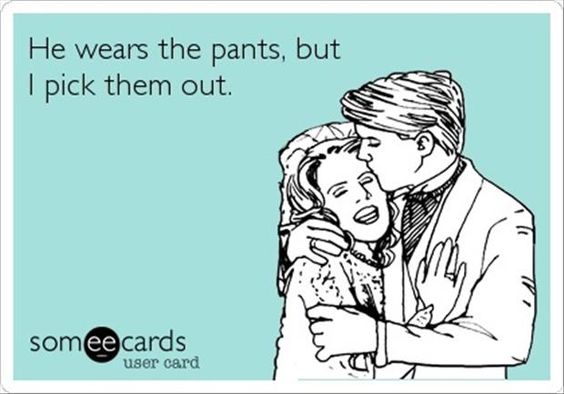 Men are from Mars, so they can never truly understand a woman so here we'll decode a few things for peace's sakes. First, if she tells you to do what you want, she actually means, do the thing she wanted you to do in the first place before you decided to become hard headed. 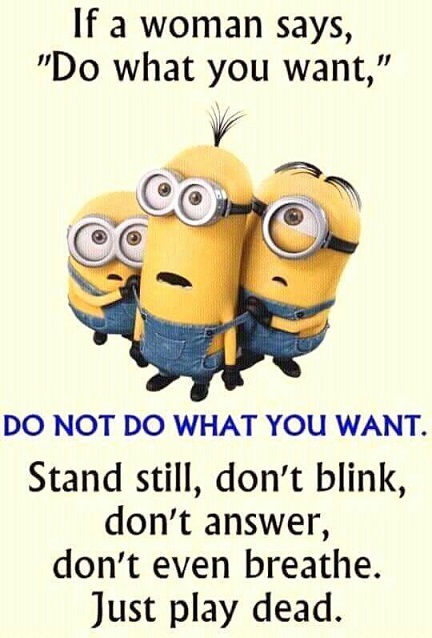 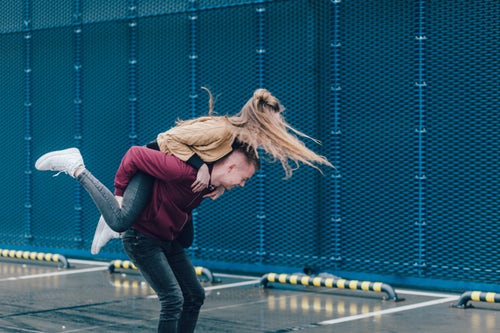 The social media phenomenon term relationship goals as something we may never hear the end of but hopefully aim for while in a relationship.

If you've been married for quite a while then kudos to you guys. Marriage is not easy but it sure is hilarious mostly because the more you continue, the more you realize that up is down and down is up.

And what better way to celebrate what you'd otherwise consider flaws to drive you insane from each other than to make light and laugh a little at the situation?

Woody Allen once said a truth about marriage that rings so true and all of us enjoying the married way will agree... The wife is the decision maker. If you ever look at the majority of marriages that really work in today's world. 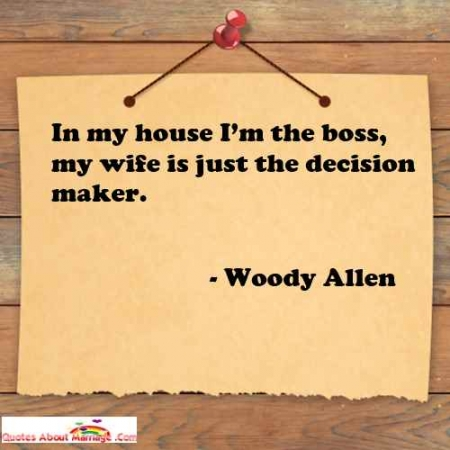 quote courtesy of quotes About Marriage.com

Women, am I right or am I right? If our men would just pick up the slack in cleaning every once in a while, no one would find the time to argue with them. We'd probably be too busy checking out their form while sipping on a glass of while and telling them they missed a spot just so they can do it all over again... and then later we'd reward them for the hard work they put in today... Do you know that song, Work from home? Just saying 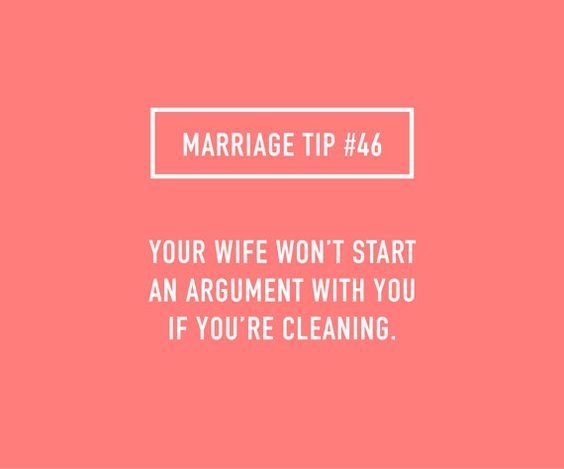 Chinese fortune cookies have always been a favourite because of all the wisdom they spew- I would really like to meet the person behind them- and some it concerns your marriage. Imagine breaking your cookie and then running into this truth bomb about your marriage... I'd probably hang it up or something. 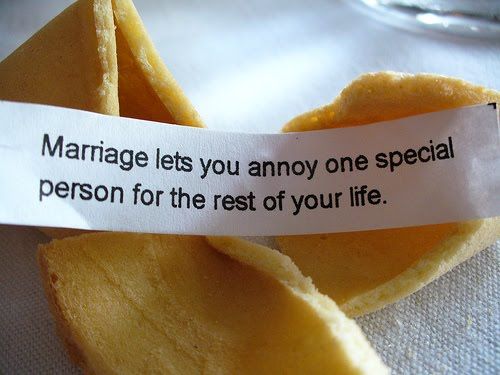 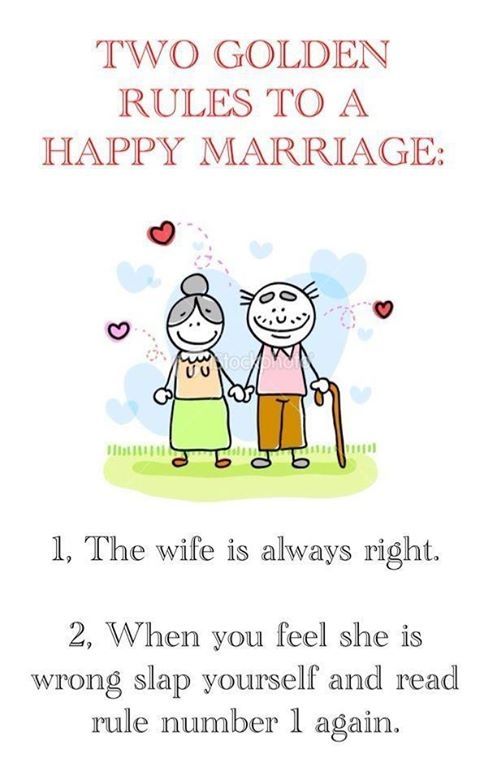 If your anniversary is coming up, first of all, congratulations for lasting +1 year... Celebrate your special day with some of these specially collected quotes for you.

Love is spending year after year with a human being you can barely stand but life sucks without them so you kinda keep the marriage going so they can keep being annoying. On this note, a toast, to you and your partner for sticking it out and crossing off one more year to your life together. 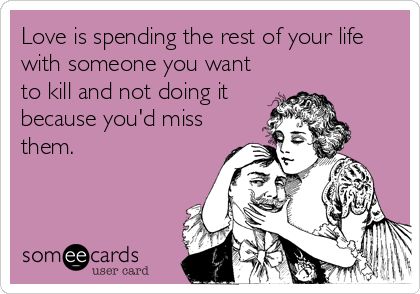 You know you've thought about it... Just smothering him with a pillow and getting rid of his annoying ass but somehow you don't do it. You deserve to celebrate yourself as well for achieving this near-impossible feat. Cheers! 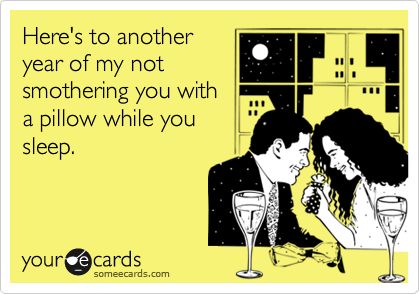 15. Survival for the fittest

He's annoying and he pulls some things that have you questioning his sanity or how mature he is. For all the childish behaviour you have to put up with on a daily basis, for cleaning up after your big manchild and keeping him healthy and well fed, you should give yourself a pat on the back and maybe toast yourself with a bottle of wine or two. 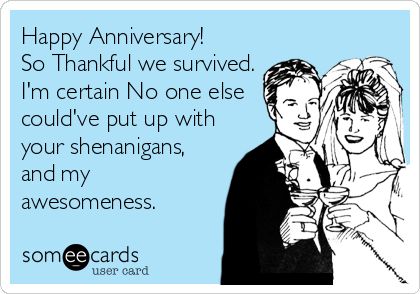 How many divorces go through in a year, the numbers are in the higher percentile. Celebrating an anniversary is a pretty big deal and you can take a moment to enjoy the fact that you made it, still going strong. Still loving this human being despite all their flaws and they love you in return. 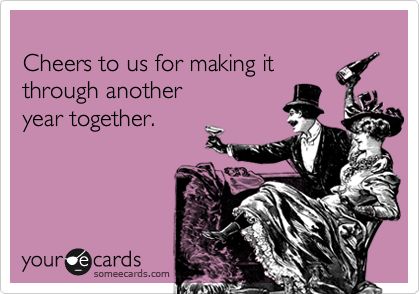 Life before marriage is very different from life after marriage... Things change, people change because they get comfortable and what better way to illustrate this change other than using a series of insanely funny quotes that are a perfect representation of what your life after marriage turned out be.

Do you remember when you said I do and it was the best moment of your life, and everything was so perfect because a day you and your partner had worked so hard for was finally at hand? Fast forward to the married life and you're North and he's South. You literally cannot agree on anything and it pisses you the hell off but you chose each other so, gotta stick with it. 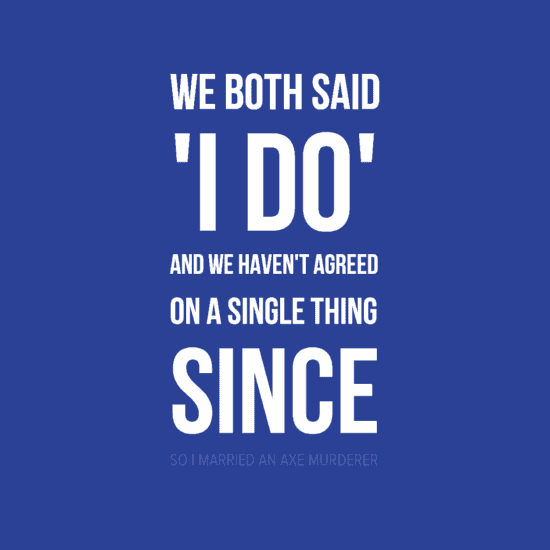 There's no need to lie, girls especially act like two completely different people in the same body before and after marriage. We get it, you're selling the 'best' parts of you to this poor unsuspecting boy so he can give his heart and pop the question and then you can just go back be being your slob self and surprise the shit out of him and leave him wondering if an alien came in the middle of the night and exchanged his lovely wife for an alien doppelganger that is out to destroy you. 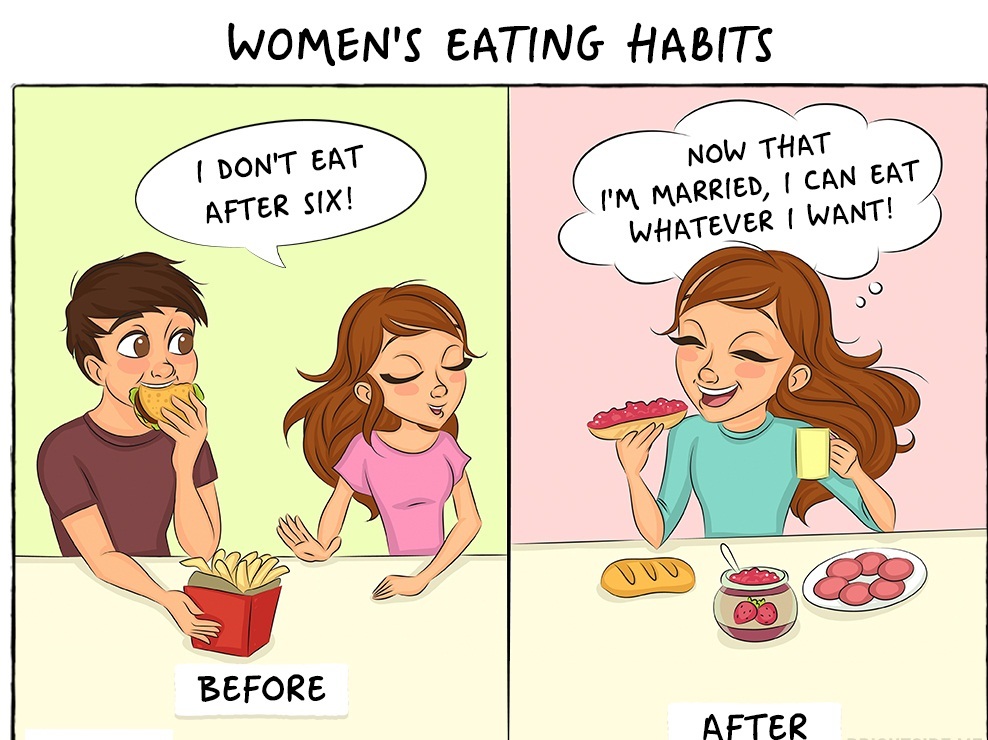 Remember how much sex you used to have while you were dating and now you think about how much sex you've had in the last 2 years and the digits on your one hand are too many. There's just a thing about marriage limiting the number of time you have sex, which is funny because don't we get married for the purpose of legalizing our sexual activities? 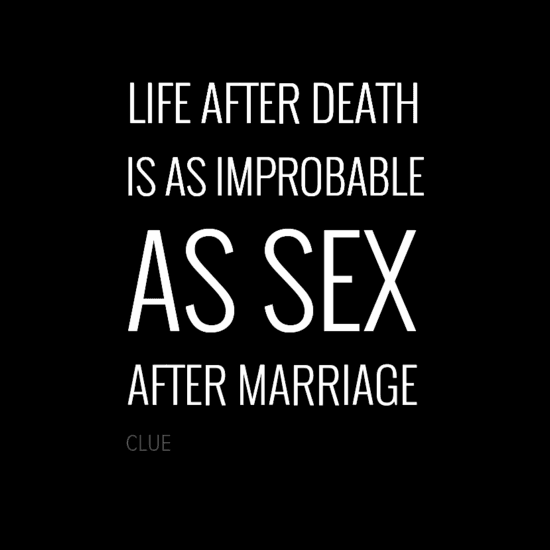 There's not much I want to say about this... All I can say is to make sure you fully enjoy your dating life before you get married because it all changes. It might be the love of your life but marriage has a way of carving its own way! 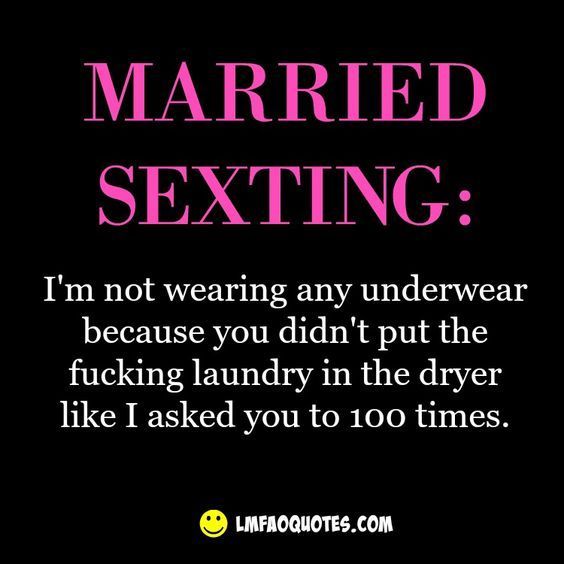 Marriage doesn't have to be just about the seriously serious stuff.. you can take a moment to breathe and enjoy life together including the annoying with a touch of humour to lighten up your marriage and give each other a new perspective into the wonderful cogwheel that is marriage. 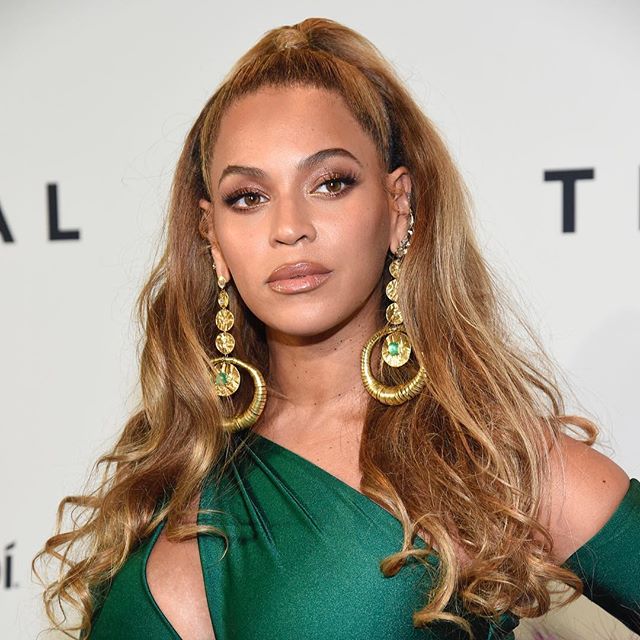 JayZ and Beyonce are Hip Hop Royalty, making them an equivalent of the royal family to America.