What Is An Emotional Affair?

Since marriage is an institution that, to function properly, requires both partners to coordinate with each other, an emotional affair proves to be a major disruption that could, in extreme cases, lead to the breakdown of a marriage. Since one partner feels closer to somebody outside the circle of marriage, their relationship with their spouse becomes dysfunctional and out of sync. Things get worse if the partners in an emotional affair start developing some sort of chemistry between them, however, that isn’t always the case.

Having said that, many people who engage in emotional affairs feel like they’ve committed nothing wrong since they’ve not engaged in sexual encounters with the person they’re having the affair with, and since their relationship doesn’t involve sex, it isn’t technically considered cheating. However, their spouses may not share the same viewpoints as them since many emotional affairs have led to marital breakdowns. When an individual finds out that their partner has been involved in an emotional affair, they consider it a form of betrayal.

How Does An Emotional Affair Start?

Unlike a traditional extramarital affair, an emotional affair doesn’t start with intimate glances, exchanging digits under the table, or secret hangouts, instead it can happen right in front of one’s unsuspicious partner. Starting as a simple platonic friendship, an emotional affair is almost… sneaky. Even the individuals involved in an emotional affair might not realize it developing. All it takes is one to invest their time and energy into listening and understanding the other person’s problems, whether they are related to their marriage, finances, or children. Many married individuals don’t even realize they’re crossing the limits of what should remain behind closed doors. Today, technology has made staying in touch easier than ever before – hence, emotional affairs have become far more prevalent.

What Is The Role Of Technology/Texting In Emotional Affairs?

As technology becomes more user-friendly and cheaper to avail, it’s no surprise that there has been a steady growth in the number of emotional affairs worldwide. As we mentioned before, emotional affairs can start right under your partner’s nose – all it takes is a couple of texts, maybe some emojis, and if you’re feeling adventurous, perhaps some GIFs to get you started.

Over time, you develop a close connection with your secret partner, sharing intimate details of your life with them, no matter how far they are – all you need is an up-to-date computer or smartphone, along with a good courier service or a decent internet connection. This newfound virtual intimacy with your secret partner can, ultimately, make you closer to them than you are with your spouse – which in turn leads to serious damage to the stability of your marriage.

Moreover, technology has made it harder to track down whether your partner is having an emotional (or any other kind of) affair thanks to the sense of anonymity provided by apps such as Kik, and messages easily being deleted or achieved in apps such as Snapchat. If you find your partner spending a lot of time on their phone or computer – you better brace yourself.

Is It Safe To Say That An Emotional Affair Is The Same As Cheating?

As we mentioned before, since emotional affairs do not comprise of getting into bed with your secret admirer, a married individual may not consider them as cheating and declare themselves guilt-free. A critical issue they tend to ignore is the indirect effect the emotional affair has on their marriage. Individuals involved in an emotional affair tend to blur the lines between the emotional intimacy their spouse deserves and the basic chit-chat one has with a friend. Once they start giving more attention to their secret partner, the entire sanctity of their marriage falls apart – if they wish to make their marriage work again, they’d have to make a life and death decision: either they’d have to leave their spouse who is the parent of their children or their secret partner that understands them so well on an emotional level.

Another reason why emotional affairs can be considered the same as cheating is that a married individual tends to take more interest in someone else other than their spouse. Your spouse deserves to know if you’re unhappy in the marriage – if you feel like something’s missing or that they’re not satisfying all your needs. A marriage doesn’t have room for three people.  Had you invested the time and the energy you invest in your secret partner on your marriage, perhaps you and your spouse could’ve worked something out to make the marriage work.

What To Do If You Find Out That Your Partner Is Having An Emotional Affair Through Texting?

If you suspect that your spouse is involved in an emotional affair, the easiest way to confirm your suspicions would be to check their smartphone or laptop (we know that everyone has a right to their privacy, but nobody deserved getting betrayed either). Keep an eye out for recent texts, especially with friends of the opposite sex. If you find that some of the text has a more vulnerable nature to them i.e. a chat about how your partner feels like their in-laws are disrespectful to them or how your partner is struggling to meet ends meet to buy a new car, you’re almost there. The cherry on top would be if the texts have a flirtatious nature to them. For example, if your partner and their ‘friend’ tend to use a lot of kisses or hug emojis or if they use pet names for each other for example, “babe”, “baby”, “honey” or “darling” or if they explicitly state “I love you” – we’re sorry but your partner is involved in an emotional affair.

At first, an unsuspecting partner may be confused as to how they should react to such a blow. It’ll be wise to sit down and have a talk with your partner as soon as you can. Think about whether their intentions are still pure and if they’re still worth being forgiven. If yes, hug it all out and vow to always be honest with each other from now on. If you’re unsure, we’d recommend seeking a couple’s therapist – a therapist’s office is a safe place to discuss all your problems. If no, then we’re sorry but either one of you would have to back their bags and file for a divorce.

But before any of that, try simplifying things for yourself – why did this happen? Why is your partner seeking comfort in other people? Chances are, you have a role to play in all this drama as well. When a partner seeks emotional support in other people, it signals to the fact that whoever they are in a relationship with isn’t providing them with enough emotional and moral support. Having said that, try to analyze your actions and your recent conduct with your partner – are you emotionally distant? Do you tend to spend a lot of time away from your partner? If you feel like you are equally guilty, try working things out with your partner – either at home or with a couple’s therapist. 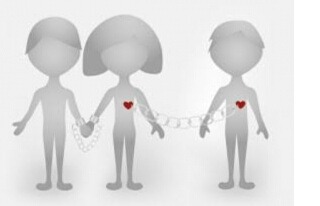 You're talking and sharing details, and you start to wonder: Is this a friendship or an emotional affair? Here are 10 signs it's more insidious than you think.

It is important to keep in mind that no sane person would want to hurt their spouse. Some people lack basic ethics and choose to cheat on their partners ‘for fun’, but most of us aren’t like that. If you find your partner involved in an emotional affair, try understanding things from their perspective as well. Try to find a solution to their problems rather than criticizing them – everybody makes mistakes and every marriage has its set of challenges. It’ll be fruitful of both you and your partner to learn a lesson from all this chaos and vow to communicate more proactively and honestly in the future. No more secrets.